Morgan comes back into Collinwood holding his rope. He sneaks up behind Julia and puts the rope around her neck, choking her. He calls her Constance and tells her it's too late, and that she'll never stop him from seeing Amanda again. Quentin comes in and rescues Julia. He grabs one of the dueling pistols and tells Morgan that he'll use it if he has to. He checks on Julia and confirms that she's still alive. He asks why he tried to kill her. Catherine comes in and Quentin tells her to take care of Julia while he locks Morgan in a room. Morgan tells Catherine that she can tell Constance he'll try again... Quentin leads him upstairs, and Catherine helps Julia up. She says he tried to kill her. 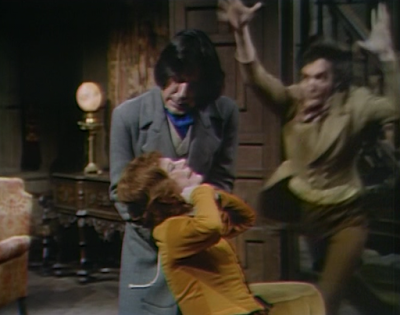 Ben Stokes returns home and Carrie, crying, runs to him and tells him that Morgan has come several times, and each time he's getting worse. She says he's possessed by a man who hated the Collins family. She says she thought he might kill her. Ben sits her down and asks her to tell him the whole story. 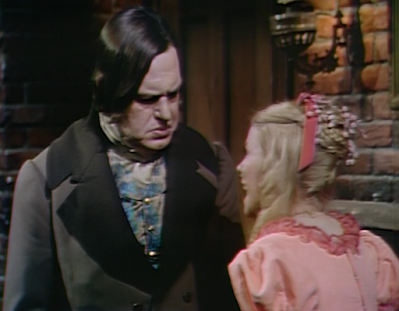 Quentin puts Morgan into a room. He says he's arming the servants, and they have orders to shoot to kill if he tries to escape. Morgan pounds on the door and says that when he gets out, he'll kill any Collins he can get his hands on.

Catherine asks Julia if she's feeling better. Julia thanks her, and she says she should thank Quentin, without whom she might be dead. Catherine asks what they can do about Morgan. Julia says that he's as dangerous as Gabriel. Quentin comes in and says there's still hope for Morgan. He asks Julia who Constance is. She explains that she was Brutus' sister. He says that before the possession, Morgan was alright. He thinks the spirit of James Forsythe is back in his own time, reliving those events. He says they have to exorcise Forsythe, after which Morgan will be normal if they succeed. He says they have to hold a seance. Catherine and Julia agree. 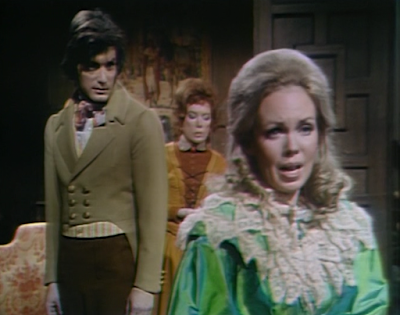 Quentin says he'll get Carrie Stokes to be a medium, and as he leaves to get her, Ben Stokes arrives at Collinwood. He asks where Morgan is, telling Quentin that he wants to kill him. He says he doesn't want anyone frightening his daughter, and demands to see Morgan. Quentin says he's under lock and key, and asks Ben to speak with him in the drawing room. Quentin tells Ben that Morgan would never harm anyone. He says that he isn't the one to frighten Carrie. Ben says that's what Carrie said. Quentin says that Morgan is possessed, and they need to hold a seance to exorcise the spirit. He adds that they need Carrie's gift to help Morgan. Ben says she'll be scared. Quentin promises that nothing will harm her.  Ben says he'll ask her, but she'll have to make up her own mind. They leave together to go speak with her. 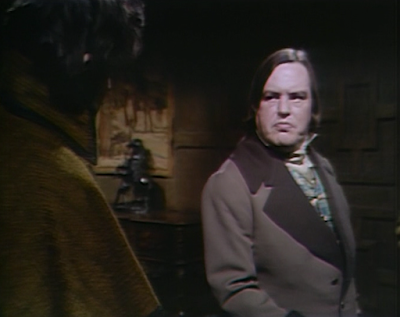 Catherine comes downstairs and finds Julia in the drawing room. She asks about Morgan. Catherine says she didn't go in, but she heard him moving around in the room. Quentin returns and says that Carrie is coming, and that there will be one more person in the room — Morgan. Julia says that's impossible. Quentin says they'll have to bring him against his will. He takes them into the study.

Catherine comes into Morgan's room. She tells him that she's there to help him, because they share a common goal. She says they both want Constance dead. She says if he agrees, she'll set him free. He asks if she'll let him out if he agrees to kill Contsance. She says yes, and he agrees. She offers him a drink to celebrate, and adds something to it before handing it to him. They toast and drink. Morgan asks when he can get out, and she says some time tomorrow morning. He collapses to the ground, and opens the door so they can get Morgan downstairs. 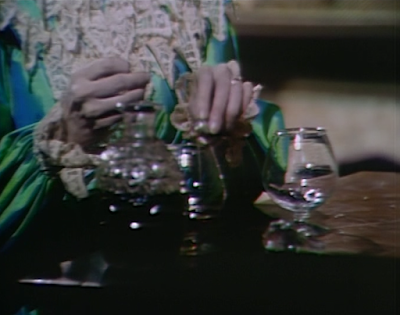 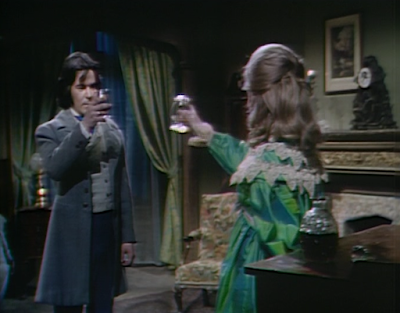 In the drawing room, Quentin explains that Morgan is unconscious. Carrie asks him what he wants her to do. Quentin says he wants her to contact James Forsythe so they can exorcise him from Morgan. Carrie agrees. Catherine, Julia, Quentin, Ben, Carrie and an unconscious Morgan sit around the table. Carrie calls for the spirit of James Forsythe. She asks for a sign. Lightning flashes outside. Morgan sits up and asks what she wants of him. He says he is James Forsythe. Carries asks why he possessed Morgan. He explains that he did so to be free again, and to right the wrongs that had been done to him. He then says 'he has come to get me again.' Carrie asks who. He says Brutus is in the room. He stands up and says he will not get him. He runs out of the room, and Quentin chases after him. Julia checks upstairs for him. Catherine tells Ben that Carrie will be alright, and he escorts her out of the house. 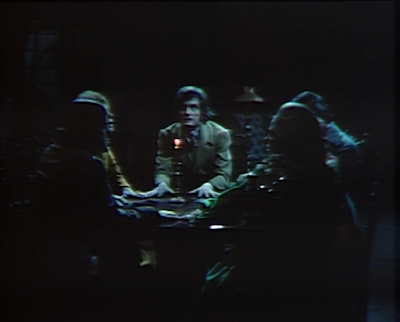 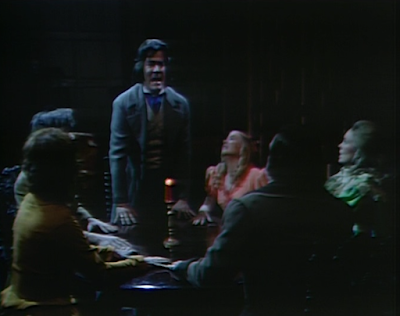 Julia hears Morgan calling. She finds him and he says he's Forsythe, and Brutus is here, trying to send him back to the tomb He tells her that she must hear the truth of the curse, and what happened in 1680. She begs him to tell her. He says that Brutus is here. He shouts that he will tell the truth about the curse. 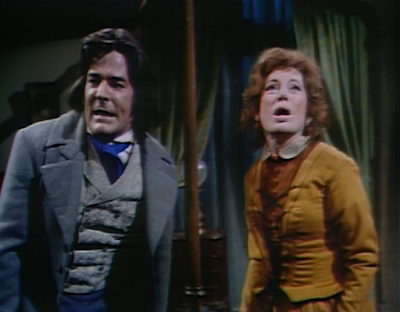 John: Quentin's tough guy act lost a little weight when he backed into the open door... Of course that gaffe was immediately topped when Morgan calls out how he's going to kill every 'Morgan' he can get his hands on!
Christine: This show continues to deliver top notch entertainment, because I enjoyed that immensely!
John: I love when the crew started closing all of the doors before they kicked off the the seance! I guess those were supposed to be the 'servants' that are oft-mentioned and yet rarely seen... Oh well, at least they gave us one more (could it be our last) chance to break out the Seance tracker! 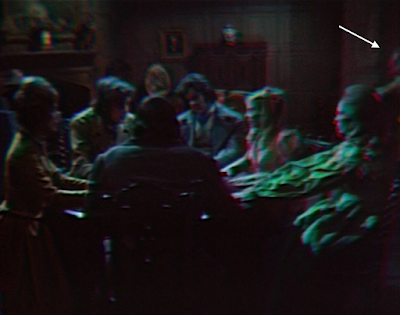 Christine: I love that we got Ben Stokes back today with a trendy hairstyle.
John: Why waste time telling us about the curse, when you can use a possessed body to tell another spirit that you're about to tell the truth about the curse! How much do you want to bet that we won't find out about the curse on Monday, either?
Christine: I had the same thought, but then it occurred to me that this may be one of those times they will surprise us. At this point in the show, they were probably desperate to have folks come back on Monday to find out, and didn't want to risk losing them by not delivering.
Dark Shadows Before I Die Séance Tracker
Episode 170/171: Dr. Peter Guthrie conducts; Carolyn, Vicki, Roger, Laura Collins participate; Josette speaks through Vicki in French; held in the drawing room at Collinwood

This was David Selby's final episode as Quentin, he was forced to leave due to appendicitis.