Vicki is in a trance, and Carolyn repeatedly asks who she is. She says she must run, and tells them not to stop her. Everyone intently watches. She describes the rocks beneath her feet. She then describes being chased by someone, saying that he's getting closer. Liz wants them to stop, but Barnabas says she's not suffering. Vicki then describes the cliffs as her only escape. Liz says she knows what's happening. Carolyn asks who is chasing her, and Vicki says she has to jump. Liz says she's Josette, and Barnabas stopped her, saying he couldn't let her go through that death again. Carolyn says she was just about to tell them who was chasing her. 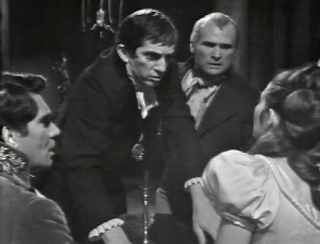 Vicki is now fine, and asks what happened. Carolyn says Josette was here. Roger says she was reliving the moments before her death. Carolyn asks if she was trying to tell them something and Barnabas dismisses that. Vicki suggests that maybe Josette was trying to warn them of something. She says that she hasn't forgotten what happened to Maggie. Barnabas reminds her that those things are unrelated. Vicki goes to get some fresh air and notices a little girl at the top of the stairs. 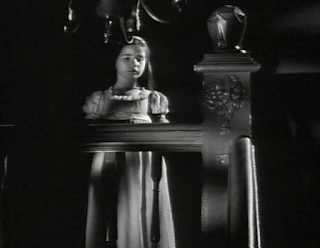 Barnabas asks what she saw, and Vicki says she saw a little girl at the top of the stairs. Barnabas calls out for anyone, and there's no response. Vicki tells Barnabas that she reminded her of the young girl's dress they found in the trunk of clothes. 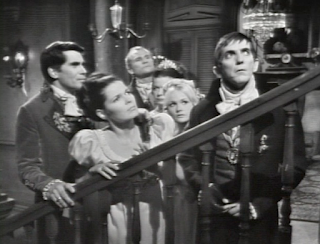 Back home, everyone is still in costume. Liz says she knew it was wrong going to the party in costume. Roger thinks it was exciting, while Carolyn is upset that Barnabas interrupted the seance. Vicki is upset the party ended so early, and that they left Barnabas all alone. Roger jokes about his ancestors suffering, and Liz scolds him for doing so. Everyone but Vicki and Carolyn go up to bed. Carolyn asks if she really saw a little girl at the top of the stairs, and she says she guesses not. 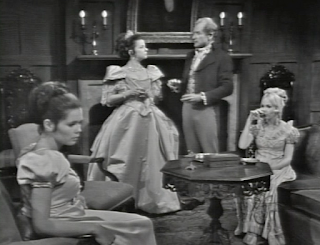 Sarah admires her dress in Josette's room when Barnabas enters. Once in the room, Sarah is gone. He picks up the dress and puts in back into the trunk. He approaches the portrait of Josette, and tells her that he had to send her away again. He tells her that in order to have her, she must be someone from the present. 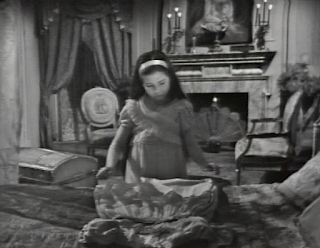 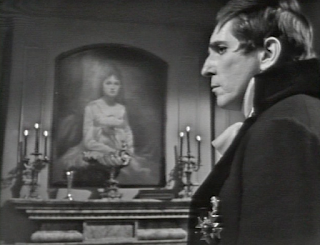 Carolyn tells Vicki that her being at the party with Burke didn't bother her at all. Carolyn goes up to bed and there's a knock at the door. It's Barnabas. He apologizes for coming by so late. He tells her he's there to see her, and she invites him in. He thanks her for coming to the party, and fulfilling the spirit of it. She apologizes for saying she saw a little girl upstairs, and he tells her he doesn't believe in ghosts. He said there were moments when he felt that Josette was truly there, and he's grateful to her for that. He offers her Josette's music box as a gift of gratitude. She takes it and he opens it for her. She's transfixed by the music, and he asks her to please accept it. 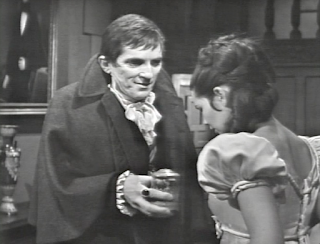 John: Did Josette learn English since the last seance? Last time around, she only spoke French.

Christine: She must have, unless Vicki is putting them on, using details from the story Barnabas told about the night Josette died to make her performance believable. In typical fashion, Josette is unable to convey a straightforward message to warn Vicki that Barnabas wants to make her his vampire bride.

John: Since it didn't start until almost 11pm, how late did Vicki think Barnabas' party would go?

Christine: It's funny that the family goes home and drinks more booze after all they had was wine at the party. Barnabas wants the spirit of Josette to go away, saying he must live in the present, yet still wants Vicki to take on the role of Josette. The guy is truly mental. Now that he's given her the music box, she is on her way to fulfilling his wish. 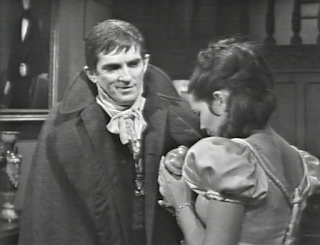 John: I want to know why Sarah has yet to show herself to her older brother. Willie, David and now Vicki were all deemed worthy. Do you think Barnabas might have been involved in her untimely death?

Christine: It could be that she knows what he is. Roger was in fine form being the only attendee who was delighted with the party, seemingly enjoying it all the more because he was the only one who had a good time, and taking morbid delight in the suffering of his ancestors. Roger is a lot of fun when he is being witty.

It'd funny to see Roger becoming the life of the party. But from what little I know of Louis Edmonds himself, he was pretty much like that.