On Victoria's first night in Collinwood, Elizabeth stops her brother Roger from entering her room. He claims he only wanted to ask her about Burke Devlin. It soon becomes clear that Burke may have returned specifically to harm Roger. Carolyn overhears the two arguing and also wants to know more about Burke Devlin. Convinced that Victoria may know more, Carolyn is sent up to get her.

Roger gets his way, and proceeds to give Victoria the third-degree on Burke Devlin. She finally has enough, and excuses herself, threatening to take the morning train back to New York.

Back in her bedroom, she hears the haunting sobs of a woman echo through the halls. She goes out to investigate, and finds no one in the parlor as the sobbing stops.

We then meet David, who creeps down the stairs and states his hatred for Victoria. 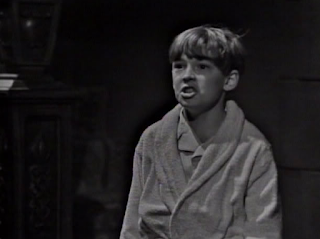 I have great news for those of you who are following along on this journey. After several days worth of comments whose quality exceeded my own ramblings about the first few episodes, I was able to convince my sister Christine to participate in the blog in a more formal fashion. She's in large part to blame for it existing, having sent subtle hints over the last few months that the 50th anniversary was approaching. You see, she knew I already had the entire series on DVD. Years ago, she made me feel better about having bought them all by borrowing and actually watching them. And when the deluxe coffin box set was released, she acquired a set of her own. I can't think of a better way to experience Dark Shadows than with someone coming in relatively cold (me) alongside someone already well versed in the history of the Collins clan. I hope you'll agree!

Louis Edmonds' Roger clearly has some interesting secrets—secrets that Burke Devlin is privy to (or responsible for)—and they somehow involve his sister, too.

I loved it when Carolyn joked (referring to her uncle Roger), "At the stroke of 12, he turns into Dracula." I wonder if anyone at the time would have given a second thought to a vampire showing up on the scene.

For the first time, the entire episode takes place in the Collins home.

And while it wasn't quite as I had predicted, Victoria did technically meet David in this episode.


"The fear of darkness is only for children." -Victoria Winters

A loud boom. Unknown feet ascend the staircase and make their way to Vicki's room. A hand reaches out to grasp the doorknob and...the camera pans up to Roger's face as we hear Liz castigate him. Something about hearing Elizabeth's muffled voice behind the door as Vicki listens to them argue reminds me of Madame Blanc from Suspiria and makes the scene more chilling than it otherwise would be.

Although some of us began viewing Dark Shadows at Episode 210 with the first volume issued on DVD, Collinsport was actually a thriving fishing village with well developed characters and mysterious goings on long before that, so don't be fooled into thinking that you have to wait until April 17th before anything interesting happens at Collinwood.

When Liz gets Roger downstairs, she lays into him: "Roger, that girl was brought here to care for your son. Your son, Roger, not you." He replies, "What's coming now, a lesson on morals?" Despite this exchange, Liz leaves poor Vicki in her jammies and robe alone with Roger in the drawing room even after he says, "Miss Winters, you wouldn't mind keeping a lonely man company for a little while, would you?" He then proceeds to hit up his favorite brandy bottle before informing her that "Pain sometimes proceeds pleasure, Miss Winters, or are you too young to have discovered that?"

So the theme of today's episode is that Roger Collins is a creep. We are assured of that fact because it is stated several times that he is really a nice fellow. Roger's pet name for Carolyn is Kitten. We should not read too much into that, right? Carolyn lets slip to Vicki that Roger's wife is still among the living and the less said about her the better. More intrigue.

David's entrance makes us hope he will live up to our expectations of being delightfully demonic. He's really hitting it off with Vicki.

Roger Collins shows up at a small house, banging on a door, apparently looking for Burke Devlin after last episode's stormy exit.

Meanwhile, back in Collinwood, Victoria Winters meets another member of the Collins family, this time out young Carolyn Stoddard, who starts to give her a tour of the house.

At the Blue Whale, Joe returns to meet with Burke Devlin, who offers him money for information on the Collins clan.

Roger stops by the diner where Maggie Evans works and they speak of Burke Devlin. There's also discussion of Maggie's father, a painter. Bill Malloy shows up at the diner and through that we learn that Devlin is an ex-con.

Back at the Blue Whale, Malloy breaks up Joe Haskell's discussion with Devlin, and tries to convince him to leave the Collins family alone. But there's clearly bad blood there.

Victoria experiences two strange occurrences, a door mysteriously opening and a letter moving from a drawer to her bed. The first sign of ghosts in Collinwood, perhaps? 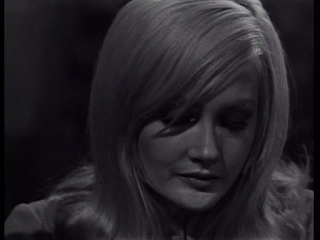 It's interesting how Victoria has met the members of the Collins family one per episode in this first week of the show. Will we meet young David tomorrow?

Also worth noting this week are the number of pre-filmed location shots. I always assumed the train shots from the premiere episode were stock footage, but they obviously went out to shoot scenes of Victoria walking outside the house, or Roger driving out to see Devlin in this episode.

While as a new viewer, you might believe we get our first whiff of the supernatural this episode. While I'm prejudiced by having seen future episodes, I think the way he's been talked about thus far, young David Collins is likely the culprit.

In this episode, we find out that Burke Devlin has hired someone to do some digging into the Collins' family history.

While hanging out in the Blue Whale, he comes across Carolyn Stoddard, daughter of Elizabeth Collins Stoddard, who by all accounts hasn't left Collinwood in 18 years. She's dancing with everyone in the place except her boyfriend Joe Haskell. After Joe gets in a fight with several of the locals, Devlin steps in, threatens to take Carolyn over his knee, and asks Joe to come back and see him after he deposits her at home.

Meanwhile, back at the house, Victoria gets a brief tour, and meets Roger while overlooking the ocean at Widows' Hill. He's as friendly as can be, and quite open about the strangeness of the family until Victoria happens to mention having met Burke Devlin, which sends Roger off in a rage.

We still don't know why Victoria was hired. Elizabeth makes up a story about Roger having received a recommendation, and he basically says if Elizabeth says so, it must be true. As I mentioned yesterday, I have watched a stretch of episodes that give me insight into more of what is going on with a number of these characters, but I can't help but think even if I didn't already know some of their secrets, the show is somewhat compelling in making me want to find out more about them. 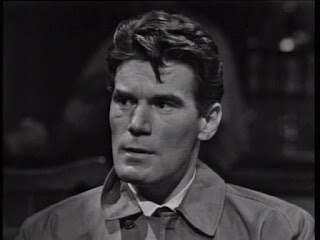 I am particularly fond of Burke Devlin, portrayed by Mitchell Ryan. I'll always think of him as the particularly nasty bad guy General Peter McAllister from Lethal Weapon, but I also loved his performances as Charlie McCoy in Magnum Force, and Minnie Driver's dad in Gross Pointe Blank.


Robert Cobert not only consistently pumps out great spooky music, he does some wild rock and roll numbers for the scenes in the Blue Whale.

I've got a long, long way to go, but for now, I'm excited to continue!

In the first episode, Victoria Winters arrives in Collinwood. We don't yet know why Elizabeth Collins Stoddard has hired her to be a companion and take care of her nephew David.

Along the way we also meet Burke Devlin, who's apparently got history with the Collins clan, and not a good one. We also meet Maggie Evans (looking so very different than I remember her!), who tries to warn Victoria away from the strange house on Widows' Hill.

But Victoria won't be so easily dissuaded. Even if her new employer acts strange... 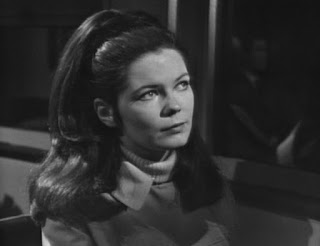 I had previously embarked upon a journey through Dark Shadows, starting (as was the only choice at the time) with the summary recap and introduction of Barnabas Collins. I was able to get several dozen episodes in, and really enjoyed it. Unfortunately, I had to bounce from one Blockbuster Video to the next to try and find the next volume in the series, and it soon became apparent that none of the stores were going to stock the entire series.

So when they started to release DVDs, I decided to go whole hog. And when they finished the run, and announced they were going to release the full pre-Barnabas run, I knew I had to pick them up, too. Of course it's been years, and I'm only now using the excuse of the 50th anniversary of the series to start working my way through them. We'll see if I can keep it up. Though I plan to post daily (on each episodes anniversary), I'm actually watching them in larger batches (like potato chips, it's hard to have just one).

For anyone worried if the show was worth watching before Jonathan Frid joined the cast, I can say the answer is absolutely yes. The cast is great, and for my money, Robert Cobert's music give every episode the right mood. I can't imagine what folks were expecting from this show at the time it originally aired, but I can imagine being excited to find out about the strange goings on in the town of Collinwood... and the strange members of the Collins family.

I hope if you've watched the show, or if you're following along at home, you'll leave your comments about what you think of each episode.