Kitty finds the portrait in Quentin's room. She lifts up the cover to find the frame is empty. She searches the closet when a hand grabs her shoulder. Edward asks her what she's doing in Quentin's room. She asks why he calls her Kitty, pretending to be someone else. She feigns passing out in his arms, and then 'wakes' to ask him what happened, and where she is. He tells her she was searching Quentin's room for something. He says that they'll pretend it never happened. Edward tells her that Count Petofi called for her, and will call back later. She says that she's sure he will.  They leave the room and Petofi-Q comes out of the shadows. 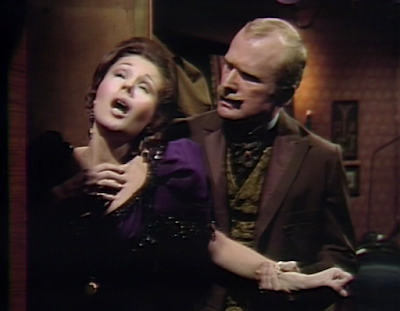 Petofi-Q goes into Quentin's room and looks around.

Kitty says that if Petofi arrives, she doesn't want to see him. He goes to get her some tea, and she's thrilled that Edward believed her deception. She wonders what to tell Petofi about the portrait. She then hears the music box and walks over to Barnabas' portrait. She tries not to look at it. 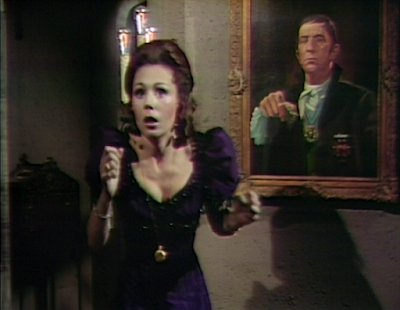 Angelique comes in and seeing her struggling, asks if she needs a doctor. Kitty says after all she's gone through with the woman in the rectory, and Angelique presses her on it. Kitty says she disappeared before Count Petofi's eyes, and Angelique runs out. 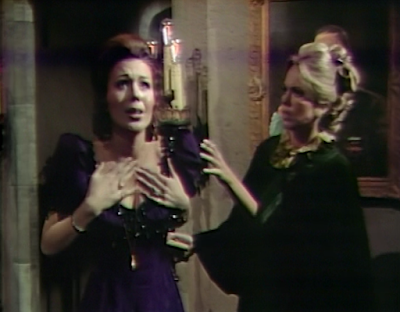 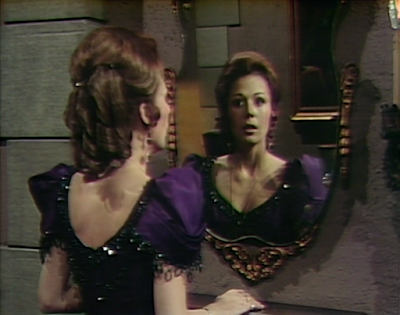 Petofi-Q asks Edward why he and Kitty were in his room. Edward says Kitty had a seizure. Petofi-Q says he doesn't trust her. He asks Edward if he knows that before he died, her husband Gerald was released from prison. He served time for a robbery. Edward calls him a liar, and Petofi-Q suggests that he check himself. Edward threatens to kick him out of the house if he tries to share such stories. 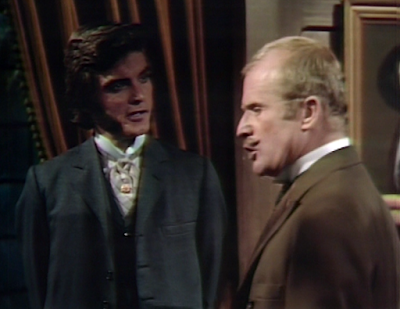 Kitty comes downstairs and is about to leave when Edward sees her. She says she wants to go for a drive, and he offers to go with her. Petofi-Q interrupts and suggests that perhaps she wants to be alone. Petofi-Q says she had something to do, and despite what Edward says, she is a woman of secrets. 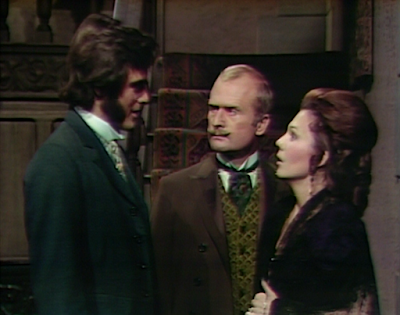 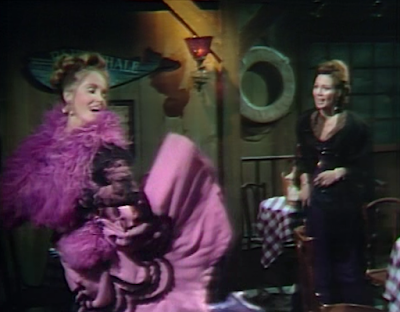 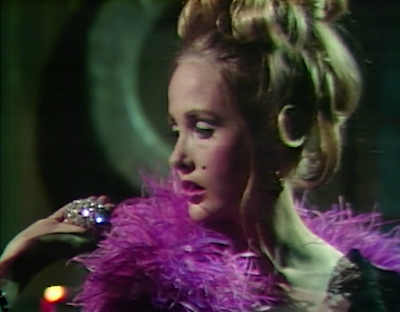 She says she doesn't know why things are happening to Kitty, or why she saw the music box. Kitty asks if she works for Count Petofi, and Charity laughs. Kitty asks who's responsible if not Petofi. Charity says spirits can torment them. Kitty asks why that would happen to her. Charity says there's a way to tell if it's supernatural. She tells Kitty that she'll come to Collinwood at midnight. Kitty gets up to leave, and Charity tells her she forgot something. Kitty picks up the diamonds she had offered Charity for her help. 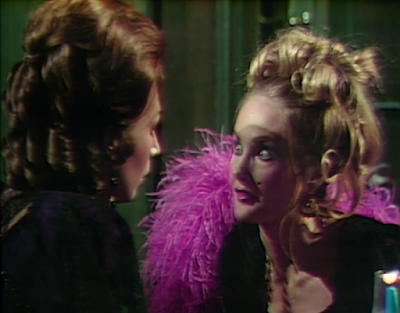 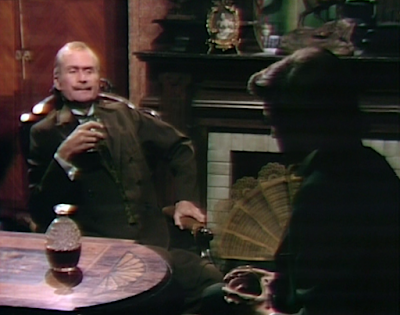 Petofi-Q asks where she has been. She says she went for a long walk to think, and she tells him they're not getting married tomorrow. She says that she forced it on him, and now she's afraid. He says he wants to marry her. She says it's better for them to postpone the wedding for a while. 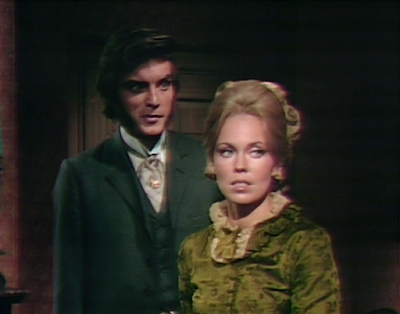 At midnight, Charity tells Kitty that they're going to have a seance. Edward comes downstairs and Charity asks him if he minds if she invites some spirits. He says he does mind, and Kitty begs him to let her proceed. Edward agrees to participate. They go to the drawing room, and Charity tells everyone what to do. She asks if there are spirits in the room. She calls for the spirit to appear. She asks for a sign. 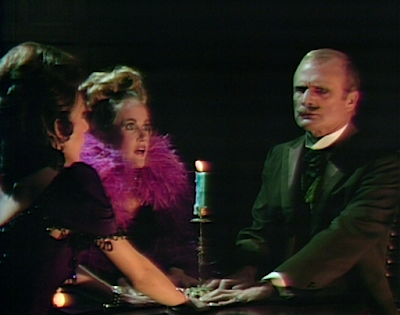 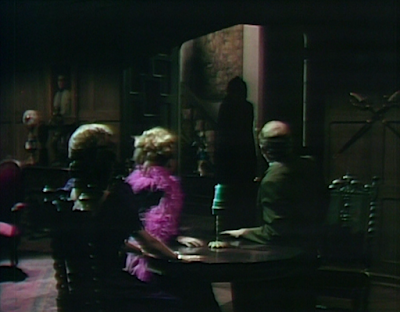 John: Can someone please teach Charity to play another song? And if you were interested in maintaining your sanity, would your first stop be talking to the local schizophrenic?

Christine: It is truly horrifying to hear that song over and over and over and over again, and I think it has surpassed the number of times Sarah sang London Bridge. I hope someone puts an end to Petofi soon so Charity can be released from her Pansy possession.

John: So wedding day has come and gone. Who would have thought Angelique would be the one to put on the brakes. Could that mean that she has figured out what's going on with Quentin and Petofi?

Christine: I think she knows, and I think he knows she knows. And if she doesn't know, then it was his insistence on her being an obedient wife that has her rethinking her engagement.

John: Time to break out the seance tracker! It sure seemed like the seance might be our doorway to 1969... but once more we are graced with the appearance of a hooded figure. Who could it be? Julia, back from the future?

Christine: It certainly pays homage to Dark Shadows' first séance when Laura Collins appeared as the hooded figure. Maybe it's the spirit of Pansy Faye, who's come to get her song back. We can only hope.

Down for the Count:
Barnabas was staked in his coffin 14 episodes ago. 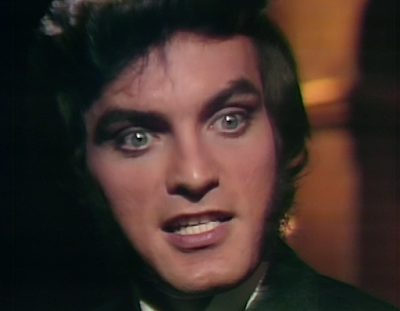 Episode 860: Charity, possessed by Pansy Faye, conducts; Edward Collins and Kitty Soames participate; a hooded figure appears; held in the drawing room at Collinwood in 1897
Posted by John Scoleri at 6:00 AM