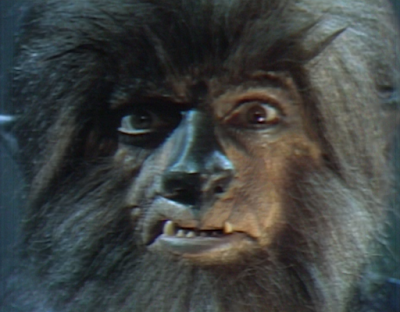 The werewolf is in the mausoleum when Barnabas visits Ned. Ned asks if he thinks his cousin will end up like her. Sabrina seems aware that there's a full moon out. Ned says he's willing to shock his sister out of her condition, if that's what it takes to save her. Barnabas says goodbye to her, and she reacts to his cane. Ned says that the wolf's head is helping her remember. He takes it from Barnabas and brandishes it in front of his sister, asking why it upsets her. She struggles and Barnabas demands that he return the cane. 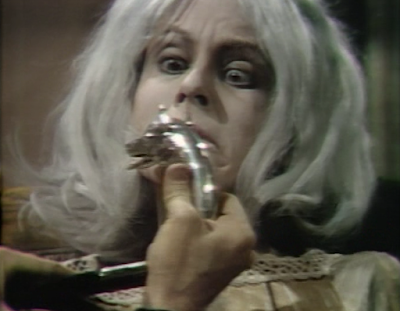 Sabrina has a flashback to her surprise visit to Chris. She tells him he's not supposed to be there, and that she's planning a surprise party for him. Chris doesn't say anything. She asks why he lied about going away for the weekend, and he says he's feeling sick. 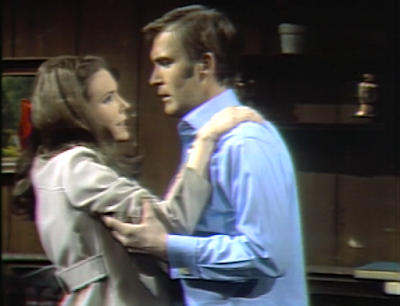 He starts to groan in agnoy and tells her she needs to go. He says she has to get out, and pushes her away. She asks why he won't let her help him. He says nothing, so she leaves. He grabs some chains. Outside, Sabrina has second thoughts, and returns to the room. Inside, she see's a werewolf. She screams. 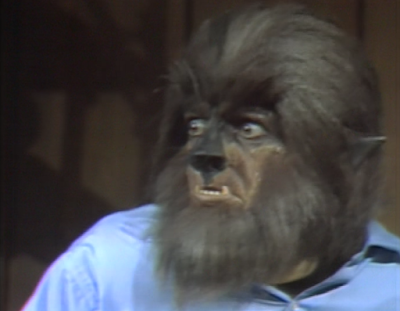 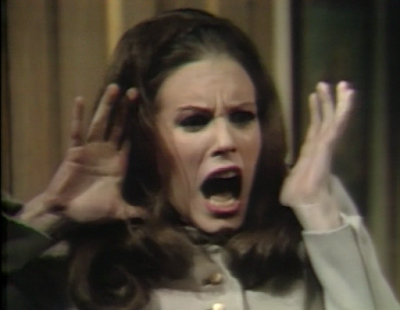 Sabrina screams and passes out. Ned tells her that Barnabas has gone to get a doctor. He asks her to tell him what happened. 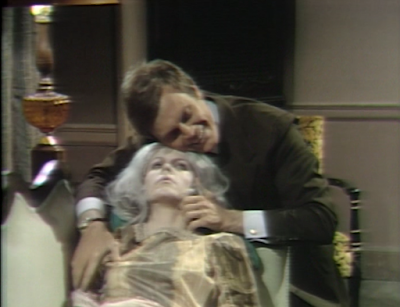 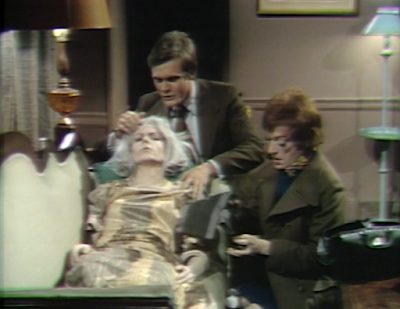 Julia suggests that Ned admit her to Windcliff for treatment, and he refuses. Julia goes to give her a sedative, and Ned tells her not to. He doesn't want her to sleep. Barnabas suggests that Julia stay with her, but Ned refuses, and Julia willingly leaves. Ned asks Julia if she owes her something, and Julia tells him she'll send him a bill. 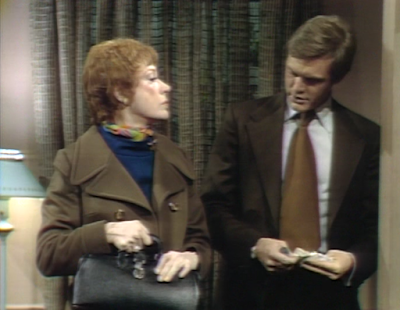 She and Barnabas leave, and Ned asks his sister to tell him what she remembers. 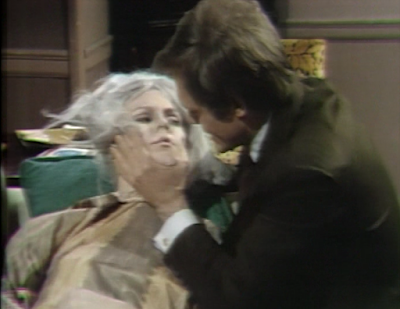 Julia tells Barnabas that Sabrina knows, and she will eventually tell. Barnabas takes turns feeling bad for Ned, Sabrina and Chris. Julia reminds him that they have been shielding a werewolf. Barnabas says that he will help Chris with his curse, with or without her help. 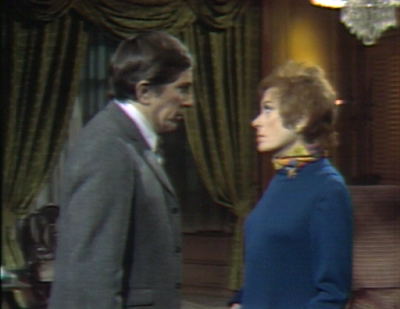 Ned continues to press Sabrina for information. He leaves the room to get her a sedative. She gets up and walks to the mirror, screaming when she sees her reflection. Ned comes back in and forces her to look at herself. He suggests that she's protecting Chris. He tells her that Chris is going to be punished. She sits back down in her wheelchair. Ned tells her that he's not going to give up. 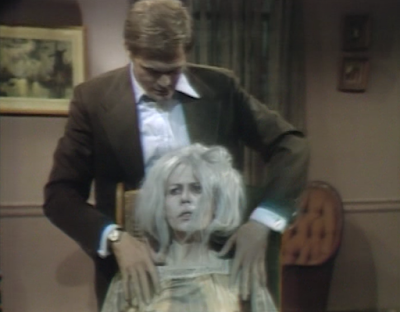 Julia tells Barnabas that it's time to go to the mausoleum. Barnabas points out that he thinks there's a connection between Chris and what's going on at the old house. Julia says she saw Stokes and Roger. They had a seance to try and communicate with Quentin, but only heard his laughter. They leave to get Chris. 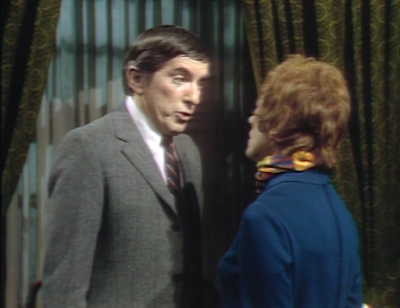 Barnabas and Julia arrive at the mausoleum. Julia listens at the secret door, and Barnabas says that she won't hear anything, as Chris will be unconscious. He opens the door and they see that he's still a werewolf. 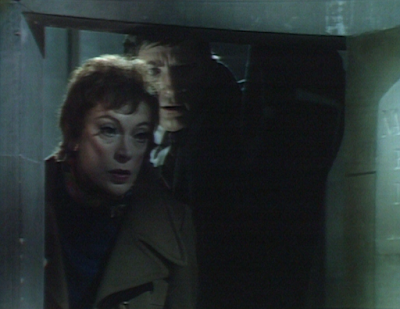 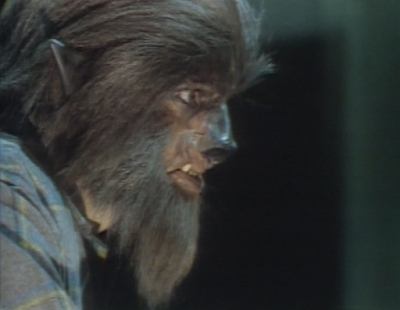 John: So Sabrina never technically saw Chris change into a werewolf. And as we know all too well, seeing people in the same outfit as a werewolf isn't normally sufficient for them to put 2+2 together. And yet she seemingly has. She's fixated on Barnabas' wolf's head cane, and she keeps staring at the full moon. Too bad this apparent lyncanthropy expert chooses not to talk to anyone!

Christine: Since she immediately turned around and saw a wolf in Chris' clothing, I think it was a simple addition problem for her. I'm beginning to think the one responsible for her trauma is her brother Ned, however. One minute he's groping and caressing her, and the next he's grabbing and shaking her. I think the real reason he doesn't want Julia to take her to Windcliff is because Sabrina might divulge his abuse. 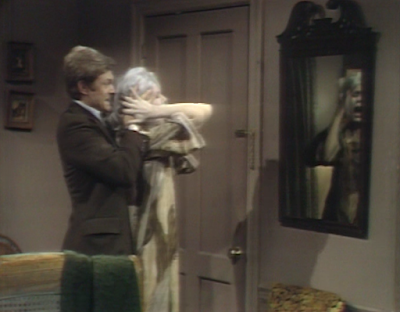 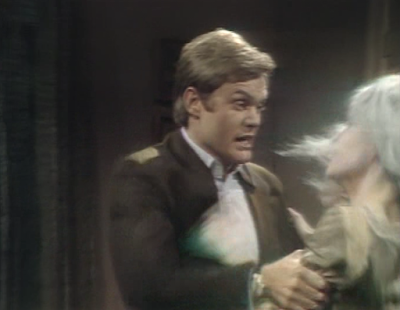 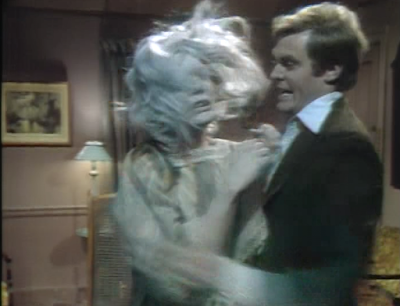 John: An off-screen seance was held in Collinwood? With Roger, of all people? Shame on the writers for depriving us!

Christine: How dare they cheat us out of a séance! Still, it counts for the Séance Tracker.

John: Uh oh! Do we have a twenty-four hour werewolf to deal with now? At least he was pretty chill, even when they walked in on him.

Christine: He is a nocturnal animal, so perhaps he was getting ready to go to sleep as the sun was coming up. I wonder if they'll have to start tossing raw steaks into the mausoleum to keep him fed.

Glad to see a list of the seances! In any case I can see the point Christine is saying with Ned. I consider him definitely horror movie material, more so than the werewolf!

Thanks for the séance tracker! We're watching DS reruns on "Decades" and have commented that this is the only family where when the going gets tough, they hold a séance!

Glad you folks are enjoying the Séance Tracker!

Sabrina won't be seen again for months to come. It's surprising they didn't find a role for Lisa Richards to play in the past. Then again she was only on the show a couple days at this point and maybe they weren't that invested in her. Plus the time trip went on much longer than originally planned. I doubt they intended for the poor actress to be on hold that long.