Forsythe is in the basement of the cottage where he has exhumed a body. A wind blows through the room, and Forsythe say he knows Brutus is there. He demands that he show himself so he can fight him again. He calls for Brutus to show himself, and finds himself face to face with him again. The ghost of Brutus asks if James thinks he can change the things Brutus did. He says he will succeed, and Sarah will get a proper burial. Brutus says she betrayed him and deserved what she got. Forsythe says Brutus is the treacherous one. He says Brutus killed Sarah, just as he killed him and Brutus' wife Amanda. He says he intends to right the wrongs he has done. Brutus warns him to go back to his tomb. 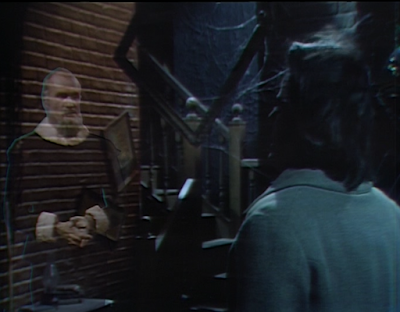 Julia tells Melanie that Morgan has disappeared just like Gabriel did. She says she's concerned about Carrie, who had so many questions about how Morgan was behaving. Julia tells Melanie to be careful when she talks to Carrie, to ensure she doesn't let something slip about the curse. Carrie arrives at the house, crying, saying Morgan returned to the cottage and locked her in her room. She explains she got out through the window. Julia says she'll take her back to the cottage. They open the door and Kendrick is there to see Melanie. Julia tells him she'd like to have a word with him when she returns. He tells her that he'll wait for her. They leave, and Kendrick tells Melanie he wants to tell her something outside, so they aren't overheard. Melanie leaves a note for Quentin on the table. 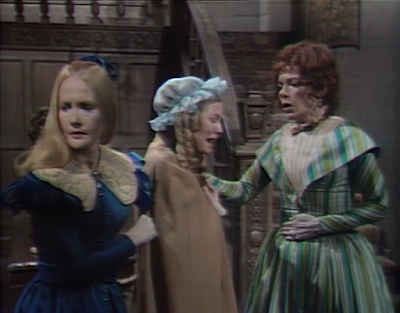 At the cottage, Julia says she doesn't see anyone. Carrie tells her that he heard him go downstairs. They go into the cellar and find Morgan unconscious on the floor. Carrie asks if he's dead. Julia says he's still breathing. They look around the room, and Carrie says that she can feel angry spirit. Julia invites her to stay with them at Collinwood. A wind passes through as Julia goes to check on Morgan, and Carrie says it's the spirit. They then see the skeleton, and Carrie says they have to get out. Julia tells Carrie to go to Collinwood and send Quentin back. She stays with Morgan. 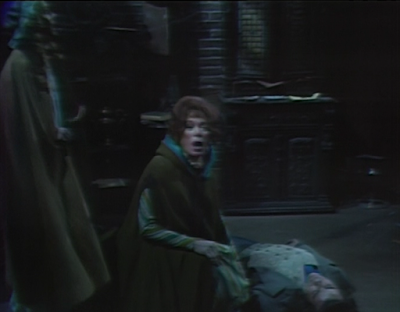 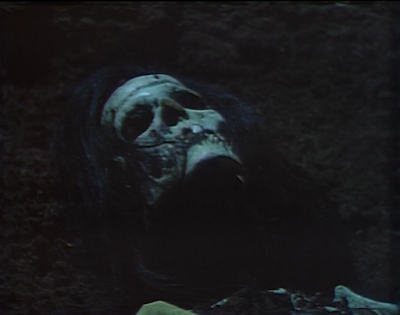 In the garden, Melanie tells Kendrick she was surprised to see him. He asks her how the Collins family came to adopt her. She says that she found out that her mother was still alive when she was adopted. She says she found a letter, but Julia took it from her. Kendrick asks how Justin Collins found her. She tells him she was six months old, and her father was on the board of directors at the orphanage. He says that it's true he was on the board of directors, but that she was never at the orphanage. He says he searched the records. She asks why he would do that. He says he felt she had doubts about her real parents, and he wanted her to be happy. She's grateful for his concern. Kendrick asks who first told her she was at the orphanage. She thinks it was her father. He wonders if anyone else in the family knew it was a lie. She asks why her father would like about it. She then says that she thinks Julia knows. 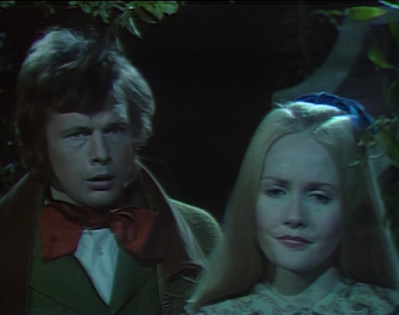 Julia is watching over Forsythe in the Collinwood drawing room when he comes to. He asks if she ever smiles. She says there's nothing in the house to smile about. She says she hoped when he came to that he'd be himself again. He reiterates that he is himself. She asks what he was doing in the cellar of the cottage. He tells her that he's not there to help her. She asks why he hates them so. He says she's a Collins. She suggests that he shouldn't hate them for something that happened 160 years ago. She asks who he dug up in the cellar of the cottage. He says that his concern. She asks why he was unconscious. He refuses to answer. She says he must not go back there. He says he will under one condition: if someone goes to gather up his sister Sarah's skeleton and sees to it that she gets a proper burial. Julia asks how she came to be buried there. He refuses to answer. He tells her that she can ask the spirit of Brutus for the answer, and bids her goodnight. 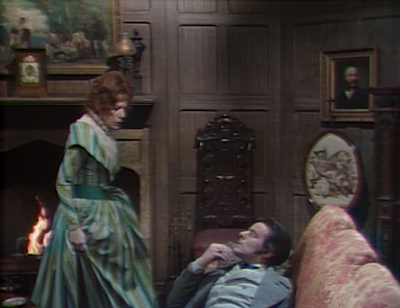 Kendrick and Melanie return to Collinwood. They kiss goodnight. Melanie goes upstairs, and Kendrick starts to leave. He then turns and sees Julia watching him. She reminds him they were going to talk, and he goes into the drawing room. She tells him that he's been interfering again, putting ridiculous thoughts into Melanie's mind. He suggests that Julia wouldn't like Melanie finding out the truth about her past. He asks why everyone is lying to her about her background and the identity of her real parents. Julia says that no one is lying to her. He calls her a liar, explaining that he's been to the orphanage, and there's no record of Melanie there. He asks her what is it that they don't want Melanie to know. She tells him to leave and never return. She threatens him, and starts to escort him to the door. She sees Melanie coming downstairs, seemingly possessed. She closes the door and says they can talk a little longer. He opens the door and finds Melanie in the foyer. He asks her what's wrong. She barks at him, saying that he's not a Collins, and he doesn't belong there. She says everyone in the house is destined to die. He turns to Julia and demands that she tell him what's wrong with Melanie. 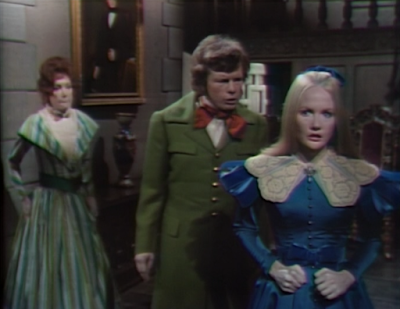 John: I never thought I'd be so disappointed by a ghost's appearance, but Brutus' back and forth with Morgan-possessed-by-Forsythe just came across as belabored exposition setting up more plot-points that aren't going to amount to anything. Perhaps I'm wrong, and this will all get developed in the final few weeks of the show, but past history suggests the writers are far too willing to drag out such storylines, and with the clock ticking, whether they knew it or not, it's hard to believe that all of this 1841 parallel time nonsense will ultimately amount to anything... 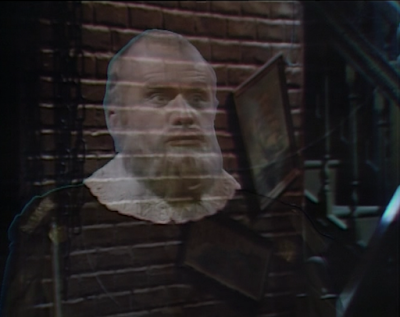 Christine:  I had to believe that all that wind blowing through the cellar was caused by Brutus' bluster. Apparently, Brutus was a homicidal maniac. What does that have to do with the curse?
John: So Carrie escapes from the cottage where Morgan/Forsythe has locked her up, and Julia's first thought is to drag her back to the cottage?
Christine: That's what I thought. At least she suggested that she stay the night at Collinwood after finding the skeletal remains.
John: Boy, Julia was on a roll today! Did she really think it was going to work when her tone abruptly changed from a veiled death threat to an invitation for Kendrick to stick around for some more idle chit-chat?
Christine: That was hilarious! Do you think Melanie is possessed by Amanda, Sarah, or someone else? Any guesses on who her real parents are?
Posted by John Scoleri at 6:00 AM

I think it was pretty well established in a previous episode that Josette was a bit too concerned about Melanie's well being. I'd guess that she's the mother. Could Justin actually be her real father???

That's what I thought in Episode 1214. It would make sense that Justin is her biological father, since he organized the adoption. It leads to the question of why she was given up, and whether or not Barnabas was still alive when she was born, as well as how he died. Glad to have you here with us to the end, Paul.