From the very first episode, we are introduced to the Collins family ancestors, and frequently see characters interacting with or talking about ancestors in the portraits. In Episode 4, Liz points to the portraits in the drawing room from left to right saying, "Look at them, Roger, lined up on the wall: Isaac Collins, Jeremiah Collins, Theodore, Benjamin." In Episode 334, Roger describes how he used to be afraid to walk the halls of Collinwood alone as a boy, imagining that the dead people in the portraits were staring at him with piercing eyes, hating him. Not all of the ancestors have been identified, and some identifications have changed on several occasions, so information presented here may also change as more facts are revealed. 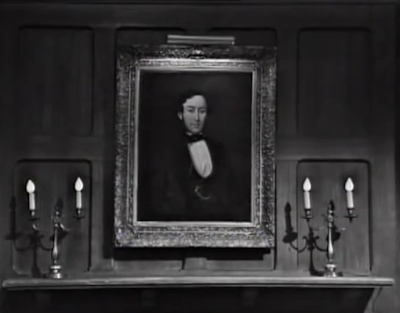 Jeremiah's portrait is the first one seen on the show and encountered most often due to its prominent placement over the mantel in the drawing room. Elizabeth tells newly arrived Vicki that he's her great grandfather and was responsible for building Collinwood. She would later tell Vicki that Daniel was her great great grandfather in Episode 463, as the Collins family history would undergo revision after the first excursion into the past, which is when we learned that Daniel was Millicent's brother, and much younger than Jeremiah. We also learned that Jeremiah was brother to Joshua and Abigail, and that he eloped with Josette while under a spell, causing Barnabas to kill him in a duel.

Benjamin's portrait is the second one seen when Liz opens the doors to welcome Vicki in Episode 1. Roger identifies him as his great uncle in Episode 59, whom Sheriff Patterson acknowledges is Benjamin Collins. In Episode 279, Vicki tells Burke this is a portrait of Joshua Collins. At that time, it was hanging in the drawing room to the left of the bay windows, which is the only time it has been in a different location than it's usual place in the foyer. In 1795 time, we first see Benjamin's portrait hanging at Collinwood mansion in Episode 395.

Naomi and Joshua's portraits are found hanging to the left and right of the drawing room doors and are first seen after Vicki arrives at Collinwood in Episode 1. These portraits have not been identified as Naomi and Joshua, but it makes sense to me that these two would be featured in the drawing room and they somewhat resemble the ancestors we met in 1795. Until I find out differently, I'm identifying them as Barnabas' parents. Just as Joshua watched Naomi's drinking closely, his portrait is situated near the brandy bottle to continue this habit. In 1795, Joshua's portrait can also be seen hanging in the entryway for the first time in Episode 455. 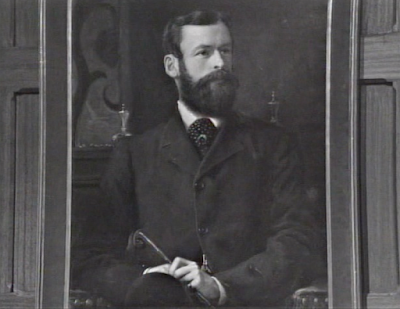 Isaac Collins' portrait was first seen in Episode 3 when Vicki asked Carolyn who he was. While most other portraits remain hanging in the same location, the portrait of Isaac Collins is unique in that it is often displayed in many different places around Collinwood. It was first seen hanging to the left of the bay windows in the drawing room. Carolyn introduces him to Vicki in the third episode, saying:


Good old Uncle Isaac. Isaac Collins. He's the one who began it all. Started the whole wingding back in the 17th century. Built the fishing fleet. Founded the town. Gave it a name. The works. He must have really been something. I've always thought Uncle Roger looked a little bit like him.

After being interrupted, she goes on to say:


Isaac Collins, the big shot who started the whole mess. You might say he's the man who put us into the fish business. I wonder what he'd say if he could see the town now? Artist colony, summer people, and this big, fat, ugly house on the top of the hill.

In Episode 4, Isaac's portrait was moved to the right of the windows in the drawing room, where it stayed until Episode 16.

In Episode 16, his portrait was moved back to its original location to the left of the bay windows in the drawing room.

In Episode 17, Liz teaches David about the founder of Collinwood.


Liz: Isaac was a brave man, David. Crossing the ocean in a small sailing ship. Do you know when that was?

Liz: That's right. He landed right near here in Frenchman's Bay, and then he came to Collinsport and he liked it, and he decided to stay. Only it wasn't called Collinsport then, because there was nothing here. Just a harbor and trees and lots of fish. Isaac Collins. Imagine having a town named after you. 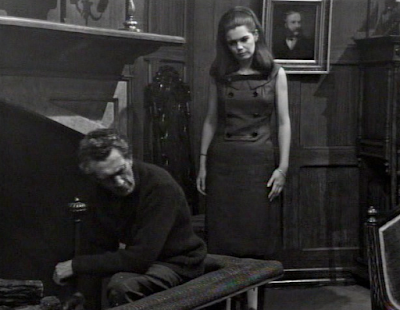 The portrait of Theodore Collins is often seen in shots with Jeremiah's portrait as his is situated to the right, but is first seen prominently looking over Vicki's shoulder as she tries to ingratiate herself with Matthew Morgan in Episode 6.

The portrait of Abigail Collins made its first appearance in Episode 65, taking up residence in Isaac Collins' former place to the right of the bay windows in the drawing room, where it continues to reside. While I initially labeled it The Unknown Ancestor, after seeing it a little more clearly and determining the subject is female, it makes sense to me that Abigail would be represented along with her brothers and sister-in-law in the drawing room. The portrait remains unidentified by characters on the show, so this information could change as we make our way through the series. 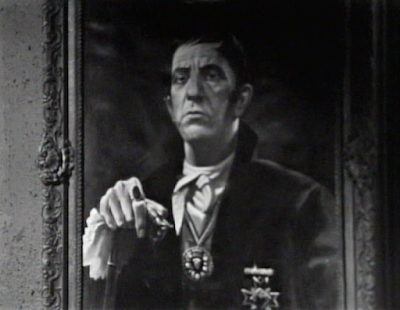 Barnabas' portrait can first be seen hanging unnoticed by any characters in Episode 204.


Willie takes note of it in Episode 205, admiring Barnabas' jewels as David teaches him Collins family history, after which the eyes in the portrait begin to glow and a heartbeat is heard.

Barnabas often communicates with those he's bitten through this portrait, and has called to Willie, Vicki, and Carolyn in such a manner.

In 1795, Barnabas' portrait was hung for the first time at Collinwood in Episode 422, though Joshua informed the Countess duPrés that it was several months old.

David introduces Amy to the portrait of Thaddeus Collins in Episode 639, which they discover as he takes her on a tour of the West Wing in search of ghosts. He tells her that Thaddeus was alive during the Civil War. Hopefully Thaddeus may be rescued and reinstalled in a more prominent location so we can get a better look at him some day soon.

In Episode 1061, Barnabas and Julia return from parallel time to find Collinwood in ruins. Some portraits have been displaced, while others have been saved at a nearby cottage where Carolyn is staying. Stay tuned for additions and clarifications as we discover the events in 1995 and the role of portraits in preserving Collins family history during this time. 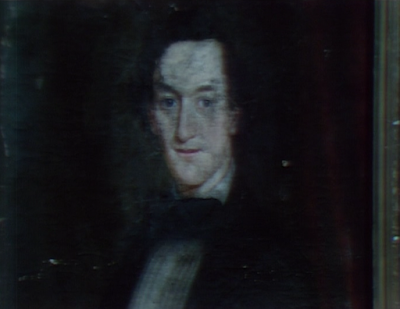 In 1970, David finds a note from 1840 that reads, "Where Abner Collins found, warning all not to enter, I will meet you tonight. Come to the playroom if you value your life." David tells Hallie that Abner Collins is "some dead relative," and takes her to the portrait of Abner Collins that hangs outside the linen closet, where they encounter the ghost of Daphne Harridge.

Stay tuned for more portraits to be added as they appear on the show.

I am amused that Isaac Collins from 1690 is kitted out with a fine 19th century collared shirt and tie. A jabot and high collar might be more period. But I am enjoying these pages immensely and expressly Sam Evans' work. Does anybody know where the paintings that were originals ended up?

Nice observation on Isaac, GoldUsher! He does appear rather modern. I have not been able to find any information on where the original portraits ended up yet. It remains a mystery. Glad you're enjoying the Gallery pages!

I found it strange that Sam Evans gave Vicki a portrait that looked just like her, when she was searching for her mother, in the beginning. Then later, before Vicki left for good, and Sam died, her portrait was back in the Evans cottage among his paintings.

I agree, Anonymous. I made a comment about that in Episode 541, and noted it on The Works of Sam Evans page.

Great job on this page and website overall! Could you please reload the missing seven photos on this page? Thanks!

Okay, they are there! Took a while to load. Sorry for the misconception on my part.

Thanks for the compliment, Anonymous! I appreciate the notification about missing photos. We've had problems losing some images in the past, so I was glad to see it was just a page loading issue. That's probably because I crammed 77 photos on the page. ; )

My favorite is Josette's portrait and that is the prop I would like to know its whereabouts the most. Where did it go? In the early episodes she walks out of it, very eerie!

I have a feeling the portraits from the show must have ended up in the trash, as certainly they would have been put up for sale or been otherwise shared by now. There is also the possibility that some folks have them in their possession without knowing their history or significance. Or perhaps their whereabouts are being kept secret to avoid theft. Your guess is as good as mine. It would be nice to know what became of them.