Catherine arrives at the old house and finds Bramwell coming down the stairs. She says that Julia told her Daphne had taken a turn for the worse. He tells her that Daphne is dead. He says she died peacefully. Catherine asks why it couldn't be her, saying that she deserved it. She says that the two of them inflicted the will to die upon her. Bramwell tells her that Daphne had a final wish — that she wanted them to be together. Catherine tells him that he's making it worse. She goes up to see Daphne, alone. 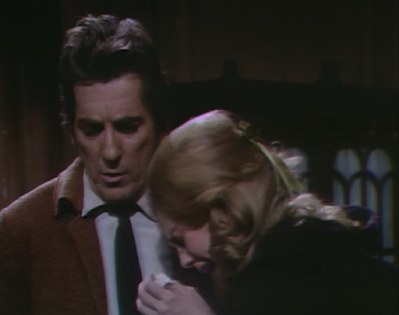 Julia is in the drawing room, agitated. Kendrick and Melanie return and tell her that they were just married. She doesn't say anything. She explains that Daphne took a sudden change for the worse, and she's waiting to get an update. She tells them that they should wait for an update. She then takes the time to congratulate them. She asks if they've made any plans to stay in Collinwood, and he says they plan to stay in Collinwood, at least temporarily. Catherine returns, and Julia asks about Daphne. Catherine tells them that she's dead. Melanie bursts into tears and runs upstairs. 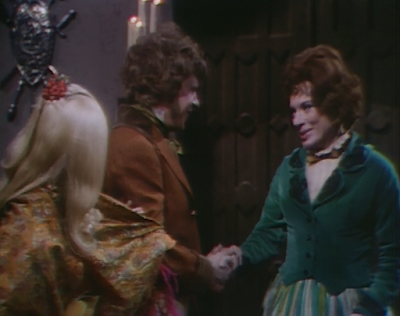 Julia tries to console Catherine. She says that she didn't know Daphne well, but she did pray for her. Ju;ia says she's worried about how Morgan will react. She says he's been particularly bitter towards Bramwell since Daphne fell ill, and with her gone, he will likely see him as competition for Catherine's affection. Catherine says she wouldn't do that. Julia says she's not worried about what Catherine would do, but what Morgan would do. Catherine says she'll tell him to leave Bramwell alone, and runs upstairs to find him. 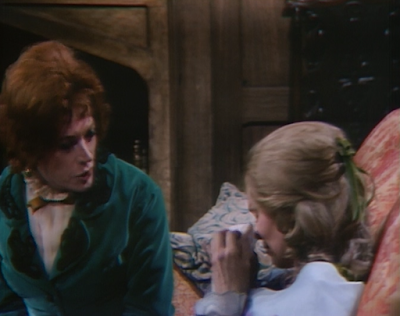 Kendrick carries Melanie into their room. He puts her on the bed and kisses her. He acknowledges that she's still upset about Daphne. She laments that death and madness are all that they know in the house.

Bramwell sits staring into the fire. There's a knock at the door, which he ignores. Eventually, Julia lets herself in. He says he assumes she has come as the family spokesperson to offer their condolences. She says she has. He tells her that she's done her job, the ritual is over, and he bids her goodnight. He says he just wants to be left alone. She says she had another reason for coming. She says that after the funeral, it might be wise for him to leave Collinwood. He asks her to explain herself. She says she wants to avoid another incident like the duel. She says that if he stays, Morgan may try something foolish. Bramwell says that if Morgan tries anything, he doesn't stand a chance. He refuses to go. He tells her that no force on earth could drive him away. He says he has longed to return a rich man to see the rest of them rot in hell. He says he has one good reason for staying — Catherine. Julia points out that she's married, and he reminds her that as Daphne knew, there's only one man that can make Catherine happy. 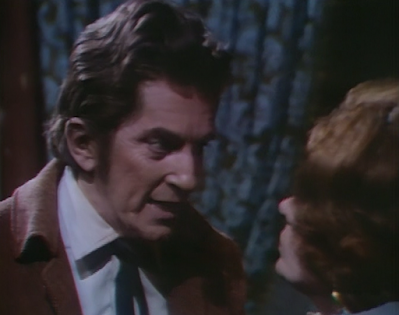 Catherine tells Julia that when she told Morgan about Daphne, he was ready to go to the old house and confront Bramwell. She says she got him to give her his word that he would leave Bramwell alone. Julia says that she hopes Morgan keeps his word, and that Bramwell also stays away. Kendrick comes into the drawing room, and tells Julia he has second thoughts about staying in Collinwood. He says he will take Melanie away as soon as he possibly can.

As Melanie sleeps, the shutters swing open. She asks who's in the room, and hears laughter. She sees and recognizes the ghost of Brutus Collins. She asks why he came to her. He says his curse must be fulfilled. He tells her that she will help him. She begs him to leave her alone. He says that she will be the instrument of his revenge, and calls her Amanda. He says she must do as he tells her. 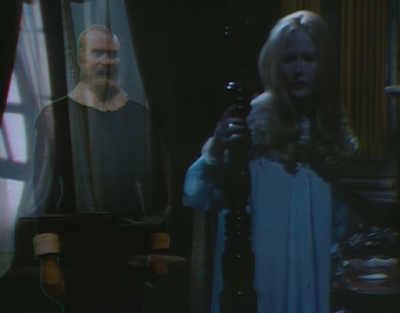 Julia asks Kendrick to change his mind. He says he will if that's what Melanie wants, but adds that she must get out of the house.

Kendrick returns to his room. He finds the bed empty, and Melanie gone. He calls to her. Julia comes upstairs and he tells her Melanie is missing. Melanie appears with a knife. She says she met him before, and he's not a Collins. She says her name is Amanda, and all in the house are destined to die. She attacks, but he's able to get the knife out of her hand. Julia says they must lock her in the tower room for her own safety. 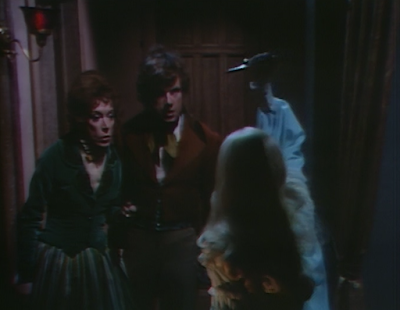 Julia brings Kendrick a drink. She says now he knows why Melanie can never leave the house. He says he agrees, only until the curse is done and finished with. The chandelier starts to swing. He asks what's happening. They hear laughter, and he asks Julia who it is. She tells him it's the ghost of Brutus Collins. Brutus materializes and says that she will not be sane again, until another Collins enters the locked room. 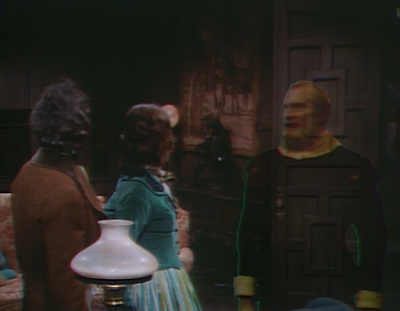 John: So do you think there's any chance of both Bramwell and Morgan both surviving through the end of next week? I'm anxious to see if Catherine's pregnancy is even mentioned again, or if that little detail is ignored for the remainder of the series. 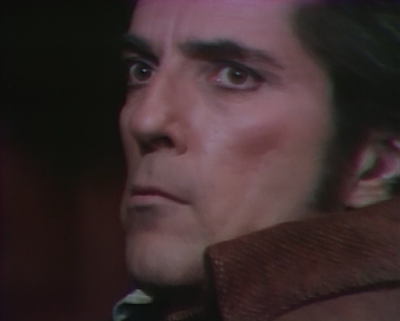 Christine: Anything goes at this point. I had expected Bramwell to say something about it to Catherine as he was warming her to the idea of honoring Daphne's dying wish.
John: Boom! Melanie and Kendrick are now married, and living in Collinwood! And now they're moving out. And now she's possessed... It really does seem like they're trying to condense these storylines into the few remaining episodes.
Christine: What has Brutus provided his 'servants' to murder the family with? If it's an awl, it doesn't seem to be a very sharp one. And why has the spirit of Amanda decided to be a killer? You'd think she'd want to attack Brutus, if anyone. 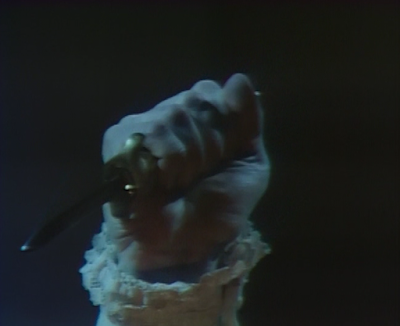 John: Do they keep family member flashcards somewhere? How is everyone able to recognize Brutus' spirit right away? And I may have said it before, but folks seem awfully chill hanging around ghosts. And what's with Brutus continually moving the goal-post? He wants another family member to go into the room? Why not just require the whole family going into the room. I would say there's no way all of this is resolved within the next week, but as noted above, at the rate the writers are going, they might just manage to cram it all in...
Christine: Brutus is really unimaginative though. He's so stuck on the locked room. Where are the zombie pirates to tear the place down? Where are the reanimated dismembered parts of evil people flying through the air and attacking people? Why doesn't he have the corpses of James Forsythe and Amanda rise up to do his evil bidding for him? I have to say, he's a bit more frightening with chunks of his head missing. 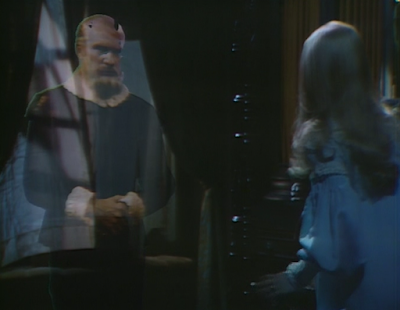