Desmond is in the cemetery below Gallows Hill. He walks a straight line until he reaches an unmarked tombstone. He finds a ring attached to it, which he pulls, and a door opens in the earth, revealing a staircase. He goes inside and finds a coffin, held shut by an immense cross. He opens a door at the head of the coffin, revealing a bejeweled mask. He attempts to remove the cross, but he cannot. He decides he'll need to get help. 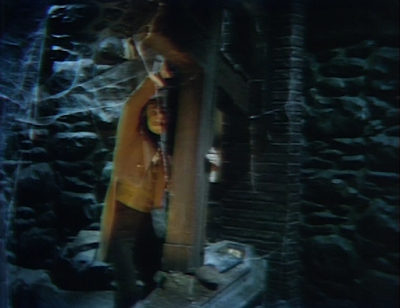 Desmond rises from the secret passage in the cemetery and pulls the ring to close it.

At Rose Cottage, Gerard wonders why Leticia couldn't see who Samantha would choose. Flora comes into the room and asks him if he loves Samantha. He nods, and says that she must remain with Quentin. She asks if he'll stay on after she makes her decision. He tells her that Desmond does not want him there, and she assures him that she will handle Desmond. She hugs Gerard as Trask enters. 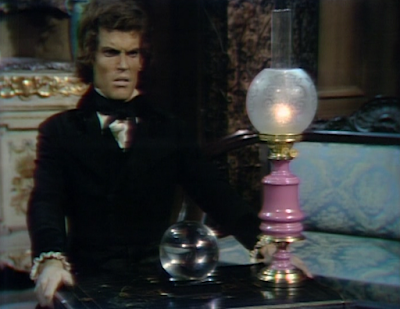 She asks him if someone has died, as he looks so mournful. He says he must speak to Leticia. Flora introduces Trask to Gerard, and then goes to fetch Leticia. Trask asks Gerard if he's responsible for bringing Leticia to Rose Cottage, and he says he did. Trask asks if Leticia has spoken to Barnabas. He says he thinks Barnabas might try to prevent her from doing her duty — finding his father's remains. Trask suggests to Gerard that he could benefit from helping him find out about Barnabas. He says Barnabas claims to have come from England on a certain boat, but he's not on the passenger list. Gerard offers to find the facts. Flora returns and says Leticia is not in her room. Gerard assures them that no harm can come to Leticia. Trask asks if he can wait, and she offers the two men tea while she drinks a brandy. 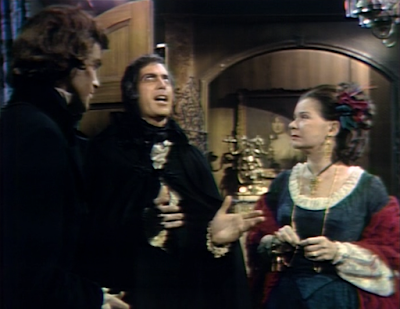 Desmond finds a drunk named Tim in a bar, and offers him $20 to help him. Tim asks if he wants someone beat up. Desmond tells him it's an errand of mercy, and tells him no questions, now or afterwards. Desmond says they're going to the Gallows Hill Cemetery, and they leave together. 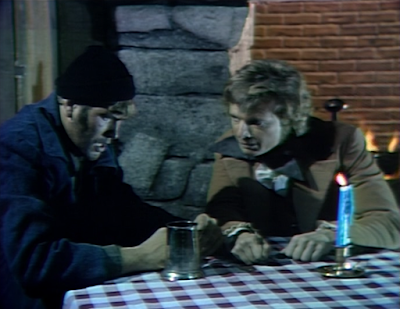 Trask explains that Leticia is helping him implement their maker's will. Flora asks what she did, and Trask says his father disappeared after entering the gates of Collinwood in 1797. She had a vision of his old house when asked for the location of he father's remains. Flora says that's where Barnabas' father lived, and Trask says he thinks that Barnabas' father had something to do with it. He warns Flora of the son of Barnabas, and suggests that she stay clear of him. He says Barnabas prevented him from searching for his father's remains. Gerard says that if he'd like to speak to his father's spirit, he can conduct a seance. 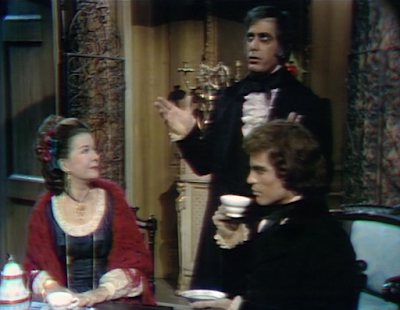 In the cemetery, Tim says this might not be a good idea. He watches as Desmond pulls a ring and a door opens in the cemetery floor. Desmond tells him to follow him down. Tim sees the coffin, and Desmond says they need to bring it back to his house. He tells Tim he's arranged for a carriage, and tells him to work on moving the cross. Desmond leaves him to his work. After he's gone, Tim opens the faceplate and sees the bejeweled mask behind the glass. He assumes it's worth a fortune. 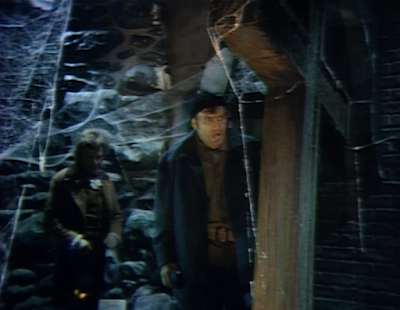 Gerard calls to Reverend Trask's spirit in a seance with Flora and Lamar Trask. They hear Trask's voice speak of evil in the room. Lamar asks him where. The voice says they are surrounded by evil. Lamar asks who killed him, and the voice says to beware the cross. 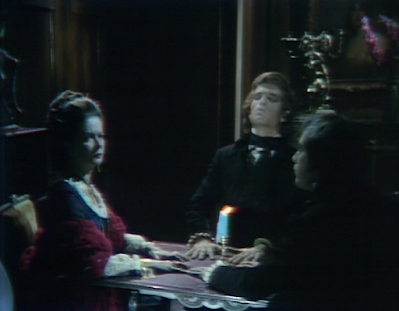 Tim knocks the cross off the coffin.

A door swings open, and Gerard warns them that the circle must not be broken. The voice tells them that evil will walk again. They don't notice the head in a box in the room with them.

Tim uses a rock to break open the coffin.

Gerard says they have learned no more. Whatever evil Trask was referring to, he wanted the seance ended.

Tim looks at a well-dressed, body. He removes the mask and is shocked to see there is no head underneath. 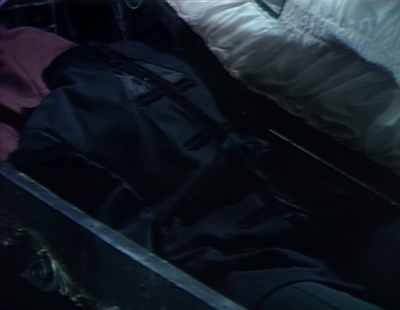 Trask says they must discover the evil, and Gerard says it's too late.

Tim admires the bejeweled mask, and turns to see something. He tries to attack it with a rock. 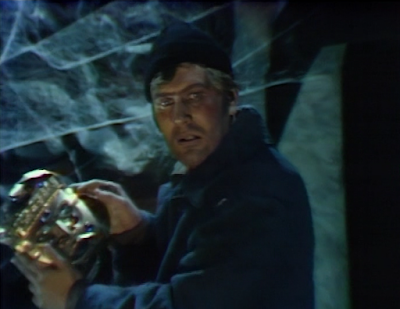 Out of the hole in the cemetery, a headless body arises. 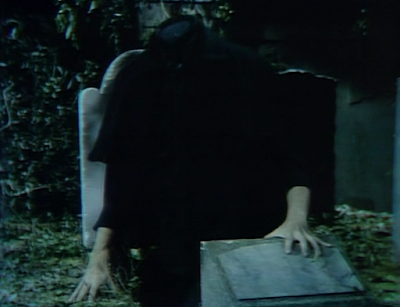 John: Um, in retrospect, why would they have buried the body in such a way that it would be accessible for someone to find it and set it free? I'm willing to stipulate that it couldn't be destroyed through any normal means, but unless there was going to be a custodian, like a knight of the crusades left to guard the holy grail, what was the point?
Christine: It would seem that whoever was trying to contain the evil would not have put a ring in a faux gravestone that would open the underground tomb, knowing that just anyone could stumble across it and heft the cross off the coffin, but if they hadn't done that, we wouldn't have a headless guy running around on a Monday!
John: And just like that, it's Seance-time, 1840-style! Break out the tracker! I was surprised that the head was present, both in that I was sure Leticia had removed it, and also because if it were visible, surely one of the participants would have noted a head in a box in the room with them... 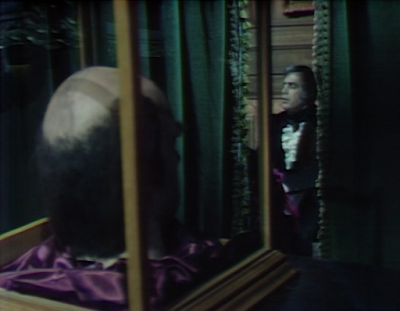 Christine: You would think it would have been noticed, especially with the drape parted the way it was, and in Trask's direct line of sight. Too bad his dad couldn't shine his ethereal flashlight on the head so they could have found it, or that Flora didn't recall the evil thing she knew to be in the room already.

John: I wonder why Tim didn't just break the glass and swipe the bejeweled mask? Once he did let it out, I was really hoping we'd get to see the headless body take him out, it almost was worth the visual of the headless body clumsily making it's way out of the grave! They spared us the bloody neck stump, but it just makes the headless body coming out of the ground that much more entertaining. I do hope the headless body will stick around for a while... I'd love to see it stumbling around Collinsport.
Christine: I don't think he could have squeezed the mask through the face plate. It certainly will be fun to have the headless corpse running around blindly in search of its head during the Halloween season! 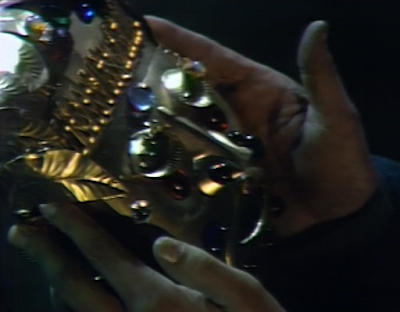 Episode 1070: Barnabas conducts; Julia and Professor Stokes participate; Carolyn speaks through Julia, providing the same six clues she wrote down before she died that portend the destruction of Collinwood, but is interrupted by the presence of Gerard before she can explain what they mean; held in the drawing room at the Old House in 1995
Episode 1079: David conducts; Hallie participates; a ghostly voice that sounds like David's repeatedly says, "Let us live!"; held in the Playroom at Collinwood in 1970
Episode 1126: Gerard conducts; Flora and Lamar Trask participate; the ghost of Reverend Trask informs them they are surrounded by evil and tells them to beware the cross; held in Rose Cottage in 1840
Posted by John Scoleri at 6:00 AM