Sam Evans is a prolific artist with a talent for being attuned to supernatural phenomena that he expresses on canvas. He has been commissioned to do portraits of Burke Devlin and Barnabas Collins, though Burke's was never completed, as he destroyed it. In Episode 42, he tells Liz that Paul Stoddard had asked him to paint a portrait of him like that of Jeremiah Collins. His collection of work is often displayed on his easel and throughout the studio in the cottage he shares with Maggie. While many paintings can be seen in the Evans' cottage, I will focus primarily on those that are prominently featured and appear most often. The titles of paintings are mine, unless otherwise noted.

The first supernatural portrait Sam Evans is compelled to paint is that of Laura Collins the Phoenix in Episode 133. While it disturbs him to paint her surrounded by flames, he can't seem to stop himself, and makes several versions, which seem to be imbued with a strange power. In Episode 146, Laura puts a spell on Sam, which burns his hands, effectively ending his ability to paint her as the Phoenix. After Josette appears to complete the Phoenix portrait with David's face, Roger burns it in the fireplace in the drawing room.

Barnabas commissioned Sam to paint his portrait for $1,000 in Episode 222. Sam worked in the evenings painting it at the Old House, but when nearly complete, took it home to finish, and delivered it to Barnabas in Episode 255, who placed it over the mantel where Josette's portrait once hung. 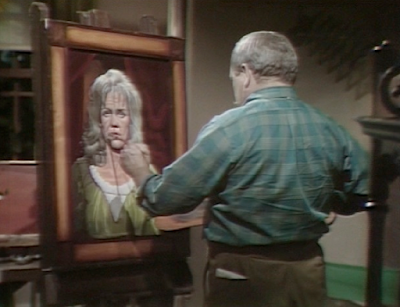 Barnabas commissioned Sam to transform Angelique's portrait for $500 so it would appear that she had aged 200 years, in the hopes that it might get rid of her once and for all. Sam's artistic expertise, in addition to his affinity with the supernatural, seemed to provide him with success, and Angelique showed up at his doorstep in an advanced state of decay, demanding the portrait back. Unfortunately, Sam did not learn from his experience with the Phoenix, and after refusing her demands, found himself unable to see, leaving him helpless when she snuck back in and stole the portrait. He subsequently died in Episode 518, soon after experiencing Angelique's terrifying dream curse.


More of Sam Evans' work will be added as it appears on the show.

Always liked seeing Sam at his easel! You could also do a post on Charles Delaware Tate with his paintings of Quentin and Amanda Harris.

I will definitely do that when we come to those episodes. Thanks for commenting, NightOwl!

I've been a fan since the show aired and the "Dead Marlin" painting has driven me crazy for many years. I see the fish but can't make out the rest of the painting. I wish there were clear photos of these. Thanks for this informative look at the works of Sam Evans. Too bad we don't know who actually painted the many art works in Dark Shadows.

Christine, I would love to share with you a version of the docks in Collinsport - getting ready to varnish this morning and frame it as I finished it yesterday. It has a couple of slight variations from the original but pretty faithful to the original.