Buffie takes Barnabas back to her apartment. He compliments her on the painting on the wall. She says that someone gave it to her, and when she thinks about him, she doesn't like it so much. She offers him a drink and he declines. She says it's like his eyes can see through her. He leans in to bite her neck, and she screams. He drops her body to the floor, and Cyrus bursts into the room. He asks what happened. Barnabas says he doesn't know. He says he came in when he heard her scream, and Cyrus says he did the same. Buffie comes to, and asks what happened. Barnabas asks her to tell them what frightened her. He asks her if she saw something in the room, or at the window, and she says she saw someone looking in the window. Cyrus checks the window and says he doesn't see anyone. Barnabas asks her if she imagined it, and she says that perhaps she did. 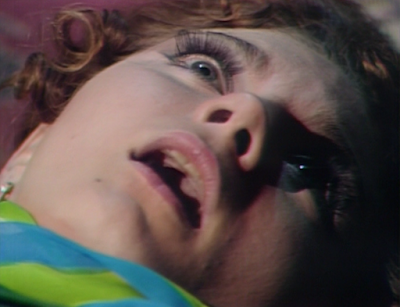 Cyrus tells her that he's happy she's alright. Barnabas offers to stay with her until she feels better. Cyrus offers to examine her, and she tells him she's fine. Barnabas reminds him that he must have business to attend to that brought him to this place at this time of night. Barnabas dismisses him with a goodnight, and listens as he hears Cyrus walk away. Buffie asks Barnabas to explain what happened. He says that she will do exactly as he tells her. He says she will not go near Cyrus, and she agrees. He tells her to rest, and adds that they will see each other very soon. 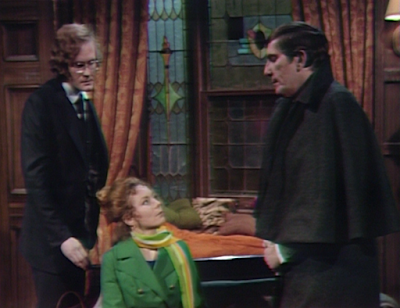 Maggie asks Quentin why he didn't mention that Angelique was murdered. He says it isn't true. She asks why Alexis would tell her that if it wasn't true, and he says she can believe what she wants.

Angelexis arrives home with a bunch of flowers. She goes to get a vase to put them in. There's a knock at the door, and Cyrus comes in. He compliments Maggie on the flowers. She puts them down and goes upstairs so they can talk privately. 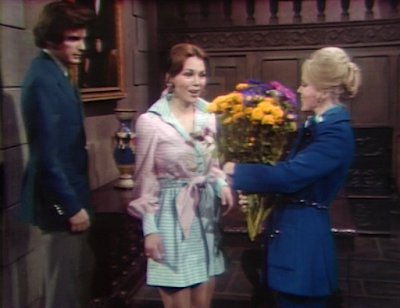 Cyrus tells Quentin that the temperature of Chase's body was so low, he would have to say that he froze to death. 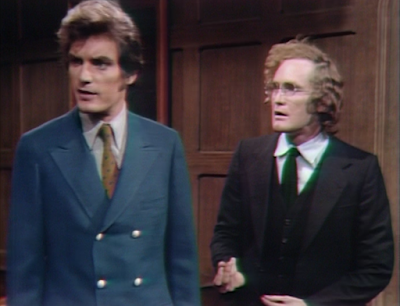 Angelexis waves her hands over the flowers Maggie left in the foyer, causing them to rot. 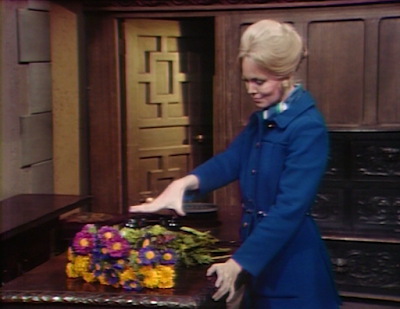 Cyrus tells Quentin that if there are any new findings, he'll let him know. Quentin asks if what happened to Chase might be related to what happened to him. Cyrus says he doesn't know, and leaves. Quentin sees the flowers have rotted as Maggie comes downstairs to see them.  Angelexis comes in and says they were so lovely and fresh when Maggie had them, and now they appear to have frozen and died. That causes Quentin some concern. 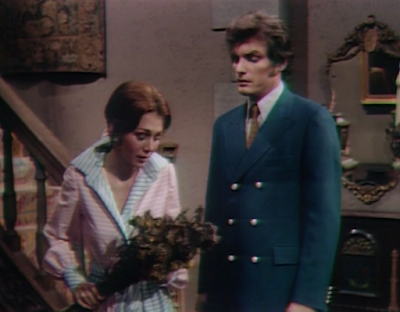 Cyrus checks on Buffie, and she explains that she just has an overactive imagination. She tries to get rid of him, and he presses her on Barnabas Collins. Before he leaves, she asks if he's heard from John Yaeger. He asks if she misses him. He adds that he hasn't, but if he does, she'll be the first to know. 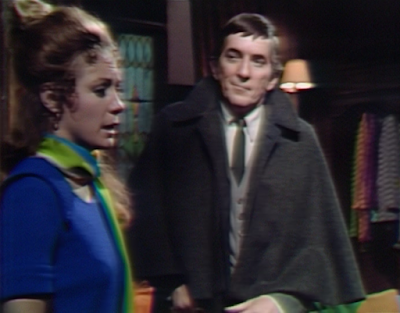 Angelexis finds Maggie in the drawing room. She says she may know how to find Angelique's murderer. Angelexis says that the killer might be focused on denying that a murder was committed. Maggie is confused, saying Quentin just said this morning that he didn't think she had been murdered. Angelexis says she had forgotten about Quentin, and hastens to add that he couldn't have killed his wife, could he? 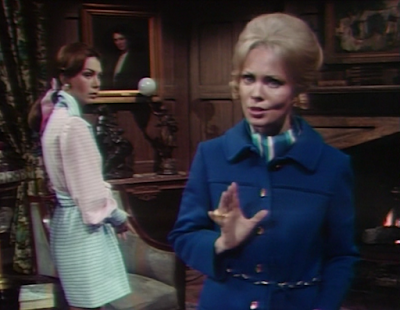 Maggie is getting ready for bed when Quentin comes in to the room. He tells her he has some things to take care of downstairs, but they shouldn't take long. She says she's happy to be back, and he says he is, too. She apologizes for bringing up Angelique's murder. 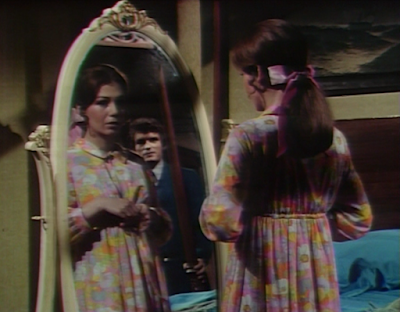 Cyrus says he was surprised to receive an invitation from Buffie. She says she has some things Yaeger gave her, and she wanted to get his address to send them back. He asks if she wants to see him again. She says she wants to forget about him, and asks again where he is. Cyrus tells her that if she waits long enough, she'll see John Yaeger very soon. He leaves, and she wonders why he is protecting Yaeger. 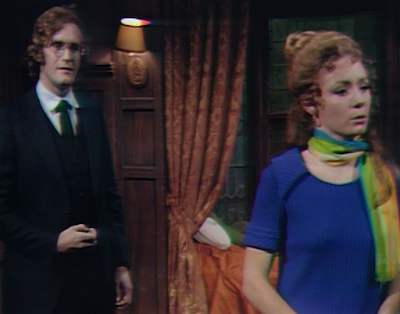 Maggie dreams of the seance. Quentin gets up and puts his hands around Angelique's throat. Someone shouts, "murder," and Maggie wakes up yelling that, "she was your wife, Quentin!" 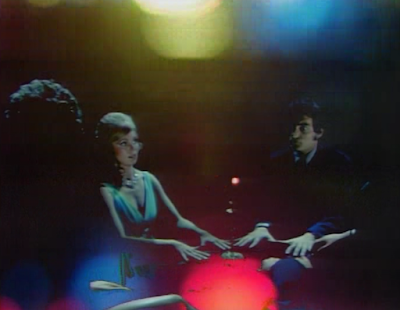 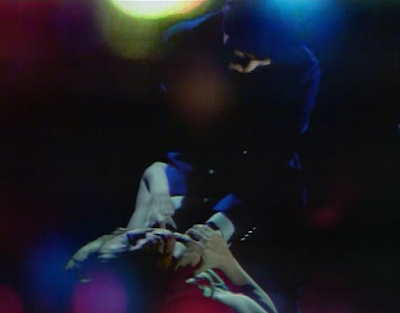 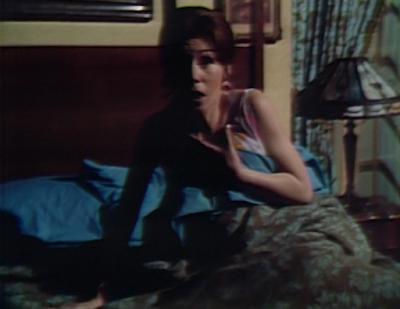 John: Cyrus came in immediately after Buffie screamed... and yet he still believed Barnabas' story that he too came in after hearing her scream? I hope he's a better doctor than detective...

Christine: I wonder if Frid may have flubbed his line and accidentally stole Cyrus' excuse. That didn't really make sense. Cyrus seems intent on getting his Yaeger fix by making a connection with Buffie. Has he forgotten that he has a fiancé?

John: In an excellent example of doublespeak, Cyrus tells Buffie that if she waits long enough, she'll see John Yaeger very soon. And if she doesn't wait long enough, does that mean that she won't see him for a really long time? And I thought parallel time was confusing...

Christine: Maybe Christopher Pennock was the one flubbing lines today.

John: Do dream seances get counted in our tracker? How about appearances of Buffie's monster art, which made a nice curtain call in today's credits? And if that weren't enough, we get a, "Dark Shadows is a Dan Curtis production," voice-over! How long has it been!

Christine: That's the heartwarming voice of Bob Lloyd, who last announced for Dark Shadows in Episode 330. It sounded like they used a recording of end credits from long ago. It has me fondly remembering the early days of Dark Shadows. I'm not sure a dream séance really counts for the tracker, but I'll add it anyway, just to be completist. That little monster has a story to tell. I wonder what it is. I noticed Buffie also has Raggedy Ann in her apartment. Is it an attempt to suggest some youthful innocence in Buffie? That doesn't seem to fit with her character. 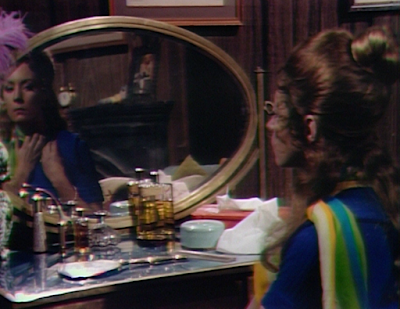 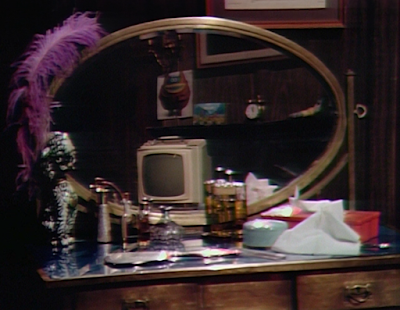 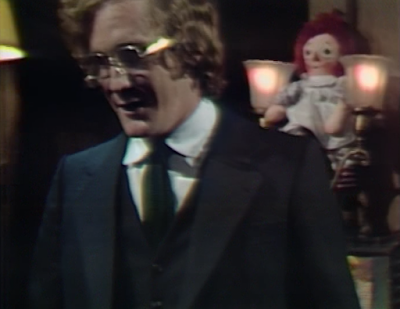 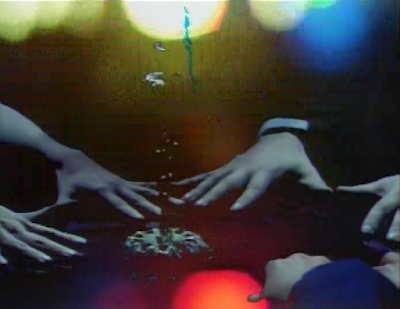