Vicki walks out to Widow's hill and looks over the cliff at the rocks below. She remembers Stokes claim that the only way she can join Jeff is to die. She is shocked to hear Liz scream, and Stokes warns Liz not to approach Vicki, lest she jump. They plead for Vicki to step away from the cliff. Liz asks if Jeff would want her to jump. Stokes tells her that Jeff isn't responsible for her standing there. He tells her that Jeff is trying to reach her, and she needs to wait to hear from him. Stokes leads her away from the cliff, back towards Collinwood. 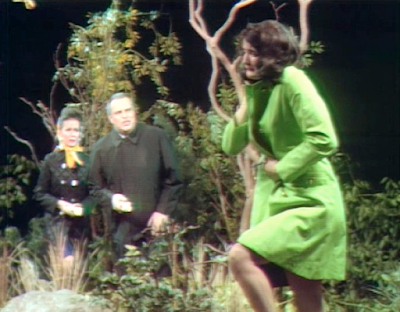 Chris and Carolyn return to Collinwood, and she invites him in. Carolyn brings up the dead waitress from The Blue Whale. Chris tells her he should be getting back to town. She asks him to stay until someone comes, and he agrees. 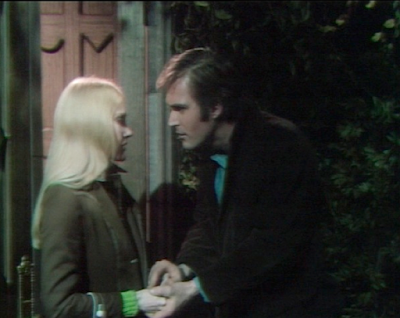 Carolyn says the animal that killed the girl is the same one who attacked her mother. She notices that he's not listening to her, and he tells her he's more upset about the dead girl than she is. Liz, Stokes and Vicki come in. They take the crying Vicki upstairs. 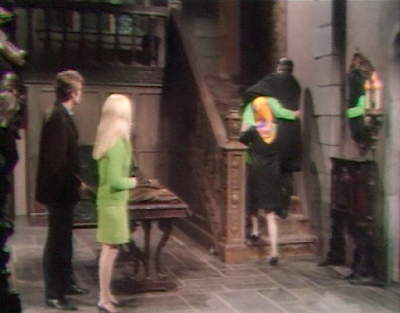 Carolyn asks Stokes if Vicki was attacked, and he says, "Just by fate."

Liz tells Vicki she's trying to understand. Stokes enters and apologizes to Vicki for saying what he did. Vicki tells him she panicked when she thought she'd never see him again. The windows blow open and Vicki thinks it's a sign from Jeff. She picks up Jeff's watch and says it had started to move yesterday, but it was back to the original time. And now it has started again. Liz suggests Stokes has psychic powers, and asks if he can sense anyone there. Vicki asks Jeff to tell her what to do. A glowing light appears, which Vicki claims is Jeff. She smiles, and then says the watch has stopped. She tells the others that now they know it's not her imagination. Stokes leaves them and Liz apologizes for not believing Vicki. 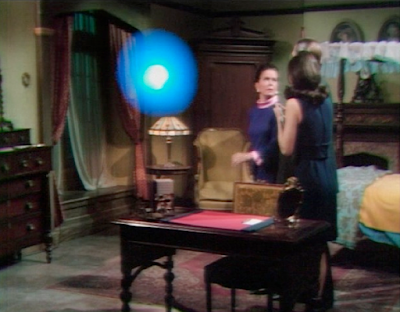 Carolyn tells Chris that she wishes they could do something to help Vicki. Stokes comes downstairs and says the room will do. He then introduces himself to Chris. He says he needs another man present in case the spirit needs to speak through him. Chris asks what he means, and Stokes says they are going to hold a seance. Chris declines to help them, saying he doesn't believe in that stuff. Stokes explains that they kept Vicki from killing herself tonight, and they need his help to prevent it from happening again. 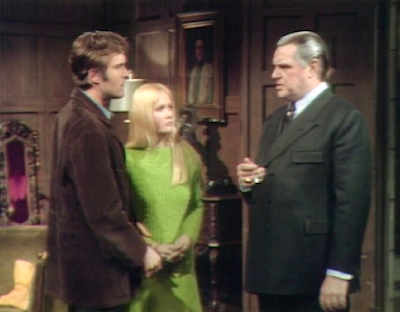 Stokes tells Liz and Vicki that he wants to hold a seance. Liz says she doesn't want to after the last time. Vicki says if she's called back to the past, then it's because that's what Jeff wants. She asks how soon they can start.

Carolyn tells Chris that she was afraid the first time, too. Vicki and the others come in. Stokes asks Chris to ensure the windows are tightly closed. He tells everyone where to sit, and once they've taken their places he begins the seance. 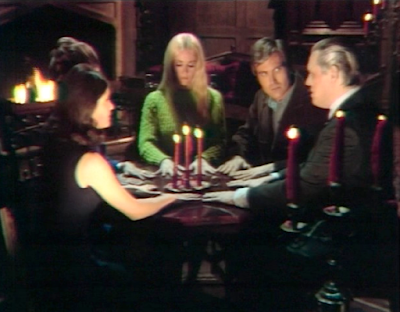 Stokes calls for Jeff to come forward. Stokes senses a presence in the room. He asks if it's Jeff, and Vicki says he's not. Stokes asks who is there, and why they came. Liz turns her head and says someone was staring at her, and then adds that she felt a woman's hand. Stokes calls for the spirit in the room to tell them what it wants. Carolyn begins to whine. She says she heard the widows' wailing, and adds that the must stop him. Stokes asks who they must stop, and she says he must not come back. Stokes asks if she means Jeff, and she says no. She says they must stop them, and he must stay where he is. Stokes asks who she is, and she says Magda, and mentions her curse. Stokes asks about her curse, and as Carolyn convulses, Chris breaks the circle. Stokes says whoever was there is now gone. Vicki runs off and Liz follows her. Stokes tells Jennings he'd like to know why he did that. 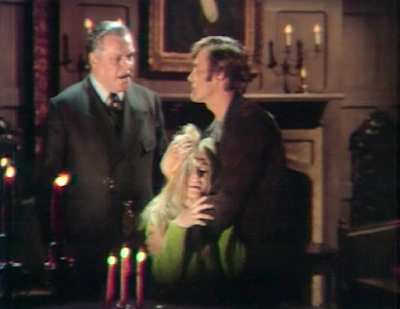 John: I'll admit that even though it's early in the week, I half-expected Vicki to take the Widows' Hill express to 1795 today.

Christine: I can't help wondering if the new ghost in town, Quentin Collins, is the one showing up as an astral manifestation, and not Vicki's hubby, Jeff Clark.

John: I'm sorry, if the moon was full last night, odds are that the moon would be full tonight, too. So what exactly is Chris Jennings doing out on the town, and then hanging around Collinwood, not to mention partaking in a seance, when he's likely to fur up at any moment?

Christine: Perhaps the moon is waning. Chris does not seem particularly remorseful about shredding the Blue Whale waitress, though perhaps he didn't want to let on to Carolyn that he's an animal.

John: Poor David missed another seance! So now we've met Magda, another curse-giver. Sounds like the kind of gypsy name who might curse someone with lycanthropy to me...

Christine: David and Amy probably had their ears pressed to the drawing room doors. It's clear from past seance precedent that whoever interrupts the medium at the seance has got something to hide. We know Chris has a secret, but what does he know about Magda to fear she'll expose him? Also, are Carolyn and Chris already an item after one night of drinks? It seemed rather intimate of him to grab her and put his lips on her head considering the few times they've dated. 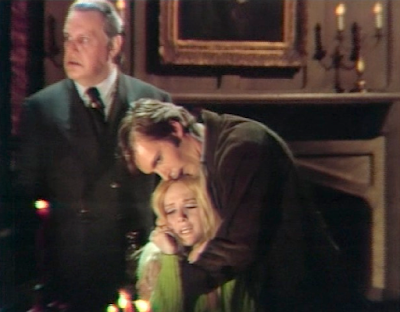 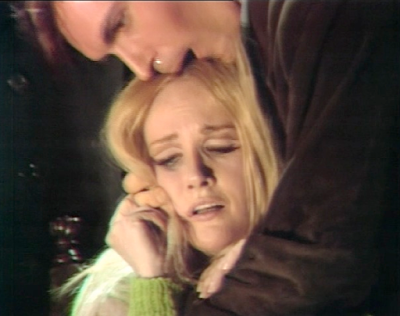 John C., Houston TX: I guess you missed the scene when we heard that Carolyn and Chris have a history. They dated a few times before she met Chris' cousin, Joe Haskell.