Barnabas, dressed in his 100+ year-old clothes, sits reviewing a book of family portraits. Willie asks when everyone will arrive. He explains that the family are all looking forward to the evening. He tells Willie that Roger and Elizabeth are coming dressed as his parents. He turns to a page with Jeremiah's portrait, and Willie asks why he doesn't like him. Barnabas explains that he stood in his way with Josette, and that with Burke Devlin in that role, they will meet again. He tears Jeremiah's portrait out of the book. 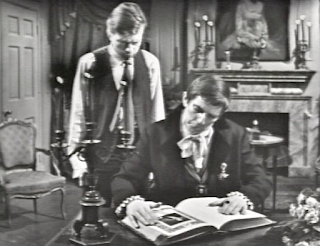 Carolyn and Roger are dressed in their period costumes. She explains that she's nervous, and feels odd wearing the clothes. Roger says he's looking forward to it, despite Vicki's inviting Burke. Liz walks in wearing Naomi's dress. She says she really doesn't want to go to the party. Roger says he'll take her home early if she'd like, but she must at least make an appearance. Vicki enters and Roger says she looks just like Josette Collins. Vicki says she'll wait for Burke so the rest can go over. 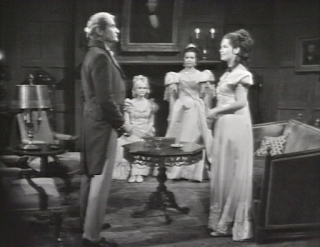 Barnabas speaks to the portrait of Josette, and tells her not to disappoint him this time. He opens the music box, and Willie enters telling him that the guests have arrived; except Vicki and Burke. He asks what Barnabas is doing with the music box. Willie says he shouldn't try to give it to her. He says Vicki won't come to him willingly, nor would Burke allow her to go to him. He asks what he's planning to do with the music box, and Barnabas ignores him, going downstairs to see his guests. 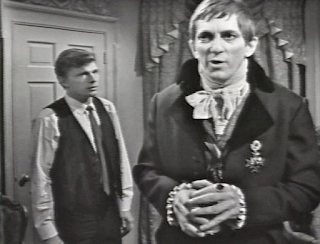 Roger says he feels as if they've stepped into the past. Liz and Carolyn are less excited than he is. Barnabas walks in and welcomes them. Carolyn says that Barnabas looks like his ancestor, and he says they all do. He starts to refer to Liz as his mother, and Roger as his father. Roger tells him he'll be amazed by Vicki's similarity to Josette. Carolyn thanks Barnabas for allowing Burke to come. Roger says it's good there's a Jeremiah to escort Josette. Carolyn says she heard they were very much in love, which Barnabas quickly dismisses as untrue. 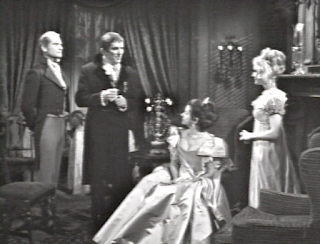 There's a knock at the door, and Barnabas lets Vicki in. He compliments her, and when Burke extends his hand to Barnabas, he initially refuses to shake it. Burke apologizes for their late arrival. Barnabas proposes a toast to the past, and all the remembered glories.Vicki says she feels as though she's in the past. Roger says it's the candlelight. She says that when she put on the dress, she really felt that she was Josette. A bell strikes eleven o'clock, and Roger speaks of ghosts. Carolyn points out the candles are flickering, and Liz comments on how cold it is. She says she felt a hand on her shoulder. Barnabas looks around the room for the cause of the disturbances. 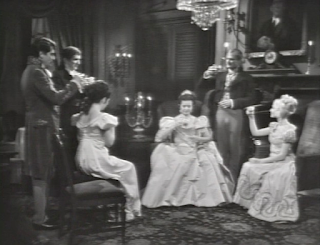 Barnabas explains the house does work on one's imagination. Roger suggests it could have been a ghost trying to contact her. He suggests that they should have a seance, to try and speak to one of their ancestors who is trying to contact them. Barnabas says he doesn't like parlor games, but Roger counters that they've had a successful seance in the past. He presses on saying it would make for the evening's entertainment. Barnabas protests, lest the ladies be frightened, and Roger asks if he's the one who's afraid. Liz says it's best to humor Roger, despite being a waste of time. Carolyn is reluctant, and Burke leaves it up to Vicki. She agrees to try it, so they move a table into place. 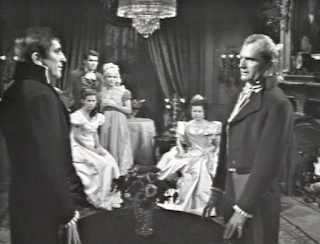 Roger places a single candlestick on the table, and they arrange chairs around the table. Roger coordinates the seance, with Barnabas reluctantly playing along. Roger asks who's in the room with them, and implores them to speak to the group. Barnabas asks to put an end to it when Liz suddenly describes a piercing cold. Carolyn says there's something in the room as the candles are blown out and the front door swings open. Burke suggests they stop, Roger agrees, but before they can, they notice Vicki has gone into a trance. Barnabas stares intently at her... 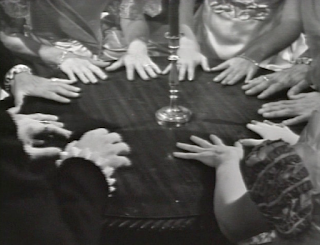 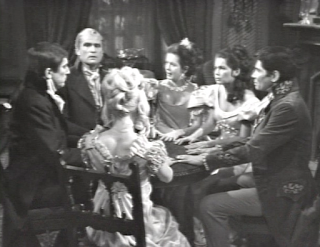 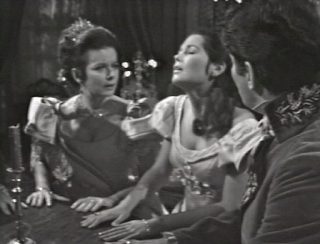 John: So much for respecting family history, as Barnabas destroys the book of family portraits!

Christine: That was surprising to see. The family should be careful not to leave him unattended in the Collinwood drawing room, or Jeremiah's portrait may end up like the portrait of Laura Murdoch Collins. It looks like he switched his ring to the other hand so it could be gloriously displayed while viewing the family album. Elizabeth looks like a party pooper, but still dazzles with her sparkly jewels. 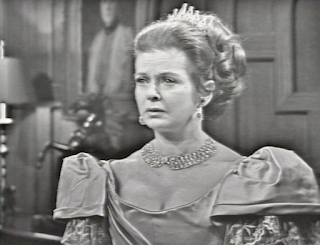 John: Call me crazy, but I was expecting a dinner party. Let this be a lesson to all of you. If you host a party, and don't plan activities, your guests might very well kick off a seance.

Christine: I thought Willie might serve up some hors d'oeuvres with the Claret Punch at the very least, though it appears he may have been hiding out in the servant's quarters while the family gathered. It was great to see Barnabas snap when Carolyn mentioned how much in love Jeremiah and Josette were, and then shoot daggers at Burke when he arrived. 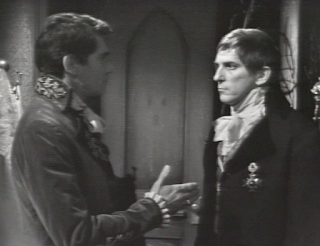 John: Who'd have thought that Roger of all people would be the one to run the seance. If I recall correctly, he wanted nothing to do with the last one at Collinwood. 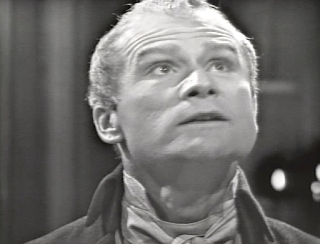 Christine: It was rather rude of him to push it after Barnabas protested and was clearly upset by it, but it would have been boring to watch them sit around and drink Claret Cup. David is going to be unhappy that he wasn't invited to the party, especially after hearing they had a séance without him. We finally get an explanation for the bell we've heard ringing at the Old House. Apparently, it's the chapel bell down in the valley that lets Barnabas know when it's time to get up.

I'm not sure I can take much more of willy's whining. He's such a drag on the B-mans energy.