Few portraits have been on display in the Old House, and Josette dominates here. When Barnabas hangs Josette's portrait over the mantel in 1795, he is letting Angelique know where she stands, which could be why she later chose to have her own portrait appear above the mantel, ousting a Collins family relative. When Barnabas moves Josette's portrait to her room so he can hang his own portrait above the mantel in the parlor in present day time, he is reclaiming the Old House as his.

Josette's portrait is first seen hanging over the mantel in the parlor of the Old House in Episode 70 when David leads Vicki there to show it to her. He tells her that Josette's spirit is condemned to stay in the Old House until a third girl dies on the rocks below Widows' Hill, and suggests Vicki may be the third girl. Once they leave the Old House, Josette's ghost emerges from the portrait and dances on the porch, thereby becoming Dark Shadows' first real evidence of the supernatural. David often communicates with her through the portrait, usually to ask advice or inquire about unsolved mysteries. She seems to be especially protective of David and Vicki.


Barnabas commissioned Sam to paint his portrait for $1,000 in Episode 222. Sam worked in the evenings painting it at the Old House, but when nearly complete, took it home to finish, and delivered it to Barnabas in Episode 255, who placed it over the mantel where Josette's portrait once hung. 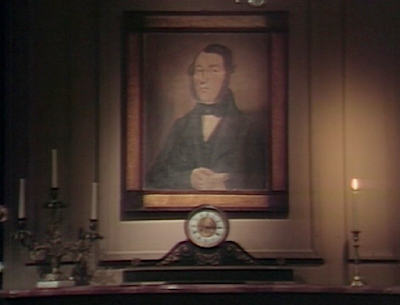 It seemed safe to call this unidentified ancestor Mr. Collins, whose portrait is first seen in Episode 367 hanging above the mantel in the parlor in 1795. I'm guessing that it's Jeremiah, Joshua and Abigail's daddy. It was replaced by Josette's portrait in Episode 405, and then returned after Barnabas moved her portrait to her bedroom. Angelique's portrait materialized over it in Episode 449, and even stole the frame!


In Episode 463, Vicki buys the portrait, which Barnabas unsuccessfully attempts to destroy, as it seems as indestructible as Angelique. Roger becomes possessed by the portrait and finds himself acting against his own will. It's reappearance now makes it technically a Collinwood portrait, but I've decided to add information here for simplicity's sake.


In Episode 499, Sam Evans alters the portrait to age Angelique at the request of Barnabas Collins. You can find more information about this event on the Works of Sam Evans page.

In Episode 521, Joshua reveals that he found the portrait in a locked closet, which no longer depicts crusty, old Angelique, but is faded, presumably because she had been exorcised by Trask. Nicholas Blair attempts to communicate with her through the portrait to determine where she was exorcised. After he finds her ashes and restores her, the painting resumes its original condition in Episode 527.

After Angelique disobeys Nicholas Blair and tries to kill Adam, he removes her powers, making her human, and in Episode 547, the portrait changes, as Angelique becomes an old crone once more.

When Angelique appears to die from her advanced age in Episode 548, she is no longer visible in the portrait, which looks decayed.

In Episode 739, Barnabas locates a portrait of Jeremiah's first wife in an old trunk of his. In Episode 740, he tells Magda of how he watched her pose for the portrait in the drawing room at the Old House when he was a boy.


Stay tuned for updates on portraits from the Old House, as we make our way through the series.

Has anyone noticed that the portrait of Josette looks nothing like Maggie Evans even though everyone in the cast makes it sound like she's almost a reincarnation of Josette?

In the remake done in the 90s the portrait of Josette does look like Victoria Winters. In that version, Victoria is apparently supposed to be the reincarnation of Josette (in fact, Barnabas remarks to that effect in one of the episodes).