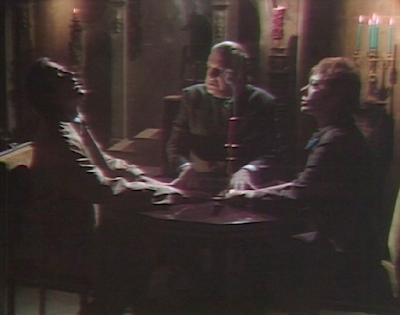 Stokes calls for Reverend Trask's spirit. Tony begins to moan, and says Ben Stokes does not need him. Stokes says he's not Ben, but Angelique is back, and he can finish her off and rest in peace. The candle goes out, and the brick wall behind Tony begins to push outward. Julia screams that he's coming out and the bricks open, revealing Trask's skeleton. 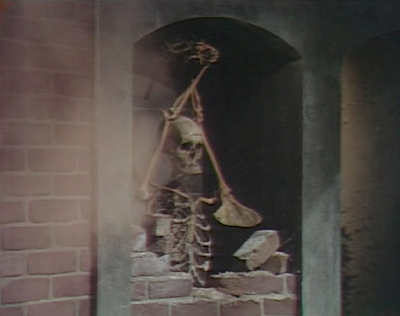 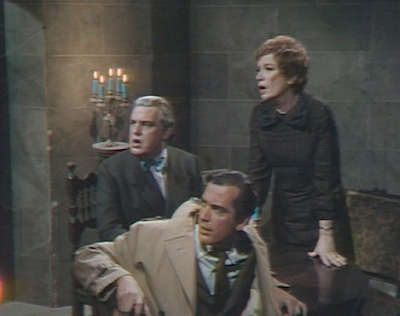 Tony says he senses another presence, and Stokes calls out for Reverend Trask to show himself. Tony appears to be in a trance, and Stokes tries to get his attention. Julia suggests that Trask's spirit might have inhabited Tony's body. Tony says he's going home, and Julia begs for him to stay. He agrees to stay, but refuses to believe a spirit is inhabiting his body. Stokes calls out that the witch is in Collinwood, calling herself Cassandra. Music begins playing upstairs, and Julia says, "Adam!" Julia tells Stokes he doesn't need to accompany her, as Reverend Trask isn't playing the music, and he says he's very interested to see where she's going. They find David playing music. Stokes introduces himself to David, and asks what he's doing in the house. David says Julia promised he could play the tape recorder. Julia offers to let David take the tape recorder, and Stokes realizes that he can't let Cassandra know he's still alive. Julia asks David to lie and not mention seeing Stokes, and David agrees. 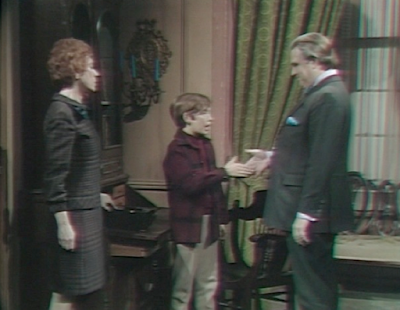 After David leaves, Stokes asks Julia who Adam is. She says she knows no Adam. Stokes says he recently met an Adam—a scarred giant of incredible strength. She says she doesn't know anyone matching that description. He says he saw him after he had the dream, and after he made the leap from Widow's Hill. Stokes asks who she's protecting when Tony calls to them from downstairs. 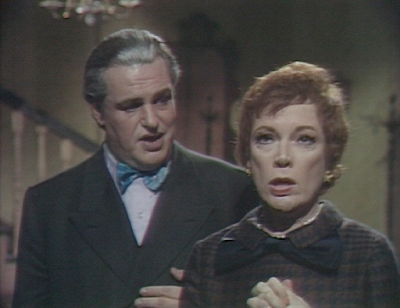 Stokes and Julia arrive downstairs to find the skeleton is gone. Tony says he closed his eyes for a minute, and when he opened them again the skeleton was gone. Stokes says their friend Trask is here. He asks for a sign. There is none, and Julia and Tony go upstairs. Stokes then hears a sigh, and speaks to Trask, letting him know that he can right his wrong, and then rest in peace. 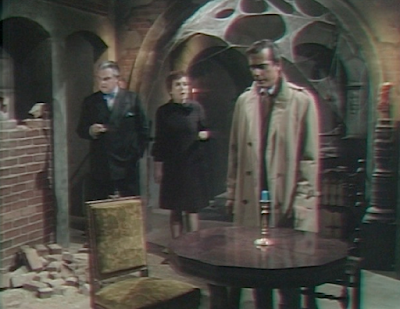 At the main house, Julia stares at the clock when David comes downstairs. He tells her he hasn't told anyone about the old house. She asks if Mrs. Johnson said when Barnabas would be back, and he says about noon.

Barnabas returns home and finds a note from Julia. He hears a noise and calls to Adam. He then hears footsteps, and he goes downstairs to find the brick wall exposed where Trask had been walled in. He calls out Trask's name, and from behind him, Reverend Trask announces his presence. He explains he is free to get his revenge. Barnabas explains it was an ancestor of his. Trask asks how he knew his name if he isn't the Devil's helper. Trask places his hand on Barnabas' shoulder, and he falls to the ground. 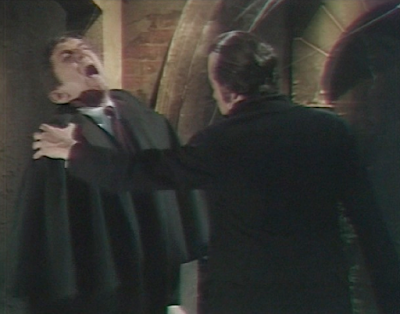 Julia returns and calls for Barnabas or Willie. She sees her note, unopened, and leaves, assuming Barnabas will read it and come to Collinwood.

In the basement, Trask has placed Barnabas in the opening in the wall where he had been previously walled in. 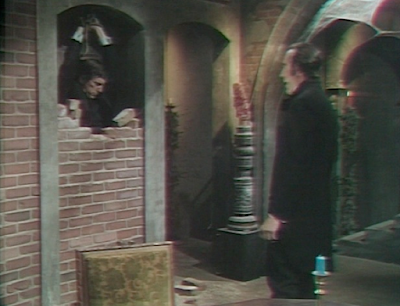 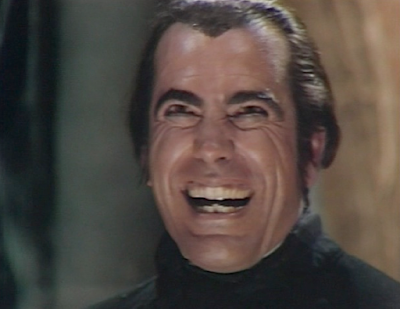 John: Couldn't the prop guys have gotten a skeleton that didn't have a flip top skull? I'm curious if this is the re-purposed skeletal bride from the dream curse...

Christine: It IS the same skeleton! Trask is the skeletal bride! That piece of tape holding the cranium together is on both, and the toothless jaw and wonky ribs are the same! What could Trask, dressed as a bride, possibly symbolize in Julia's dream? Chastity perhaps? Or a desperate longing to be loved? 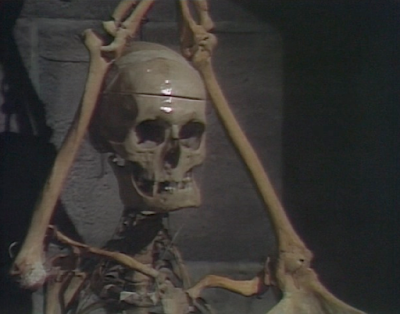 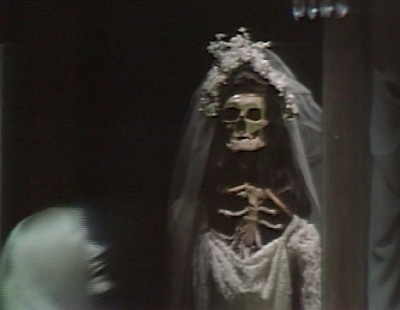 John: If the seance started around midnight, what's David doing lurking around the old house in the middle of the night?

Christine: I think he was planning to break in to steal the tape recorder while everyone was asleep. Will he hear Dr. Lang's recording, or will David tape over it with him singing along to his 45 rpm record of Yummy, Yummy, Yummy?

John: We'll forgo the discussion as to just how the ghost of Trask managed to get Barnabas' body into the partially opened wall, because it's a cool image to see the tables turned. The question is, will the ghost be able to do the necessary construction work to wall him in?

Christine: I assumed that Trask's spirit had inhabited Tony Peterson's body as Julia suggested, since he's proven to be easily manipulated by supernatural entities. I wonder why the touch of Trask's hand took Barnabas down, screaming in agony. 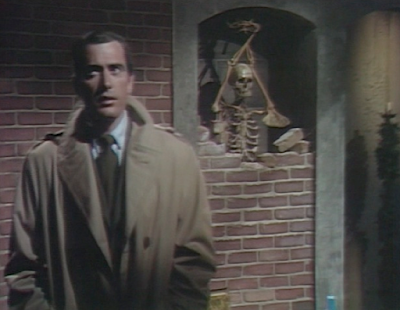 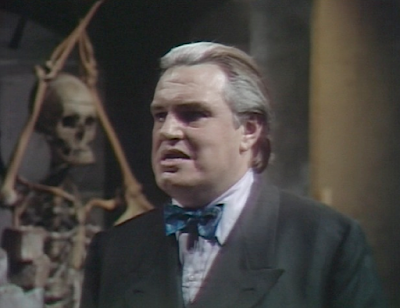 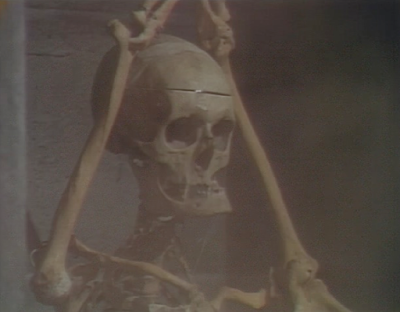 Dark Shadows Before I Die Round Robin Nightmare tracker: