Morgan tells Julia and Kendrick he knows where Catherine's real affections lie. He asks if she'll love Bramwell in the morning as she loves him now. 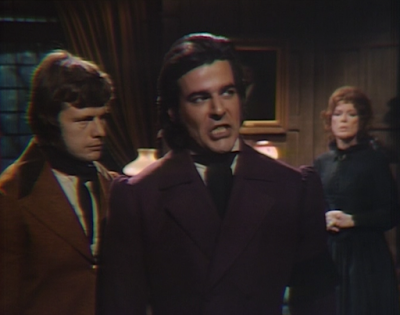 Catherine goes to the locked room and pounds on the door, calling to Bramwell. He stirs. He calls to her, and manages to stand up. He tells her he's alright, and asks if she can open the door. She explains that Morgan has the keys, and is determined to have Bramwell spend the night in the room. Catherine says he has hidden the key. Bramwell tells her Morgan is insane. He says he can't break down the doors. He tells her that he'll stay and do what he must do. She promises to stay outside the door throughout the night. He tells her that it's best as well that she doesn't stay by the door. She asks how he got her there. He reads her the note that Morgan sent him, saying he knew the truth. She asks what he means by the truth. Bramwell says he must know about the child. She doesn't know how he could have found out. Bramwell tells her that she must go downstairs and face Morgan. He tells her he'll look after himself. 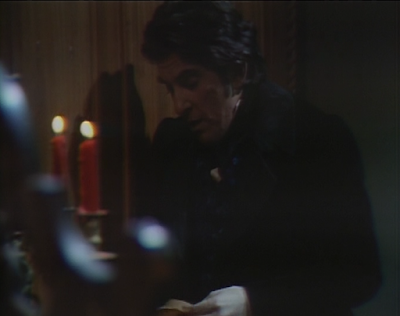 Julia tries to talk sense to Morgan. He says Bramwell will spend the night in the room, and end up dead or insane in the morning. He says it makes no difference who goes into the room, and tells Kendrick that Bramwell is eminently more qualified than him. Kendrick promises to hold Morgan responsible if Melanie is not well after the night is over. Julia intervenes before they begin to fight. She asks Morgan to explain why he did this. Catherine returns, and Morgan tells Julia that she should ask the little mother. They all look at Catherine. Julia asks her what that means. Catherine asks to see Morgan alone. Julia demands an explanation first. Catherine tells them that she is going to have a child. Julia congratulates she and Morgan. Morgan says that he'd like to discuss something with Catherine, and they go upstairs together. Kendrick says he doesn't understand, and Julia says she's beginning to. Kendrick asks her what is going to happen to Bramwell. She says no one knows what happens to people in the room, only what happens to people afterwards — death or madness. She mentions that Morgan took her there during the day, and into a separate room with two perfectly preserved corpses. She says Bramwell must not touch either of them. She says that she must warn Bramwell.

Bramwell is sitting in the room when a wind appears. He tells Brutus that he has been waiting for him, and asks him to show himself. He goes to the secret door and goes inside. Morgan finds the perfectly preserved corpses. He approaches Forsythe's corpse and reaches out to touch it. 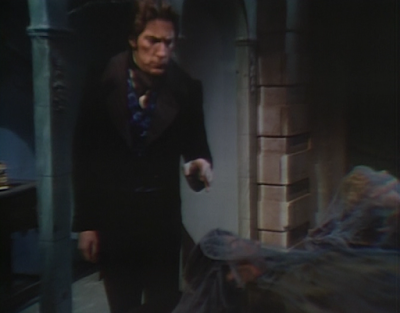 Kendrick and Julia arrive outside the room. She pounds on the door and calls to him. He hears them and comes running. She asks if he found the secret room. He says he just did. She warns him not to touch either of the corpses. She says that's how Morgan was possessed. She explains why Forsythe and Amanda are in there. He asks if she can tell him anything else, and she says no. He asks about Catherine, and she says she's with Morgan. Julia tells him that they're praying for him.

Bramwell goes back into the secret room.

Catherine and Morgan go into their room. She says she doesn't know how to begin. She admits that she has done him a great wrong. Morgan asks if they were intimate from the beginning. He tells her that she is just as responsible for Daphne's death as Bramwell. Catherine cries. He tells her that he followed her to the gazebo last night, talking about their child. She says she knew something was wrong last night — he had changed. Morgan asks why she couldn't be honest with him. She says it was a moment of weakness that happened before they were married. He points out it was after they were engaged. She says she won't ask him to forgive her. He says he doesn't intend to. She asks what he has planned for her and Bramwell. He says has found one small way to gain satisfaction, and he hopes Bramwell rots in the room. Catherine begs him to set Bramwell free. She says if he does, she will never set eyes on him again. She gets on her knees and offers to do anything for him. He asks if her love for Bramwell is that great, he'll let him out. He says they'll go to the room together and unlock the door. 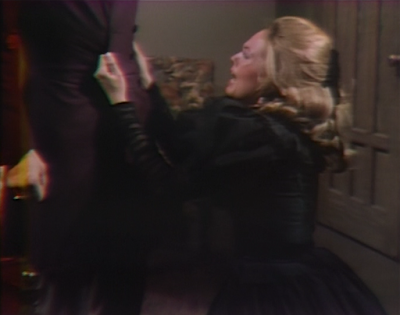 At 8pm, Kendrick says there are only ten hours to wait. He asks why they don't just break down the door. Julia explains that someone has to spend the night. If they remove Bramwell, it will just anger the ghost of Brutus. Kendrick goes upstairs to see Melanie.

Morgan and Catherine go to the locked room. He gets the key. She thanks him, and he tells her not to. She says he won't regret it, and he replies that he's sure he won't. He opens the door, pushes her in, and locks it behind her. He says that she and Bramwell are together now, and he hopes that they rot together like James Forsythe and Amanda did. 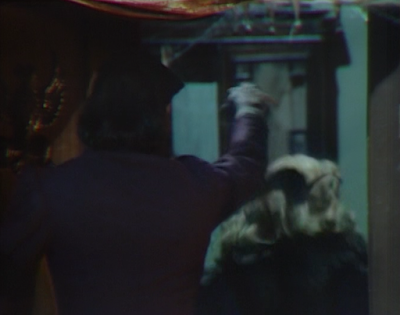 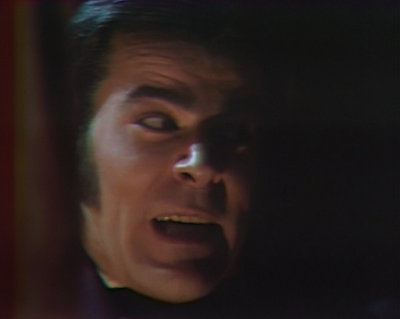 John: I wonder who fake-Amanda and fake-Forsythe were in the secret room? It clearly wasn't Nancy Barrett and Keith Prentice. For a minute I thought today's cliffhanger finale was going to be Bramwell about to touch the corpse of Forsythe (all the while knowing that tomorrow Julia would have interrupted him just in time  — because it's not like they have another few weeks to let Jonathan Frid go wild for another round of 'look who's possessed by Forsythe!').
Christine: I wonder if they used the David and Hallie mannequins from Episode 1096 to stand in for Forsythe and Amanda. So, if Bramwell touched Amanda's corpse would he be possessed by Amanda? Isn't she already possessing Melanie? And she didn't touch her.
John: Julia's clearly sharp enough to figure out that Catherine is having Bramwell's baby. Poor Kendrick, being the new kid on the block, didn't get the subtlety of the announcement.
Christine: It didn't seem subtle, though it may suggest that Kendrick is far more naive than anyone could have guessed.
John: I can't imagine any viewer who didn't see Morgan's surprise for Catherine coming... but I do have to point out that when he said that he hopes that Catherine and Bramwell rot like James and Amanda did, he must have forgotten that rotting is the one thing that they didn't do! In any case, it will be interesting to see if anyone comes to their rescue, or if they end up spending the night together in the locked room. Perhaps their love will be the magic that breaks the curse. Excuse me while I go vomit.
Christine: It seemed clear to me that Brutus had no intention of relieving the family of the curse, and their stay in the room seems rather futile in achieving that outcome. You may want to keep the barf bag handy, though it seems unlikely that Bramwell's illicit love affair with Catherine will be what quells Brutus' vengeful spirit. Forsythe and Amanda's love affair may come into play somehow.

Wow! I remember when these episodes aired! I couldn't get home from school in time, so my Mom audiotaped the episodes! Wish I still had the tapes!