A caped figure wanders through the Eagle Hill Cemetery. It enters the mausoleum, and goes into the secret room. Angelique is shocked to find Barnabas' coffin is gone, and says that he will never get away from her. She calls to someone named Laszlo. He comes inside and is not impressed by an empty tomb. He says they come every year, and there's nothing there to see. He asks what's different, as she normally walks out happy. She tells him she never answers his questions, and yet he keeps asking them. She tells him that there is an estate in town called Collinwood. He's to get it using his gypsy ingenuity to find out everything he can about Barnabas Collins. She's not sure if they will know him. He asks who Barnabas is, and she says he's the only man she ever loved. He adds, except him, of course, and she repeats it. She tells him he cannot bring up Barnabas' name first. She sends him on his way. 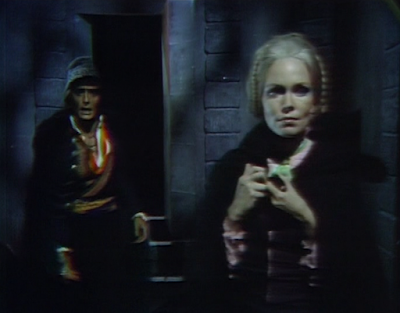 Barnabas stops by to see Leticia. As they're talking, she stops and says he seems like a man who has been there a long, long time. He says Quentin and Desmond said that she knows about something, and she says she doesn't know anything about the head, and asks why they sent him. He tells her that it's important that they find... and she interrupts him. He tells her that the children's governess was killed on the way to Rose Cottage. He asks her if she knows where the head is. She says the head is evil, and if none of them ever see it again, it will be for the best. He says he hopes for her sake that she doesn't know where the body is. He leaves, and she opens a cupboard where she has the head in a box stashed. 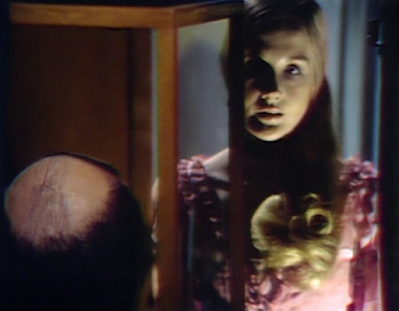 Gabriel tells the gypsy that there's not a lot of need to tell the future. He says he needs to know about the present, and asks if he can see a headless man. Laszlo says the house is against itself. Gabriel asks for details, and Laszlo says for a modest fee... Gabriel cuts him off and says he can put him back out in the storm. He tells Laszlo to read his palm, and he does. Barnabas walks in, and Gabriel tells Laszlo he can read Barnabas' palm next. Laszlo gets up to leave. Barnabas tells him to be careful if he's going into the village, as there are strange things happening tonight. Laszlo says he knows far better than Barnabas. 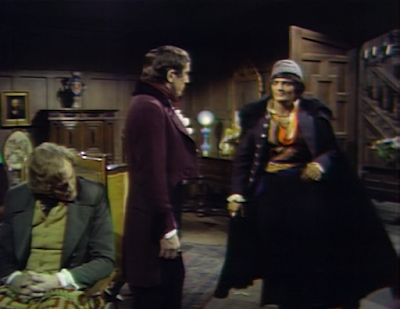 Leticia speaks to the head, and calls out to the body of Judah Zachery, telling it to show her where it is. She sees a vision of the body covered in leaves. She turns to the head and says she knows what she must do now. 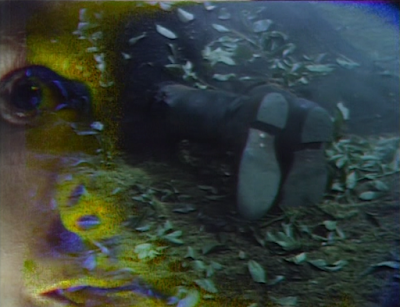 Gabriel asks Barnabas why he didn't let the gypsy read his palm. Barnabas suggests that it's odd for a gypsy to have wandered onto the estate. Gabriel asks how Barnabas' search for the headless man is coning. He says he's going to join the search before he can kill someone else.

Leticia finds the headless body in the woods. She brushes away the leaves, an the body grabs her. She calls it by name and says she was sent to find it. It seems tentative, but lets her help it. It takes her hand and she leads it away. 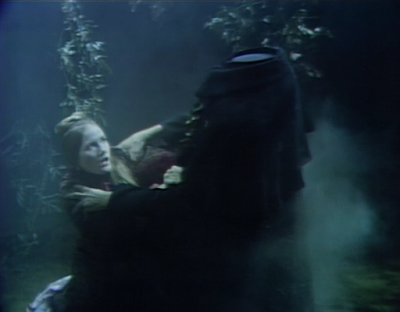 Angelique is waiting in the mausoleum when she hears a whistle. Laszlo enters and tells her he learned nothing' no one was home. He then adds that he was introduced to Barnabas. She asks him to tell her if he still has a strange look in his eyes — and when he smiles does his face go gentle? Laszlo says he didn't smile at him. He adds that he recently arrived from London. She says, "So that's his story." Laszlo asks if he came from this room, and she says that's none of his concern. He says she'll tell him, or he'll find out for himself. 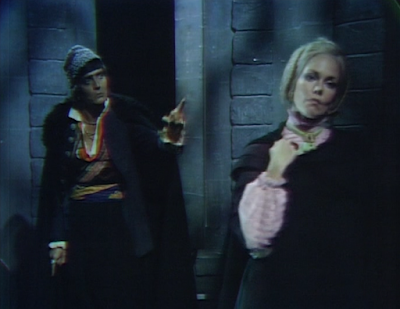 Leticia leads the headless body back to the coffin where he was buried. She tells him that he'll be safe. She steps away from him and he panics, swinging his arms around. She helps him into a chair, and tells him to stay. 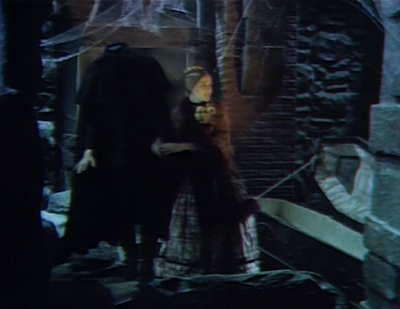 Angelique arrives at Collinwood, and introduces herself to Gabriel as Mrs. Barnabas Collins. She says she wanted to surprise him. Gabriel says it surprised him, and introduces himself as a cousin. She explains her trunk was stolen off of the stage from Boston, and asks when her husband will be  back. Gabriel says he is staying at the old house. He offers her a brandy and she accepts. He asks if she's from England, too. She says she is, and that she can't wait to see the expression on his face when he arrives. He adds that Julia, Barnabas' sister, might still be up, and offers to go get her. She acts like she knows of her, and says that she's never met her. She tells him to see if she's still up. 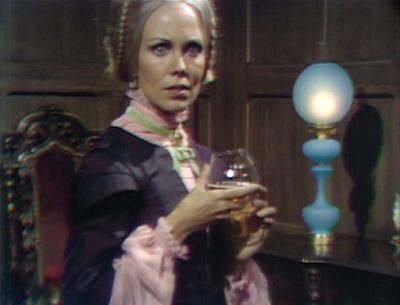 Leticia returns to Rose Cottage, and covers the box with the head in the cupboard.

Gabriel says Julia must be at the old house. She says that Julia was upset when she arrived and Barnabas wasn't there yet. She asks if Gabriel minds if she waits. She says it's almost like the end of a dream — being reunited with Barnabas and finally meeting Julia. 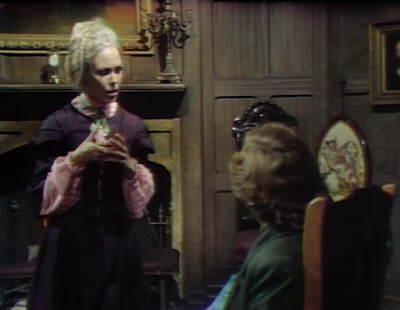 Leticia brings the box with the head to the secret grave, and tells the body he can now be whole again. The headless body approaches the boxed head... 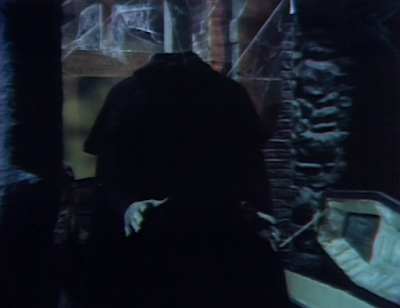 John: Angelique is back, and has brought Aristede with her! Well, Laszlo, anyway. For what it's worth, he's another familiar face for the 1840 flashback, and a welcome one at that! I wonder what the gypsy will make of the warlock with a detached head! And I can't wait for Julia and Angelique to meet up, since Julia will definitely recognize her... 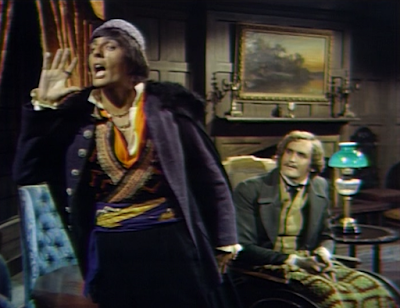 Christine: If Laszlo is anything like his predecessors, he will be seeking to get the Head for himself to reap the benefits of its power. I don't know if I hope for Julia to meet up with Angelique first or Barnabas, or maybe both at the same time! Any way it plays out, the Angelique reunion should be fun to watch!
John: I called it — though it's not like it took Leticia's second sight to figure out that she had taken the head. And poor Barnabas seems to have forgotten whether he's looking for the head, the body or both!
Christine: I had assumed she had taken it to get rid of the evil thing rather than help reunite the parts. I wonder if she'll be tasked with sewing it back together or if it will magically meld itself.

John: So explain to me how a headless body that can't see appears to have perfect hearing (without ears)? Do you think once his head is screwed on, Zachery will be Leticia's boyfriend? She seems to have really hit it off (with his body, anyway)...

Christine: Why would you question how a headless body can hear and not how it can walk or move around without a brain? Clearly supernatural beings on this show are imbued with the power to do anything the writers construct for them. It's certainly not out of the realm of possibility that Leticia will introduce the reconstructed Judah to the family as her new beau. I'm hoping for some excitement this week! 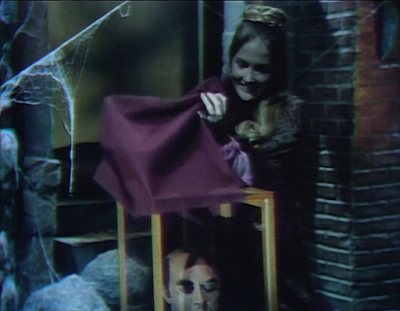