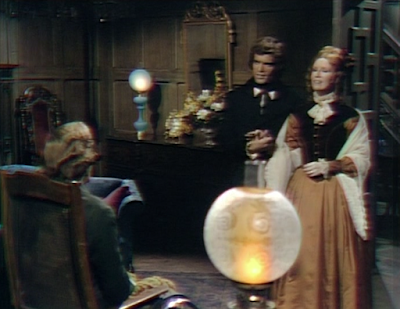 She asks if Gerard told him. He says he was just about to. He explains that the two were married that afternoon. Gabriel is speechless. He then tells Samantha what a surprise it is. She says she doesn't expect him to understand, and he assures her that he does understand everything. He congratulates her, saying she and Gerard couldn't have done him a better favor than she has. She asks what he means, and he says she has more to worry about than what he means — much more. 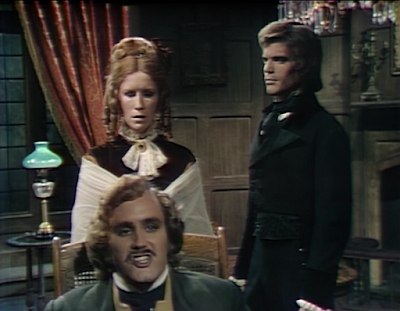 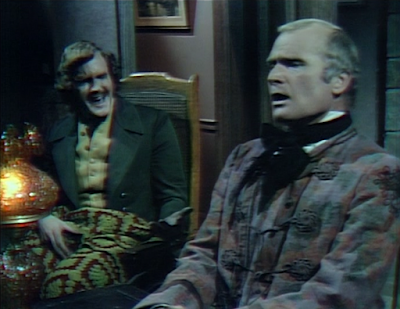 Samantha asks Gerard if Flora will be pleased.

Desmond reads a note that Ben had killed himself. He wonders why Ben would try to cut off his own head. He looks to the head in the glass box, and decides there's no connection. Desmond picks up a knocked down chair and finds the book Ben was reading. Inside it he finds a letter. It's to Desmond, and says he should read the book to know why the head should be destroyed. 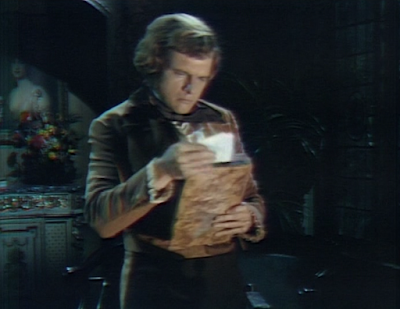 He starts to read, and doesn't notice the head's eyes have opened and are watching him. He looks up, and the head's eyes are closed. He gets up and walks to it. He examines it closely. He goes back to the table and throws Ben's letter into the fireplace. He walks out of the room, not noticing the head's eyes are open once again. 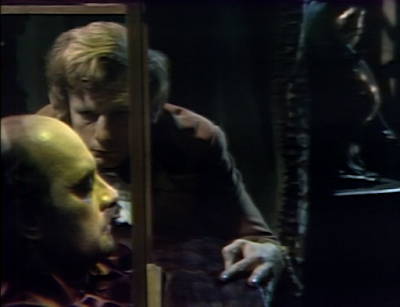 Gabriel tells Samantha she doesn't know the truth about her husband. She says she has no intention of listening to him, and walks out on him, laughing as he tells her he has a whole report on him. Gabriel walks in and tells Gabriel his wife is a loyal woman. Gabriel says he knows he was scheming with his father. Gerard says he went along with his plan to save Samantha's life. Gabriel tries to wheel his way out, and Gerard suggests that if he is a good boy, Samantha and he might be charitable to him. He wheels into the foyer when Desmond enters. He says he needs his help. He tells Desmond there's been a marriage, and they must do something about it. 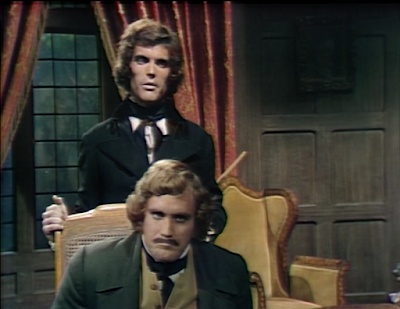 Desmond goes into the drawing room and congratulates Gerard. He asks about the storm that took Quentin and Tad overboard. He asks where Gerard was on the ship when it happened. He accuses him of returning to break the house apart. Gerard says Quentin would not want Samantha mourning forever. Gerard storms out. Gabriel comes in and tells him to go to the bank to get his safe deposit box. Desmond asks what's in it, and Gabriel says that everyone in the house will see. 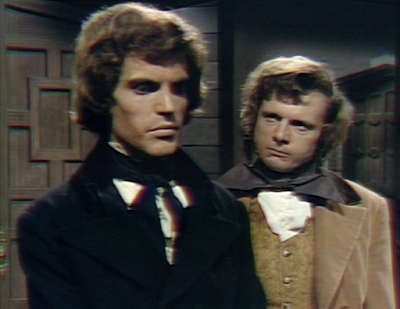 Gerard goes to see Daniel. Daniel says he remembers his wedding night, and that it turned out badly. He tells Gerard that she's dead, but her ghost appears sometimes. He says he saw her in the playroom last. He says others think he's mad. Gerard says he's not, and invites him downstairs to join them in a toast. Daniel is touched by the gesture. He says Gerard reminds him of Quentin, and he accepts his offer. 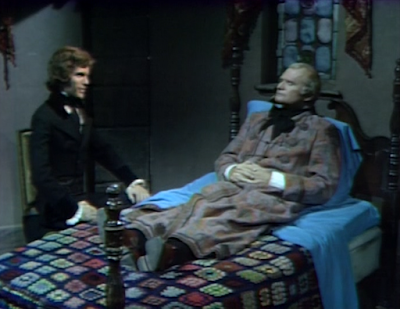 Samantha comes downstairs and finds Gabriel waiting in the foyer. He says he's waiting for his wedding present for her to arrive. She tells him there's no need for any present. He tells her that he hired Gerard to kill her, and he agreed to do it. She tells him he's as mad as his father. Gabriel says she's not thinking of Tad tonight. Daniel comes downstairs with Gerard. Gabriel is surprised to see his father, and tells Gerard he doesn't know what risk he's taking. Daniel tells him he's like his mother, and if it was up to him he'd be locked away. 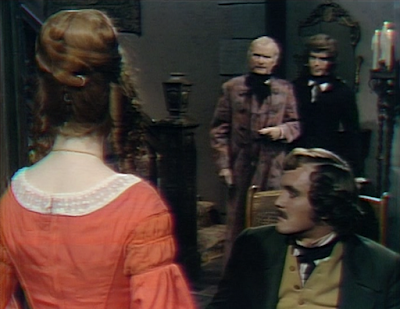 Desmond returns, and Gabriel says his wedding present has arrived. Desmond offers his best wishes to Samantha, and gives Gabriel the package. He opens it up, telling Gerard that he can still leave, before he opens the box that will incriminate him. He opens the box and it's empty. Daniel says he's just like his mother — he'll spoil anything, and Desmond leads him back upstairs. 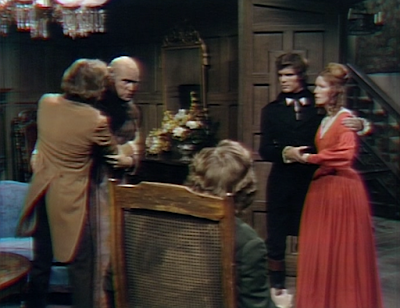 Gabriel wheels out, and Samantha suggests he's mad. She then asks Gerard why he spent so much time with her father yesterday. He asks if she thinks his father gave her the contents of the box? She says no. He tells her they have a brand new life ahead of them, and the past is dead and gone forever. They kiss, and he says he wishes they could leave Collinwood. She says that when she's with him, she doesn't even think of Quentin. They open the door to the foyer and Quentin walks in, telling her that he's home. 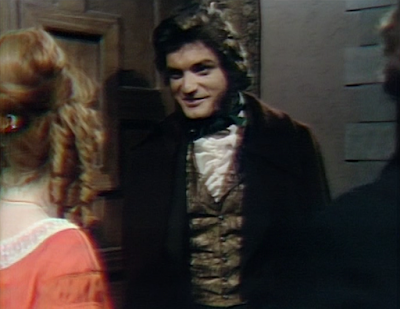 John: Surprise — Quentin's back! Well, not so much of a surprise that he's back, but I was surprised that he was back so soon. Particularly after how things dragged on in the destruction of Collinwood arc, it's a welcome change for the writers to get right to the point!

Christine: Judging by his entrance, I'm guessing he will be surprised to find out he's dead.

John: So the day you bring a boxed severed head to Collinwood, a long-time staff member tries to cut off their own head, and you're sure it's just a coincidence? I guess Desmond may not be the sharpest tool in the Collins family shed... 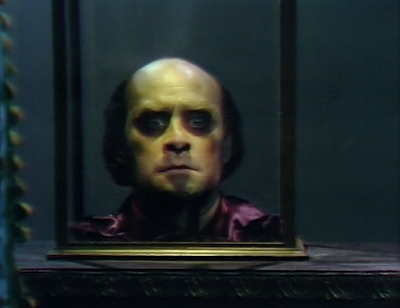 Christine: I would tend to believe that Desmond is telling himself it's a coincidence, not because he truly believes it to be true, but because he can't face the fact that his thoughtful gift for Quentin may have caused Ben's gruesome death.
John: The more Daniel talks about his wife and his miserable marriage, I wonder if we're going to meet the late Lady Collins. And if we do, will she be portrayed by Grayson Hall? Or will his initial meeting of her in the halls of the West Wing, and mistaking her as his wife's ghost, just the ravings of a madman?

Christine: Gabriel was certainly doing a lot of awkward ball squeezing today. The way the camera zooms in on it suggests there is some significance to this compulsive behavior, but since we don't know what that is, the close ups just seem rather odd. 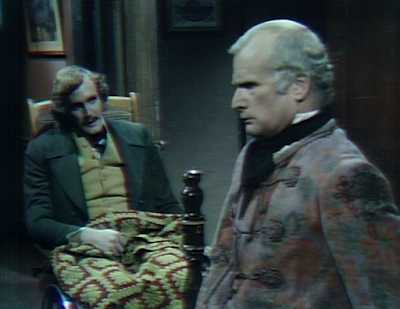 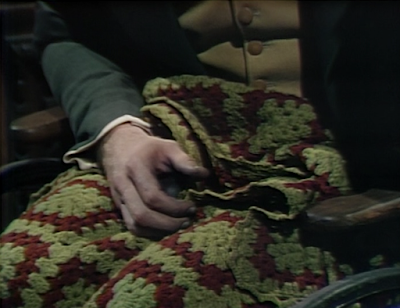