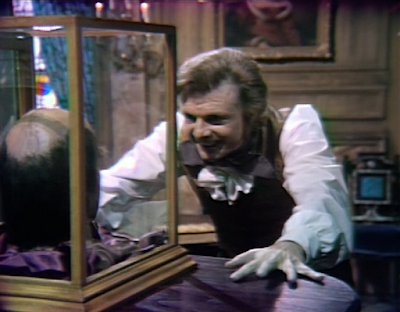 Desmond closes a window banging in the wind in Rose Cottage. He goes to the head in the box and stares at it. He asks if the legends can be true. He sits down and falls asleep, dreaming. He hears a voice tell him that he will help him.  Desmond snaps awake. He goes to the head and asks if it's the voice it heard. Desmond asks it what powers it has. 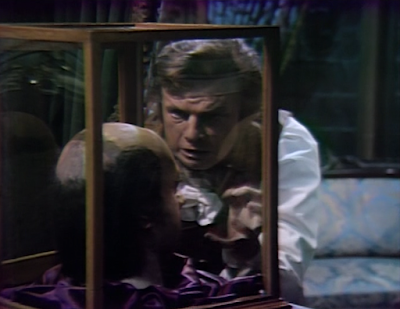 Flora comes in and asks him who he was talking to. She asks if he was talking to the head, and he tells her he was just having a little fun. She tells him to get rid of it. She says he's hardly spent any time at Collinwood since Quentin returned, and that they used to be inseparable. He says he doesn't want to get involved in Quentin and Samantha's problems. She says they were best friends, and he replies in an angry voice that an outcast has no friends. She asks him to come with her to Collinwood, as she's going to reunite Quentin and his father. Desmond growls that he kept telling them that death was an extension of life. She says he's not being himself. He tells her that he met a pretty young lady, but the next day she disappeared. 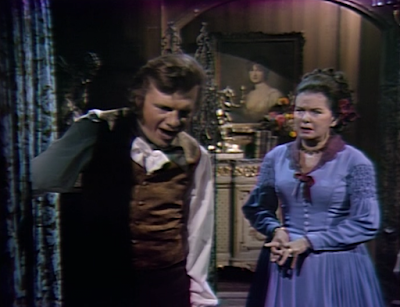 Daphne realizes that she should have used Desmond Collins, rather than lying to him. She wonders how she can meet him again.

Quentin asks Desmond what he thinks is taking his mother so long with Daniel. Desmond says it's probably just his mother holding things up; being so sentimental about reunions. 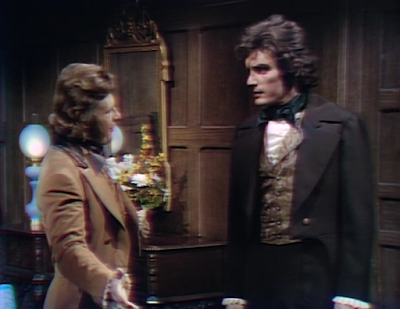 Flora escorts Daniel downstairs and into the drawing room, where Quentin is waiting. His father embraces him. He says it's good to be back home. Daniel asks about Tad, and Quentin says he's in Boston, and Samantha went to get him. Daniel asks if he was told about Samantha and Gerard. Quentin explains that she has to choose between he and Gerard. Daniel is angry, saying he should tell Samantha what to do. Quentin tells his father that he's moving out of the tower room and back into his own room. Quentin and Flora head upstairs to make the arrangements, and Daniel tells Desmond that he's noticed a change in him since Ben's funeral. 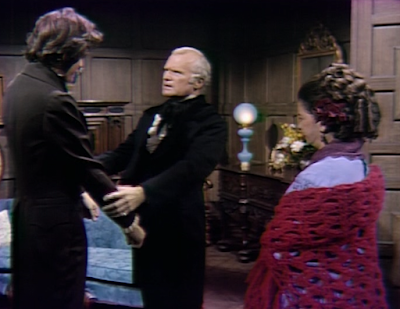 Desmond says he's just thinking about how Ben died. Daniel says the police are fools to believe Ben tried to decapitate himself. He says Ben never tried to take his own life. He points out that Ben's death was very similar to the Bedford atrocities. He adds that on the day he died, Ben had mentioned the mysterious decapitated, disembodied head that played such a prominent part in the Bedford affair. Desmond asks him to tell him more, and Daniel says it was the Fall of 1803, when he just turned 20. Each murder victim was found decapitated, all in a short period of time. He says the newspapers were full of the lurid details. 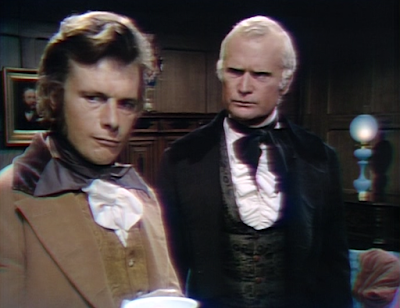 Desmond goes to the offices of the Collinsport Star, but finds the door locked. He knocks, and is shocked when Daphne answers the door.  She greets him, and he says he didn't expect to see her. She says she took a job there, and asks what bring him there. He explains he needs to see back issues of the newspaper. He tells her he's looking for October of 1803, and she pulls them right out of a drawer. 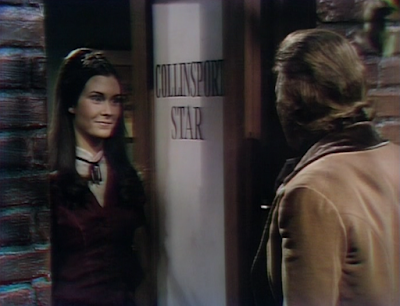 He flips through them and sees a reference to a fourth Bedford victim, and then the strange case of a pagan head. He reads about a Mr. Green who was imprisoned for dealing with the Devil's son, and the adoration of a pagan head. Desmond asks to borrow the papers for a few days, and Daphne says he just has to sign for them. She asks him if there's some kind of joke, and when he asks what she means, she points out that he signed the receipt Judus Zachary. Desmond explains that he sometimes writes using a pen name, and signs the receipt again. He tells her that he'd like to see her again, and invites her to join them for dinner at Collinwood. She tells him she'd be delighted to join them. 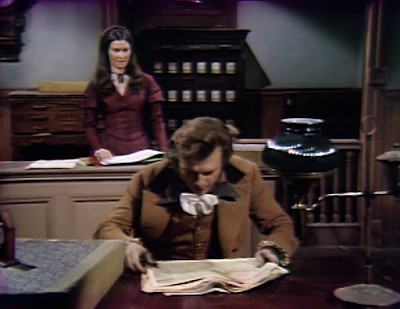 Daniel tells Desmond he made a mistake not taking his advice. He says he should have forgotten about the Bedford atrocity. Desmond asks him if the name Otis Greene means anything to him. Daniels says Greene confessed to all four murders, explaining that he was forced to commit the crimes by a mysterious disembodied head that controlled him. Desmond asks what became of the head, and Daniel says the authorities never found it. He says Greene claimed a young handyman who worked for him ran off with it, though he denied it. A year later, the handyman was killed, his throat cut like Ben Stokes. He says Greene was committed to an asylum, and was released ten years ago. Desmond asks where he lives, and Daniel says he lives on a farm not far from the village. 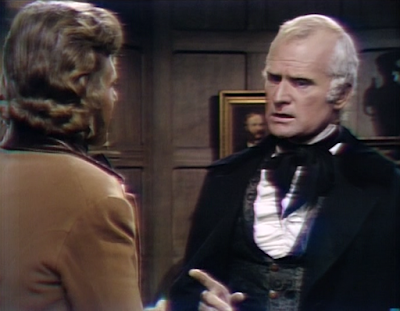 Desmond tells the head that Otis Greene will visit him tomorrow and tell him everything he wants to know. 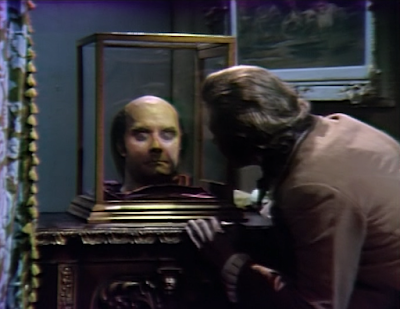 Flora tells Daphne that hers is one of her favorite names. Flora says she's going to write a book about what happened to Quentin, when he comes in and says his life will not be the subject of anyone's book. Flora introduces him to Daphne. She then leads them into the dining room. 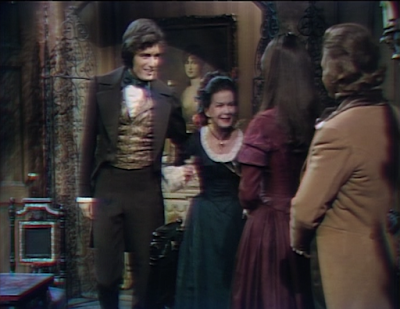 After dinner, Flora tells the group that Gerard's psychic powers are amazing. She says he taught her to read palms and Tarot cards. She deals out the Tarot cards to do a reading for Quentin. She's unhappy with the results, and when she flips out the middle card, it's death. She says that someone he loves has died. She asks if anyone he knows has died recently. He says no one close to him has died recently. Daphne asks Desmond to take her home. Flora invites her back, and she says goodnight to Quentin. After Desmond and Daphne leave, Flora asks Quentin if he's concerned with what she read in the cards. He says that she may not have learned as much as she thought she had, and after he's gone, she realizes that the thought had never occurred to her. 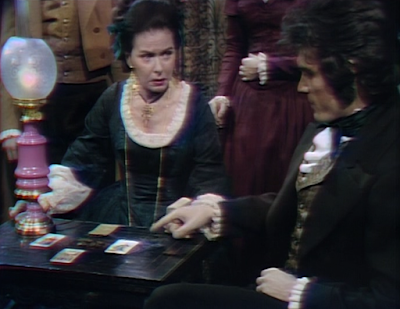 Quentin crumbles a note and says it can't be.

Daphne writes in a journal that she has finally met the man she is going to kill. 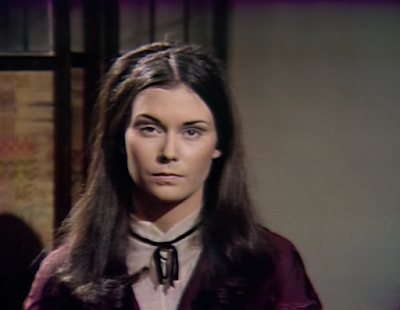 John: Is that how you treat 37 year old file copies of newspapers? I don't know who's more to blame — Desmond, or the new hire at the newspaper, Daphne, who doesn't seem the least bit concerned when he all but wads the stack of brittle newspapers up. 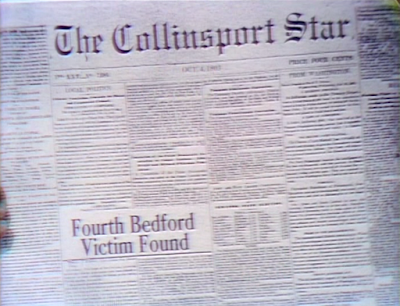 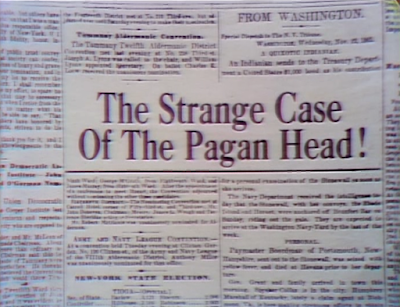 Christine: It's been quite a while since we've been treated to the headline grabbing headlines of the Collinsport Star. I especially like "The Strange Case of the Pagan Head!" That would have made a great Perry Mason mystery! I'm only surprised it's lacking the sub headline 'Police Baffled'. Here are some other notable past issues that will be archived in the future: 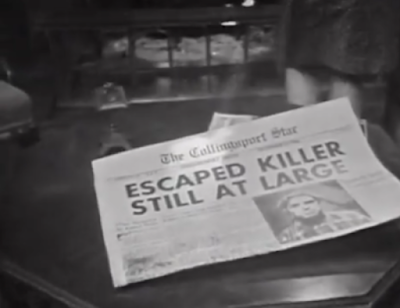 Episode 116
John: Have you identified the portrait in Rose Cottage? Is it anyone we've seen before?
Christine: When I set out to collect portraits, my intention was to collect the ones that were directly referred to or were notable for having many appearances. Unfortunately, this means that I may have left out some of the portraits such as this one, that I had not predicted may have gained some significance. I believe this portrait is unique to this time period, though I can't be certain until I conduct a thorough investigation. Maybe on my third viewing of the show I'll get around to adding all the random portraits to the collection. 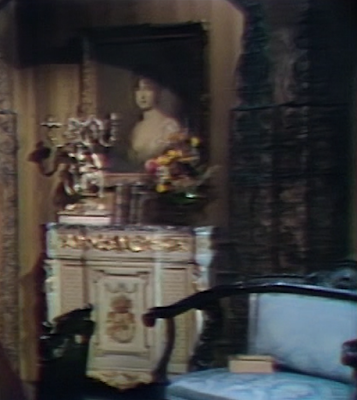 John: Let's see, does Quentin know anyone who has died recently? Anyone close? I guess that means Ben  Stokes doesn't qualify as close, considering he just about decapitated himself a few days ago. Not the kind of thing that you would think Quentin would have forgotten so quickly. 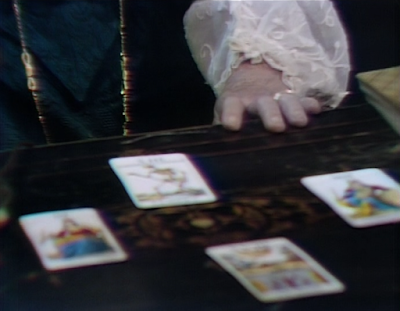 Christine: Flora's reading indicated that someone he loved had died, which we can assume he was informed about in the note he received. Who do you suppose has died? I'm guessing it was Samantha. It was interesting that dear old Daniel, who has been sequestered in the Tower Room, has suddenly become a fount of knowledge, somehow knowing detailed history, along with the current whereabouts of Otis Greene, despite having been isolated for quite some time. 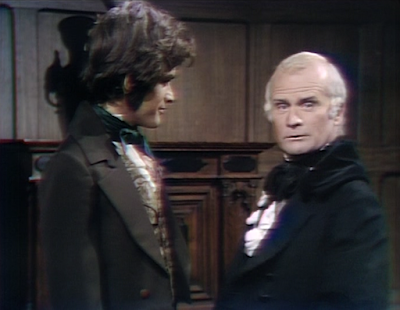 I'm really enjoying the 1840 story line so far. I was 4 years-old when this originally aired and I remember watching every day with my mom. That head gave me nightmares for several months! It was also where I started my lifelong crush on Kate Jackson. When Charlie's Angels started, all the neighborhood kids were gaga for Farrah, but I was decidedly in the Kate Jackson camp. It must have been from her work on Dark Shadows as I never got to watch The Rookies as a kid. Along with my love of KLS, I may just have a thing for actresses with slight overbites?!?