Yaeger finds himself in a room that he realizes must be part of the old house on the Collins' estate. He sees a coffin, chained shut. He wonders what deep dark secret Will Loomis is keeping from the rest of the world. Thinking the answer might come in handy, he unchains the coffin. 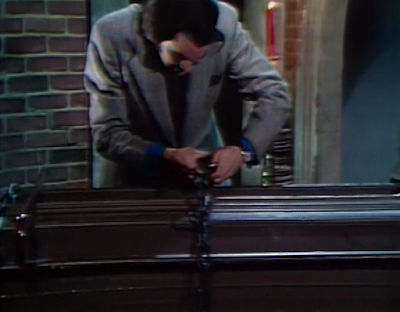 Upstairs, Carolyn tries the locked door to the basement. Will asks her if she's still trying to rescue Barnabas, and then points out that at least he has an excuse for keeping a vampire around—getting a book out of him. She tells Will there's someone down there. He agrees, telling her there's a vampire. He says that after he interviews him, he'll interview her—the vampire's victim. She tells him that he's gotten out. She says it might have been Fred the handyman. She hears the chains downstairs, and says he's got to do something. 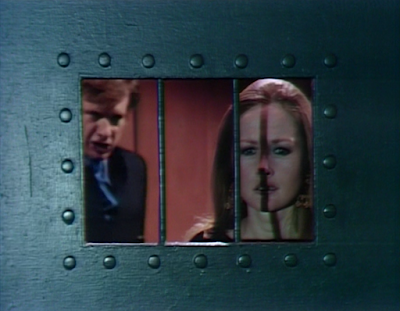 Yaeger removes all the chains, but before he can open the coffin, Will sneaks up behind him and knocks him out with a gun. Carolyn comes downstairs and asks who the main is. She then adds that he knows. Will says he knows they have a chained coffin in the basement. She asks if he got the coffin open, and he says that he didn't. He drags Yaeger away, saying he won't let a stranger ruin his book. 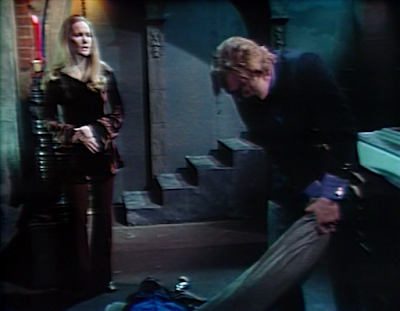 Buffie looks for John in the cave entrance. She wonders why he's hiding, and why he had her steal from Cyrus. 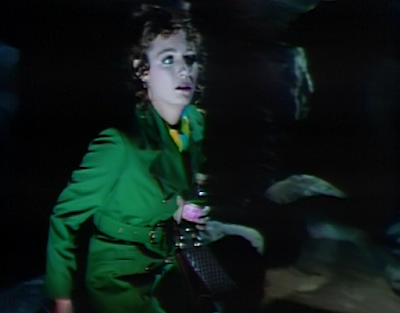 Yaeger comes to on a couch. He recognizes Carolyn, but she doesn't know who he is. She keeps a gun trained on him and calls Will. Yaeger asks where her husband is, and why he makes her do a man's work. She asks what he's doing in their house. He tells her he's interested in secrets, and she has a very interesting one. He asks about the chained coffin in the basement. She says she doesn't know what he's talking about. He asks who's in the coffin. He gets up, and she tells him to stay back. She calls for Will. He knocks the gun out of her hand and she screams. He runs out. 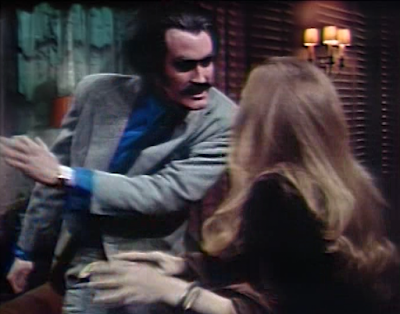 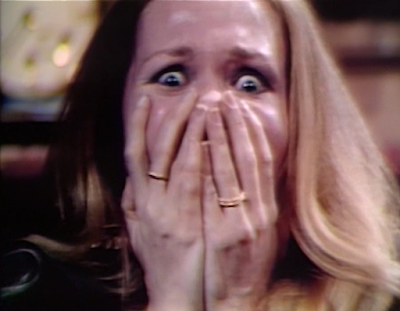 She goes to get the gun as Will returns. She tells him to go after the man, before he goes to the police. She says he knew her name. Will explains he had to fix the secret entrance so that no one else can get in. Carolyn says the only thing they can do is let Barnabas go. Will says his book is going to be big, and he'll be respected. He laughs that no one will believe it's all true. She tells him the man that was there will know it's true. Will says they can hide Barnabas in the secret room, but then she can get to him whenever she wants to. She tells him that the man who was there was evil, and she knows he'll be back. 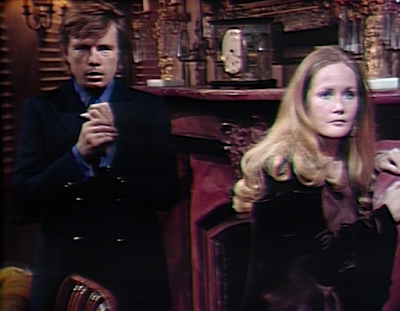 Buffie hears footsteps and Yaeger shows up. She gives him the potion, and she asks what it is. He says she doesn't have the right to ask questions. She reminds him that she stole it for him. She asks him why he didn't get it himself, and he tells her to go to town. He adds that if anybody asks, she hasn't seen him tonight. She asks why, and he says that he merely defended himself. He then tells her to leave, and she agrees to, but says she doesn't want to see him again. He assures her that she will. 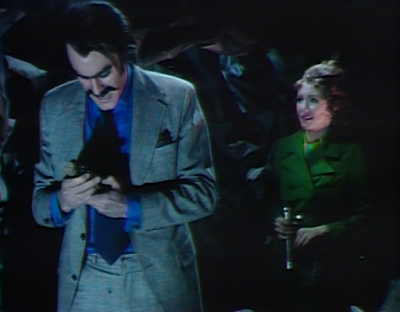 Will and Carolyn comes downstairs, and he tells her to do as he told her. He tells her that she just needs to hold out the cross to move Barnabas. He opens the coffin and tells Barnabas they have to move him. He warns him not to try to outwit them. Barnabas gets out of the coffin and asks them to put their crosses away. Will tells him to follow him, and that they are taking him to a safer place. They all go upstairs. 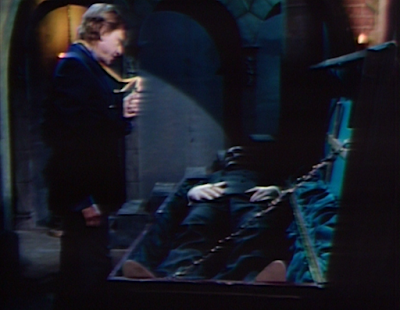 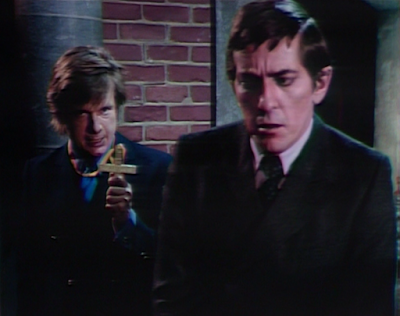 Yaeger debates drinking the potion. He decides to hide in Cyrus until it's safe for him to walk the streets again. He drinks the potion, and grimaces. 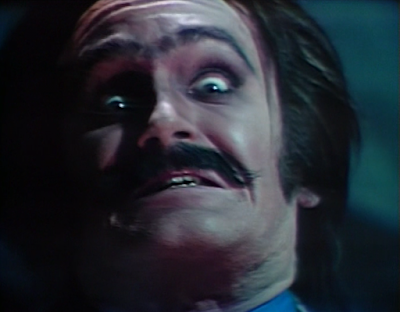 Will leads Barnabas into the secret room and tells him to sit down. Barnabas says he must have his coffin. Will assures him that he'll have it. Barnabas tells him that he has enough of his story for a book. He says he just wants to return to his own time. Will tells him he doesn't know how to go back. Barnabas begs Carolyn to help him, and Will says no one will stop him from doing what he wants with him. Barnabas says someone might, reminding him that someone unchained the coffin. He begs to be let go, and Will says there's no chance of that. 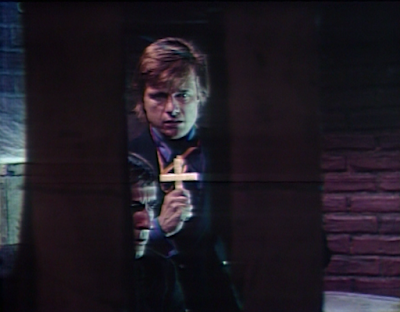 Larry arrives to see Cyrus in the lab, just as he enters through the door. He asks if he heard about Gladstone. He explains that he was run through with a sword. Cyrus screams angrily, and then says Gladstone was a fine chemist and a friend. Larry says he doesn't even know what Gladstone wanted to see him about. He adds that he thinks the killer was John Yaeger. Cyrus asks if he got a good enough look to identify him, and he says he didn't. Cyrus tells him that Yaeger wasn't even in Collinwood. Larry says that even if he's not blackmailing him, Cyrus needs to get rid of Yaeger. Cyrus agrees, and admits that he was wrong to encourage him. He says that John Yaeger will never walk the streets of Collinsport again. 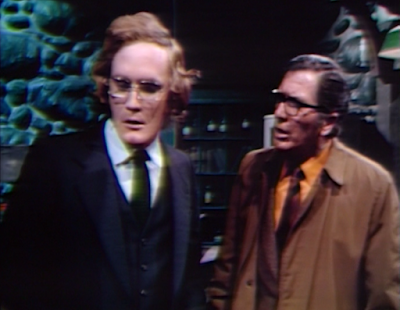 Will says they were last speaking of Josette DuPres. Barnabas waxes poetic about her. Will asks why he didn't make her a vampire. He says he hates admitting that he tried, but fate has always been cruel to him, and it was against him, just as it was the night Will found him. 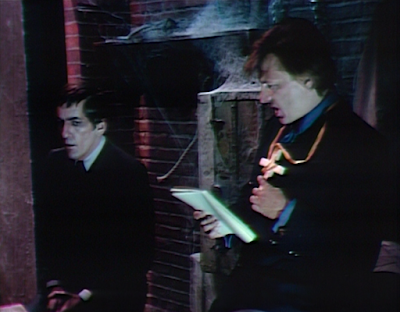 He sneaks up on Will and grabs his throat. Baring his fangs, he knocks Will down and tells him that he will no longer bow to fate. 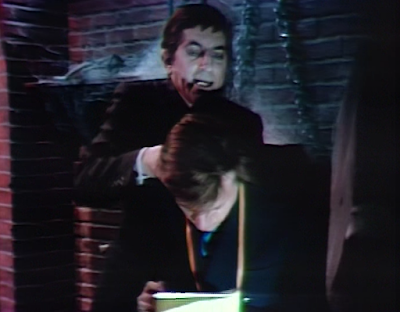 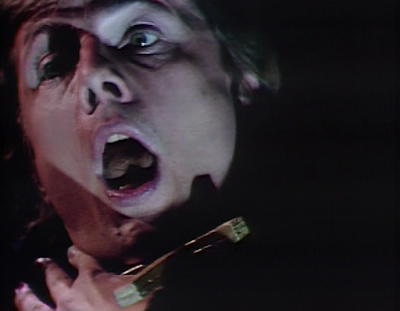 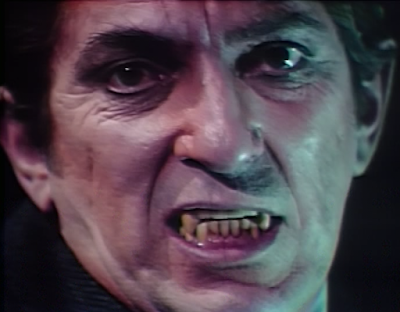 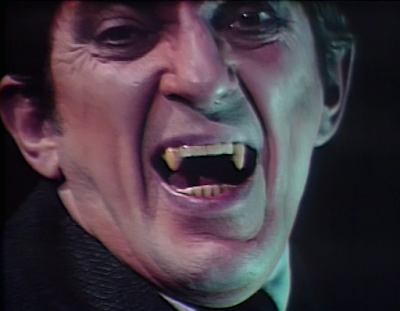 John: Do you think Yaeger is supposed to have super strength in addition to his super evil-ness, or did Will just not bother to lock the padlocks between sessions with Barnabas? Can't help but be disappointed that Yaeger wasn't on the receiving end of a coffin-opening throat grasp.

Christine: It certainly goes against tradition, but Barnabas got to satisfy himself with a choking by the end of the episode to make up for it. I don't think the padlocks on the coffin were ever locked, as you can see in several coffin shots that they were clearly not latched. Won't Barnabas feel dumb if he ever finds out!

John: Okay. We all understand why Barnabas has been a no-show for the last few dozen episodes, but to make it seem like Will has been letting him out of his coffin on a regular basis to record his oral autobiography is just plain wrong. Although I wouldn't be surprised to learn that similar dissatisfaction led a twenty-something Anne Rice to fill in the blanks and come up with her own vampire to interview...

Christine: Whether she did or not, we know that Dan Curtis had the idea first. I would be willing to bet that Will conducted all of his previous interviews through the coffin. The only reason Barnabas was let out for today's interview was because he had to move him, and hadn't yet moved the coffin.

John: Looks like someone gave John's wig a nice combing this morning! He was all neatly styled, with that fresh from the salon look. Sadly, by the end of the episode, he was back to being disheveled mess.

Christine: I think he sprouts a new mustache every time he transforms. I hope he gets a nice handlebar mustache the next time he drinks the Do Not Touch potion.

Second Down for the Count Ends:
After 28 episodes in captivity, Barnabas has finally been set free!