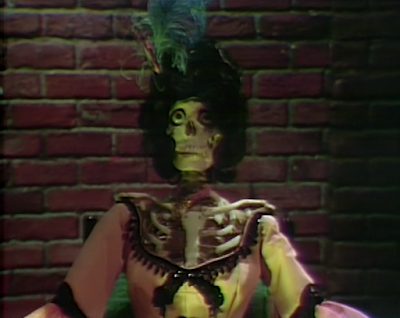 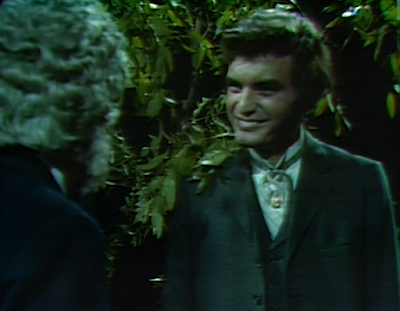 Angelique examines a new dress, and asks Petofi-Q if he likes it. He asks her if she's going on a trip, and she tells him that they are going on a trip together after they are married on Friday. He kisses her like he's never kissed her before. She's surprised. He tells her that he's decided that they deserve one another, and come Friday, she will get exactly what she deserves. The phone rings, and Angelique answers it. The call is for her. 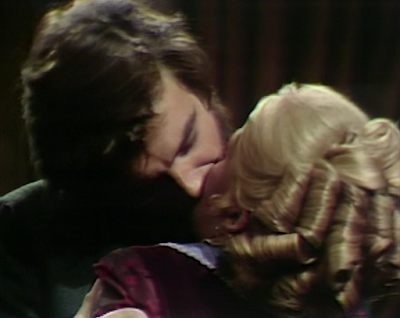 On the other end of the phone, Julia tells Angelique that she's been feeling strange all morning. She asks Angelique to come to see her immediately. 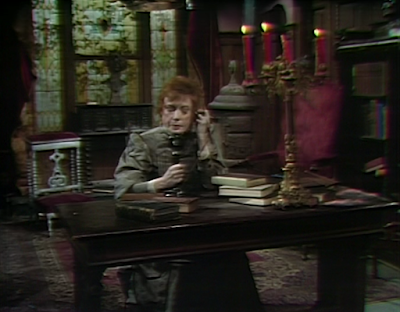 Petofi-Q asks Angelique if she has a secret admirer. She makes up a story and leaves him. 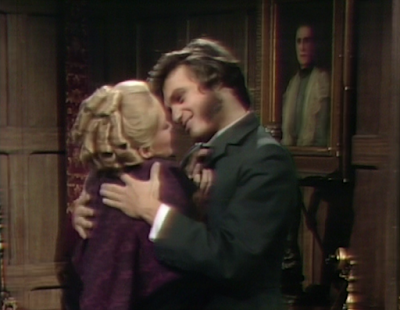 Beth is in her room when there's a knock on the door. She answers it and Count Quentin enters. He tells her he's Quentin. She's shocked. He tells her that she loves him, and she says she loves Quentin. He says that because she loves him, she must know who he is, despite his appearance. She tells him to leave. Count Quentin tells her to go to 'Quentin' and ask him why Jamison rejected him. He reminds her that Jamison rejected him when she tried to kill herself. He says she has helped him before, and he needs her help now. He begs her to ask 'Quentin' about Jamison. 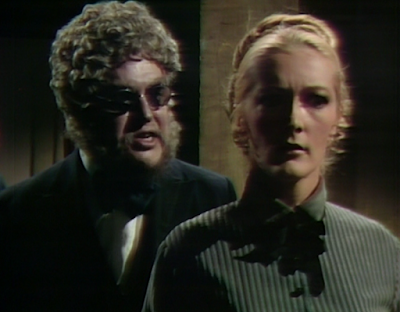 Julia hears a strange sound. Angelique enters, and Julia asks her if she hears the wind wailing. Angelique tells her that she doesn't hear anything at all. Julia says it's all part of everything else, and the way she came to the past. She says that since only her astral body traveled to the past, she can't die. She tells Angelique that she must be ready to fulfill their plan, no matter what happens to her. She sits down in pain. Angelique tells her that Barnabas traveled back, and didn't have similar issues. Julia reminds her that Barnabas had a body in the past and future. Julia hears the wind again. She hears a voice that she recognizes as Professor Stokes. 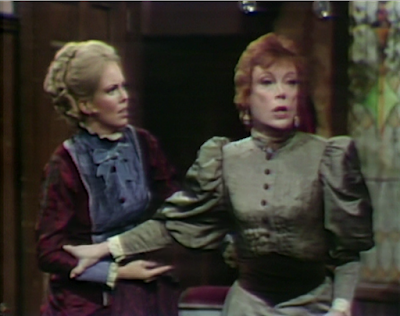 Beth comes to Collinwood to see Quentin. Petofi-Q enters and tells Beth that he would take care of everything, and things will be as they were between them. He asks if she believes him, and she says she does. 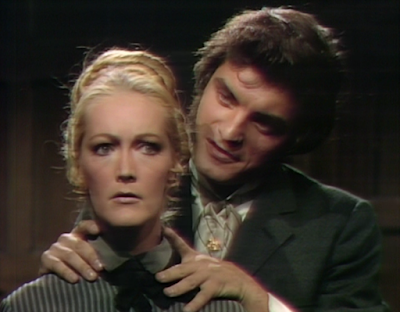 She brings up Jamison. He asks what about the boy. She says he's determined never to speak to him again, and he must feel terrible. He says he does. She asks what he had done to make Jamison so angry. Petofi-Q says it was something personal. She presses him, and he says he would rather not talk about it. He refuses. She says she wants to help him, and she thought talking about Jamison would help. He says she was wrong, and so was Count Petofi. He asks if he came to see her. He asks if he begged her to come and test him. She apologizes. He asks if they're both finally rid of Petofi, and she says yes. He tells her that he'll get rid of Angelique, and she won't have anything else to worry about, as long as she never doubts him again. 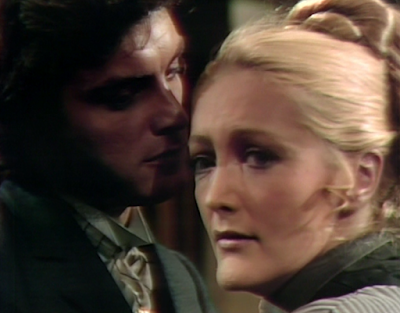 Julia hears the wind once more, and Stokes voice, talking to Roger. She calls their name, and she hears him refer to hearing her voice. She calls to them, and they hear her. He asks where she is, and she tells him she's in the past, frightened and alone. The communication is broken. Count Quentin comes in, and she says she doesn't have time for him. He implores her to hear him out. 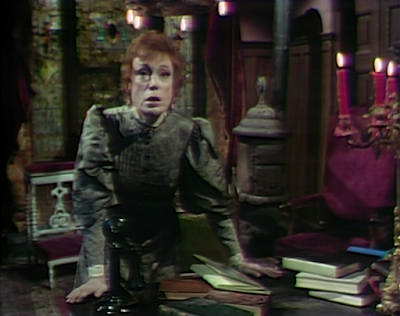 Angelique goes into the drawing room. Petofi-Q accuses her of going to the rectory. He asks what she was doing there. She tells him he'll be sorry if he follows her. He grabs her and tells her that he's giving her his name, and she's giving him her obedience. 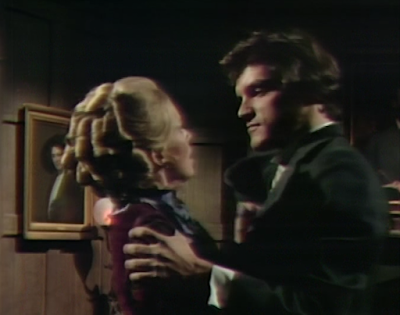 Count Quentin explains to Julia what's going on. He says she is the one person who can prove his story. She asks him what they spoke about when she came out of her trance. He mentions David, and how he wouldn't be a ghost in the future. He assures her that he's not trying to trick her. 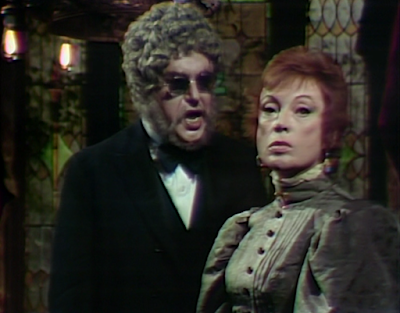 He hears a strange wind, and a voice. Julia is surprised. She says he couldn't have heard it. She says if he can hear the future, he must have a body in the future, too, and it must be Quentin's. She believes that he is Quentin. He realizes that she is in pain. She says she wants to help him, but she doesn't know how much time she has left. She says that someone is coming who can help him. He asks who, and as she starts to talk, she disappears. 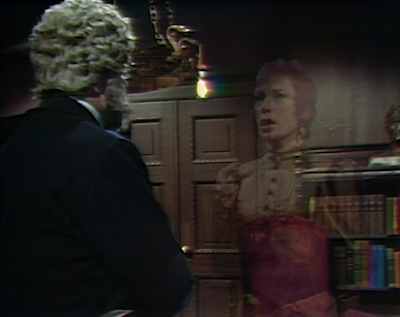 John: Beth has everything she needs to blow the lid on Petofi-Q's plot, and she doesn't press him for the answer that he doesn't have. Has she really given up so easily?

Christine: Either that or she got exactly what she was looking for and didn't need to press for more. I have to wonder why Petofi-Q and Aristede moved Wanda Paisley's skeleton from the drawing room in the cottage, and set her up with I Ching wands in front of a brick wall right before they had Count Quentin bury her, but it does make for a lovely photo. 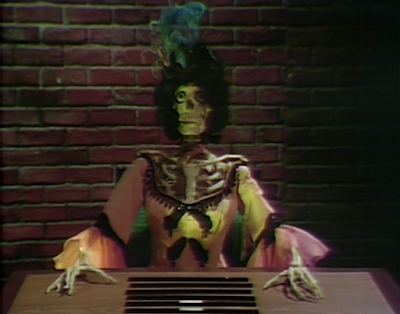 John: Interesting that we've got a new and improved way for cross-time communication—yell really loud. I thought for sure they'd require the ghost phone that Quentin used to speak to David in 1969.

Christine: How long will it take Angelique to figure out that her beloved Quentin is actually Petofi? The way her face looked after Petofi-Q mashed his face against hers says that she already knows, though I'd expect his insistence on her obedience to be the clincher. 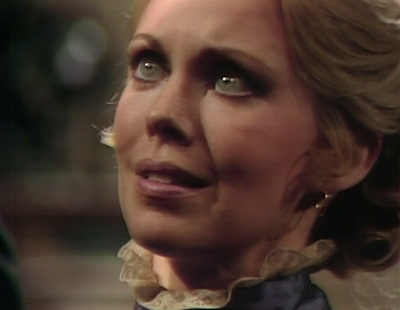 John: So do you think Julia was sucked back to the future? At least she should be able to continue her conversation with Count Quentin from there.


Down for the Count:
Barnabas was staked in his coffin 12 episodes ago.
Posted by John Scoleri at 6:00 AM