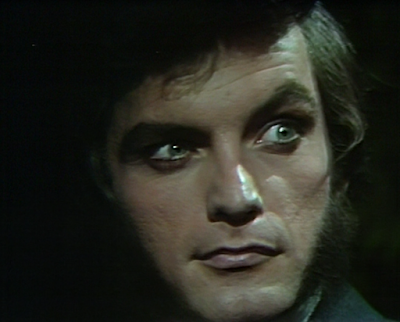 Petofi-Q and Aristede arrive at Collinwood. He tells Aristede he's narrowed down the hexagram needed to go into the future. He says he'll test them tonight, sending someone through the door into the darkness. Aristede asks who, and Petofi-Q says he'd make an excellent choice. Aristede is concerned about being sent through the wrong door. Petofi-Q says he's too useful to send, and tasks Aristede to find a subject. He tells him to meet him in the cottage with their new friend. 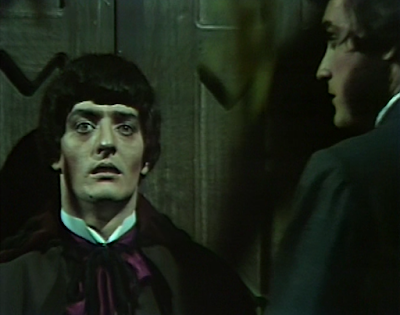 Petofi-Q enters Collinwood to hear Trask arguing with Edward. Trask tells him that his uninvited guest is costing the house money. Edward sees Quentin and invites him in, asking him to explain the tradition of hospitality of Collinwood to Trask. Trask brings up Amanda, and says he took Quentin's note to prevent her from seeing him. Petofi-Q asks Trask what he means. 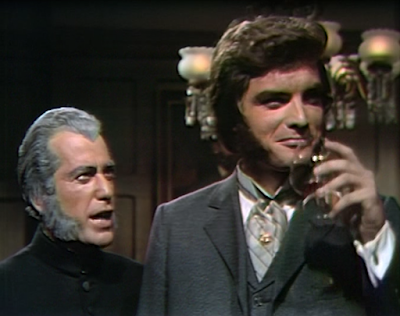 Trasks says Quentin seems different somehow. Petofi-Q assures him that he is the same. Trask says he was the only one who cared for Amanda, and suggests Quentin can only care for himself. He says he is the most callous, heartless womanizer he knows. He storms out, and Edward looks at Quentin strangely. Petofi-Q asks him what's the matter. Edward says there is something different about him. He asks Quentin what's wrong. 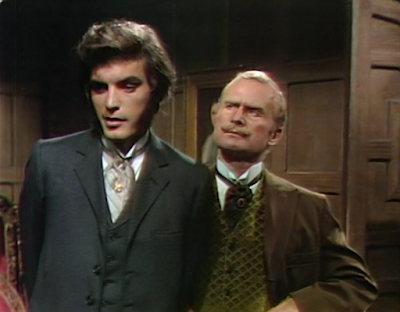 Count Quentin is in the cottage when Aristede arrives. Aristede tells him to get out. Count Quentin refuses, and threatens to kill Aristede. He asks where Petofi is. He says that Petofi will make a mistake and someone will figure out that he's not Quentin. 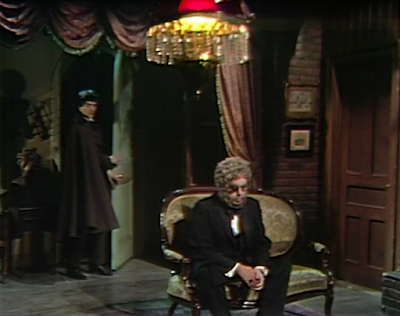 Petofi-Q tells Edward that Trask is insufferable. Edward says he may have found a way to deal with Trask. He says that he will marry Kitty. He points out that she is wealthy. Petofi-Q asks if the recent death of her husband would stand in his way. Edward says she's interested in him. He says that Trask's days of being master of Collinwood are coming to an end. 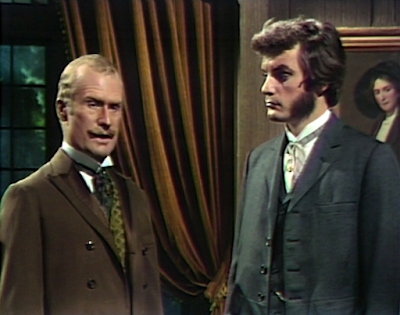 A lady of the evening drinks on the dock when Aristede comes up to her and offers her champagne. He invites her to join him for a night she'll never forget. 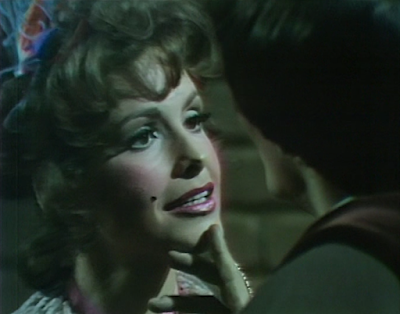 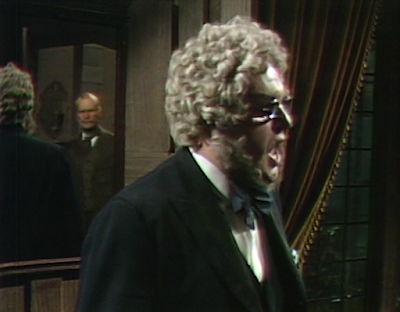 Aristede introduces Wanda Paisley to Quentin in the cottage. She sees the I Ching wands, and Petofi-Q tells her they're going to play a little game. He says that wonderful things will happen. He adds that she will be well paid for any and all services rendered. He sits her down at the table. 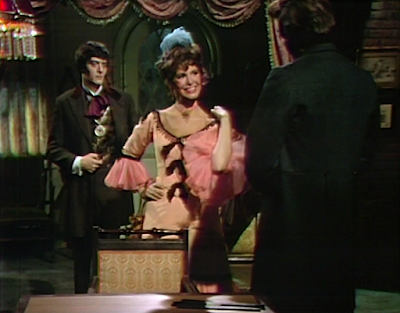 Edward says he's going to call a doctor. Count Quentin begs him not to. Edward suggests that he go home. Count Quentin pleads with Edward to help him. Edward sends him home. 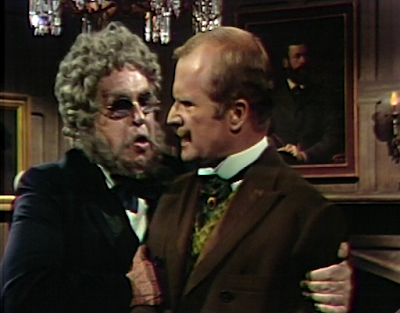 Petofi-Q explains that Wanda will go through a door in her mind. She isn't interested in playing along. She gets up to go, and Aristede stops her. Petofi-Q places his hand on her neck and sits her down. 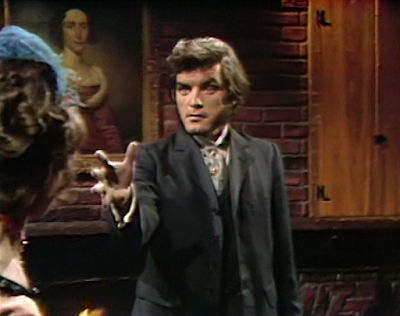 He tells her to throw the wands and she does. Once the hexagram is established, he tells her to concentrate. As she goes into a trance, there's a knock at the door. It's Count Quentin. He tries to stop them, but Aristede knocks him out. 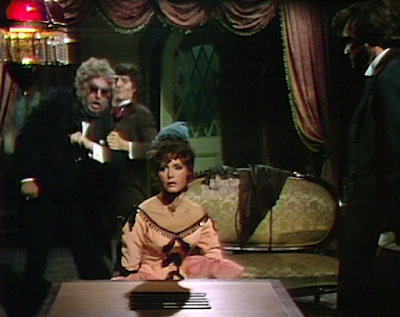 Petofi-Q tells Aristede to lock him up, but not hurt him. After they leave, Wanda stirs and says that she sees the door. It opens and Petofi-Q tells her to go through it. He demands that she tell him everything she sees. Two skeletal arms reach for her, and she sees the wide-eyed skull. She hears laughter and screams. 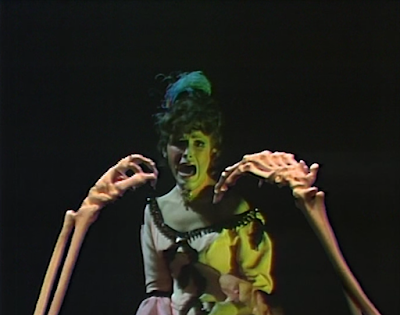 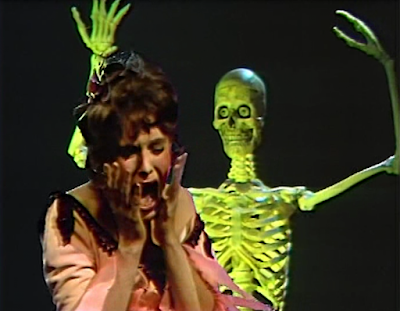 Petofi-Q and Aristede are shocked to see Wanda now a skeleton in a dress. 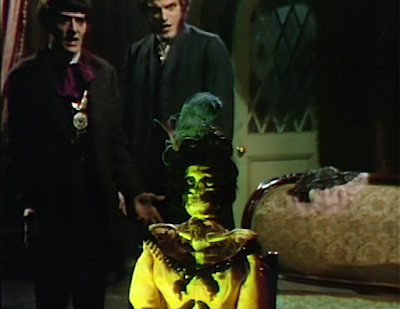 John: Aristede was wearing so much make-up today that in the shot outside of Collinwood, he almost looks like a mannequin—which is even creepier than normal! 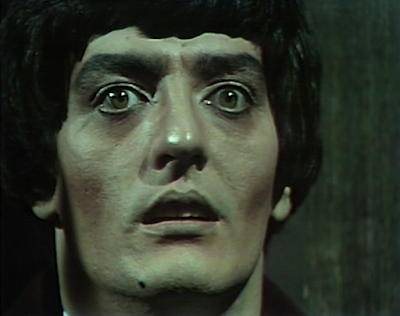 Christine: He appears to be wearing the same amount of make-up as usual. It just seemed more noticeable and mannequin-like because of his unblinking stare in close-up.

John: Wouldn't Quentin have any number of things he could tell Edward to convince him that he was in fact Quentin?

Christine: You would think, but I don't expect Edward would believe it even if he divulged his most embarrassing childhood secrets.

John: Our old friend the wide-eyed skeleton! How long has it been? And a skeleton in a dress! Just like our skeletal bride. It's like the dream-curse all over again! I sure hope will see more skeletons in the days ahead! 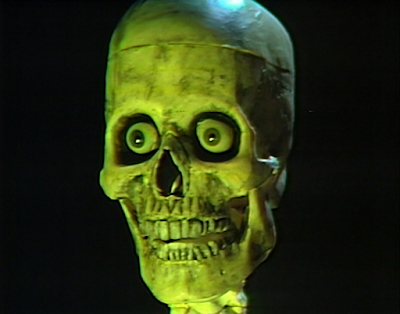 Christine: I believe Episode 739 was the last time the wide-eyed skull appeared, when it showed up in Charity's dream with fangs. I hope maybe we'll get to see the wide-eyed skull and skeletal bride together in the same scene in the future. It's too bad they chose to use Cassandra's wig and couldn't find one that more closely matched that of Wanda Paisley. It looks like it's back to the I-Ching drawing board, which surely means we won't be back to the future anytime soon. Down for the Count:
Barnabas was staked in his coffin 11 episodes ago. 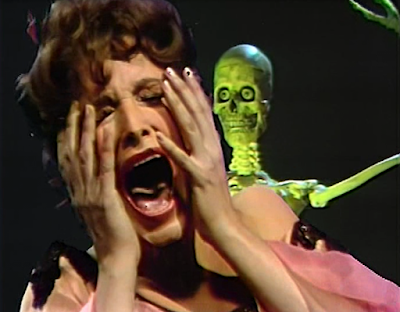