Quentin is at the train station when Angelique appears. She realizes that he's going to New York to find Amanda. He says he tried to care for her, but he loves Amanda. She tells him not to get on the train, and he says she can kill him if she wants. She promises that she won't harm him if he gets on the train, but adds that Amanda will not be as fortunate. She pulls out a doll and Amanda's brooch, suggesting that she'll die horribly and painfully, if Quentin gets on the train. She leaves Amanda's fate in Quentin's hands. He says he has no choice. Angelique is pleased. He walks away from her, and she reminds him that they will be married. She tells him to return to Collinwood and start planning their wedding. She assures him that in time he'll no longer detest her. They leave together. 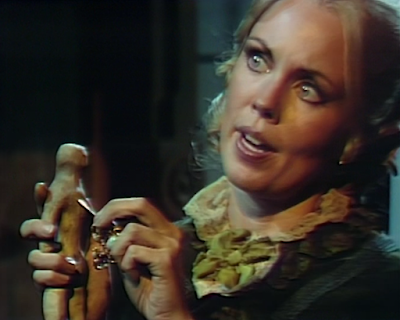 Edward is writing a note when Kitty comes into the drawing room. She invites him to go walking with her, and he explains that he's expecting a personal phone call. She flatters him, and is interrupted when the phone rings. She steps out and he takes a call from the doctor to get an update on Judith's condition. 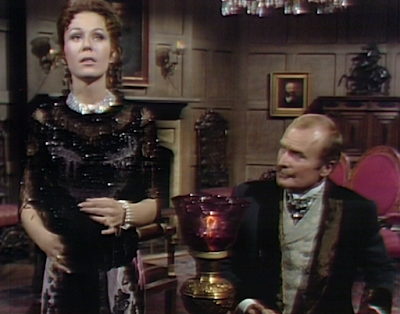 Kitty is walking in the woods when she sense someone nearby. She runs off.

Edward is sitting in front of the fireplace when there's a frantic knocking on the door. He opens it and Kitty rushes in, trembling. She says she was being watched in the woods. Angelique comes in the door and Edward goes to introduce her. Kitty accuses Angelique of spying on her, and begins to choke her. 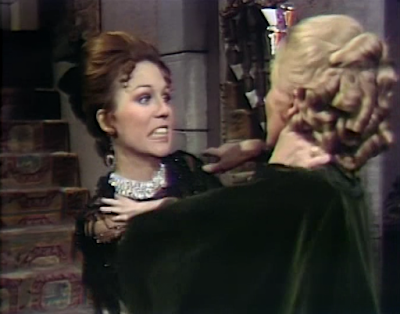 Edward pulls her away, and Kitty asks what happened. She doesn't believe it when they say she tried to strangle Angelique. Kitty apologizes, and says she couldn't have been herself. She begs forgiveness, and Angelique accepts it. Edward takes her upstairs. 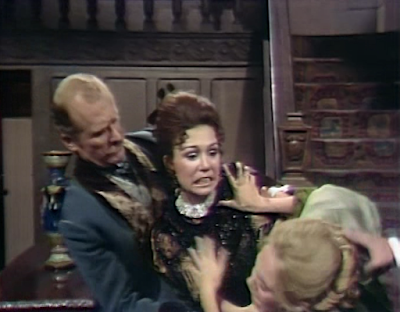 Angelique tells Quentin to join her in the drawing room to discuss wedding plans. He tells her he knows why Kitty attacked her. He says his hate for her must have been transferred to Kitty, and she too wanted to kill her. Angelique assures him that the reason she attacked her has nothing to do with him. She tells him that any time within a week will work for their wedding. He suggests a week from today, to put it off as long as possible. 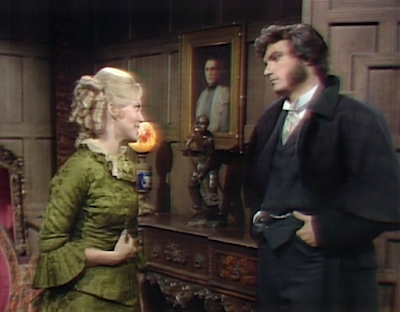 Edward suggests that Kitty may have kept her feelings in check for too long. He apologizes for not accepting her offer to go for a walk. He tells her that he would really like to look after her. She says she may take a good deal of looking after, and he says he will provide it. 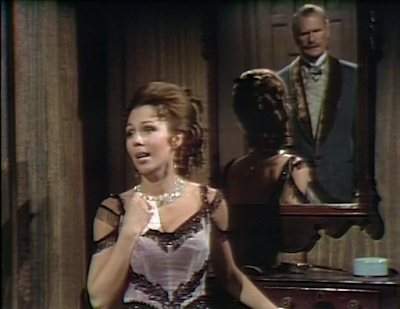 She says she's frightened, and starts to cry. He hugs her to console her. She asks if he'll always protect her, and he assures her that he will. 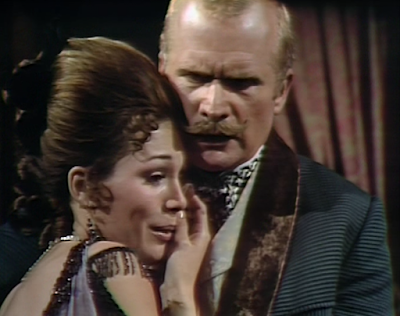 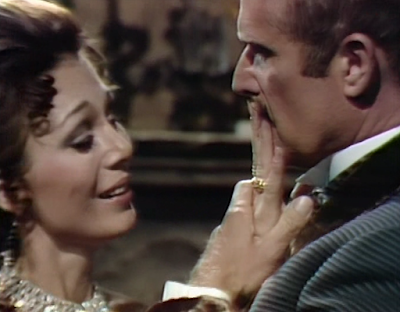 She bids him goodnight, and once he's gone, a wicked smile appears on her face. 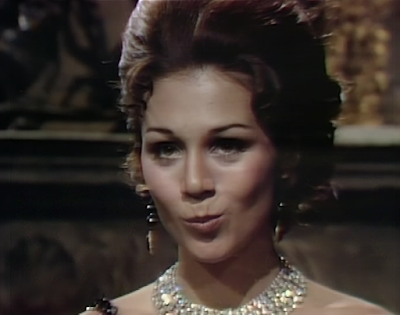 Edward comes into the drawing room. Angelique explains that she and Quentin will be married at the end of the week. He offers congratulations, and then asks to speak to Quentin alone. Edward says that he doesn't like the way he treats Angelique, reminding him that she was victimized by Barnabas. Quentin says he will always treat his bride as he chooses. Edward than points out that Quentin found Barnabas in his coffin, and despite his killing Carl, he left Barnabas alive. He asks why he let Charity kill him. Quentin reminds Edward that he had Barnabas locked up, and he left him to let the sun to do his dirty work. Edward says he will never trust Quentin completely. Quentin points out that if Edward was such a good judge of character, he wouldn't be getting so close to Kitty. Edward asks what he means, and Quentin says he'll let him find out for himself. 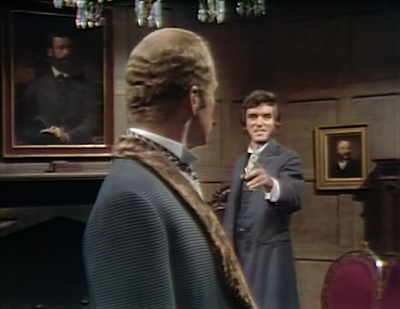 Kitty tosses and turns in bed, having a nightmare. She sees Angelique refer to her as Mademoiselle, and says she will give her something so that she will never forget him. A bouquet and a book of poetry. She says it's her favorite, and opens it to read a poem. Angelique tells her that everything is so beautiful, but she should be careful, as too much good fortune will make the gods jealous of her. 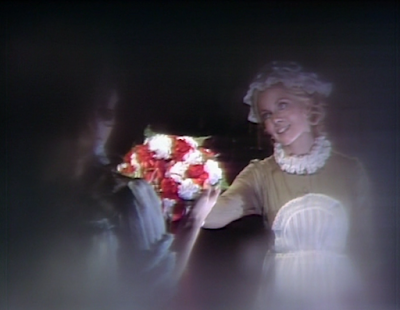 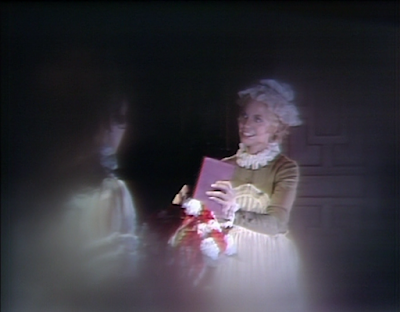 Kitty sits up in bed, confused. She sees the flowers and book on the table. She says it's not all in her mind, and that something is actually happening. 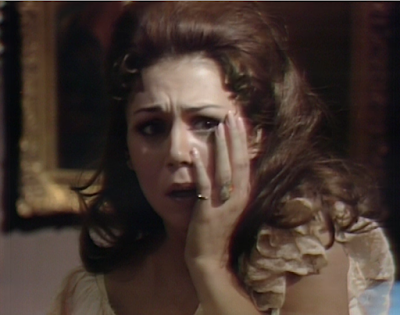 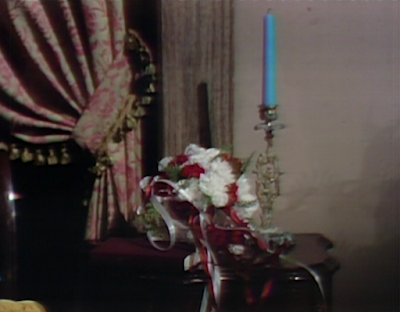 John: Dr. Seward is taking care of Judith? As in Count Dracula's Dr. John Seward? I wonder if that was just a throwaway bit to allow Kitty to go out on her own, or if they're hinting that Judith may be returning from her 'vacation' soon.

Christine: I hope we'll get to meet Dr. Seward. Perhaps Professor Van Helsing will arrive with him.

John: Interesting that while Angelique clearly recognizes Josette in Kitty, there's almost no reaction from her when they meet. We really need Barnabas back to prop up that love triangle.

Christine: Don't you hate when you wake up from a weird dream with a fly crawling into your mouth? KLS, the consummate professional, stays in character while the pesky fly makes the rounds around her nose, and when it aims for her eyeball, deflects it with what appears to be a worrisome gesture rather than an obvious wave of the fly. What an amazing actress! Also, I'm giving "Pesky Fly" a spot in the character list, since that little guy seems to be making numerous appearances. 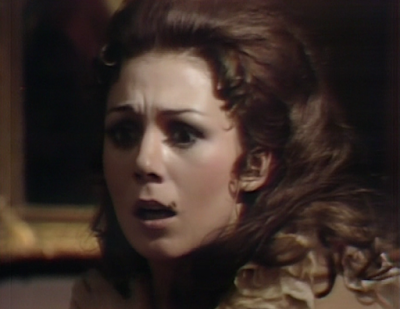 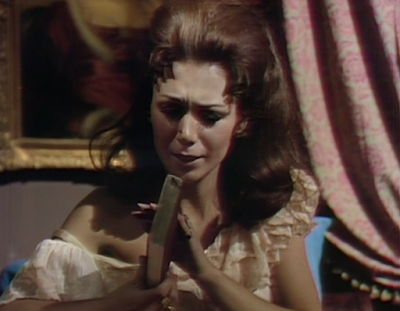 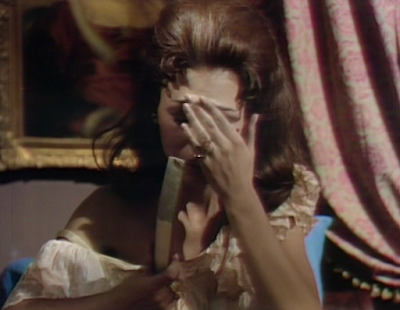 John: Do we need to start a parallel countdown to the wedding of Quentin and Angelique? I'm guessing not, as I have a hunch that it's never going to happen...

Christine: I was thinking about it, but I guess we don't want to overdo the countdowns. What is up with Angelique's fascination with marrying men who don't love her? She's a beautiful witch. You wouldn't think it would be hard for her to find some attractive satan worshipper who'd appreciate her for who she is. Incidentally, I think Kitty has some of the prettiest, most sparkly costumes in the series. 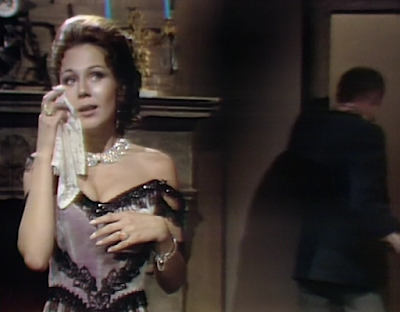 Down for the Count:
Barnabas was staked in his coffin 7 episodes ago.
Posted by John Scoleri at 6:00 AM