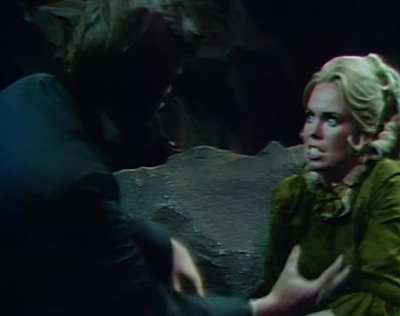 Angelique comes to, and sees Petofi-Q standing over her. He tells her that she will stay where she is until they have an understanding. He says she is his prisoner, and will stay there indefinitely, completely under his control. She tells him that he doesn't control her. He points out that her powers have been neutralized. She says he won't trick her again. She asks where he's keeping her, and he says she's close to Barnabas in a cave at the base of Widow's Hill. She sees Barnabas' chained coffin. She asks how long he plans to keep her there, and he tells her indefinitely. 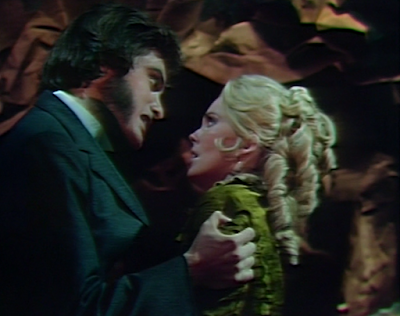 He asks her what she's been up to, with her secret trips to the rectory. She says she was visiting Julia, who she became friends with after she arrived. He asks why she continued to go after she disappeared. She says she thought she might find her. He asks if she also thought she would find Julia in the cove near Shipwreck Point. He says he had her followed. He says he wants to know the reason she and Julia spent time together, and who she went to see in the cove. She denies knowing who he's talking about, and says that if she did, she wouldn't tell him. 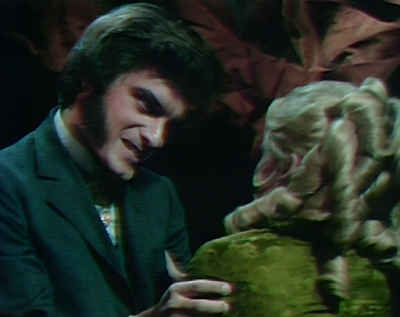 Kitty comes downstairs with a key. She hears the music box and walks to Barnabas' portrait and stops, startled, as the music stops. It starts again, and this time is startled when Edward places his hand on her shoulder. He asks her about the key she is holding, and she says she found it in her room. She snaps at him and he tells her that perhaps she should consider where things stand between them, and he marches upstairs. 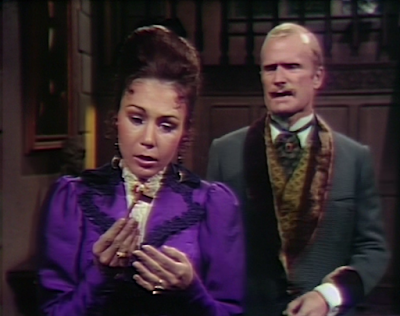 Petofi-Q tells Angelique that he's convinced she and Julia are plotting against him. She says what she is doing is none of his business. He tells her that she can stay in the cave, which he'll have resealed, and leave Aristede outside to guard. He adds that if she doesn't want to help him, she can spend the rest of her life there when he travels to the future. He leaves, and she stands over Barnabas' coffin, telling him that she needs him now. 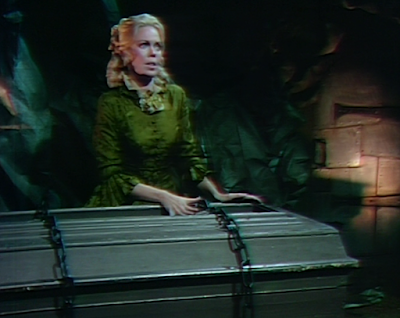 Kitty comes downstairs and finds Edward in the drawing room. She says she's thought things over, and has decided to leave Collinwood. He's shocked. She reminds him how upset he was with her. He asks if she's leaving because of what he said. She says she's already written to her mother letting her know to expect her. 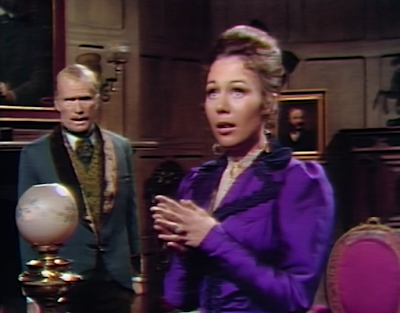 He says she should write her mother a follow up letter, letting her know she changed her mind. He apologizes for speaking harshly to her earlier. He pleads with her to stay, and she agrees. He leaves her to write her letter. 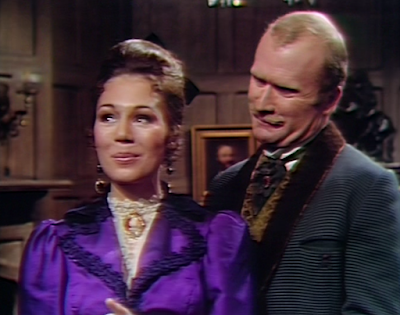 Edward finds Petofi-Q in the foyer. He asks what he did to Charity. Petofi-Q says he's done nothing. Edward says she sent him a note that she is afraid of Quentin. Edward goes up to Charity's room, and Petofi-Q joins him, saying he has a right to face her. 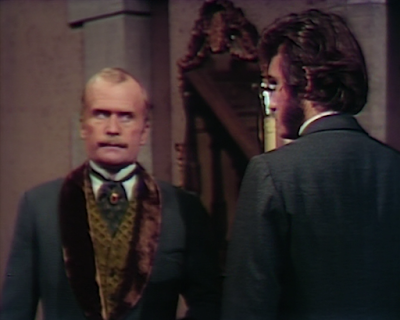 Charity is in her room when Edward arrives. She opens the door and is upset to see Petofi-Q with him. Edward says no one will harm her. He says that her note says Quentin threatened her. She says he stood outside her door last night and told her that her days were numbered. Quentin doesn't deny that he said if she continued to speak of him, her days in the house were numbered. Charity tells Edward that her instincts told her that he isn't Quentin. Edward asks her to look at Quentin, and asks if it's him or someone else. She says she could have been wrong. Edward says that she shouldn't be frightened of him. Edward says that she must learn to control herself, or they will have to send her somewhere where someone can look after her. 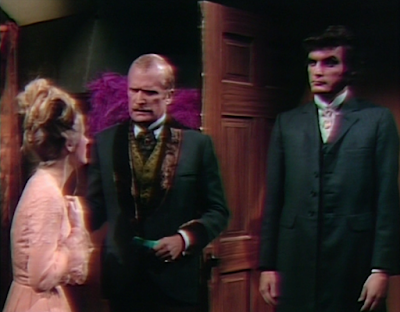 Kitty finishes writing a letter when Petofi-Q comes in. He asks if he can play some music, and she says that's fine. It's Mozart. She says his taste in music has changed, since she has only ever heard him play one song. He asks her if she's also changed, and she agrees that she has. She reads her letter to herself, telling her mother that she expects Edward to propose to her. She stops when she realizes that she referred to the date as 1797. Petofi-Q hears her say the date, and she excuses herself. 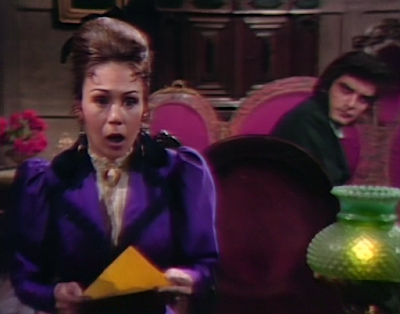 He picks up the family history. Edward comes in and mocks Quentin for reading a book and listening to classical music. He says the millennium must have arrived. 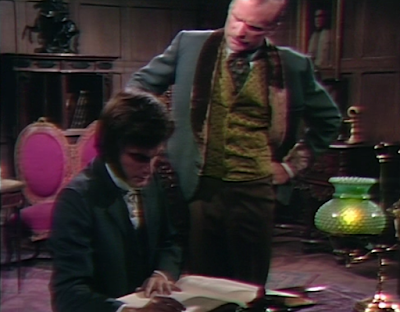 In the middle of the night, Kitty comes downstairs with the key in her hand. She goes to the portrait of Barnabas, and then out the front door. After she's gone, Petofi-Q comes out of the drawing room. 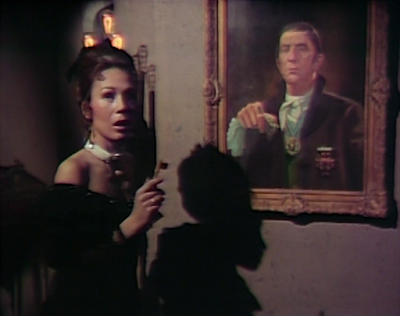 Kitty is in the old house, and uses the key to unlock the door to Josette's room. She sees the portrait on the wall, and says, "She looks like me." She sees the painting is dated 1797. She pours two glasses of sherry and sits down. She hears footsteps in the hall... 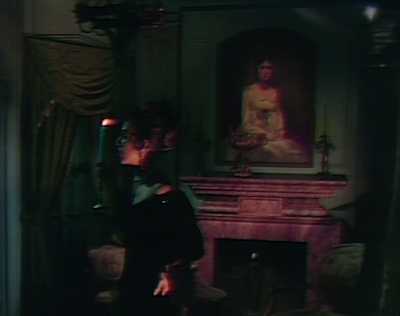 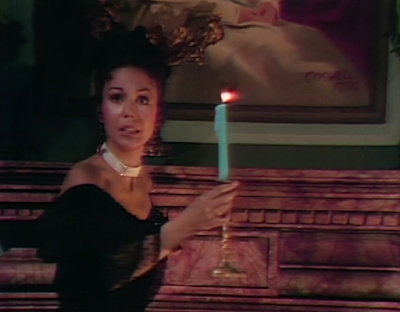 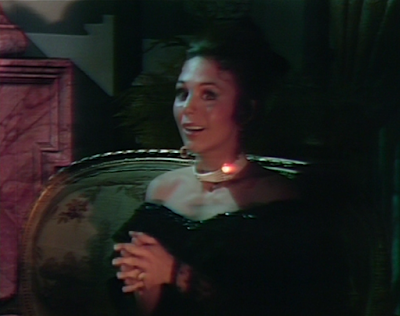 John: With Angelique locked in the cave with Barnabas' coffin, it seems like he might be revived in time to celebrate Halloween! 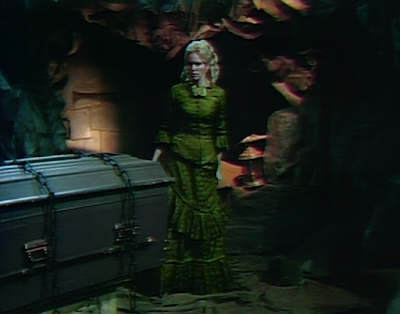 Christine: That would be a nice treat, especially if he gives her a little nip on the neck. He's got to be awfully thirsty by now. It will be interesting to see if they reconcile to fight Petofi together. At least until she falls in love with him again and then gets mad that he loves Kitty better and then sends her over the cliff again. I wonder if it the heart shaped cave was purposeful or if I'm reading too much into the heart of the story being Angelique's obsessive love for Barnabas.

John: Even knowing that Quentin was possessed, I was shocked when he put on a record that wasn't his theme song. It says something that even Kitty, the most recent arrival to Collinwood, could even spot that as strange behavior.

Christine: Petofi seems to believe he can explain it away as Quentin finally developing a sense of culture. Nobody should believe that, most of all his brother Edward, who should have been the first one to suspect that Pansity was right about Quentin not being himself.

John: I'm sure audiences were supposed to believe that Barnabas was arriving to enjoy a sherry with his latest reincarnation of Josette, but you can't fool me. I think they tipped their hat by showing Petofi-Q coming out of the drawing room when Kitty left the house. All that said, I do hope we see Barnabas before the week is out!

Christine: I don't know. It sounded like a cane was hitting the floor on the way to Josette's room. Perhaps Petofi will catch Barnabas on his way to Josette. Portrait watchers may note that someone has altered history, since Josette's portrait now has an artist's signature in the corner, dated 1797, even though we saw it delivered to the Old House in 1795, sans signature. 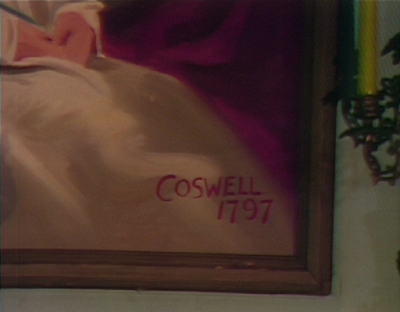 Down for the Count:
Barnabas was staked in his coffin 20 episodes ago. 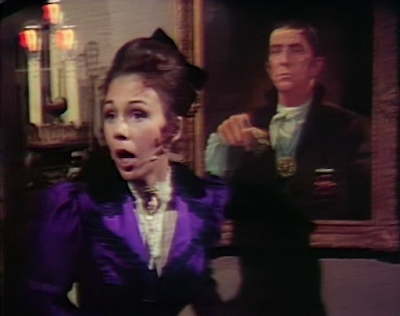 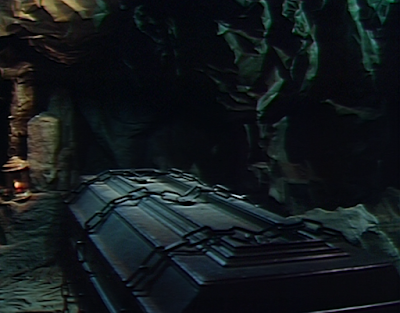