Maggie follows David, and outside of Quentin's room, she calls for him, telling him that she knows he's there. He hides on the other side of the wall in Quentin's room. She leaves, and David turns to see Quentin standing with his hands on his hips. 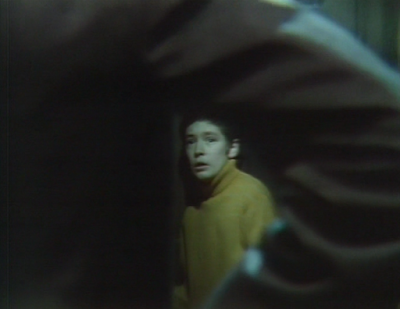 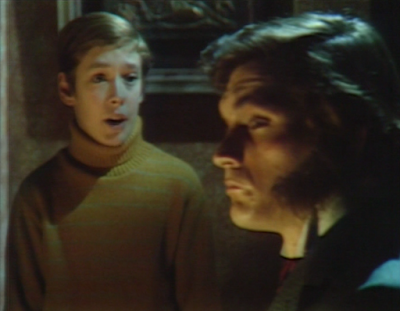 Liz asks Mrs. Johnson when dinner will be ready, and asks her to bring David a tray in his room because he's being punished. She asks him to stay with David while he's eating, and Mrs. Johnson asks if Maggie can do that. Liz asks her what's the matter. Mrs. Johnson tells Liz that she'd rather not go to David's room at all, because he frightens her. She says the kids are playing a monstrous game, trying to scare them all to death. Liz can't believe that she's actually afraid to be with David. She demands that Mrs. Johnson bring David the tray and stay with him, and she's sure nothing will happen to her. 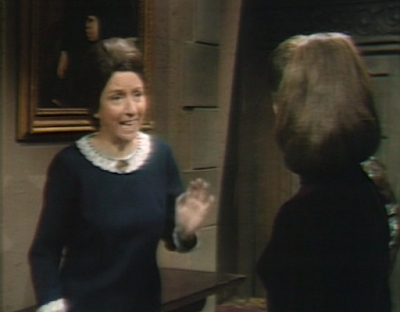 Maggie checks David's room, and finds the old outfit. There's a knock at the door and it's Mrs. Johnson with his dinner. Maggie says he's not there. She then asks if Mrs. Johnson has seen the old coat, and she says it's what he was wearing when she caught them playing dress up. Maggie says it's Victorian. Maggie asks her to leave the food and let her deal with David. She says as soon as she finds out what he is up to, she'll speak to Mrs. Stoddard. She shuts the light and puts the coat back before sitting down in a chair and waiting for him. 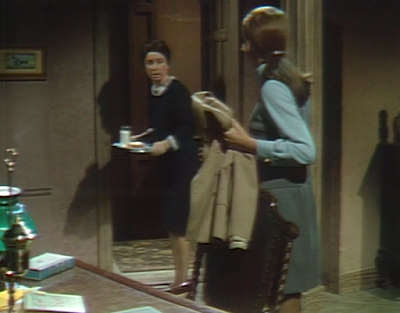 Liz sees Mrs. Johnson come downstairs. She asks if David did anything to frighten her, and she says no. Liz then asks if she's been working too hard. Mrs. Johnson says she's never been healthier.

David sneaks back into his room and turns on the light. He sees Maggie in the chair waiting for him. She reminds him that he knows he isn't supposed to leave the room. He says he went to wash his face and hands. He shows her clean hands. She asks what else he did, and he says nothing. She doesn't believe him. He lies down on his bed. She says she followed him into the West Wing, and he says she thinks she made a mistake. She says the only thing she doesn't know is how he got out of the storage room without her seeing him. He denies it. He offers a false apology, but she cuts him off. She asks if the storage room is where he found the old phone. He tells her he found that in the cellar. 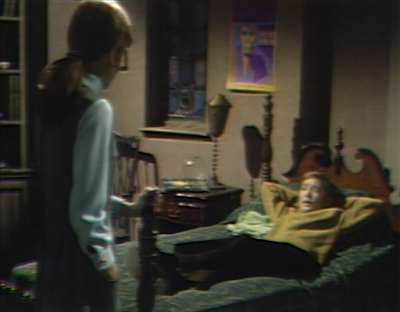 She asks why he went to the room. He tells her there's something wrong with her eyes. She warns him that her will is stronger than his. She tells him he's confined to his room tomorrow, too, and if he doesn't tell the truth, she'll extend it. He tells her that only his aunt and father can punish him. She reminds him his father is gone, and that his aunt gave him authority over him. He tries to leave the room, and she says he can't. She warns him that he doesn't want her to get his aunt, and tell her where he's been. She also points out that he took his flashlight with him, but didn't return with it, meaning it's probably still in the storage room. She tells him to come see him when he's ready to tell the truth, and he replies that he's going to get even with her. 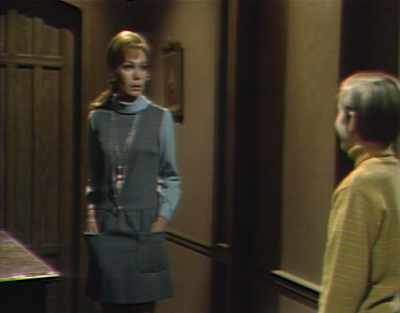 In her room, Maggie is reading when she hears a door. She goes into the hall to investigate but sees nothing. She sits back down and the light on her end table goes out. She tries the main room light which also doesn't work. She leaves her room.

Maggie tells Mrs. Johnson that the lights in her room are out. She thinks it might be a fuse, but Mrs. Johnson says if the other lights are on, it's likely the bulbs, and she'll bring replacements.

David watches the hall from his room with a smile on his face. 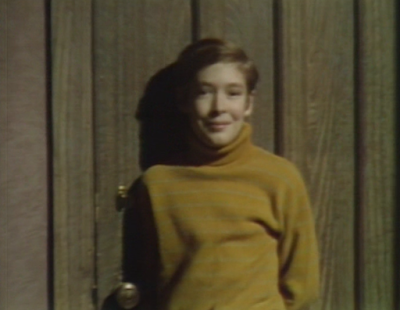 Maggie returns to her room and the telephone she took from David starts to ring. She yells that he can't scare her. She knows the phone isn't even connected. She tells him to come out from where he's hiding. The windows slam open. Mrs. Johnson comes in and says that the lights all appear to be working. She asks if she was calling for David, and Maggie says that he was there because the room to her door was open, and she said she heard the phone ringing and knew it was David playing a trick on her. She goes to David's room, but doesn't see him as he was hiding. David recites a nursery rhyme. 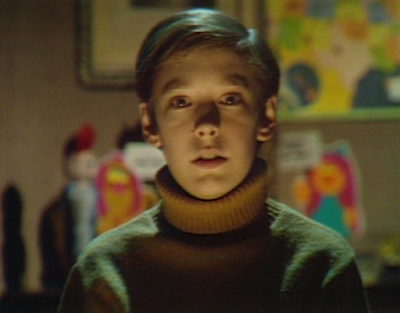 Maggie returns to the storage room in the West Wing. She opens the door and screams when she sees Quentin standing inside. 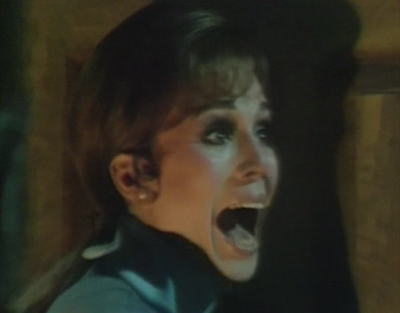 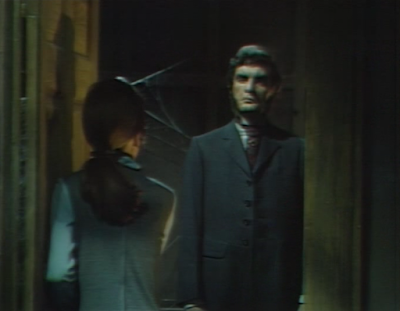 John: Wow, we haven't seen David so nasty and disrespectful in a long time. He hasn't come across as so downright evil since he was locking Vicki up or attempting to kill his father!

Christine: He is so much more interesting as a juvenile homicidal maniac.

John: I have to admit I was a bit surprised when Mrs. Johnson lied to Liz. It probably isn't going to come up again, but you think she would have told her that David wasn't in his room where he was supposed to be when she brought him his tray. She's usually a stickler when it comes to following the rules.

Christine: Technically, she didn't lie when Liz asked if he frightened her and she said no, since he wasn't around to frighten her, but I am surprised she held her tongue, which she rarely does. Mrs. Johnson had quite a few full ashtrays to empty in the drawing room. Who do you suppose is doing all the smoking in there? 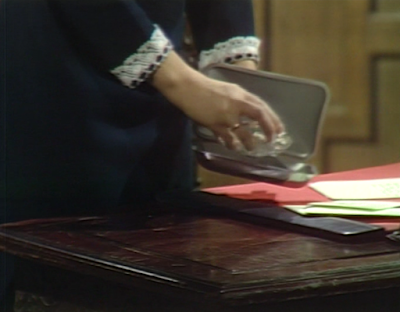 John: Maggie played the full spectrum today. She was tough as nails dealing with David - tougher than I think we've ever seen her before, and then right back into damsel in distress mode at the first sign of Quentin's ghost. I look forward to seeing how their relationship develops!

Christine: I anticipate another governess being locked in the closed off section of the house and being left for dead. Will Josette come to the rescue this time? I love how David asked Quentin if he was mad. Isn't he always mad? 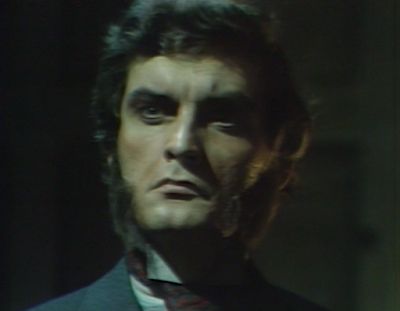 Seeing this episode again makes me really appreciate the "scary and silent" Quentin Collins. I noticed that this episode was directed by Dan Curtis himself, so you know there's going to be an extra dark/scary feel to it. And of course, any episode with healthy doses of Clarice Blackburn and KLS gets a big thumbs-up from me!