Chris has exhumed a child's coffin. Barnabas says they had better open it. Chris pries it open with the shovel and lifts the lid. Barnabas says it was an infant. He reaches in and lifts out a pentagram necklace with two points facing down. Barnabas says someone needed protection from a werewolf. 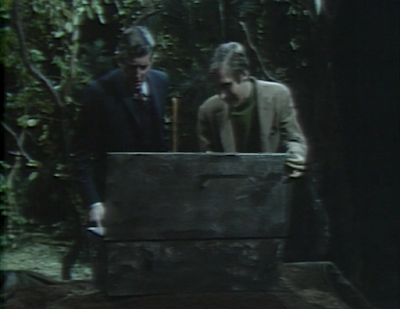 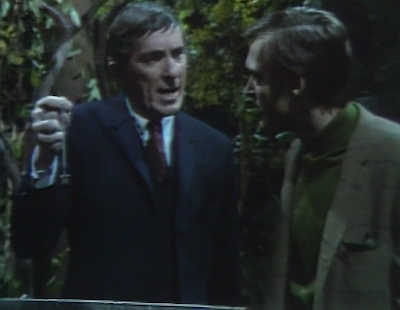 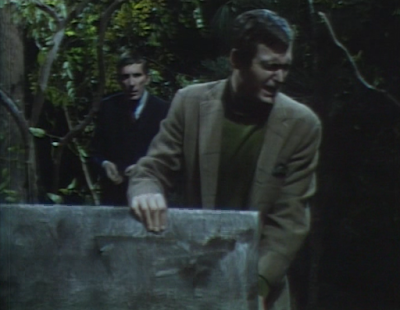 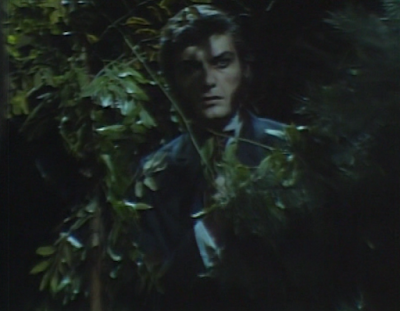 David sneaks down into the drawing room at night to pick up a copy of Ghosts & Exorcism. Carolyn finds him and he drops the book. She asks what book he has, and he says he wanted something to read himself to sleep. She takes it from him and asks why he'd want to read from Ghosts & Exorcism. He asks her if she saw a ghost. She asks if he has. He mentions that they live in a strange house. He mentions his father falling down the stairs, and she and his aunt being attacked by animals. He starts to says something else and stops when he sees the ghost of Quentin watching him. He excuses himself and runs up to bed. 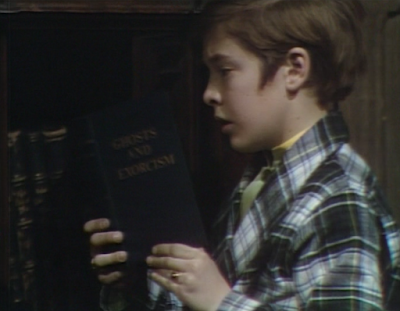 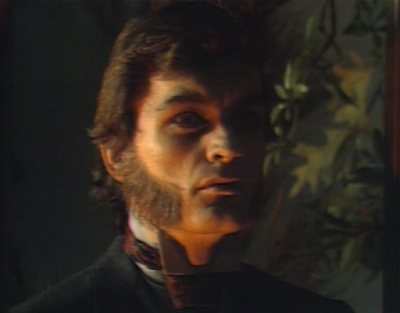 Barnabas suggests that the woman they saw must be the infant's mother. Once the grave has been filled, they leave the scene.

David tells Quentin that he doesn't want to do what he's asking. Quentin glares at him. David agrees to get the medallion for him, and Quentin smiles. 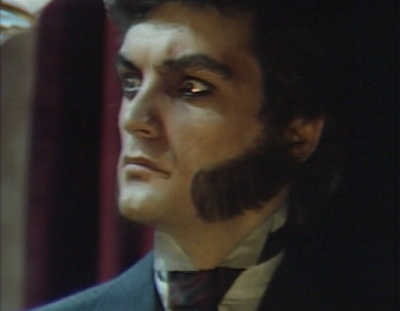 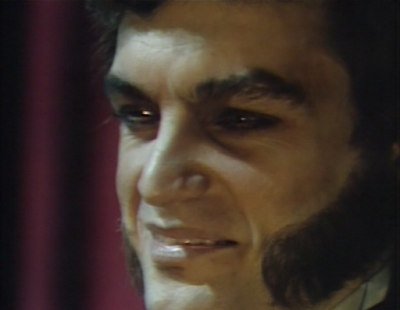 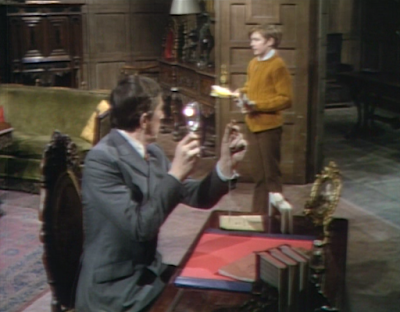 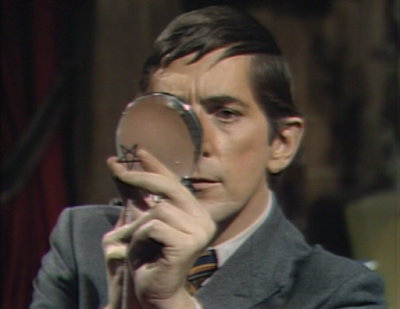 Barnabas says he's reading the inscription on the back of a medallion. He says it protects against the wrath of Cerberus, the guardian to the gates of hell. 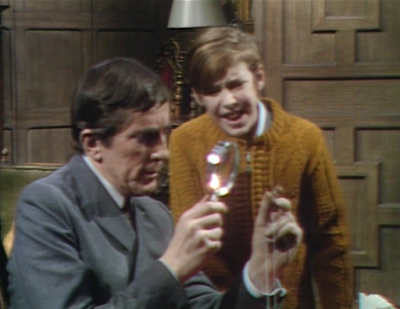 Carolyn walks in and asks if she can see it. She says the jewelers mark is familiar. She points out that it's from Braithwaite, the same as the candlesticks in Collinwood. Carolyn says she and David need to talk, and he weasels his way out of it. 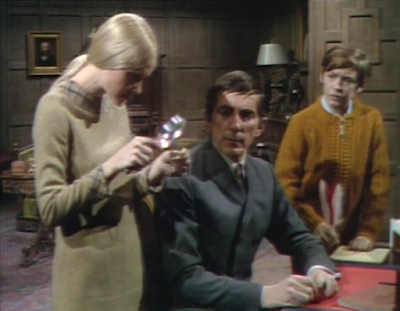 Barnabas makes a call to Braithwaite's, and David continues to make noise with his darts. While Barnabas is on the phone, David takes the medallion. Barnabas explains that he'd like to talk to the jeweler about a medallion made for them. The man explains that they have made most every piece of silver in Collinwood. Barnabas arranges to meet with the man in 30 minutes. David continues making noise, and Barnabas asks how many times he has to ask him to be quiet. Barnabas looks for but cannot find the medallion. David asks if he means the one he put in his pocket. David then says it might have fallen on the floor. They look for it, and Barnabas asks if he picked it up to look at it. David says he doesn't like old things. Barnabas asks him again if he took it. David empties his pockets. Barnabas apologizes for accusing him. David takes his target set and the medallion and leaves the drawing room. Barnabas is mystified. 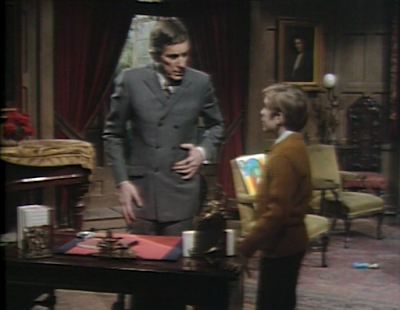 Mr. Braithwaite tells Barnabas that it's a pity he lost the medallion. He looks at a drawing and says it's an unusual design. He explains he has made some odd things. He says his father, who died in 1901, always admired the Collins' taste. Barnabas says he's interested in knowing who commissioned it. Braithwaite says he has a memory, and then says it's gone. Barnabas says it's vital to know who requested it. Braithwaite says his records go back a long way, and he'll look into it after the shop has closed. Barnabas asks him to call when he finds the info. 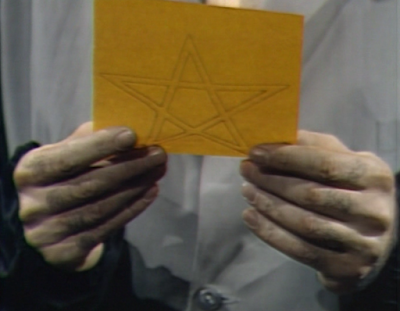 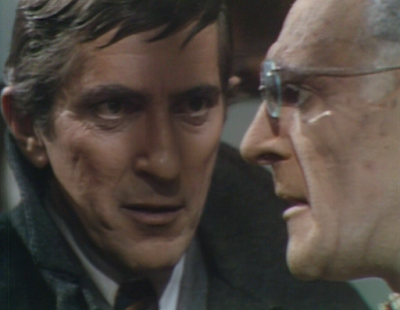 Quentin's ghost holds the medallion. David says he promised not to do anything terrible with it.

Chris opens a bottle of champagne and pours glasses for he and Carolyn. He aks her what's the equation, and she says she's been trying to get him to take her to dinner for weeks. he tells her he's glad they're having dinner together. Barnabas comes in and Carolyn offers him a glass of champagne. She leaves to get ready, and Chris asks if there's news from the jeweler. He says they must be patient. Carolyn returns with her coat and she and Chris leave. 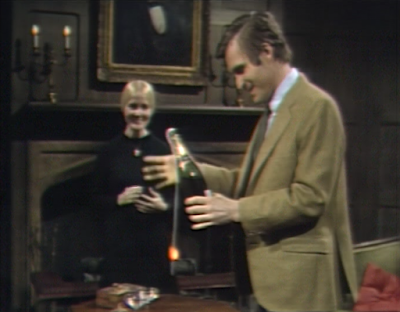 David comes downstairs and finds Barnabas in the drawing room. He asks if the medallion he lost was worth a lot of money. Barnabas says no, that it just meant something to him personally. He tells David to let Mrs. Johnson know he'll be in his father's study awaiting a call.

Braithwaite calls Collinwood and David answers. He asks to speak to Barnabas. He says he has the information he asked for, and he offers to bring it to the house on his way home. Quentin takes the phone from David and hears Braithwaite describe how he has the ledger indicating who ordered the piece. He says it was one of the first pieces he made himself. Quentin hangs up the phone and David says he has no right to do that. He says he has to tell Barnabas, but Quentin approaches and David backs up the stairs. 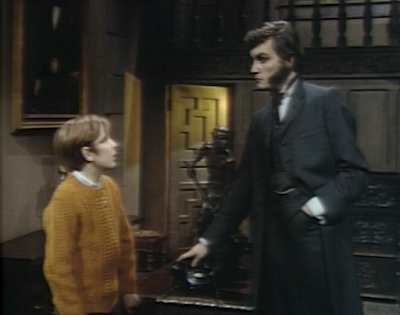 John: I love how after Barnabas tells Chris the pentagram can help them, Chris asks him how, and he says he doesn't know, but it should! Christine: I love the way Quentin's reflection was captured in the mirror so that it looked like he had lips in his forehead. Truly disturbing! 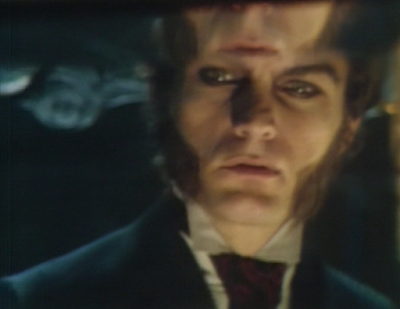 John: In the days before the Time Life Mysteries of the Unknown library, I guess you had to assemble your own collection on things like Lycanthropy 101 and Ghosts & Exorcisms. Of course those don't seem like volumes that either Roger or Elizabeth would have stocked the shelves with... so one wonders if Joshua invested in that set after Barnabas was chained up a few hundred years ago.

Christine: I'd like to think that Joshua would have kept such a collection around to continue seeking a cure to Barnabas's vampirism, though it's hard to believe that David or anyone else in the family wouldn't have accessed these supernatural tomes sooner if so. Perhaps Liz acquired them after realizing that Cassandra put a spell on her, leaving her more open to the possibility of supernatural explanations for the strange events that continue to occur at Collinwood.

John: Holy crap! Abe Vigoda was on Dark Shadows!!! And while they've got layers of old age make-up on him, he already looks pretty old! I think Abe may go down as the most surprising guest star of the series! It's just a damn shame they misspelled his name in the credits. Of course if I didn't know better, I might have thought Roger Stone turned up in Collinwood. 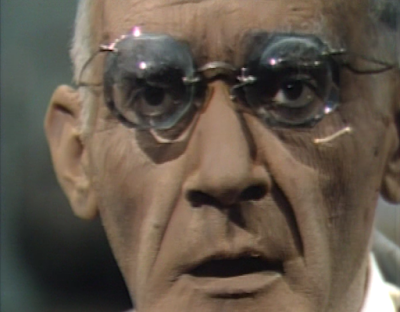 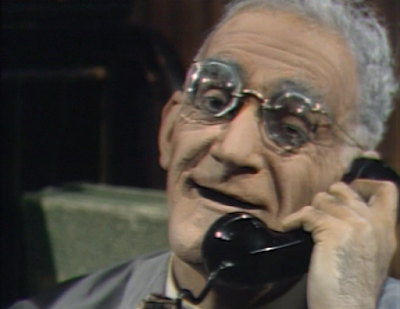 Christine: Dark Shadows has many more surprises in store for you. I was surprised to see Ezra Braithwaite claim that the portrait of the Mustache Man is his father, Ezra Julius Braithwaite. Wait until he finds out there are several reproductions of his Dad's portrait floating around town. 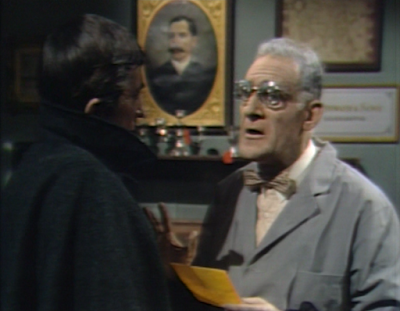 It's always hard to see Abe Vigoda on the phone without hearing Fish talking impatiently to Bernice.

I remember my first time watching the entire series a few years back. I had no idea that BOTH Conrad Bain and Abe Vigoda appeared on the show. Always a pleasure to see them pop up again on repeat viewings.

Does anyone know the tune that plays on the victrola? It's a waltz. Thank you!!

Does someone know the name of the tune that's plays when ever Quentin appears.

The tune that plays whenever Quentin appears is "Shadows of the Night" aka "Quentin's theme," written by Robert Cobert. You'll be hearing more about it in the coming episodes.