Barnabas stands at the top of the stairs wondering where in the house he hasn't explored. He goes back downstairs, and before he leaves, he says that in one room, he will come to him. He goes back into the drawing room and finds Maggie in the Victorian dress. He calls her Maggie, and she asks what he called her, and who he is. He tells her that he is Barnabas, and her name is Maggie Evans, and she must come with him. She tries to say her name, and when she can't come up with it, she screams and collapses. 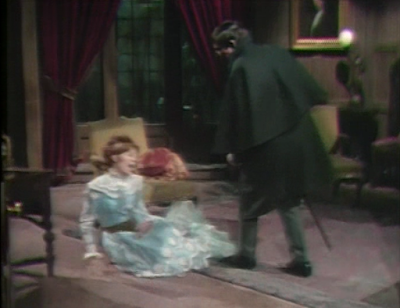 Maggie comes to and can't understand why she's dressed the way she is, or the way her hair is done. She says she tried to take Amy out of the room, and she was touched by Quentin. Barnabas asks if he spoke to her, and she says he called her another name, but she can't remember what name. Barnabas says they must find where Quentin took her. She says Amy would know, but he tells her that she's already under his control. 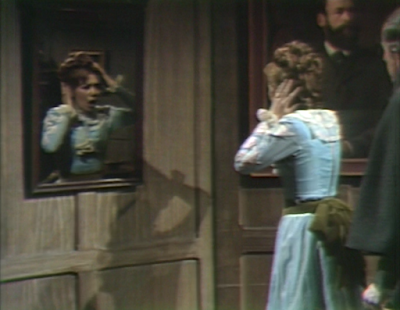 Roger returns and says he will not leave the house until he finds David. He sees Maggie in period garb, and Barnabas explains what happened to her. Roger tells Barnabas to take her to the old house. Barnabas refuses to leave him alone. Roger says he's calling the police, so he won't be alone. Maggie pleads with Roger not to stay in the house alone. Barnabas takes Maggie out, and the music begins to play. Roger boldly proclaims that his music won't frighten him, and dares Quentin to show himself. He sees a book open on his desk, and he puts down the phone. In the book, he finds a note, "David is mine." 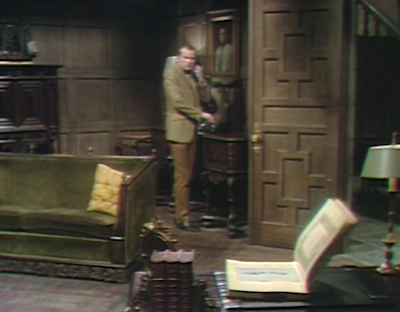 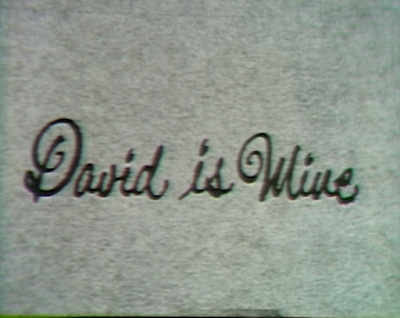 In the old house, Roger tells Barnabas that every time he picked up the phone to call the police, he heard laughing. When they arrived, the house was completely silent, and they searched and found nothing. He says he's going to meet Stokes at the house. Stokes told him that possessed children are more restless when there's a full moon. After he leaves, Barnabas thinks that at least the full moon will benefit someone. He wonders about Chris. 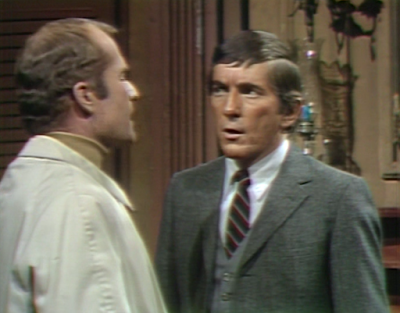 Ned calls Chris. He says that he and Sabrina haven't left town yet. He tells Chris that Sabrina is going to come out of this and talk. He holds the phone to her, and she turns away. Ned begs her to do what she did for him earlier. She manages to speak Chris' name. Ned tells Chris to come now, so she'll remember more. Chris says that he can't help her, and hangs up the phone. Ned tells Sabrina that Chris will help them, or he'll kill him. 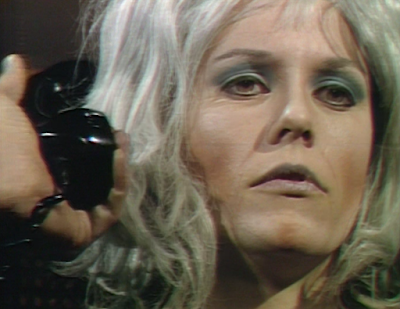 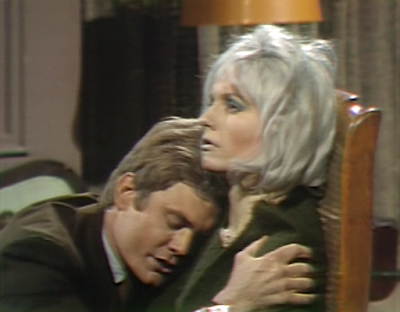 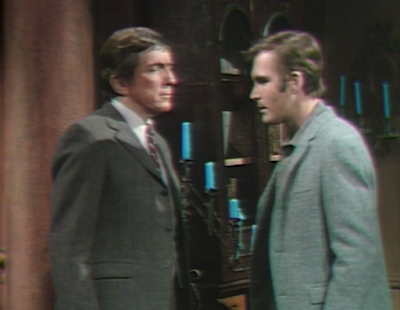 Maggie is in the old house when Roger returns. He removes a piece of material from his coat pocket and puts it in his jacket. He asks Maggie if she's feeling better, and she says yes. She tells him that Amy is with Mrs. Stoddard, and she still seems to be possessed. Roger says that someone needs to stay at the house, and wonders if Barnabas will do it. He then shows Maggie the fabric, which she recognizes from the dress she had been wearing. He tells her he found it in the fireplace in Liz' room. She calls Roger Edward, and asks what kind of power Quentin has. He asks her why she called him Edward. He says that Edward Collins was his grandfather, and Quentin was his grandfather's brother. He realizes that Quentin is trying to bring her back to his time, and wonders if he's already succeeded with David. 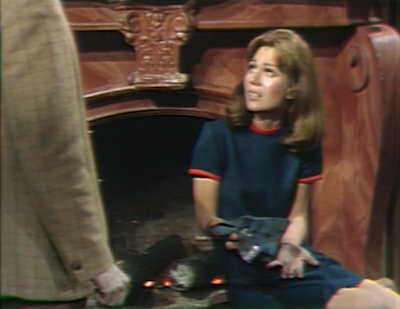 Barnabas visits Ned, who is angry that Chris didn't come to see them. Barnabas tells Ned that his staying in Collinwood is only making his sister's situation worse. Barnabas explains that Chris is in love with his cousin, and that's why it's so hard. Ned brings Sabrina out to meet Barnabas. Barnabas introduces himself. Ned asks if he thinks his cousin will end up like her. Sabrina seems aware that there's a full moon out. Ned says he's willing to shock his sister out of her condition, if that's what it takes to save her. Barnabas says goodbye to her, and she reacts to his cane. Ned says that the wolf's head is helping her remember. 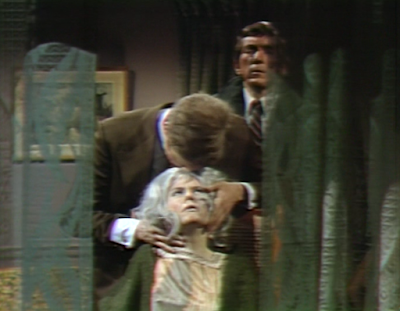 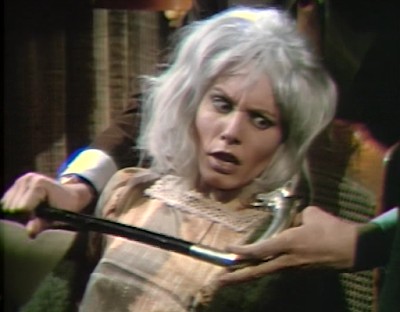 John: Why exactly would Quentin feel the need to hide from the police? Is he just toying with Roger?

Christine: He may have been concentrating on hiding David from the police, rather than himself.

John: Once again, Barnabas is more concerned about helping a monster than he is about protecting its victim.

John: I'm sorry, if a wolf's head cane was enough to trigger a reaction in Sabrina, one would think that she's not as far gone as she appears to be playing. That's almost as silly as the werewolf himself responding to the sight of the cane...

Christine: I'd say that she must be regaining more of her senses to be able to fix herself up with some blue eyeshadow and blush, but after seeing the way her brother likes to fondle and kiss her, I have a feeling he was the one to make her up today.
Posted by John Scoleri at 6:00 AM

Ah yes, the one where Maggie calls Roger by the name of Edward. That element helped me out quite a bit.

As to why Barnabas would be more concerned about "helping a monster" than "protecting its victim"? That's rather a straight-forward consideration: Reach the source of a problem, where it's coming from. If you find the source you can often eliminate all manner of problems coming from it.

I think you are right in part, though I also believe that Barnabas is interested in helping a fellow monster because he knows what it's like to be cursed, as well as have a champion to help him find a cure. Now he's paying it forward.