Liz tells Julia that she went into the children's room, and found them unconscious. She adds that the room fell silent, and then they heard music. She says she's convinced that Maggie is right—she thinks a ghost is haunting Collinwood, and possessing the children. Julia tells her that she thinks she's right about the children being possessed, but that she thinks it's by two ghosts, and not just one. 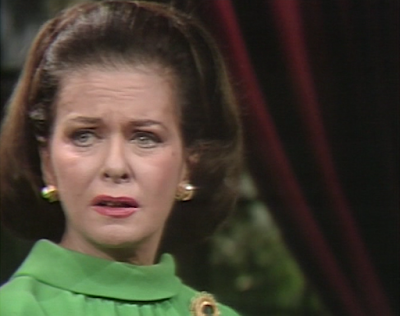 The door at the top of the stairs opens on its own.

Julia tells Liz about the ghost who she and Barnabas followed to the cottage. Liz says that she believes her, when there's a knock at the door. Liz greets Professor Stokes, who comes in and says the atmosphere to the room has completely changed. He asks her to recount the story in full detail. 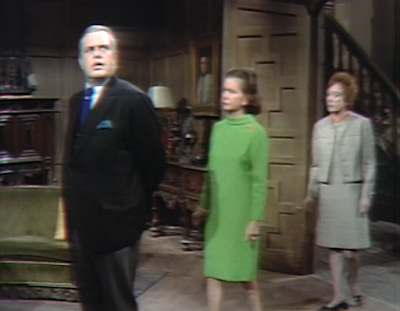 Chris is in the cottage when the phone starts to ring. He doesn't answer it at first, and then reluctantly does. Ned says he's been calling all morning. He says Sabrina would like to see him, and they're both getting impatient. Chris asks what he means, and Ned tells him it means anything he wants it to mean. 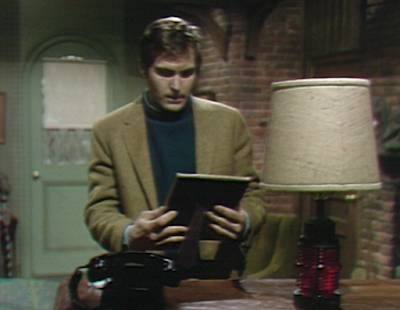 Stokes tells Liz that the disturbances in the house were not a figment of her imagination. He says there's a supernatural presence in the house. She asks what can be done about it. He says he doesn't know yet, but the greatest concern is the children. He says they have likely been possessed by someone who lived in the house in the past. He asks if they're still normal from time to time, and Liz says yes. He says that's good, as the possession is not yet complete. She suggests that they can take the kids away. Stokes says the spirits are using the children to get what they want. He says they may need the children in the house. He says he'd like to speak to Mrs. Johnson and Maggie individually, in their rooms. He goes upstairs. 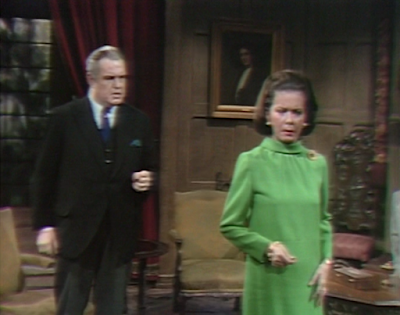 Liz asks Julia if Stokes would put the children in jeopardy, and she says that he would suggest moving them out of the house if that were the case. The phone rings, and it's Chris for Julia. He asks to see her at the cottage, saying it may be an emergency. He says that someone may know about him.

Julia looks at a photo of Sabrina. Chris asks if Ned told her that Sabrina was dead. She says he referred to her in the past tense. He says he thinks Ned may have wanted her to think she was dead. He says that she's not only alive, she's in town. Julia asks if he thinks she knows about him. Chris reminds her of what he told Barnabas; that she was there when he transformed. Julia says that he doesn't know what happened to her after the change. She says if she and Ned knew everything, why wouldn't Ned have just turned him in. She asks why they're here, and Chris says he doesn't know. Ned just told him that she was here and wanted to see him. She asks why he didn't bring her to Chris. She tells him that he needs to find out why they are in Collinsport to get any peace of mind. 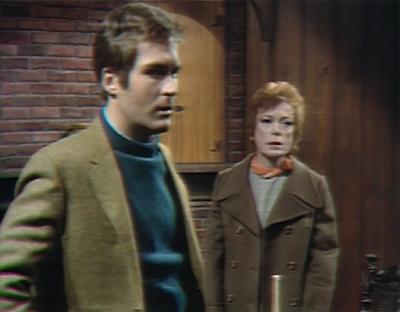 Liz is in the drawing room reading the mail when the secret panel opens behind her. A disembodied hand picks up a letter opener. Stokes calls for Liz to watch out. The disembodied hand is startled and drops the letter opener. Stokes tells her that she was almost killed. He asks where the secret passage leads to, and she says the West Wing, though it wouldn't have been used in years. He closes the panel, and tells her that the children have been using it recently. He says he is convinced that every life in the house is in danger. 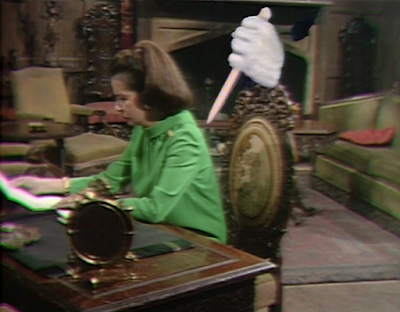 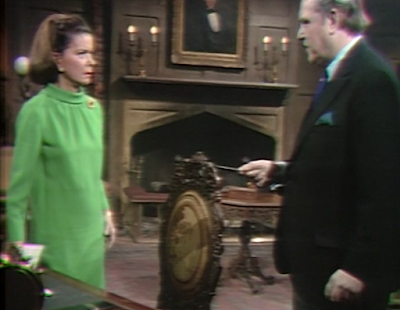 Julia tells Chris she has to go see Ned and Sabrina. He says he's afraid. She hands him the phone. He calls Ned, who tells him to get there as soon as he can. After he gets off the phone, he tells an offscreen Sabrina that Chris is on his way to see her. 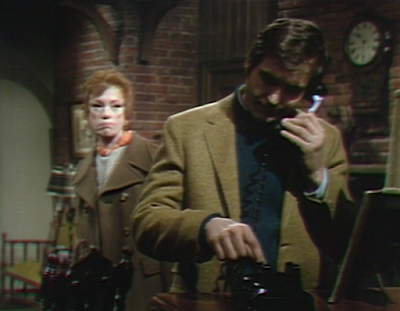 Stokes comes out from the secret passage, and tells Liz that Maggie mentioned a time where the children came into the drawing room and disappeared. He says the secret panel would be the only other way out. He tells her that he'd like to perform an exorcism of the entire house.

Chris and Julia arrive at Ned's place. Ned asks why he brought a doctor. Chris asks if there's a reason why he can't bring a friend with him to see Sabrina. Ned says he guesses not, and goes to get her. Chris says he's not sure he can go through with it. Ned opens a door, and Chris and Julia are shocked to see Sabrina, pale with white hair in a wheelchair. 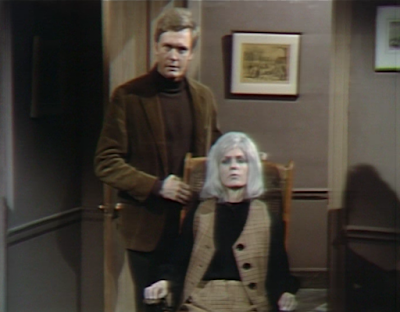 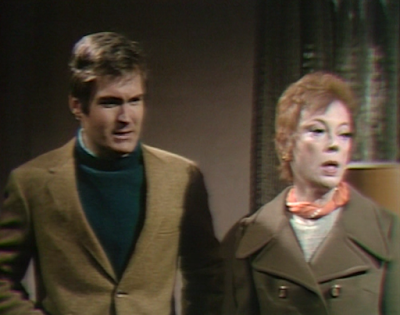 Julia recognizes that she's in a state of shock. Ned says she's been like that for two years. Ever since she returned from Chris' place to prepare for a party. Ned says he thinks Chris was there, and knows what happened to her. Ned says he went to Chris' place the next morning with the police, and it looked as if there had been a violent struggle. Chris asks if Sabrina was physically hurt. Ned says she wasn't, and tells Chris that the doctors all agreed that if Chris was in the room, it may help Sabrina snap out of it. Ned speaks to Sabrina, and tells her to look at Chris and try to remember. Sabrina stares at Chris, and then begins to blink. She raises her hand, and stands up, only to collapse to the floor. 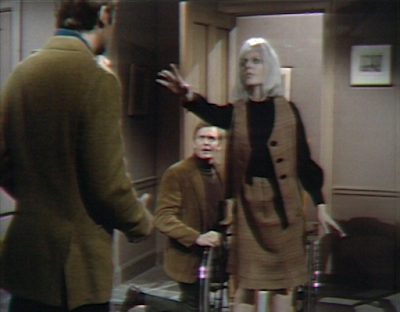 John: Ned, like Jeff and Peter, isn't a very good communicator. Exemplified by one of my new favorite Ned/Jeff/Peter lines to date, "It means anything you want it to mean."

Christine: That is a good one. Is it possible that Ned is Jeff Clark's doppelgänger? If so, which one do you suppose is the evil twin?

John: So Liz knows all about the secret panels in the house? And is naive enough to believe that David hasn't been using them for years? At this point, is there anyone who doesn't know about them? And speaking of Liz, we almost lost her to a disembodied hand today! Which, cheesy visual effect aside, had me cracking up when the hand was surprised by Stokes yelling at it, dropping the letter opener. One would think that a supernatural being might be immune to the shock of someone screaming at them unexpectedly. 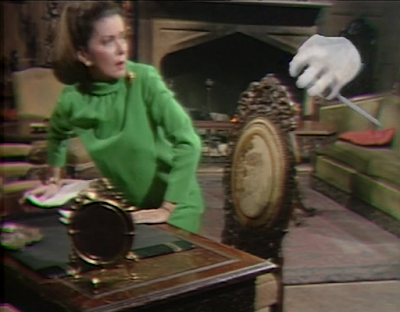 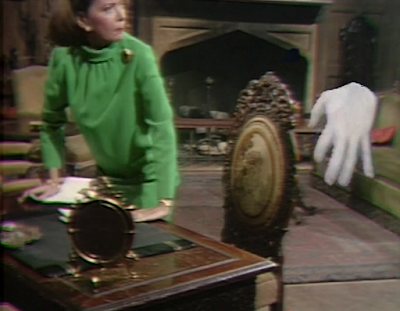 Christine: It might explain why the floating hand sped off without closing the secret panel behind it.

John: We finally got to meet Sabrina, and it turns out she's not a teenage witch. I love that they weren't satisfied with just having her comatose in a wheelchair; they had to age her to look like a crone, if not a zombie! You'd think Ned would know that she probably wasn't ready to go walking across the room after two years in this state, and yet he just watches as she stands up and falls on her face! I wonder if seeing Chris will not only restore her sanity, but also her good looks. I can't tell if  they used the same actress for the photo of Sabrina Chris has on display in the cottage. 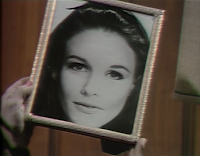 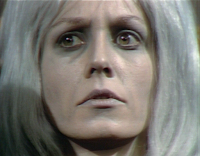 Christine: It's pretty effective makeup, but I believe it's the same actress, Lisa Richards. How fortunate that Chris keeps her headshot with him wherever he goes so we could see how much she's changed, though the look on Chris' face may have been enough to demonstrate that fact. 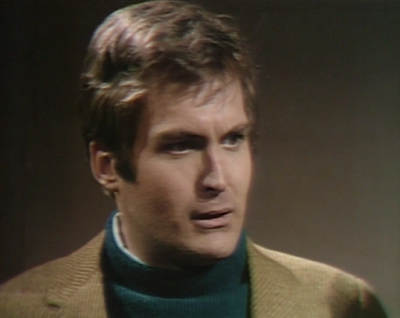