Barnabas overhears David and Amy talking about playing the game. He walks in on them and bids them good morning. He asks about the game they were talking about. They say it was just a game they used to play, and leave. Chris arrives and tells Barnabas he saw a man in the woods, staring at the house. He says he turned away and the man disappeared. Barnabas asks him to describe the man, and he says he was dressed in very old clothes. Barnabas says that he knows where the children are. 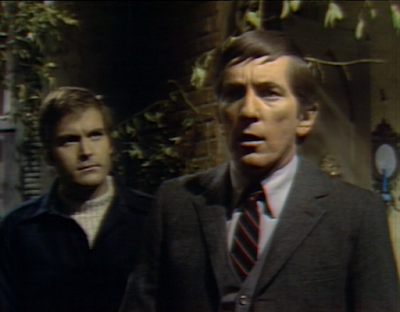 Barnabas finishes telling Chris the full story. They talk about the woman who seems to be helping them, but Barnabas hasn't had any luck identifying her. Chris says he should probably keep moving, and Barnabas tells him that he can't do that. Barnabas spies David outside and calls him back to the house. He says it's like a prison at the old house. Maggie comes out and tells him to start on his schoolwork. 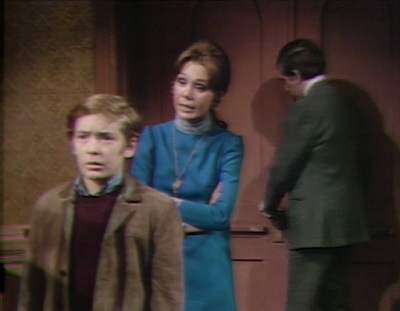 He goes upstairs and Barnabas tells her that Chris saw a mysterious man outside. Maggie asks if it was Quentin. Barnabas asks where she heard that name, and she says she heard it from David. Barnabas says he just read of a Quentin Collins last night. He shows Maggie an album to see if she can identify him. 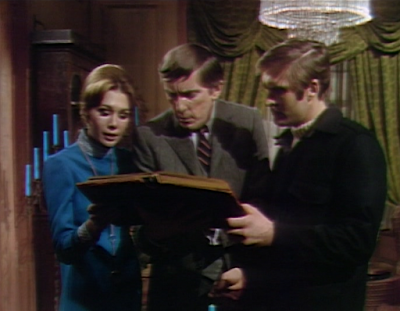 She sees a photo of Quentin, looking exactly the way he does to them. Barnabas wonders why he's inhabiting the house, and why he's possessing the children. 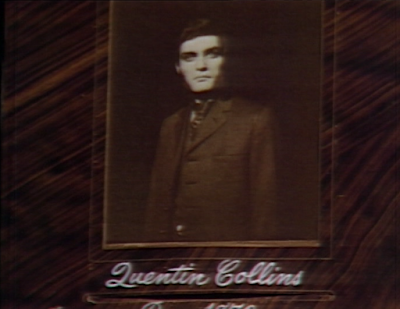 David returns to Collinwood. He starts to open the door and Amy appears, telling him he's not supposed to be there. He says he has to play the game, and she reminds him that Quentin won't let him out again. They open the door and peer inside the house. Amy warns him not to go in, and he says he's got to go get it. He reminds her that Quentin started talking to them after they found the telephone. He tells her that he needs to find it and break it up. Amy says that she'll go, and Beth will protect her. She goes into the house and calls to Beth. She says she needs to go to Maggie's room to get the telephone. She tells David to wait outside, and she heads upstairs. 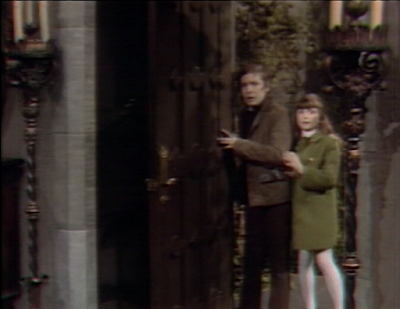 Carolyn is in Chris' cottage when he returns. She's surprised and happy that he didn't leave. He tells her not to try and understand him. She says she thought they had a romance going, and he tells her she's wrong. 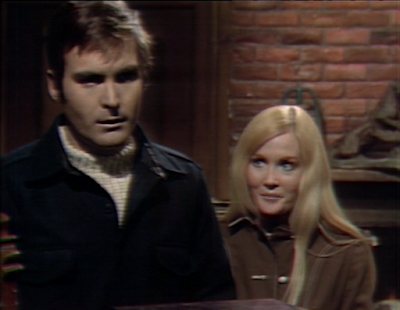 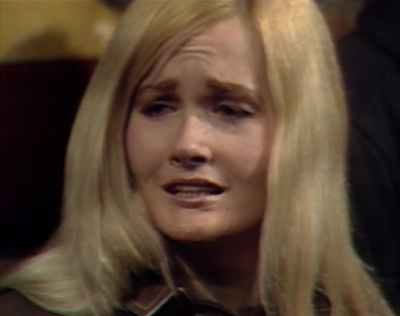 David waits outside the front door for Amy, worried that she should be back by now. He steps into the house and whispers her name. He starts upstairs and calls to her. She comes out and says the telephone is gone. She says she looked everywhere for it. She tells him she didn't see Quentin, but he assures her that he's there. The doors slam shut, and then Maggie opens them and asks them what they were doing, since they know they weren't supposed to go near the house. They tell her that the phone that was in her room is missing, and they never want to go into the house again. Amy asks if she can see Chris, and she agrees to drop her off on the way to the old house. 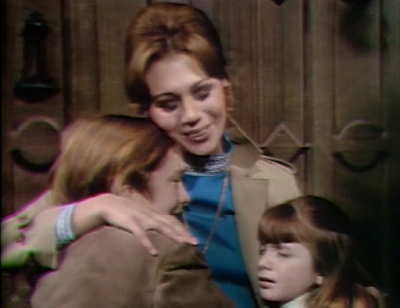 Chris reiterates to Carolyn that they can't see each other anymore. She tells him goodbye, and wishes him luck in finding someone he can talk to. Amy comes in as Carolyn leaves. She asks why Carolyn was crying, and he tells her that he made her unhappy. 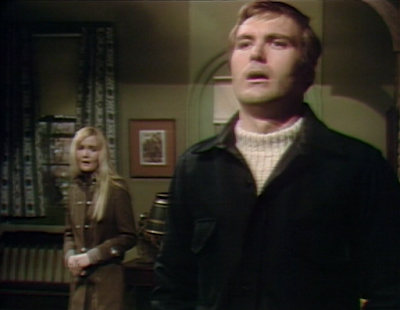 Barnabas continues to research Quentin, whose life was uneventful until he went to Europe. Barnabas adds that family histories aren't always accurate. He wonders if he chose David because of his younger brother, Jamison Collins. 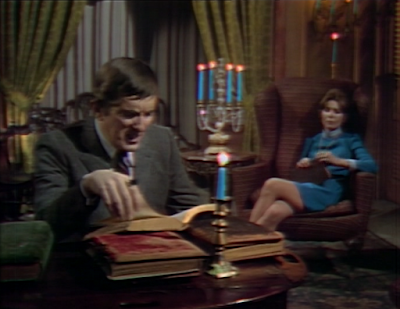 In his bedroom in the old house, David hears Quentin's music, and then a phone ringing. He sits up and sees the phone on a desk across the room. Amy comes into his room and says Beth woke her. She adds how pretty the music sounds. They both turn to the phone, which has stopped ringing. 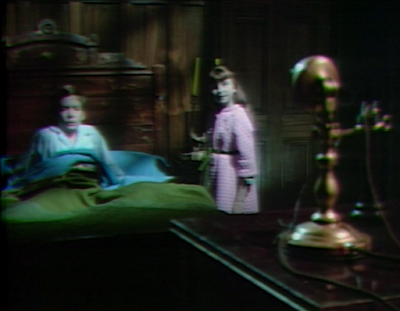 Maggie tells Barnabas that she thinks David was trying to fight Quentin, and that she believed him when he said he didn't ever want to return to Collinwood. She tells him she'll go check on the children before she goes to bed. Barnabas assures her that they'll determine what it's all about. He then realizes that he was trapped in his coffin for the entirety that Quentin lived.

Maggie checks in on David, and sees his bed is empty. She notices the phone on the desk. 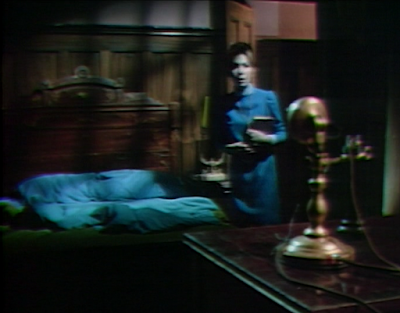 John: Julia found Beth's picture in an album a few days ago, and yet Barnabas says they haven't been able to find anything about her?

Christine: The picture didn't tell who she was, after all. David is possessed by an evil spirit, but the real horror is being expected to complete studies and take a history test while his family is in exile from the haunting.

John: Other than the fact that Quentin had the day off today, I'm curious why he can leave the main house, but can't enter the old house. If he were trapped in the house that would be one thing, but we've already established that he can wander about the estate.

Christine: Maybe he can't enter the Old House because Josette's ghost holds sway there. Poor Carolyn continues to be unlucky in love. Let's hope she doesn't rebound to Ned Stuart and completely screw up her life. 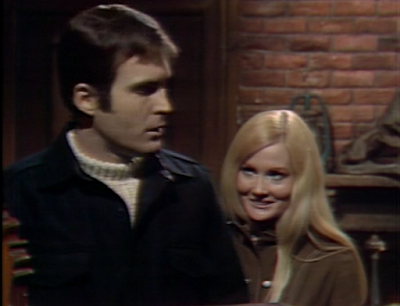 John: When are they going to learn that those darn kids aren't going to stay put unless they lock them in their rooms or chain them to their beds?

Christine: Maggie should be fired over this incident. Wasn't it her job to make sure the kids were so busy with their studies that they couldn't get up to mischief? Even if she were lax in her duties, I'd expect Liz, Roger or Stokes to do whatever possible to make sure the children weren't left unattended at any time.


**Note to Amazon Prime viewers that a portion of this episode was cut, likely due to inferior broadcast quality. After the scene with David and Amy staring at the ringing phone, Barnabas' conversation with Maggie where she tells him she thought David was trying to fight Quentin was completely excised. It can be seen on the DVD release.
Posted by John Scoleri at 6:00 AM