Quentin takes a drink. The constable comes in and arrests Quentin for murder. Quentin asks on what grounds, and the constable says it will all come out in the trial. He says that base don what he's heard, he might have a motive. Quentin asks to see Tad before he's taken in. He calls him into the drawing room. Tad comes downstairs and the constable leaves them. Tad asks if they found the man who killed his uncle. Quentin says they haven't but the constable is doing what he must do. He says he has to go away for a while, and ensures him that he's not responsible for Randall's death. Tad leaves, and Quentin asks to speak to Tad's governess. 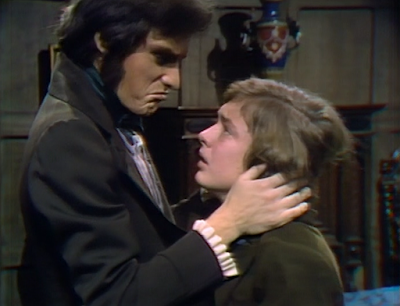 Tad tells Daniel not to let them take his father away. Daniel is troubled by the news.

Quentin is unable to find Daphne, and prepares to leave her a note.

Dawson arrives to see Gerard, and asks him why he murdered Randall. He says he just heard from Trask that he's dead. Gerard points out that Randall found the mask. Dawson says that in that case, he had good cause. Gerard says he did, but have cause, but he didn't murder him. Dawson points out the mark of the Devil was left with the body. Gerard says they apparently have a friend; someone outside their coven. Gerard says that soon Quentin will have no head, and he will be the head of Collinwood. 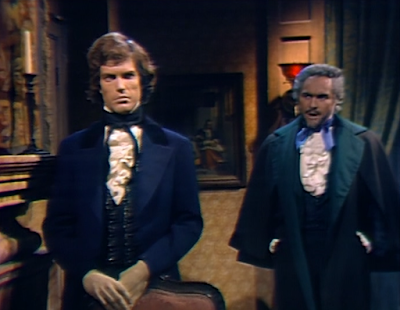 Daniel demands to speak to Quentin, and tells the constable to leave them alone. He tells Quentin he warned him about his strange fascination with the occult. He tells Quentin that he went to the top of his stairs and had a vision of him killing Lorna. Quentin says that someone has been filling his mind with evil distortions. Daniel asks if he had fought with Desmond. And he says he hated Grimes' cattle. Quentin reiterates his innocence. Daniel clutches his chest and falls to the ground. 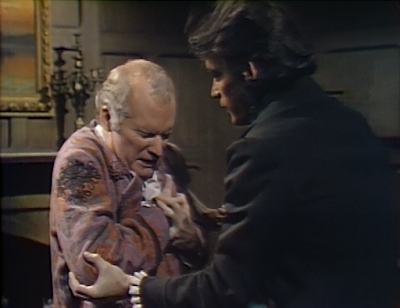 Dawson and Gerard arrive at Collinwood and hear Quentin calling. He asks them to help Daniel up. The constable and Dawson help Daniel upstairs. Gerard says he'll do what he can to help him. Quentin thanks him, and asks him to look after Daphne. He says he'll be more than happy. The constable returns and tells them that Dawson is making Daniel comfortable, and that Daniel asked to see Gerard. The constable tells Quentin that they have to go now, and Quentin follows him out. 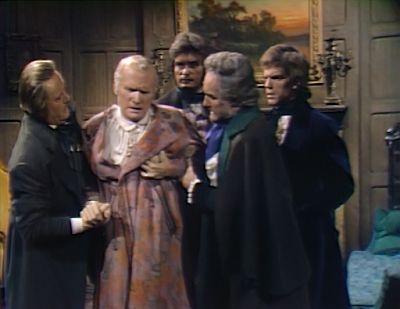 Gerard comes to see Daniel, and Dawson goes downstairs to wait. Daniel tells Gerard he wishes his sons, his son, turned out like Gerard. He asks for his help. He tells Gerard that he's dying, and will not live to see Quentin's trial. He says he feels that he must cut Quentin out of his will, but he says he must know the truth first. Gerard tells him that they will find the truth. 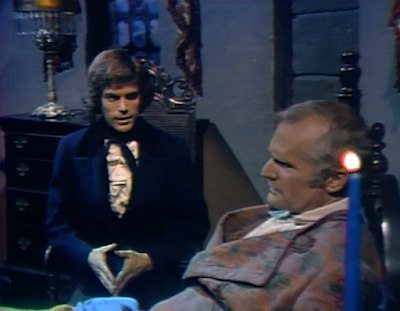 The arrive at the jail with Quentin. A woman, Grimes' daughter, unlocks the cell and Quentin steps in. She tells the constable that he's a witch. She says she's bringing in extra locks to put on the cell. He says he's not planning to escape, and when she sees the Devil's mark on his ring, she calls him a murderer. 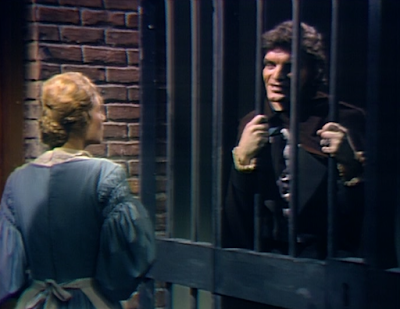 Gerard goes downstairs and tells Dawson that everything is splendid. He asks if he'd like to play a ghost. Dawson is confused. Gerard says they are going to hold a seance, and he needs him to play the part of Randall Drew. He explains that Daniel wants to know about Quentin's guilt or innocence.

Daniel tells Gerard he has reservations about holding a seance. They sit at the table with Dawson, and Gerard assures him that he is sure he will be pleased with the final results. They place their hands together, and Gerard begins the seance. Gerard calls to Randall. Dawson struggles, and Gerard says it's the spirit entering the body. He says his name is Randall Drew. Gerard asks the name, and Daniel interrupts saying that he doesn't want to know. 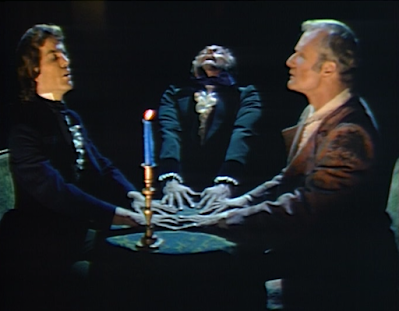 Gerard continues and asks for the name of Randall's murderer. Dawson says Quentin's name, and Daniel breaks down, crying. Gerard gets up and Daniel apologizes. He says he's always known the truth. Gerard apologizes, saying that he was expecting someone else. He says he now knows that he must choose a new heir. Gerard smiles. 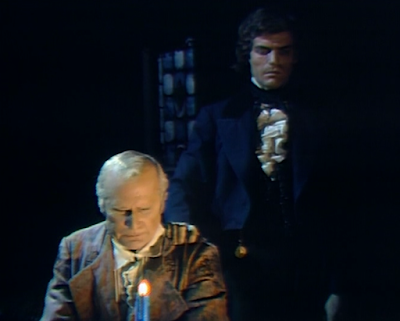 John: Quentin is an odd duck. He knows that he had a motive, knows that all the cards are stacked against him, and yet refuses to do anything to offer up a defense or alibi. He might as well be guilty! Of course, it's not like the witchcraft is going to stop if he gets beheaded...
Christine: It would have been prudent for him to stop wearing the ring with the Devil's Mark when Lorna Bell was discovered with it carved into her skull, but he definitely should have removed it once the mark was found next to Randall's body.
John: What's with Grimes' daughter working at the jail? I have a hunch that she's going to lead to further complications as far as Quentin is concerned.
Christine: She's not just Grimes' daughter, but the constable's wife, and she'll probably stir up quite a bit of trouble, otherwise she'd have no need to be there.
John: It's seance tracker time! Or is it? What's really different between what Gerard did and a real seance? I was actually hoping that Randall's spirit would really possess Dawson, and he would call out Gerard as Judah Zachery!
Christine: The difference is in the intent. He did not truly intend to call forth a spirit and it was a complete sham. I also hoped Randall would possess Dawson, just as Sarah Collins did Vicki after Carolyn tried to fake her presence during the séance in Episode 365. 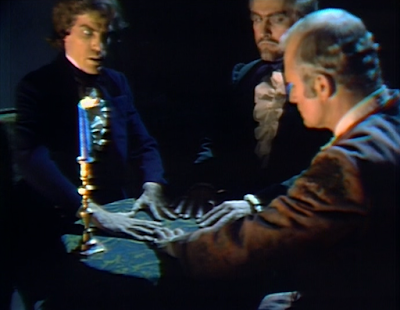