Downstairs in the basement of Trask's Memorial Chapel, Trask calls to Barnabas. When he doesn't answer, Trask wonders if he's already dead. Barnabas confirms he's not dead yet. Trask tells him that he could go on living if he was a vampire. Barnabas tells him to go away and let him die in peace. 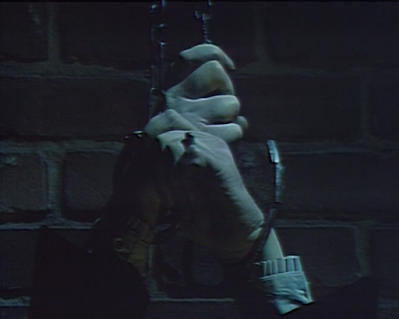 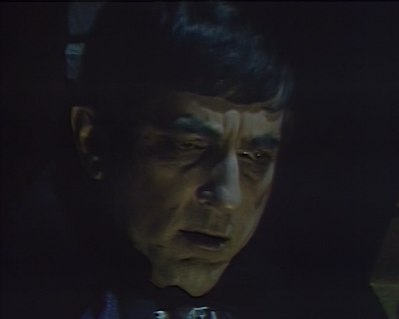 Gerard visits Quentin, who says Desmond is no more guilty than he is. Gerard says he should try and postpone the trial to get a new attorney. Quentin asks if there's any news about Barnabas, and Gerard just says that he's vanished.

Dawson reviews legal documents when Gerard comes to see him. Dawson says they need positive proof that Quentin is Zachery, and he says Gerard has it. He says they just need the head from Quentin's laboratory, and they're done. Gerard suggests that there must be another way. Gerard asks what he thinks they will do with the head when the trial is over. Dawson realizes that it would be destroyed. Trask comes in, and says if he were allowed to take the stand, the trial would soon be over. Dawson tells him that he can testify in the morning. Dawson excuses himself, and Gerard points out Trask isn't usually so cheerful. Trask tells him that Barnabas is dead. Gerard asks if he's sure, and how he knows. Trask says he can't say more. Gerard pushes him, but Trask tells him that his lips are sealed. 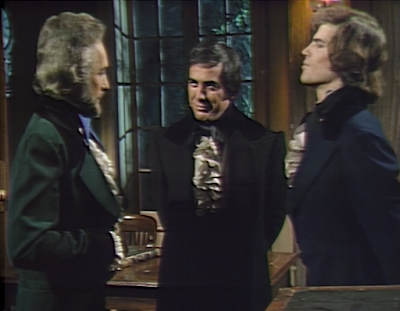 Gerard asks for a postponement until legal representation can be found. Dawson objects, saying that extra time to practice witchcraft. The judge offers him three hours to find representation. Or they will appoints Silas Graham. Quentin says the man is incompetent, and he'd be better served to represent himself. The judge tells him that he has until 1pm.

Gerard tells Quentin that three hours isn't enough time. He says he tried to find the right man for the case, but he couldn't find anyone. Quentin says if no one is willing to take his case, they must think he's guilty. Gerard tells him that he's not totally defenseless. He suggests that he defend himself. Quentin reminds him that he knows nothing of the law.

Gerard tells Dawson that Quentin is all his. He says Quentin will be quite ineffectual in court, so it's time for Dawson to go in for the kill. 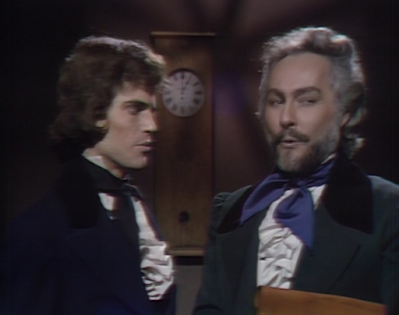 The trial resumes at 1pm. Dawson asks Quentin will be representing him. Quentin says that much to his regret, he will have to speak for himself. Dawson says it's impossible that Quentin was unable to find anyone to represent him. He says the fact that only his cousin, who awaits his own trial for witchcraft, was willing to defend him makes a strong statement about the case against him. Quentin suggests that Dawson's statements should be stricken from the record, and his objection is sustained. They ask Quentin if he might find representation in the near future. Quentin says he's not at liberty to say. 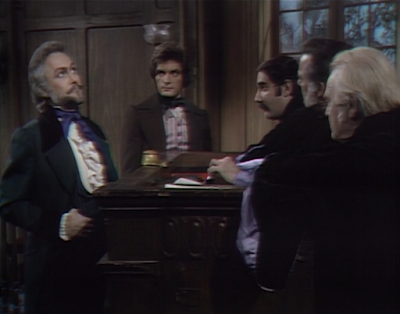 Dawson calls Trask to testify. After being sworn in, Dawson asks about Lorna Bell. Trask mentions how he last saw her alive, she mentioned planning to meet Quentin. He says when he next saw her, later that night, she was dead, and had the Devil's mark on her forehead. The same mark was on Quentin's ring. And also on Randall Drew's body. He says he found Quentin over Randall's dead body. He adds that Quentin's deceased father had a vision in which he saw Quentin murder Lorna. Quentin objects, but it is overruled. Trask says it was on Quentin's stairway into time. Dawson asks if Quentin has supernatural powers over time. Trask says he does not know. Dawson points out that the stairway is where Daniel saw the vision. 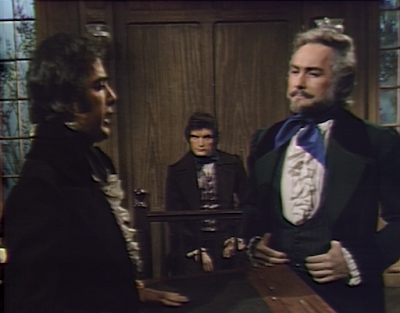 Dawson asks about what happened on the Grimes property. Trask says his cattle were stricken by a spell cast by Quentin. Quentin objects. Trasks says Quentin threatened Grimes. Quentin says he didn't threaten Grimes, but he will threaten Trask. Dawson asks how Trask knows of the threat. Trask says Grimes told him. Quentin objects. Trask says he didn't hear the threat, but Grimes wouldn't lie to him. The judge says that Grimes can testify for himself, and Dawson assures the court that he will. The judge asks Quentin if he would like to cross-examine Trask. Quentin says it would be best handled by his council. He clarifies that he has found a man to handle his case, and he requests a recess while they await his arrival. Dawson objects. Quentin suggests that he deserved representation. Before any more can be argued, Barnabas walks in and says that they need not wait any longer. 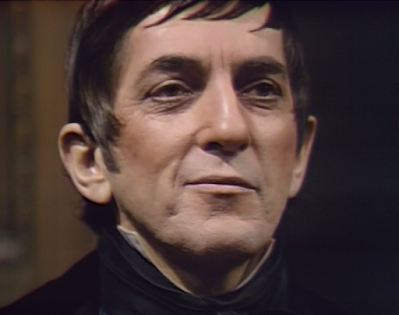 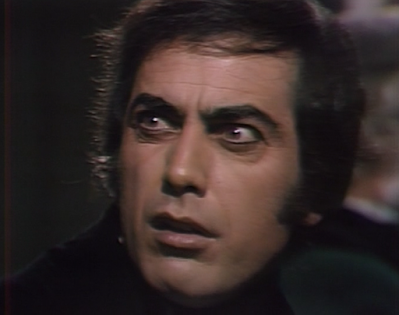 John: Where was Roxanne's ghost when Trask came to visit Barnabas? Do you supposed Julia and Angelique have been hanging out by Trask's chapel all day?
Christine: Julia and Angelique seemed determined to wait for a sign from Roxanne yesterday. Perhaps she finally found them, or they heard Trask taunting Barnabas, and broke down the wall when he left.
John: How was Quentin supposed to find alternative representation in three hours — from within the jail cell? You'd be hard pressed to do that in 2020 with a smartphone at your disposal, and he's supposed to figure it out in 1840?
Christine: I love how the judge advised him not to make the decision to represent himself in haste and then followed up by saying he had until 1 o'clock. I hope we'll find out how Quentin knew that Barnabas was on the way to help him.
John: Tomorrow should certainly be interesting! Considering how Barnabas was looking behind the brick wall just a few hours ago, I'd almost think that Angelique would have had to restore his vampire curse for him to suddenly appear so spry and chipper!
Christine: Yes, indeed! Let's hope for an exciting episode to conclude our last full year of the show!
Posted by John Scoleri at 6:00 AM