In the drawing room, Gerard plays a game of chess by himself. Gabriel walks in through the secret door and sneaks up on him. He karate-chops Gerard in the neck, knocking him out. He ties a rope around his neck and pulls it tight. He hears Leticia comes into the house, and he hides behind he curtains. Leticia comes in and sees Gerard, unconscious. She goes to the window but doesn't see anyone. Gabriel is just outside in the garden. Gerard gets up and asks when Leticia came in. He says she saved him. She says she thinks they left by the window. Gerard says they might have come in by the window, but they certainly didn't leave that way, noticing the secret door. He goes to explore the secret passage. Gabriel sneaks back in, and heads toward the stairs. 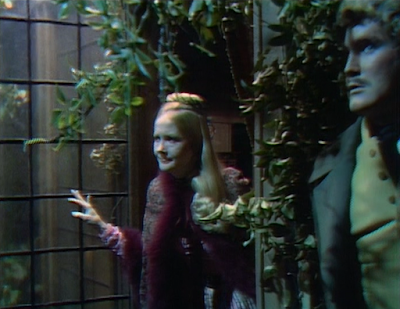 Gerard and Leticia explore the secret passage. She says it goes on a bit. He points out the staircase, and says there must be an exit somewhere. They continue to explore. 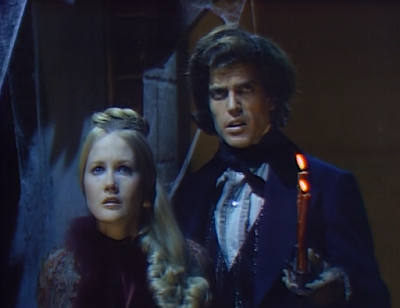 Carrie comes downstairs and sees Gabriel in his chair. He asks what she's looking at, and she asks how he got mud on his shoes. He says a servant dropped him in the mud when helping him out of the carriage, and then asks if she's satisfied. She says yes and leaves. He throws his blanket over them. 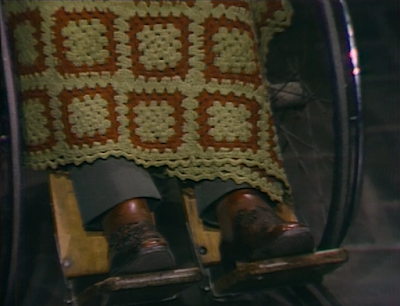 He wheels into the drawing room, when Gerard and Leticia come through the secret passage. Leticia tells him there's a murderer in the house. Gerard asks if Gabriel knew about the passage, and he says they played in there as children. He asks if that makes him a suspect. Gerard says he would be happy to accuse him if he walked. He wheels away, and Leticia tells him he's awfully calm considering there's a murderer about. He says he's not worried when the someone isn't him. He tells Gerard that he hopes he's not murdered in his sleep tonight. Gerard points out that they both know even Gabriel could do that. 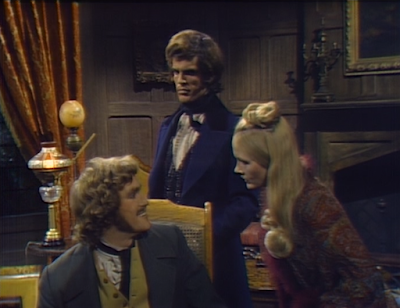 Gerard asks Leticia why she came to see him. She says Desmond asked her to give him a message. Quentin wants to see him, and he ignored Desmond's first message. Gerard says he was too busy, but he'll go see Quentin tomorrow.

In her room, Daphne brushes her hair.

Gabriel visits Quentin in jail. Gabriel says he's there to talk about the future of Collinwood and the entire family. He says Gerard isn't his friend. He says he's behind everything — the trial, the changing of the will, everything. Quentin says he has doubts about Gerard, and needs to talk to him. Gabriel tells him he doesn't think Tad will live to be 21 to inherit anything if Gerard is the master of Collinwood. 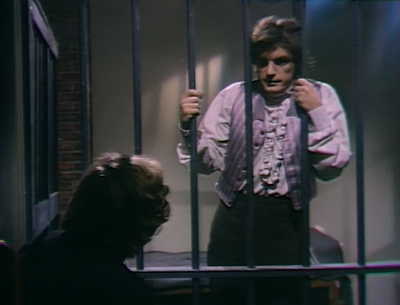 Carrie is drawing a portrait of Jeremy in the drawing room when Daphne comes in. She recognizes him. Carrie asks if she has met him, and Daphne says Tad told her about Jeremy. Carrie asks her not to say anything about him, because Jeremy's father hates the Collins family. Carrie asks what's going to happen to Quentin, and she says she doesn't know. 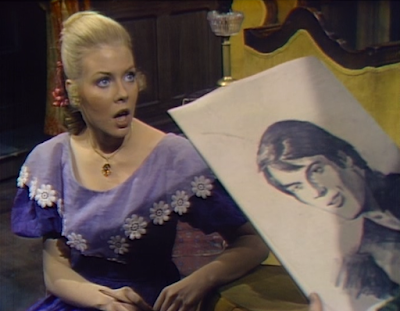 Gerard apologizes for not coming sooner, and Quentin says he's got some explaining to do. He asks how his friend Dawson came to be the prosecutor of his case, and why he's set on crucifying him. Gerard says he is no longer Dawson's friend, once he took the case. He says he begged him not to, but he refused. Quentin says he wants to believe him. Gerard asks if he has ever betrayed him. He says he's just serving as a caretaker until his innocence is established and he is set free. Quentin says he can't understand why Desmond and Barnabas are so much against him. Gerard says he doesn't understand it, either. Gerard says he and Quentin have a common enemy. He says he was attacked last night, but he didn't see who. He says they used the secret passage, so they knew the house quite well. Quentin wonders who at Collinwood would want to destroy him. Gerard asks who would want to destroy the master of the house. Quentin asks if he thinks the same person who put him in jail tried to kill him, and how they can't find out who it is. He asks if Daphne has received more letters. Gerard says she has. Quentin says the trouble started when he started getting letters from Joanna. He suggests that may be related. Gerard says he will find out. Quentin says he can then destroy the spirit. Gerard says he will find the source of the letters, and go from there. Quentin tells him to take care of Daphne, and himself. Gerard says that now that he has been alerted, no one will get rid of him. 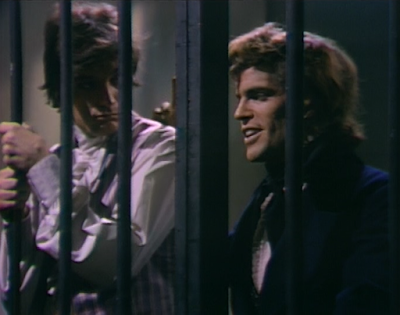 Daphne comes downstairs and smells Joanna's perfume. She then hears music playing in the drawing room. She goes into the drawing room, where Leticia is playing the piano for Carrie. She asks if anyone else was there, because she smelled a familiar perfume. Leticia sends Carrie upstairs and asks Daphne what's wrong. She asks Leticia to see if there's an unfriendly spirit in the house. Leticia says she doesn't feel any vibrations, but then says that something is happening. Daphne asks what. Leticia says she can feel the vibrations, and there is a foreign spirit in the house. They don't notice that Gerard had just come in through the front door. 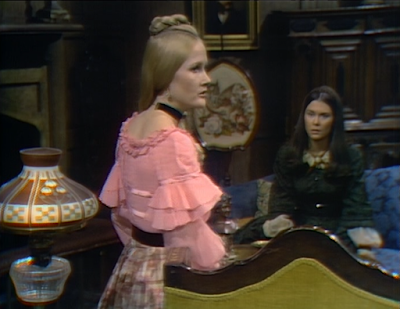 Gerard walks in and says that he overheard, and it's Joanna. Daphne excuses her self. She then calls from the foyer and says there was a letter on the table. It says I will come back tonight, and this time I will succeed. Gerard says no one will harm her. Leticia invites her to stay at Rose Cottage, but Daphne explains that she can't leave, because everyone will be out and she has to watch the kids. Gerard points out that whoever sent the note knew she was going to be alone tonight. He says that it's time to close out the mystery of Joanna Mills. 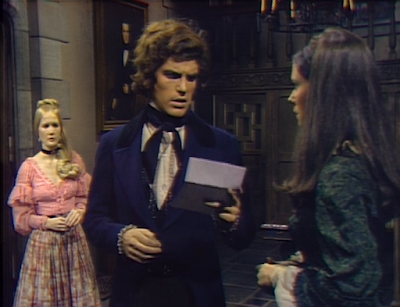 That night, someone in a hooded cloak sneaks into Daphne's room. It raises a knife and Greard throws back the blanket and grabs the person's wrist. He says, "My God! It's you — It's really you!" 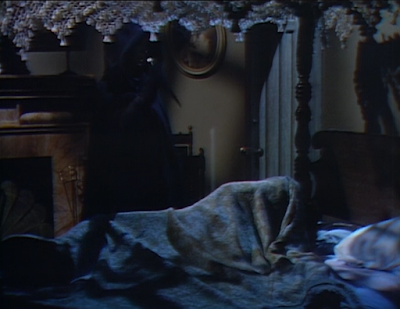 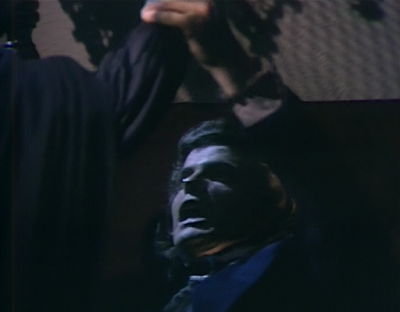 John: So Gerard completely ignores the one who just saved his life. She tells him she saw someone by the window, and that they must have left that way, so he decides they came in through the window, and left by way of the secret passage? And left it open? Perhaps Gabriel cut off the oxygen to Gerard's brain long enough to do some damage.
Christine: He must have been stunned, because when he was talking to Quentin, he acknowledged that the perp entered through the secret room. At least Gerard was positioned with his back to Gabriel today, which made it appear more convincing that he was unaware that Gabriel was sneaking up on him. Having his head land on the chessboard and scatter the pieces was a bonus. 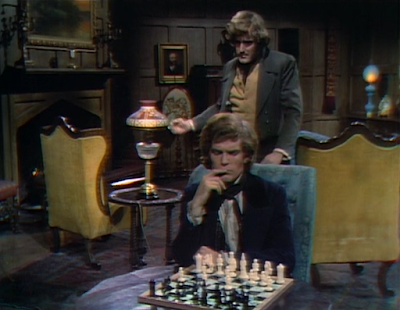 John: So Gerard basically said that Gabriel killed Daniel in front of Leticia, and she didn't even realize it. Funny that Gerard was too busy playing chess by himself to go see Quentin. And it's worth pointing out that if Joe Bob Briggs were reviewing this episode, he would be sure to point out 'gratuitous Kate Jackson hair-brushing.'
Christine: Little did we know that Carrie was such an artist! It was about time the show employed its resident sketch artist. 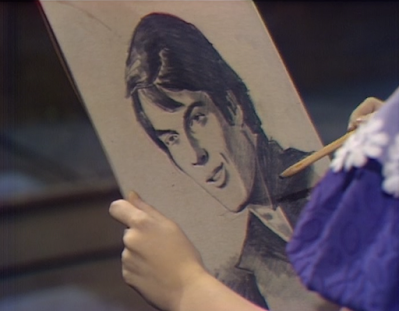 John: Ooh... quite the cliffhanger! With such a limited number of suspects to choose from, I'm going to go all-in and place my bet on Gabriel as the hooded killer. Charles Dawson might have been an interesting surprise, but he hasn't been around long enough to have delivered all of the Joanna notes, and let's face it, no one else has the motive that Gimpy Gabriel does...
Christine: I have to disagree. First, Gabriel has worked his hands to superhuman strength and Gerard would not have been able to hold off his knife wielding hand so easily. In addition, that hand is rather dainty and feminine. I would guess Samantha, except that wouldn't explain Gerard's shocked reaction, which leads me to believe that it really is Joanna. 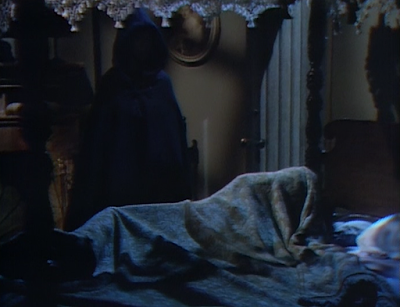