Gerard comes into the drawing room and asks Valerie if she feels alright. She says she does, and drops his watch fob. He asks where she found it, and she says it was on the floor. She says he probably lost it when the gypsy was reading his palm. He says he thought he lost it, and wouldn't know what to tell Quentin. She asks why, and he explains that Quentin gave it to him, which may explain her seeing a vision of Quentin in the fire. Gerard asks if he said something to upset her. She asks to confirm that Quentin gave him the watch, and he says he did when they were on the sea together. 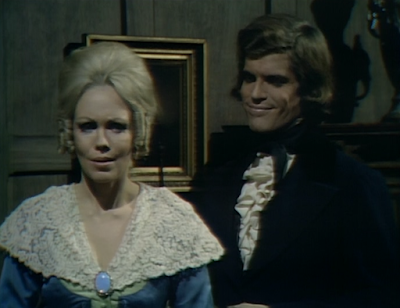 He brings up when he called her Miranda. He says he realized why he did that. He found a journal of a Judah Zachery that Desmond had, and a woman named Miranda was described, which Valerie resembled. She asks if the journal belonged to Desmond, and Gerard says Quentin may have bought it. She tells Gerard that she's glad they had a chance to talk, and thinks they will be good friends. He kisses he hand and bids her goodnight. Angelique is now convinced that Quentin is possessed by Zachery. She proudly thinks that she'll be responsible for the second beheading of Zachery. 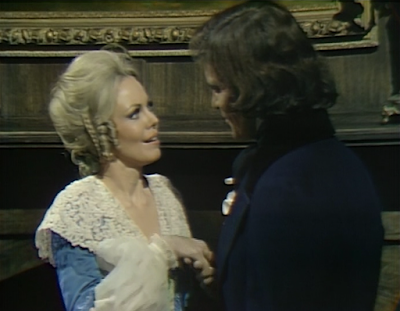 Gabriel tends to his father, thinking that he's the heir apparent. Daniel asks for some peace of mind. He asks why Gabriel is there, rather in church praying for the soul of his brother.

Barnabas arrives at Collinwood. Angelique asks if he's there to see his dear sister. He says they have nothing to say to one another after what she did to Roxanne and Julia. He says she's lucky she didn't succeed — he would have killed her if she had. She asks if he's that devoted to Julia, and he admits that he is. She's surprised that he continues to survive despite choosing such atrocious friends. She says he'll soon find out the truth about Quentin, and when he comes to her for begging for help, she won't give it. 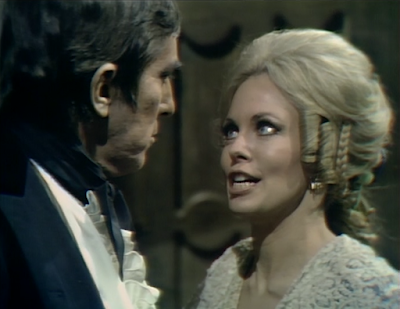 Barnabas is in the drawing room when Daphne walks in. She asks if he heard about Quentin, and he tells her that he's already seen him. He says he plans to talk to Daniel to try and convince him that Quentin is innocent. Daphne finds a letter on the ground, and asks if anyone else was in the room. He explains that Valerie was, and Daphne turns and runs out, holding the letter. Gerard watches from the top of the stairs as she leaves.

Daphne goes to the gazebo and reads the note. It says she has not heeded her warning, so she shall protect and watch over her. Gerard arrives and asks her what the letter says. She shows it to him, and says it means Joanna is in the house. Gerard says there must be an explanation, either natural or supernatural. He tells her not to share it with anyone, as it might be used against Quentin. He reminds her that he's the only one she can count on now that Quentin is gone. She says he's not gone. Gerard tells her that he can help her. He says she's the only one she can count on, and tells her Quentin told him to look after her. He kisses her. She pulls away and asks why she does the things she does when she's near him. She runs back to the house. 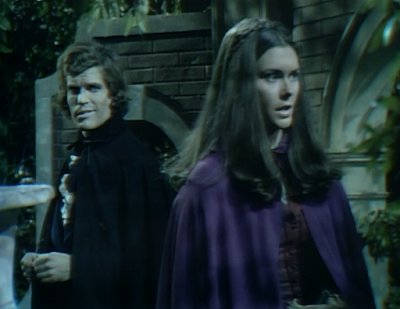 Gabriel receives a letter from Quentin. He assumes he's trying to get Daniel to change his mind. He decides not to give the letter to him. Barnabas comes downstairs and says he heard the messenger say there was a message from Daniel from Quentin. Barnabas offers to deliver it personally, and takes it from Gabriel. 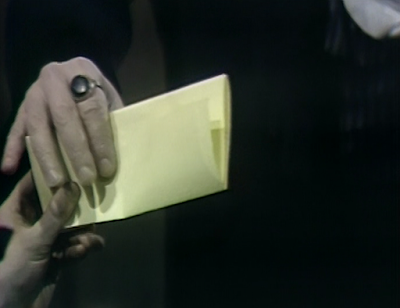 Barnabas thanks Daniel for letting him read the letter. He tells Daniel that it further convinces him of Quentin's innocence. Daniel says that there's a bit of a politician in Quentin. Barnabas urges Daniel to reconsider changing his will. He says he could not find a way to give Quentin the benefit of the doubt. Barnabas describes how he was moved by the way he spoke of Daniel. Daniel is surprised. Barnabas says he was counting on his father, above all others, to stand by him, believing him innocent until proven guilty. Daniel explains that he will think on it, but cannot make a decision at this time. 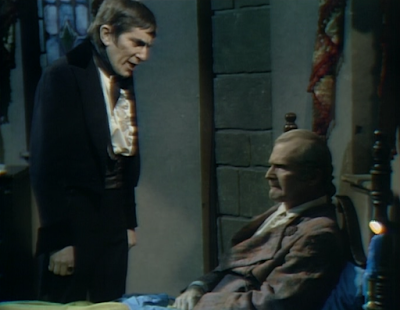 Returning to Collinwood, Daphne says that Gerard doesn't need to follow her in. She asks him if he smels perfume. He says he does. She says it's just what Joanna used to wear. Gerard asks if that might just have been someone wearing the same perfume. Daphne is shocked to find a purse and gloves that were Joanna's in the drawing room. Gerard asks whey Joanna wouldn't appear and tell her what she needed to know if she actually came back? He suggests that Daphne go upstairs to rest. She does, and he examines the purse and gloves. 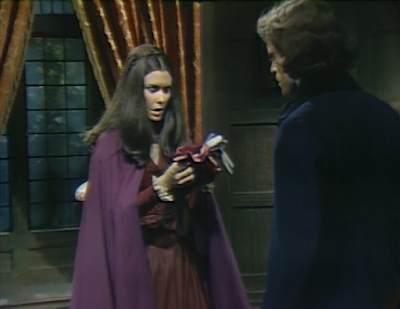 Gabriel wheels in and asks Gerard where he's been. He explains that Barnabas has been with Daniel for over an hour, and he took a letter from Quentin to him. He's concerned that Barnabas and Quentin will change Daniel's mind. Barnabas comes downstairs, and Gerard offers to go speak to Daniel. Gabriel calls Barnabas into the drawing room, and says that he should have taken his father the letter. Barnabas says he's not sure that he would have gotten it from his hand. He turns to leave, and Gabriel tells him there will be a new regime shortly, and he warns him that interference with family plans will not be tolerated. 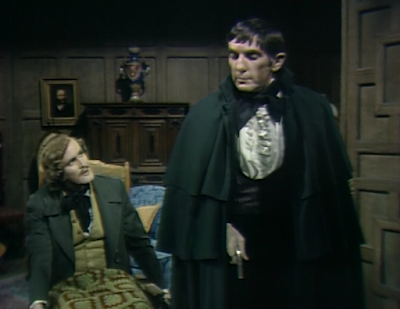 Gerard comes downstairs, and tells Gabriel that all he could get out of Daniel is that he plans to see Desmond in the morning. He says it's clear that Daniel intends to revise the will once again.

Daniel works on the will when Gabriel wheels in. He accuses his father of changing his will again. He demands that he give him the pen. Daniel calls him an ungrateful wretch. Gabriel complains that he was always second to Quentin. Daniel says Quentin is ten times the man that Gabriel is. He says that if Quentin had been the one to have the accident, he would have willed himself to walk, rather than wallowing is self pity. Gabriel stands up and tells him that's enough. He walks to his father, and Daniel can't believe it. Gabriel explains that he's been able to walk for years, and waiting to get back at Quentin. He says that he killed Randall, and Quentin is going to pay for it. He grabs the will, and Daniel falls to the ground. 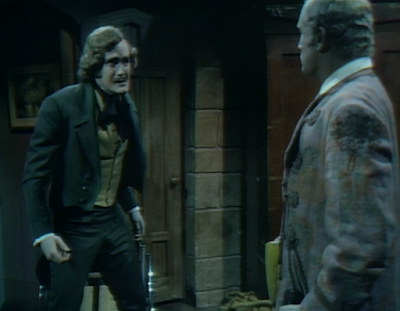 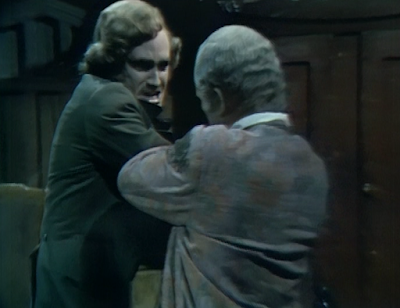 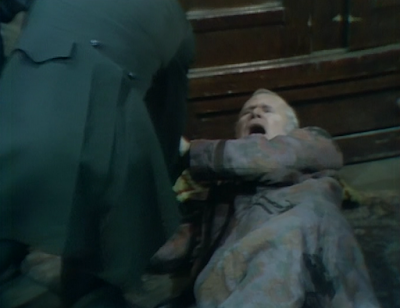 John: Well that was awkward. After the setup of Quentin as the embodiment of Zachery, I thought that Gerard's revelation that the watch fob came from Quentin might explain why she saw his face instead of Gerard. But instead, it looks like Gerard was doubling down with the journal mention, and managed to successfully convince Angelique that Quentin truly is possessed by Zachery. I thought she was smarter than that...
Christine: She is smarter than that, which leaves me feeling extremely irritated with the writers. It doesn't make much sense that Judah would possess Quentin so he could get himself beheaded again. Hopefully she'll realize her error sooner rather than later so we can have a good old fashioned witch duel.
John: So... do you think Joanna smells of lilacs, like Daphne's ghost, or jasmine, like Josette's? Or perhaps seaweed, like Bill Malloy's?
Christine: No doubt she comes up smelling like roses. Barnabas returns to express his undeniable devotion to Julia after being absent for 10 episodes, and you're talking about the smell of Joanna's ghost?
John: I knew it! Of course, it's somewhat ridiculous to think that Gabriel has been able to walk for years, and just continued to roll around in the wheelchair in some sort of long-game charade, as if he was waiting for just the right moment to get his revenge on his brother... when he's accused of witchcraft?
Christine: I think he was faking disability so he could continue to work on Quentin's guilt for being responsible for it. Still, the dramatic tossing of the quilt as he shocked his father by standing was well played. 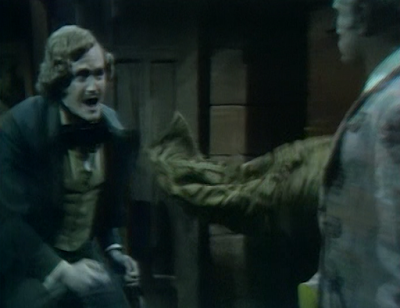