Desmond returns with the will. Gabriel demands that Desmond open and read it. Gabriel asks everyone to sit down. Gabriel opens the envelope, and begins reading the will. Gabriel asks who 'gets' it, and Desmond's only words are, "Oh my God." Gabriel smiles, gleefully, boasting that he will be his father's heir. Desmond reads that Daniel's father's timepiece will be bequeathed to Quentin. Samantha is upset that she's not getting more. Desmond continues saying that the heir noted below will act as unofficial guardian of Tad, who, if living at Collinwood at age 21, will receive the entire estate. He adds that Tad and his mother will always have a place in Collinwood, and receive room and board and a weekly stipend set by the heir. Gabriel points out that she should be thankful to get that. Desmond continues to say that if Samantha removes Tad, they will forfeit everything. He closes by saying that until Tad comes of age, he leaves everything to his son, the man he has come to love as a son, Gerard Stiles. 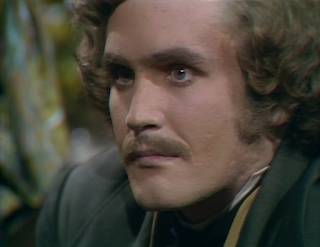 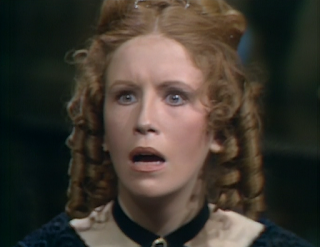 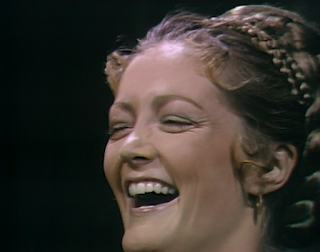 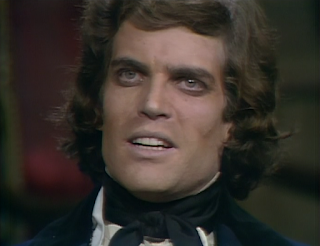 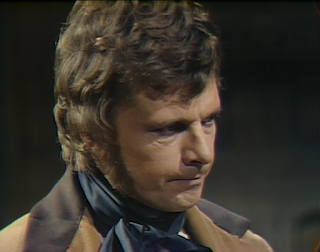 Gabriel and Samantha are both shocked. She accuses him of planning this all along. Edith laughs. Gerard appears to be surprised. Samantha asks Gerard if Tad will even live to see 21, and runs off. Gabriel says Gerard told him he was the heir. He asks Desmond if he gets anything. Desmond says that Gerard will ensure Gabriel and his family will always have a home at Collinwood, and an allowance commensurate with his needs. Gerard says he had nothing to do with it. Gabriel says he knew Gerard wanted something, he just didn't know the scope of his ambition. Desmond adds that if Quentin is proven innocent, everything will be returned to him. Gerard says that he's happy Daniel wrote that. Gabriel says all Gerard has to do is ensure Quentin is found guilty. He says he won't accept the will, and starts to stand. He sits back down. Gabriel points out that he almost walked. 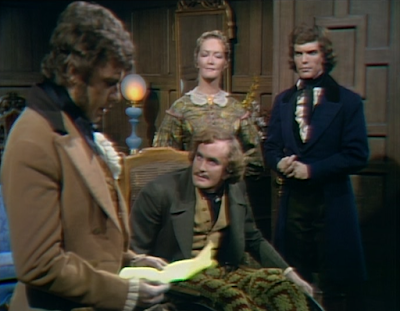 Desmond tells Samantha he has great hopes of Quentin being proven innocent. She says he doesn't stand a chance. Desmond reminds her that he's being tried for murder — not witchcraft. She complains about Gerard, and he reminds her that she agreed to marry him once. She says they won't leave the house, and Tad's life will be in danger. Desmond says he won't be in danger as long as Quentin is alive. He tells her to rid herself of her hate of him. 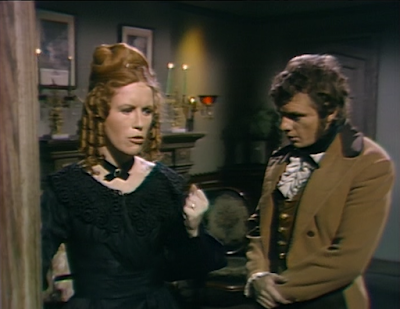 Dawson arrives at Collinwood and asks Gerard if congratulations are in order. Gerard shushes him, and says so far all he has inherited is a kingdom full of vicious rebels. He says they must go to the village, and offers to take his carriage. Gabriel rolls in and tells him as the new master of Collinwood, he should take the new carriage. Dawson extends his sympathies, and Gabriel tells him that he knows where his sympathies lie. Gerard says he's going to tell Quentin the good news. 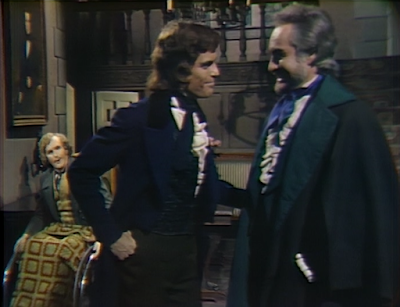 Gerard and Dawson arrive at the jail, and he asks to be let in the cell with Quentin. Mrs. Ward allows it. Quentin asks if he'll be able to attend his father's funeral. Gerard tells him that there is more disquieting news. Gabriel forced Desmond to read the will. Quentin says he doesn't mind. Gerard says if he's proven innocent, everything will revert to him. Quentin points out that in the meantime, Tad will have to live with Gabriel lording it over him that he is the master of Collinwood. Gerard interrupts him to explain that Gabriel didn't get anything. He says that he did. Quentin is surprised. Gerard says Daniel didn't trust Gabriel with the money, and he will merely administer it until Quentin is free. He asks if Quentin trusts him, and he says he does. Quentin says that someone is doing this to him. He says at least in jail, he can't be held responsible for any more killings. 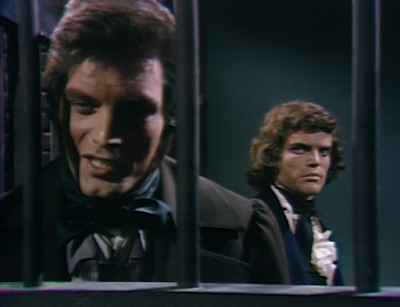 Edith teases Gabriel. He threatens to kill her. She tells him he has nothing to give, and she's glad that she did what she did. Gerard returns, and she taunts Gabriel with that. Gerard tells him that he wishes his thoughts were as kind as Quentin's. Gabriel rolls away, and Gerard sends Edith away. He tells Charles to help himself to anything in the house, as it's all his now. Charles says that it is, for now. Gabriel suggests that if Quentin is tried for witchcraft, he could be found guilty. He says that Quentin pointed out that he couldn't kill anyone while in jail, and Charles suggests Mrs. Ward, and pulls out her scarf. He says he grabbed it just in case... 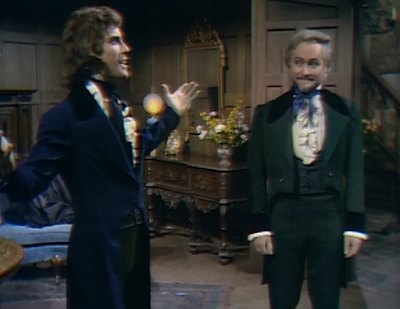 Quentin tells Desmond that he won't declare his father insane in order to get the will tossed out.

Gerard tells Edith that tonight, she will help them.

Mrs. Ward tells Quentin not to look at her as she takes his uneaten food.

Gerard performs a ritual, saying that Mrs. Ward's scarf is the Devil's noose. He puts the scarf around Edith's neck and pulls it tight. 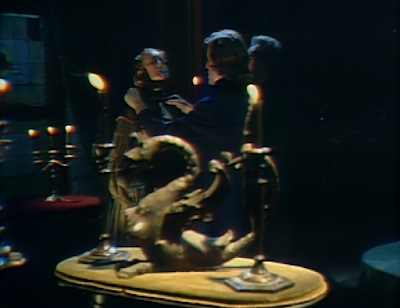 Mrs. Ward feels something around her neck, and accuses Quentin.

Mrs. Ward begs Quentin to stop. She collapses to the ground. 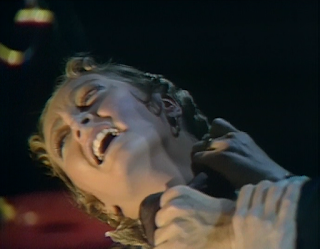 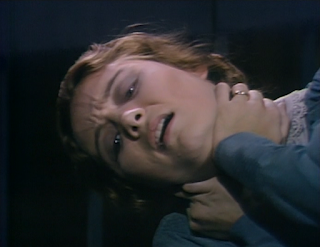 Quentin tries to revive Mrs. Ward, but realizes that she is dead. 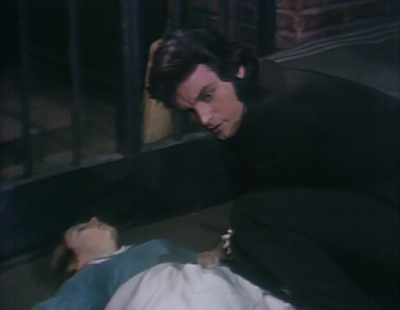 John: No real surprise for us at the reading of the will, but plenty of surprises for the rest of Collinwood! It was kind of funny that Samantha was probably as upset about the results as Gabriel was. You'd think she'd be better off with Gerard in control than Gabriel.
Christine: With Barnabas and Julia constantly away on break, it seems there will be no chance to change future events at Collinwood. Since we know Tad and Carrie became ghosts as kids, it's seems clear that Quentin will be found guilty, and Gerard will need to get them out of the way to claim the Collins fortune. It remains to be seen what role Daphne will play, and where the zombie pirates will originate.
John: After all this time, I find it hard to believe that Gabriel might 'accidentally' start to stand up in front of everyone. Of course, they all let the issue drop no sooner than it happens, so it appears that his secret is still safe — for now...
Christine: He was angry enough to jump out of his seat when he found out Daniel was reinstating Quentin as his heir, so it's not too farfetched to believe he could be angry enough to stand up and want to throttle Gerard.
John: I'm sorry, but that black scarf didn't come close to matching Mrs. Ward's wardrobe. I think it would have been funny if Charles and Gerard's ritual ended up choking out some innocent bystander who happened to leave their scarf in the jail!
Christine: I was wondering why Gerardudah had to use Edith for his choke spell when clay or cloth figures have been the standard up until now, and why Dawson had to be present for that ceremony since he had no involvement. That was weird.