Leticia runs into Rose Cottage and tells Flora that she was chased by a crowd calling her a witch. Flora says perhaps Daniel's death was a kindness, when Desmond returns. He says Quentin will not be tried for Randall's murder. The women smile until Desmond adds that he's going to be tried for witchcraft. Flora says it's ridiculous, and Desmond says that an old statute on the books allows it. He says the difficult thing is Quentin's stairway to time. And the voodoo doll that belonged to Quentin. Flora says that Desmond might have died if Trask and Gerard hadn't removed the scarf from the doll's neck. Desmond says he doesn't think it's any coincidence that Gerard was the one to do that. He points out that Gerard stands to gain if Quentin is beheaded. Flora doesn't believe it. She's sure that someone else must be scheming against Quentin. She leaves, and Desmond asks if Leticia agrees with Flora. She says Gerard can be dangerous to his enemies. She asks if Gerard dabbled in witchcraft when she first met him. She says he was fascinated by her, she thought because she was pretty, but he wanted to know how to read minds. Desmond tells her that she is pretty. Leticia tells Desmond that she'll help him. He leans in to kiss her. 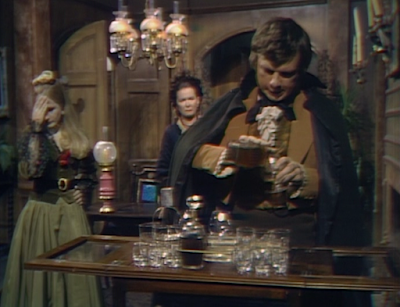 Flora, Carrie, Leticia and Desmond are leaving Daniel's service when Carrie sees someone watching them from the woods. 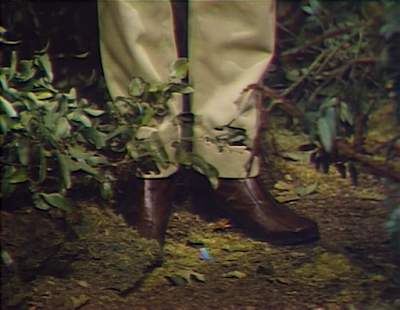 Back at Rose Cottage, Flora asks Desmond if he's doing the right thing serving as Quentin's attorney. She asks him what will happen if someone were to accuse him next, and Desmond tells her she must never mention the head he brought back from Asia, as it's said to have magical powers. He says if they find out that he did have it, he could be linked to witchcraft. 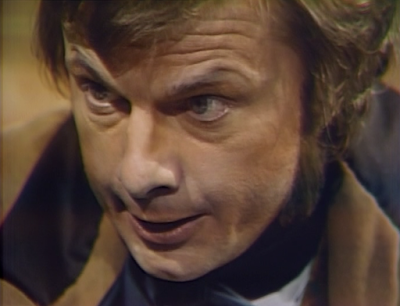 Carrie is walking back to Collinwood when she runs into a stranger. He knows her name, and tells her not to be frightened. He describes who she is and who her parents are before introducing himself as Jeremy Grimes. She says that Quentin is not a warlock, and he tells her that he's ashamed of his father's beliefs. She realizes that it was he who was watching them after the service. She asks why he lives with his father if he feels the way that he does. She starts to go, and he offers to walk her home. He says he'll take the chance of being seen with her. 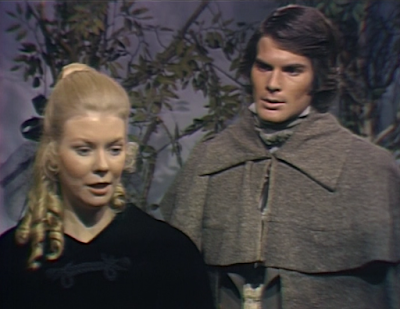 Leticia tells Flora that she needs to work to get her mind off of Quentin. She says work means thinking about vampires. Leticia reads her an article from 1797 about strange attacks in Collinsport, where the victims had two bites on their neck. Flora says that whoever attacked Roxanne could have been alive in 1797. Flora tells Leticia to go to Collinwood and bring her back family diaries from the period. She says that if there's a vampire in their midst, she needs to know who it is. 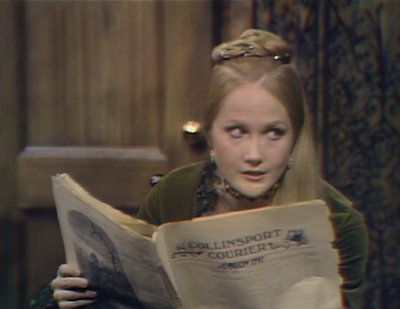 Jeremy tells Carrie he plans to get a job so he can afford to go back to school. He suggests that they could meet again, and when she turns away, he tells her that he understands. She points out that she's never asked to be courted before, and agrees to meet him again, before retiring into Collinwood, smitten with him. 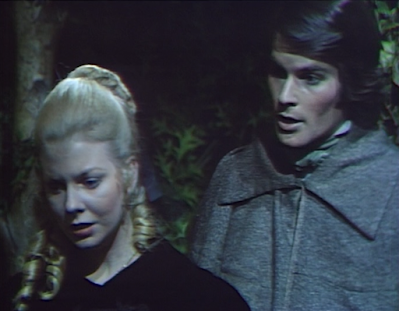 Barnabas is shocked to hear Quentin is being charged with witchcraft. He asks what's the most incriminating evidence against him. Desmond says Trask saw him leave the chapel with Lorna, and he has no alibi after that. Barnabas says they need to find the proof that Gerard is behind the effort to convict Quentin. 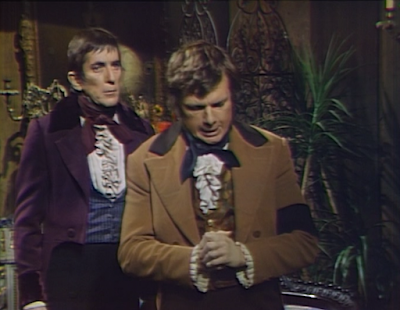 Leticia arrives at Collinwood, and Carrie asks her if she knows what it's like to be in love. Leticia hugs her and congratulates her for growing up. She says she doesn't need her second sight to know that Carrie met someone. Carrie asks for her palm to be read, and Leticia looks alarmed and says she'll be very happy. Carrie asks if she saw her and Tad dead, like she saw in the crystal ball... 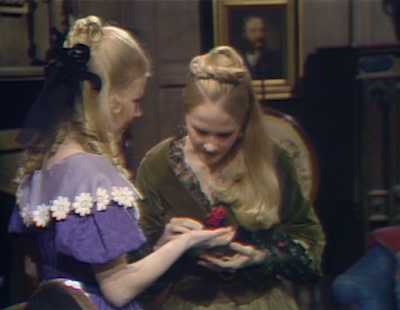 Flora tells Barnabas that she was shocked he didn't attend Daniel's funeral. He explains that he couldn't. She tells him that she's writing a book on vampires, and she has a theory that there's a vampire in Collinsport. She says she found out there were similar attacks in Collinsport in 1797. Leticia arrives with the books Flora requested, and Flora realizes that they can find out who the vampire is through a seance! Flora tells Barnabas that Leticia is a brilliant medium. Barnabas tries to discourage her, but Leticia is willing. Flora tells Barnabas that he needn't stay if he's offended, and he agrees to participate. They sit down at the table and Leticia starts the seance. She calls for Roxanne to come to them. The doors swing open, and they hear Roxanne's voice. She appears as a ghost. She says she has no rest. Leticia asks if she'll tell them who made her a vampire, and she says yes. Barnabas is mildly alarmed... 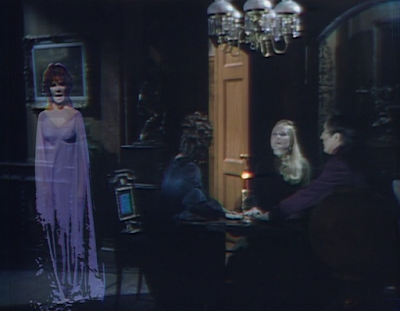 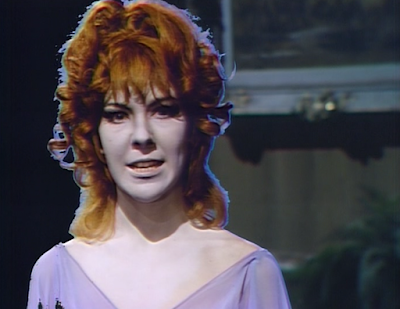 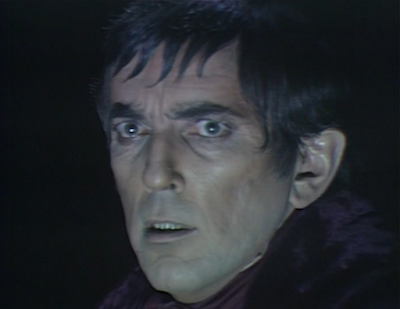 John:  Do you think Desmond has ever stopped to think that everything went to hell when he brought the head home with him? And isn't he the least bit concerned that he doesn't know the whereabouts of said head?
Christine: He seemed confused about whether he still had it or not. Do you think Leticia was being shy or could Desmond have a problem with halitosis? Perhaps she was repelled by knowing he is clearly doomed, as evidenced by his insistence to Flora that he will be alright.
John: So Flora needed to get a history lesson before she considered that the vampire responsible for Roxanne might still be out and about? I thought she was flighty before, but come on!
Christine: I think the Collinsport Courier research was to establish a connection between Barnabas of 1797, who was reported to have traveled to England in the Collins family history books, and the current Barnabas who claims to be from England. Do you know what is scarier than vampires? Star-crossed teen romance! Look out, Jonathan Frid! Tiger Beat has a new cover boy! With the way Leticia dropped Carrie's palm reading, she may not live to get her first kiss from Jeremy. 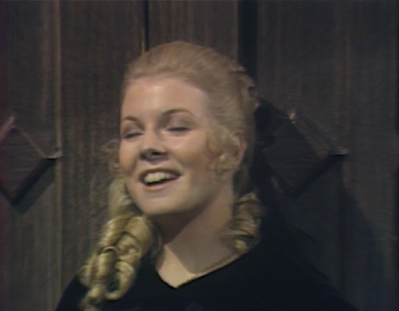 John: Another seance? Already? BOOM! Break out the seance tracker again. I think this one may have set a record for the fastest time from a seance being brought up to it being underway! And we got the requisite doors swinging open, even though the guest materialized in the room this time, rather than standing in the shadows waiting for the next episode to have their identity revealed.
Christine: Instead, we have to wait until tomorrow's episode to see if Barnabas is going to get called out for being a vampire, though it's unlikely she'll get the chance to point the accusatory finger at him. 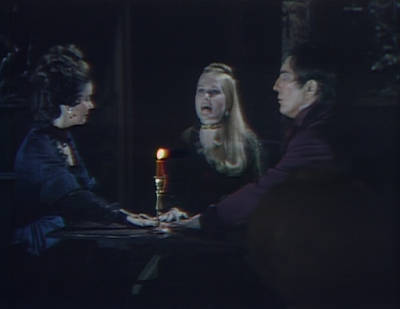 Episode 1070: Barnabas conducts; Julia and Professor Stokes participate; Carolyn speaks through Julia, providing the same six clues she wrote down before she died that portend the destruction of Collinwood, but is interrupted by the presence of Gerard before she can explain what they mean; held in the drawing room at the Old House in 1995
Episode 1079: David conducts; Hallie participates; a ghostly voice that sounds like David's repeatedly says, "Let us live!"; held in the Playroom at Collinwood in 1970
Episode 1126: Gerard conducts; Flora and Lamar Trask participate; the ghost of Reverend Trask informs them they are surrounded by evil and tells them to beware the cross; held in Rose Cottage in 1840
Episode 1150: Quentin conducts; Daphne participates; Joanna Mills is summoned and a hooded figure appears; held in the drawing room at Collinwood in 1840
Episode 1157: Gerard conducts; Charles Dawson and Daniel Collins participate; Dawson pretends that Randall Drew is speaking through him, and claims he was murdered by Quentin Collins; held in the drawing room at Collinwood in 1840
Episode 1163: Leticia conducts; Flora Collins and Barnabas participate; Leticia calls on the spirit of Roxanne to give the identity of the vampire who created her; held at Rose Cottage in 1840
Posted by John Scoleri at 6:00 AM