Gerard arrives at the old house. He forces his way in and points a gun at her. He tells her not to play innocent. He says she knows what he's going to do and tells her to leave the house because it won't be pleasant. He goes to the bookcase and searches for a lever to open it. Barnabas appears and asks if he's looking for a book. Gerard is shocked to see him in the daylight. Barnabas offers to help him find the book he's looking for. Barnabas asks him what's wrong. Gerard says he's standing in front of him in broad daylight. Barnabas asks him what's so unusual about that, and Gerard says what's unusual is vampirism. Barnabas asks him why he thinks he's a vampire. Gerard says he knows his answer to that. Barnabas explains that vampires cannot survive during the daytime, or see their reflection in a mirror. Gerard says that he obviously has assistance form someone. Barnabas says of course he has, adding that he's had someone nearby offering a kind hand. Valerie walks in and offers Gerard a drink. Gerard tells them to enjoy it while they can, and leaves. 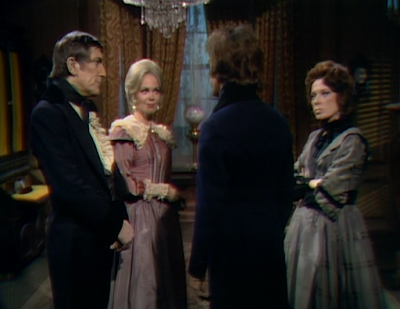 After he's gone, Barnabas asks Angelique what she wants in return for helping him. She says she expects nothing. For once in her life, she says there is no price. Julia says she's never done anything for nothing. Angelique says she did what she did because she loves Barnabas. Julia turns in a huff, saying she doesn't believe her. Barnabas asks Julia to allow him to speak to Angelique alone, and she says of course, since they are husband and wife. He thanks her for warning him about Gerard, adding that right now he would be dead in his coffin forever. Julia says he would have had to kill her first, and he says in that case, Angelique saved them both. Julia asks him for what... saved them for what, and storms off. 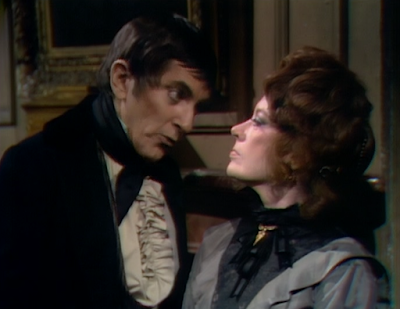 Barnabas tells Angelique that she can pretend in front of Julia, but they know each other too well for lies. He asks the price for her saving his life. She says there is none, and she understands him not believing her. She says she only has herself to blame. He says she is extraordinary. He points out that he's seen her play this scene so many times before, but he confesses that he's never been so convinced. She tells him that it's the truth — she loves him. He tells her to spare him the charade, saying she only wants power over him. She says she has no hold over him now that she lifted the curse. She says she would rather see him free of her than dead. She admits she gave him reasons to despise her, but nothing she has done has given her his love. He says that they can no more love at will than they can prevent their love. She says she knows that well, and is why she asks for nothing he can't give her willingly. She asks that he try loving her. He says he almost feels like an ordinary man, and she's an ordinary woman. She says he is an ordinary man now, and he asks, "forever?" She pauses, silent, and then says she swears it will be forever. She asks him to hold her. She says she's afraid of losing him now that he's human, and can die. She asks him to hold her. He does. She asks if he believes her now, and he says he does. He says he cannot say he loves her now, but for the first time since her arrival from Martinique, he understands her love. She asks if that makes any difference, and he says he doesn't know. 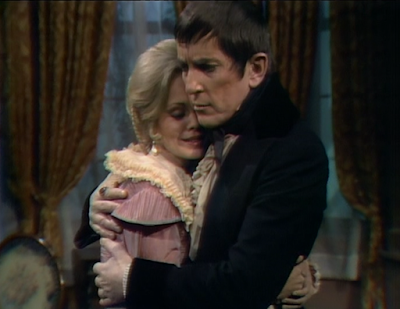 At Collinwood, Julia tells Barnabas it's madness to believe Angelique. She tells him not to trust her, and he says he must. She says it's a mistake, and Angelique will use her power against him again. She says she cares for him too much.. and then dials back, saying he's her good friend and she doesn't want to lose him. He tells her that he's human now, and wants to take a walk in the sun. 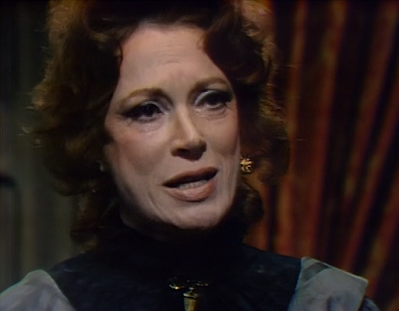 He leaves, and she starts upstairs, running into Gerard. He points out she had quite a night with Valerie. He asks her when she last saw her brother Barnabas in the daylight. She says just now, and before that, earlier in the day, which he should also remember. She then adds yesterday and the day before. He says she's the only one who has. He takes her to the portrait and asks who it is. She says Barnabas. He asks which one, and she replies, "the father." Gerard questions, "the father?" Julia laughs it off and says it's her father. Gerard says he thinks there's only one Barnabas Collins. She says she understands he thinks Barnabas is a vampire, and as a doctor, says she's concerned about him. She assures him that Barnabas is all-too human. She excuses herself and goes upstairs. 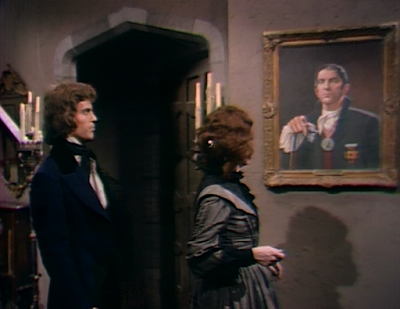 Gerard goes into the drawing room and takes a drink. Gabriel wheels in and asks for his check. Gerard tosses it to him, and Gabriel points out it's only half his allowance. Gerard explains that it's all he's getting until the trial is over, since it's causing the family a fortune. Gabriel demands his allowance, and Gerard walks out on him, calling him a boor. Gabriel wheels to the fire and throws the check in, but misses. He hears laughter which he thinks is his father, and he asks why he has come back. 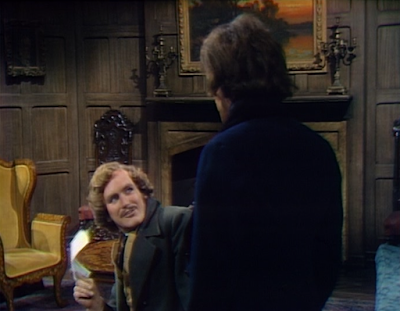 Barnabas returns to the old house and regales Angelique with talk of the beauty of daylight. She asks if he's happy, and he says he's like a child, waiting for the morning. She says she's glad. He asks what she's doing, and she says she's replying to Charles Dawson, who has asked her to testify against Quentin. She says she's going to do it. Barnabas says that he won't allow it, because Quentin is innocent. Angelique tells him that Quentin is evil — possessed by the spirit of Judah Zachery. He asks her how she knows Zachery. She points out that as long as he has known her, he never knew who made her as she is. He's shocked. She says it was in 1692, long before she met Barnabas. She said she loathed Zachery from the moment she met him, but she was drawn to his spell and made a member of his coven. She says that Amadeus Collins, Barnabas' great uncle was a judge who tried and convicted him for witchcraft, and had him beheaded. She explains that she testified against him, and if she hadn't, they would have beheaded her as well. She says Zachery vowed revenge on her and the Collins family. Barnabas realizes that she's Miranda from the newspaper articles. She tells him that she was exiled to the West Indies, where she met Josette. 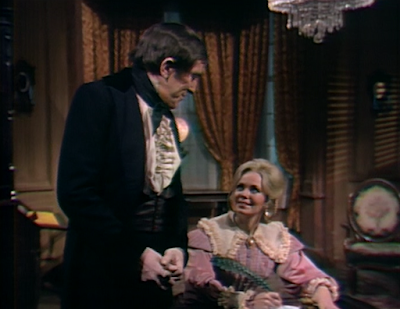 Barnabas asks why she thinks Quentin is possessed. She says it started when Gerard referred to her as Miranda. She thought only Judah would know that. Barnabas points out how that would make Gerard the suspect, not Quentin. She says she saw a vision of Amadeus. She suspected Gerard, and conjured an image of Zachery now, and saw Quentin's face. Barnabas says that Gerard is surely possessed by Zachery. He says that all of her strange experiences have been made by Judah acting as Gerard. She asks why he is so sure. He says that he came from the 20th Century, where Gerard is an evil spirit possessing two children, David Collins and Hallie Stokes. He says that he will murder Quentin if they don't stop him, and go on to destroy Collinwood. She realizes that if it's true, Zachery will continue to exist. Barnabas tells her she must refuse to testify against Quentin, and she agrees. He says that if anyone is a threat to them, it is Gerard Stiles. 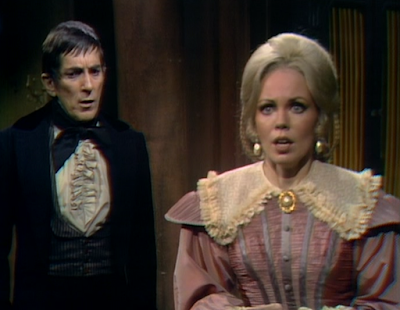 Gabriel thanks Julia for giving him a drink. She says he was pale as a ghost. He suggests that she dislikes Gerard as much as he does. She asks why he thinks that. He says she either hates him, or is terrified of him. Gabriel says he is a loathsome pig. He says Gerard knows he is going to break his father's will. Gabriel hears his father's voice saying, "DO NOT TRY," and he wheels out of the room. Julia wonders what is terrifying Gabriel. She goes outside. 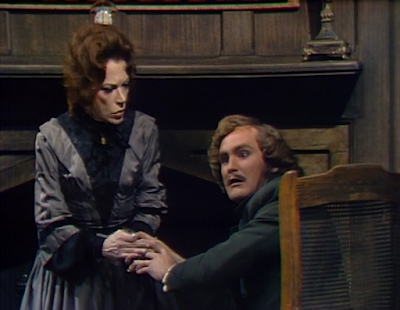 Gabriel lights a lamp in his room, and the window blows open. He asks his father to leave him alone. Daniel's ghost appears and says that Gabriel murdered him. Gabriel blames Gerard for goading him into killing him. Daniel yells at him, calling him a liar. He says he will do as Gabriel did to him, and disappears. Gabriel says he will ensure Gerard never hurts him again. 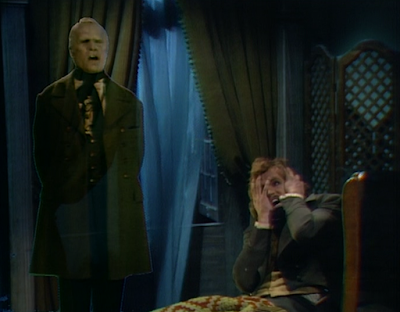 In the drawing room, Gerard plays a game of chess by himself. Gabriel walks in through the secret door and sneaks up on him. He karate-chops Gerard in the neck, knocking him out. He ties a rope around his neck and pulls it tight. 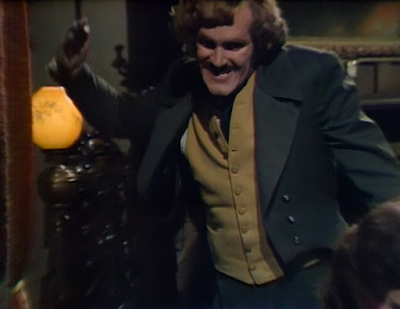 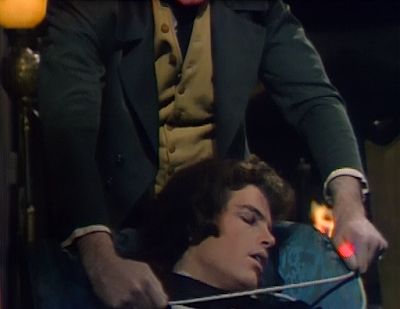 John: Fancy mirror shot in the opening! And then a great twist and entrance for Angelique! Of course, Gerard still could have killed Barnabas and been done with it, right then and there...
Christine: That scene was well played. Gerard must have been too flabbergasted to do anything. At the very least he could have asked about the skeleton in the basement.
John: Lara Parker has played this scene so many times before. I have to admit, I watched this scene between she and Barnabas thinking this is the most important event in the history of the show since Barnabas' arrival nearly 1000 episodes ago... but just like Barnabas, I'm so jaded, I know it can't be true. But throughout this episode, each time I thought they would show her true colors, they stuck to her story. Kudos to the writers for getting me to doubt myself, if only for a brief moment in time. 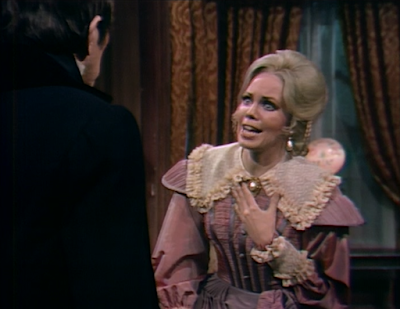 Christine: Consider that sometimes this show likes to do the unexpected. Even Julia seemed to truly believe it, with the way she was freaking out, though what she really may be upset about is that her beloved Barnabas is now mortal and she could lose him. This is certainly a game changer, as it will most definitely alter future events at Collinwood. 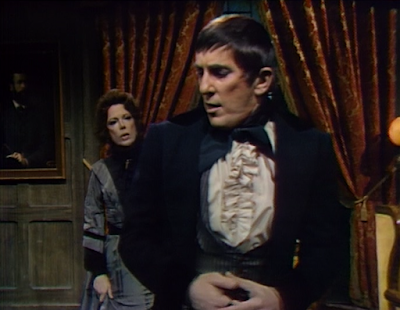 John: Wow! A Ghost of Daniel appearance, and Gabriel takes the most steps we've seen — for the first time without his wheelchair nearby! But can he truly do-away with Gerard so easily? I think not. Though wouldn't it be funny if he actually killed Gerard, and in doing so sealed Quentin's fate by eliminating the real warlock Barnabas, Julia and Angelique are out to expose. Gerard surviving this event is the only thing I'm more sure about than my assumptions about Angelique's sincerity. 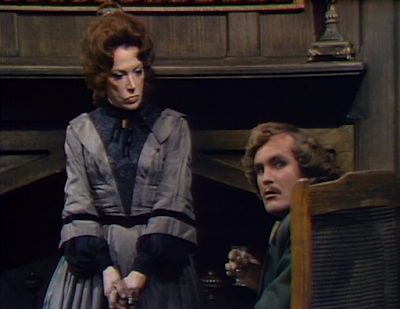 Christine: I can't believe that Gerard was so engrossed with his solo chess game that he didn't know Gabriel was creeping up behind him, so it appears to be some kind of a set up. 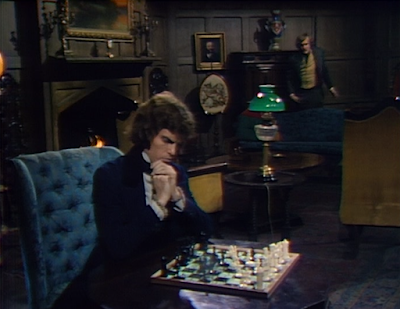