Trask and Gerard take down the brick wall in the basement of the old house. It reveals a skeleton. Trask says at last he has found his father's resting place. Gerard asks if they can prove that it's him. He searches the skeleton and finds a note. Trask says Barnabas Collins killed his father, and takes the note from Gerard, hoping it will explain why. Trask reads the note. It tells his father to go to the basement of the old house to find out who was responsible for all of the attacks and the death of Abigail Collins. It's signed 'A.' Gerard asks who Abigail was, and Trask says it was Barnabas' aunt, and apparently another one of his victims. He says she was supporting his father to rid the countryside of witches. She instigated the trial of Victoria Winters. 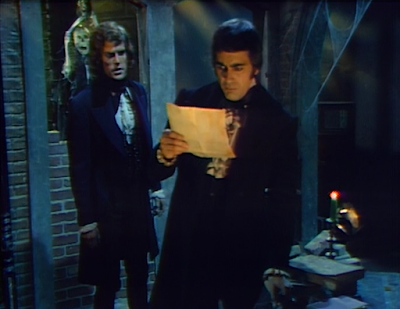 Gerard says that Ben worshiped Barnabas, and would do everything to protect him. He says if they only knew what the letter 'A' meant. Trask checks the date on the note, and says it's the date that Ben notes in his journal of the appearance of the witch. Trask wonders if it's Angelique. He says that was Barnabas' mother. He says if Angelique was the witch, she wasn't Barnabas' mother, she would be his wife. Gerard asks why she would betray him if she was his wife. Trask says it doesn't matter. He's sure Barnabas is a vampire, and he was married to a witch. He points out they have never seen him during the day. Trask says they have all the evidence they need, and his father's death will be avenged. Gerard says they must conceal the skeleton so no one finds out they found it. They move an armoire in front of the brick wall. 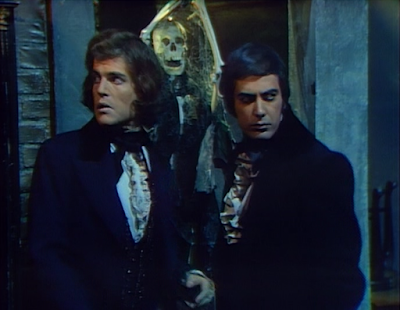 Barnabas arises from his coffin and exits the secret room.

Gerard and Trask start upstairs when they hear Julia and Barnabas talking upstairs. Julia describes there's hope for Quentin. She tells Barnabas that they may have misjudged Gerard. Barnabs says he hopes they are wrong about him. Barnabas offers to escort Julia back to Collinwood on his way to see Quentin. Trask asks Gerard what they suspect him of. Gerard says he has no idea what they meant. He says they can't be concerned with that now. He says that by light of day tomorrow, they will have sufficient proof against Barnabas. 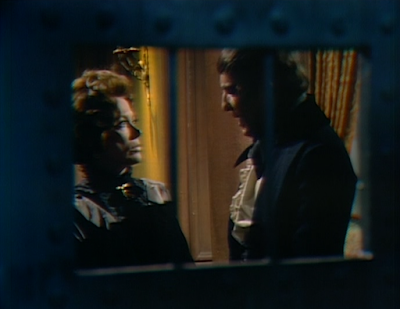 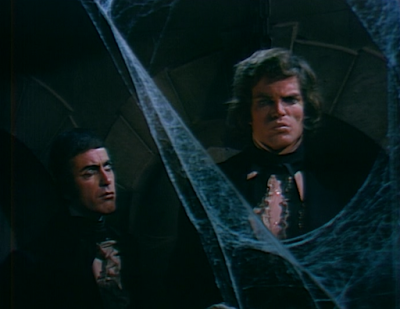 Carrie comes downstairs when Gerard returns to Collinwood. She asks him if he and Trask took her grandfather's diary. He says they just borrowed it, and will return it. She asks why, and he says they wanted to. He tells her he meant to ask her, but he couldn't find her. She asks why they borrowed it, and why it's so important to he and Trask. He assures her it was for Flora's book. Carrie asks for it back. He says he'll get it for her tomorrow, and she says she wants it now. He explains that he doesn't have it. She asks if Flora has it, and he says she does. She says she'll go get it and he forbids her from leaving. He tells her they have already read the book, and tells her to stop acting like a precocious child. She tells him that he never screamed at her before. He apologizes, blaming the added pressures of being the new master of Collinwood. She says he changed before then. He bids her goodnight. 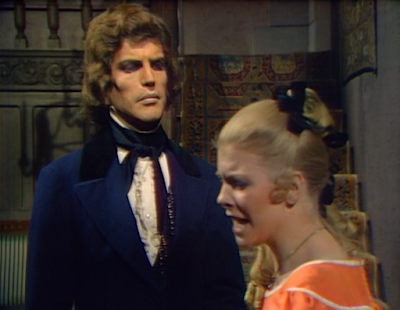 Julia arrives at Collinwood and finds Carrie upset in the drawing room. Carrie says it's not very serious. She says Gerard used to have a beautiful smile. She asks Julia if she knows why he has changed. She says he shouted at her today, something he had never done before. Julia asks if she provoked him. Carrie goes on to say Gerard shouldn't have taken it without asking. Julia asks if what he took was important. Carrie says he took it to Flora. Julia asks what he took. Carrie says he and Trask took her grandfather's diary. Julia tells her that she'll be happy again, and then says she has to go. Carrie points out that she just arrived, and Julia makes a hasty exit. 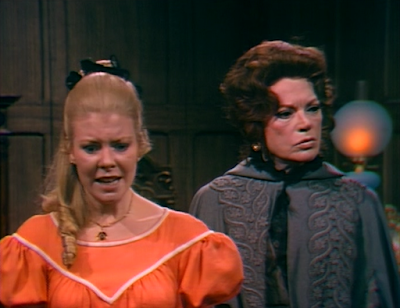 Barnabas asks Julia why they would want to see Ben's diary. He says they must be on to something. He wonders how incriminating the diary would be. Julia asks what they could possibly find, and then realizes that Ben might have mentioned the secret room. Barnabas is sure that he wouldn't. Barnabas says that he loved Ben, and he would never reveal his secret hiding place. Julia suggests that he go away. He says they can't run away until they do what they came to do. She says that she will stay. He says they will both stay. She asks him what they will do, and he says he doesn't know. 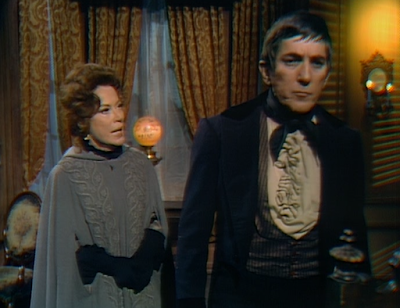 Trask sneaks into Collinwood and meets Gerard in the drawing room. He asks where everyone is and Gerard explains that everyone has gone to bed because it is late. Trask hands him a pistol, and tells him the bullets in it are silver. He asks Trasks why he's giving it to him. Trask says he has to appear in court in the morning, so Gerard has to do it. He's upset that he won't be able to exact his revenge for his father's death, but it must be the Lord's way to have him testify against Quentin. Gerard says that they don't know where Barnabas' coffin is. Trask points out that it can't be in the old house, since they searched it from top to bottom. Gerard suggests that there could be a secret room in the house. He says he already found it by looking at the architect's drawings. He says Barnabas' coffin is behind the bookcase in the old house. 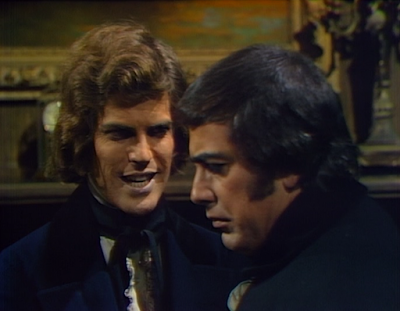 Julia is sitting by the fire when Gerard arrives at the old house. He forces his way in and points a gun at her. He tells her not to play innocent. He says she knows what he's going to do and tells her to leave the house because it won't be pleasant. He goes to the bookcase and searches for a lever to open it. Barnabas appears and asks if he's looking for a book. Gerard is shocked to see him in the daylight. Barnabas offers to help him find the book he's looking for. 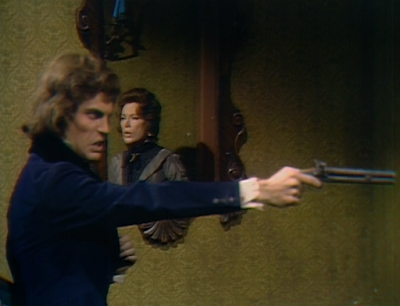 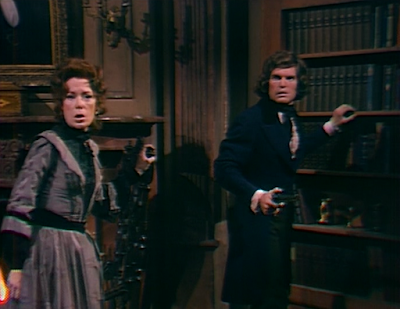 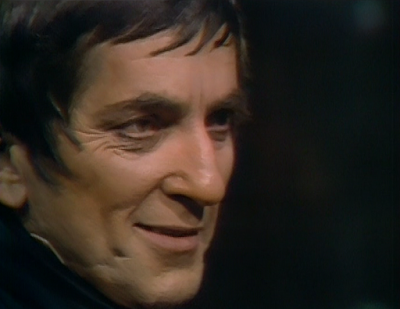 John: So the dynamic duo of Gerard and Trask has it all figured out. Unfortunately, their next bright idea is to move a giant armoire in front of the skeleton and leave the pile of bricks strewn about in the basement. Sure, no one is bound to notice that...
Christine: It just goes to show that they'll be no match for Barnabas and Julia. 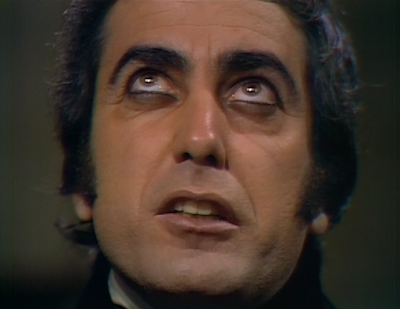 John: I was surprised when Julia started to give Carrie womanly advice, until she suggested that Carrie provoked Gerard's shouting at her! Ouch! Nice way to blame the victim, Dr. Hoffman!
Christine: Well, it is 1840, so she can't express feminist ideals or she'll be tried for witchcraft next.
John: Today's conversation perfectly sums up Barnabas and Julia. Zero plan, with all lives in Collinwood hanging in the balance. Of course I will be very interested to find out how they pulled off Barnabas' special daytime appearance. Julia's shock at seeing Gerard bursting in was second only to Gerard's surprise seeing Barnabas in the daylight!
Christine: It seemed to me she was pretending to be shocked, as she was being slightly more overdramatic than usual. Perhaps she happened to have a syringe of her anti-vampire treatment in her pocket when she climbed the Stairway Through Time. However they did it, you think they might have done it sooner.
Posted by John Scoleri at 6:00 AM