Rachel hears someone in the mausoleum. The secret door opens, and she is excited to see Tim. She embraces him, and is shocked to see Trask at the gate to the mausoleum. She realizes that Tim has betrayed her. Trask tells Tim to return to the school, as they both shouldn't be gone at the same time. Tim tells Trask that he won't touch Rachel. Trask says he acts only in accordance with his own conscience. Trask says that he and Rachel must come to an understanding. She tries to run off, and Trask grabs her. He tells him that Tim is no hero, and that Rachel knows he delivered her to him. He sends Tim away. 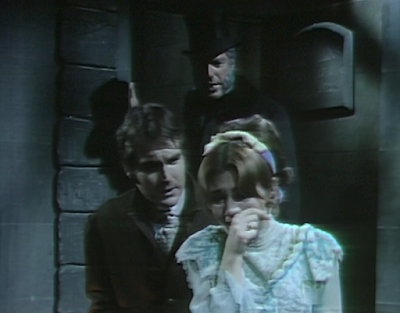 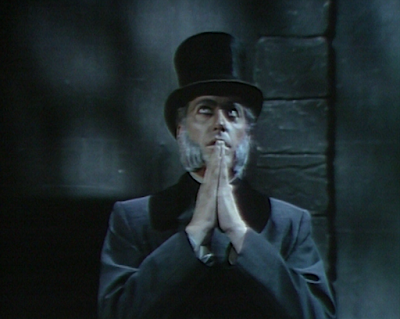 He asks if his maker has made her some strange instrument of change for him. Or perhaps they were meant to change each other. Trask tells her that the devils within her will not let her be rational. She asks where he's taking her. He offers her the choice of the school or the police. He tells her that Tim told him that he had no knowledge of the murder of his brother in law, but that she did. 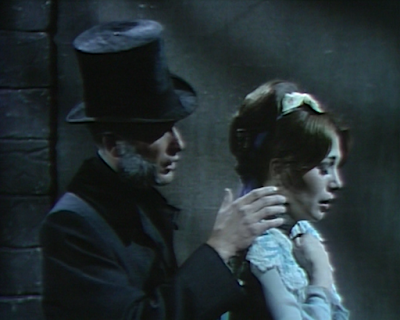 Laura snaps her fingers to light candles in the cottage. She calls to Nora, telling her that she needs her to come to her. She tells her that she'll hear her voice if she finds the flame. 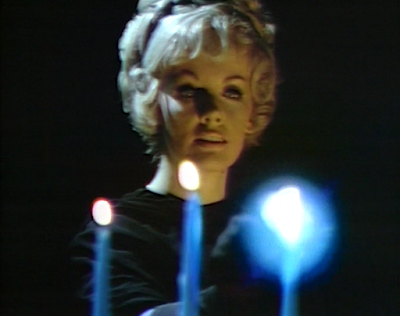 Nora comes downstairs at the school and finds the fireplace. Laura calls he to look into the fire, where she'll see her face in the flames. Nora says she can't see her. Laura's voice tells her to come closer. Nora asks why she can't see her. Laura's voice lures her towards the fire. Nora comes closer to the fire. She sees her mother's face, and she continues to call her closer. 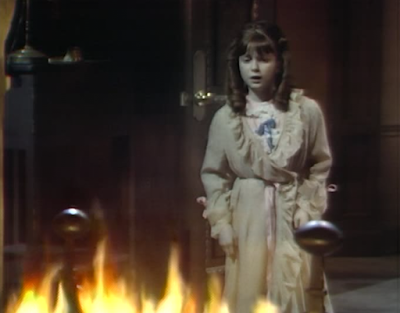 Tim walks in and sees Nora in front of the fire. She tells him that she wants her mommy. She says she saw her mother, and he suggests that she was sleepwalking. She tells him that she wants to go home to Collinwood. Trask and Rachel come in. Rachel grabs Nora, who is happy to see her. Nora asks if her mother sent Rachel to take her home. Trask tells Rachel to tell Nora why she's there. He leaves the two of them alone together. 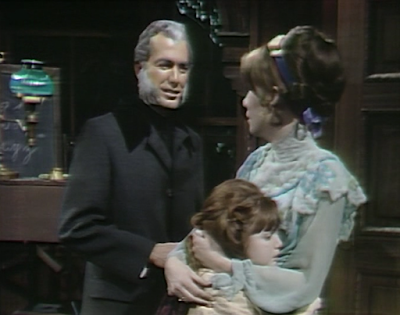 Nora asks if her mother sent her. Rachel says she returned to the school to teach. Nora is excited to hear that. She tells Nora that she'll watch over her. Trask returns and tells her they've had enough time. Rachel offers to take her upstairs, and Trask says she forgot to say, "sir." He says there will be no favoritism. He will listen to Nora's prayers, and her punishment will be decided later. Tim arrives to apologize. Trask drags Nora off with him. Rachel says that she doesn't want to talk to him. Tim says that Trask wants them both to feel guilty for the death. 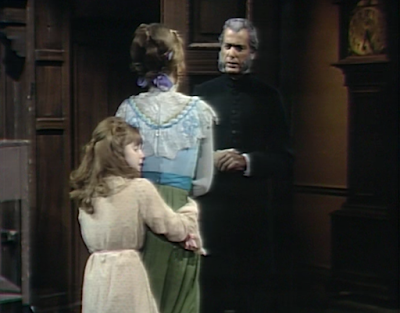 Trask is in his office when there's a knock on his door. He asks who's there, but no one answers. He opens the door and Laura introduces herself, saying she's come for her children. He asks how he is to know that she is in fact their mother. He says as far as he knows, their mother is away. 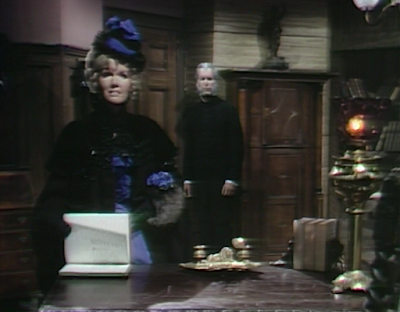 She tells Trask to have Nora sent down, and he refuses. He says he won't do anything without the direction of Judith or Edward Collins. He picks up the phone and drops it, saying it burned his hand. 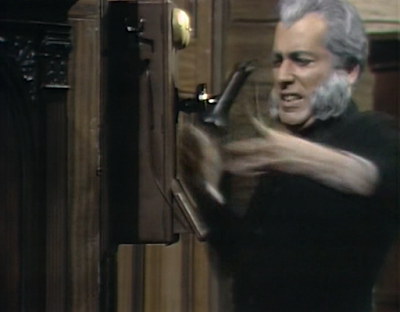 He hangs the phone up and says they follow rules. He says he won't allow visits unless it's an emergency. She tells him that her children will not spend one more night in his school, and walks out. 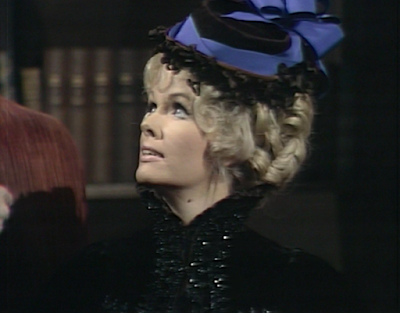 Rachel is working on something when Nora comes in. She says that her mother has arrived. Rachel tells her she's wrong. Nora asks her to check. Rachel does, and Nora asks the fire why her mother won't let her see her.

Trask tells Rachel that he's not responsible to tell her everyone he speaks to. He asks her why she's asking about Laura Collins. She sees smoke coming in from under the door and says there's a fire.

Nora is trapped, surrounded by fire. 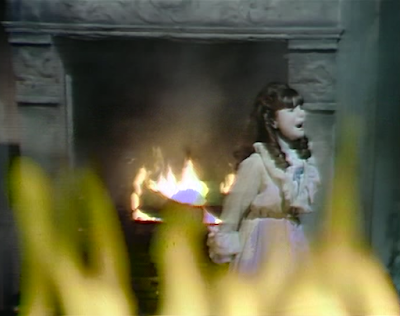 John: Trask sure seems to be putting inappropriate moves on Rachel. I'm beginning to think that bringing her back to the school, where his wife awaits, might get him into trouble. 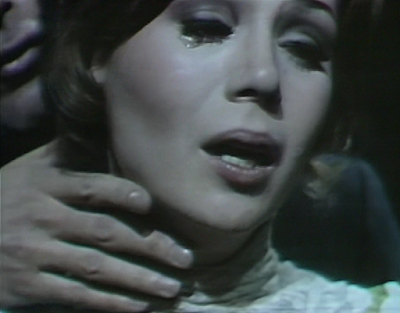 Christine: His wife's duty is to obey him, so he can probably get away with molesting Rachel without any interference from her. Truly a horrible man.

John: Tim needs to get a backbone and stand up for himself, if not those around him. That said, he does remind me a lot of Tom. Are we sure they aren't related?

Christine: There may be a remote and unlikely possibility, but probably not. I love the effect of Laura lighting candles with a flick of her finger. That was brilliant! 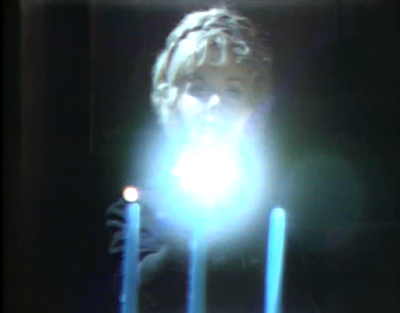 John: It sure seemed like Laura was trying to lure little Nora right into the fire. Good thing for Jamison that he had the day off today. I seem to recall the Laura we met in the 60s wanting to burn David up with her. Did she also just want him to burn? What does she get out of roasting the children, particularly if she's not there to experience it?

Christine: It's unclear what benefit she receives by immolating her children, but it goes back to one of her early incarnations, as we learned from the séance in Episode 186, that David Radcliffe also burned with his mother. She may be trying to have them be reborn with her, though it doesn't appear to be working. It's interesting that Trask's "Punishment Book" should have its label on the front cover secured with transparent tape, which won't be invented until 1930. Perhaps Gregory Trask is also a time traveler, and not just a creepy guy who logs punishments in his book for his own gratification. 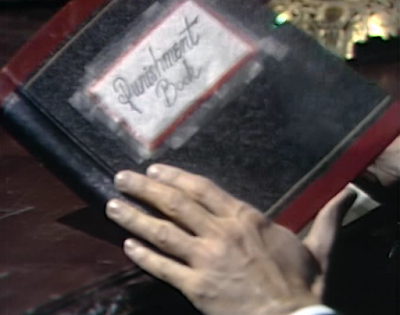