Daphne reads another letter from Joanna. It says she is coming for her now, and doesn't want her to be afraid. She calls to Joanna, and begs her to help her. The front doors of Collinwood swing open. Daphne goes to them and shuts them. Back in the house, she finds Joanna's cape on the floor. She asks why she's doing this, and asks for her help to have the love that she once had. She begs for her sister's help, and when the doorway at the top of the stairs opens, she runs into the drawing room.A figure approaches the drawing room. Samantha opens the door and asks Daphne what she's carrying on about. Daphne says she saw a cape, and Samantha says there's no cape. She says Daphne was frightened by her own imagination, and she's not fit to be Tad's governess. She says Quentin hired a pretty face. She then says she saw a figure by the drapes, and then disappeared. Daphne asks what she looked like, and Samantha asks how she knew it was a woman. She claims Daphne has brought evil into the house, and she's to stay away from Tad. 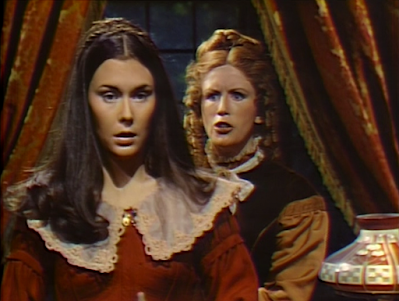 Desmond tells Quentin that a new judge denied his motion to postpone the trial. He adds that the county prosecutor resigned. Desmond expects Trask will be named. Quentin can't believe it. 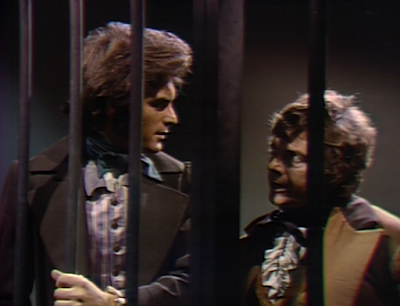 Samantha finds Tad up by the fire. He says he keeps thinking about tomorrow, and what's going to happen to his father. Samantha tells him he must wait and hope for the best. He tells her that she has to go to court and tell them that the accusations are not true. He asks her to do that, and she turns away from him. He says that his father is innocent. She asks him to be reasonable. He says that she must show them the truth. She assures Tad that Desmond will do what he can to prove that. Tad asks if she wants to help his father. She asks Tad to have faith in her. 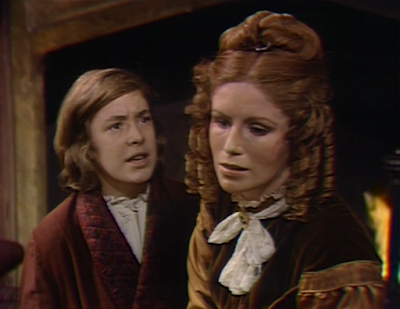 Desmond arrives, and Samantha sends Tad upstairs. Tad tells Desmond to let his father know he's praying for him. He goes upstairs, and Samantha says she must be able to get Tad away from Collinwood. Desmond reminds her that if he leaves before 21, he loses the inheritance. He adds that if Quentin is cleared, then all will be back to normal. She describes the choice between Quentin and Gerard as a choice between two evils. 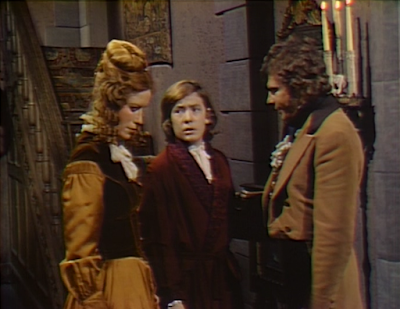 Quentin tells Daphne that he knows something is wrong, and asks her to tell him. She says Joanna is back from the grave. He asks what her latest note said, and she hands it to him. It says better she's with her than with Quentin. He tells her that Joanna would never do that. She says she found Joanna's cape, and Samantha saw her spirit in the drawing room, but didn't recognize her. She says that Samantha accused her of bringing evil into the house, and no to see Tad again. He tells her to take that to Gerard to deal with. He tells her to sneak out of the jail so that she doesn't get associated with him. 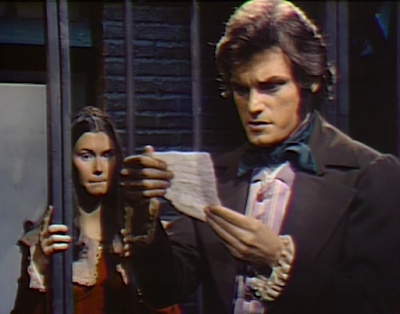 The tribunal is called to order. Desmond asks how the tribunal can begin with no prosecutor. He adds that the prosecutor resigned because the preceedings were repugnant to him. Desmond also moves that the trial be terminated on the grounds that it is unconstitutional. The motion is denied. The tribunal names Dawson as the prosecutor. Dawson apologizes for the delay, and tells Quentin that he understands they must be shocked, but he promises a fair trial. 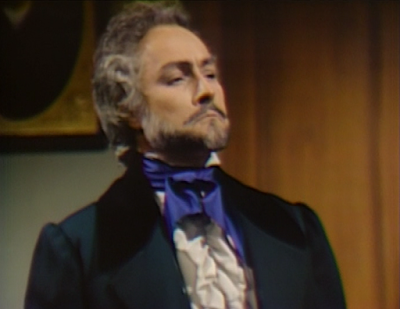 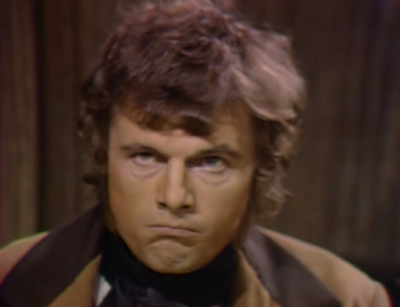 Quentin asks Desmond why he's upset, pointing out that Dawson is Gerard's friend. He tells Quentin that Dawson is here to crucify him. Quentin says they can't blame Gerard for everything that happens. Desmond objects to Dawson being the prosecutor, and his objection is denied. Dawson presents his opening remarks, noting that a series of regrettable incidents befell Collinsport, and it has been determined that withcraft was the cause, perpetrated by Quentin, who will be proven guilty and beheaded. Quentin tells Desmond that he wants to see Gerard right away. Desmond reiterates his objections to the tribunal. 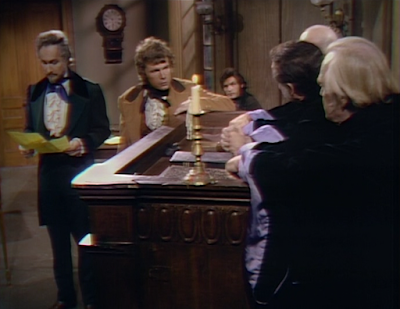 Dawson opens his case explaining that he was going to start with Trask, but instead will start with Samantha Collins. Desmond objects, saying that as his wife she cannot testify without Quentin waiving his rights, and Dawson responds that the rules governing the tribunal pre-date the constitution. They overrule his objection and call Samantha to the stand. She is sworn in, and Dawson asks how long she's known Quentin indulged in occult practices, and she says as long as she has known him. Desmond objects and Dawson withdraws the question. He then asks why she has come to testify. She explains that Quentin always dabbled in the occult. She is asked to provide a specific incident, and she says that he has communicated with the dead, and brought a spirit into the house to terrorize them. Dawson asks her to explain, and she says she has seen it. Desmond points out that what she saw may very well have been a figment of her imagination. Samantha points out that Daphne has also seen the ghost, and known of its existence for a very long time. 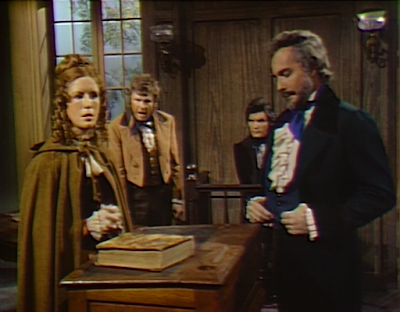 John: Does anyone else think that Samantha is plotting against Quentin and Daphne, planting the notes from 'Joanna.' I suspected her, and after her courtroom appearance, I'm all but sure she's behind it.
Christine: It was pretty clear she was responsible at the beginning of the episode when she did such a poor job of pretending she saw a figure behind the drapes. 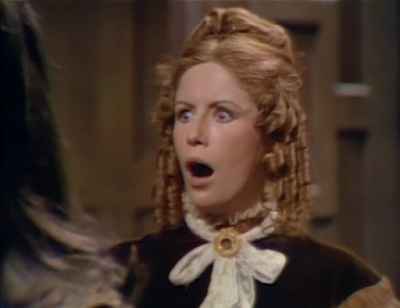 John: Dawson gives a command performance at the tribunal! Quentin doesn't stand a chance. It is funny how they play crowd noises to try and convince us there are more than seven people in the room...
Christine: Get a platter for Quentin's head. With Dawson on board, he's way more done than if Trask had assumed the role. I've never heard so many people in Collinsport all at once. There was certainly never that much chatter at the Blue Whale! 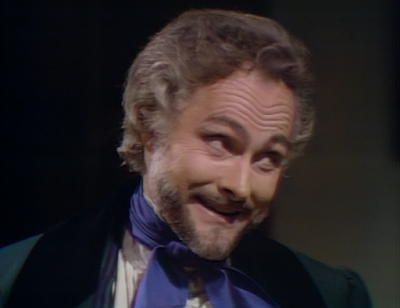 John: I love how Quentin thinks he can arrange to see Gerard in the middle of the tribunal. I think he's about to realize a little too late what others have been trying to convince him of for some time now.
Christine: He may be learning belatedly to always listen and follow your lawyer's advice. Perhaps Desmond will pick out a nice box to store Quentin's head in when all is said and done. 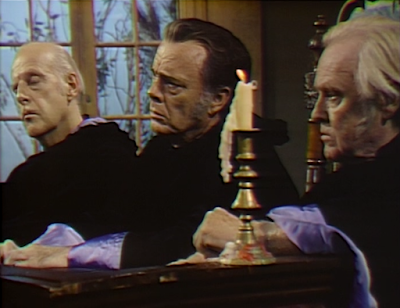