Daniel revises his will when Gabriel wheels in. He demands that he give him the pen. Daniel calls him an ungrateful wretch. Gabriel complains that he was always second to Quentin. Daniel says Quentin is ten times the man that Gabriel is. He says that if Quentin had been the one to have the accident, he would have willed himself to walk again, rather than wallowing in self pity. Gabriel stands up and tells him that's enough. He walks to his father, and Daniel can't believe it. Gabriel explains that he's been able to walk for years, and waiting to get back at Quentin. He says that he killed Randall, and Quentin is going to pay for it. He grabs the will, and Daniel falls to the ground. Gabriel is concerned about his father, and tells him not to tell anyone. He gets back into his chair, and Samantha comes in and asks  what happened. He tells her to get Julia, and after she's gone he gets out of the chair and reviews the revised will, which reinstates Quentin as his heir. 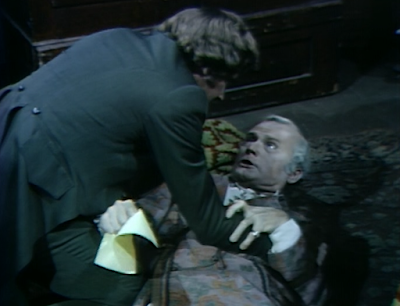 Gerard asks Desmond if he's visited Quentin. He says he did. Gerard asks if they must have their differences, and says he wants to help him. Desmond asks who would want to get rid of Quentin, and why. He points out that Gerard is awfully friendly with Trask. He says that while Trask has his issue with Quentin, he doesn't believe that he would plant voodoo dolls, or kill Grimes' herd. He says there must be someone else. Gerard asks if he means him. He reminds Desmond that he's Quentin's best friend. He says Quentin doesn't have a chance for an acquittal, and Desmond disagrees. He says all of the evidence is circumstantial. He says Quentin will be cleared of the murder charge, and being Quentin's closest friend, that should put him at ease. He walks out and Gerard considers that murder will not be the charge against Quentin... 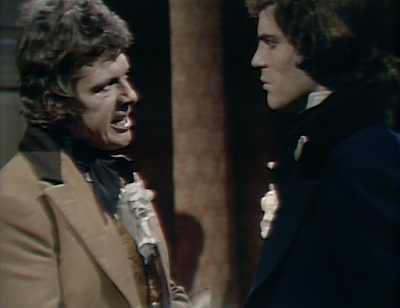 Samantha tells Gabriel that he doesn't have to stay by his father, because his presence may upset him. Daniel sits up and mentions Gabriel's name. Gabriel tells Samantha to leave, as his father wants to talk to him, and Daniel says he lived a life of lies. Samantha asks him what he's trying to say. He starts to say Gabriel can... and he falls back. Gabriel says that he's dead, and they'll never know what he was going to stay. He says things are going to change, and tells her to leave him alone with his father. Gabriel says he couldn't explain while he was alive, but he always did what he could to be like Quentin. 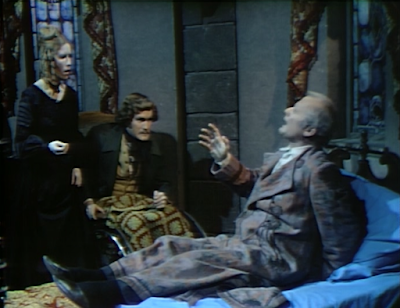 Edith walks in, seemingly happy, saying Samantha just told her. She asks Gabriel what he's doing when he places Daniel's revised will in the fireplace. She asks if he made him have the attack. Gabriel tells her to never say that. He points out that he's the new master of Collinwood, and she'll do as he says. He sends her to Rose Cottage to tell them that Daniel is gone. She says he can send a servant, and he agrees, and reiterates his demand that she go. 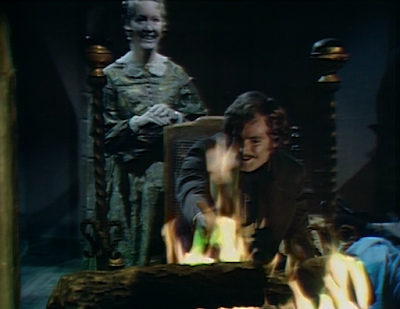 Desmond is shocked to hear the news. Gabriel asks when, and who was there. Edith says that Gabriel was with him. Desmond asks if Quentin knows, and she says he does not. She says they sent for Trask. Desmond goes to tell Quentin, alone. Gerard says it's interesting that Gabriel was with Daniel. She says that he says he's getting all the money. She says he's holding that over her. She tells Gerard he's worse than Gabriel, as he told her he'd show her a way out of this. He tells her to look into his eyes. He tells her that he has powers, and she can have them, too, if she follows his master. She doesn't understand, saying he only serves himself. He tells her that he has powers, telling her if she touches his hand, it will burn her. She touches it and recoils in fear. He asks her to touch it again. She does, and says it's cold. She asks him to teach her his powers. He explains there is no turning back once she joins his group. He tells her to repeat his words, and begins a Devil incantation. She does. At the end of the ceremony, Gerard kisses her. 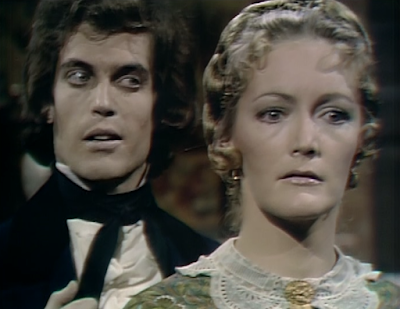 Desmond tells Gabriel and Samantha how upset Quentin was. He said that if he had been with his father, he could have made it up to him, and instead he died believing he was a warlock. Samantha says he should have thought about that sooner, and Desmond reiterates his innocence. Gabriel says that Quentin's remorse is genuine, because it isn't every day that one loses a fortune. Samantha says that Gabriel talks as if he's already read the will. She says that if Daniel changed it after Quentin went to jail, it would have been to give everything to Tad. Gabriel says that they should read it now. Desmond disagrees. Gabriel tells him to go to his father's safe and get it, and Samantha agrees. Desmond reluctantly agrees. He leaves, and Gabriel says he will be just as kind as she was when his father was locked in the tower room, and Quentin was lost at sea. He tells her that he'll let her and Tad stay in a room, and provide a very small allowance. 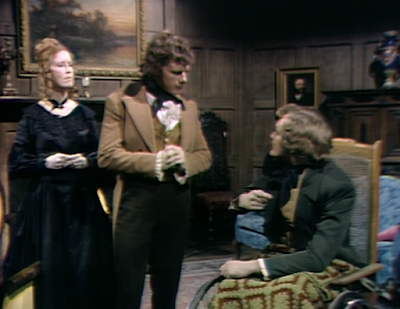 Edith returns to Collinwood, and Gabriel asks why she didn't return with Desmond. He suggests that she chose to stay with Gerard. She says she did. He tells her she won't see much more of him, and tells her to go to her room. Gerard enters and offers his condolences. Gabriel tells Edith to go to her room again, and asks Gerard to wheel him into the drawing room. 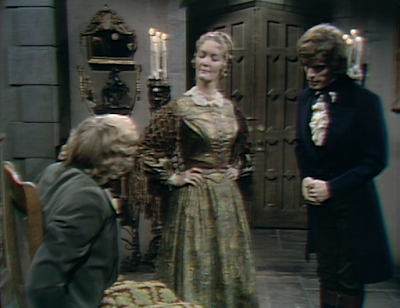 He tells Gerard that they're going to read the will. Gerard says that he hopes Gabriel will remember him for being a little help to him. He adds that he should receive a little reward of Gabriel's choosing. Gabriel says that Gerard saved his life. He says that as soon as the will is read, he wants him out of the house, and he is never to return. Samantha returns and says she will not stay in the same room with Gabriel. She says it's none of his business. He explains he was a witness to the will, and she asks if he's seen it. Desmond returns with the will, and Edith joins them. Gabriel demands that Desmond open and read it. Gabriel asks everyone to sit down. Gabriel opens the envelope, and begins reading the will. Gabriel asks who gets it, and Desmond's only words are, "Oh my God." 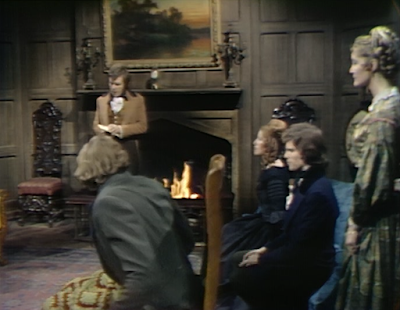 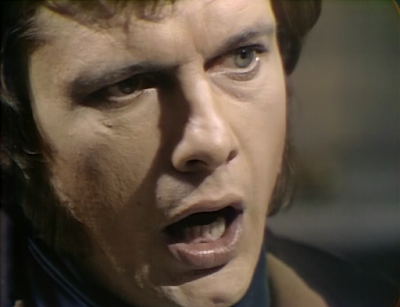 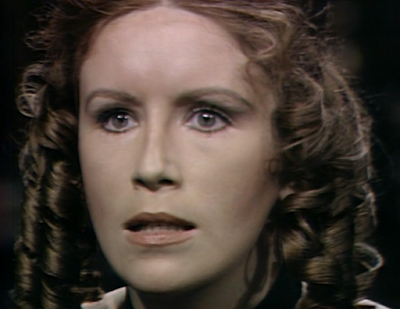 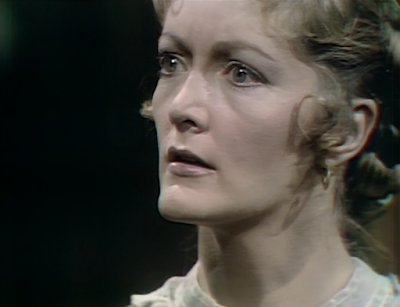 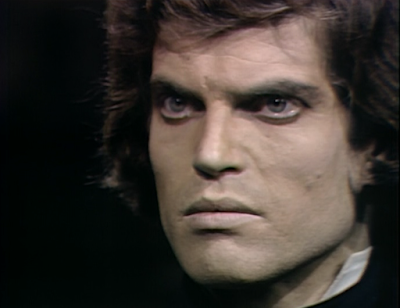 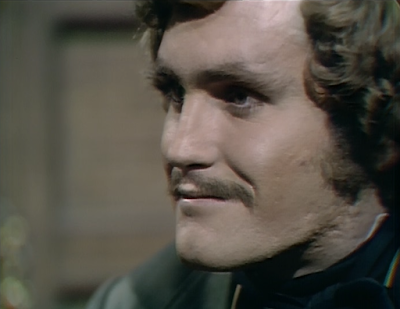 John: Poor Daniel. How many times does one character have to die in a single scene? And really, to what end. Just the tease that he might turn the tables on Gabriel, not that it necessarily would have mattered to any of the other vultures that might be present.
Christine: The tease was solely for our benefit, so we might have a moment of thinking the jig was up for Gabriel.
John: I guess it didn't matter that Edith didn't recite the exact Devil-worshiping words that Gerard fed her. I imagine the Devil is pretty willing to play fast and loose with those kind of specifics... What he didn't seem to require was that she forget everything, so I wonder how long before she spills the beans that she too is in league with the Devil.
Christine: Unlike Daphne, she has willingly joined his "little group," and the first rule of Devil's club is you don't talk about Devil's club, aka the coven. She is kind of dumb, though, so I could see her boasting that she could put a hex on Gabriel if he pushes her to it.
John: Damn. That's a pretty ruthless cliffhanger for Friday. It was pretty clear that Gabriel would not be the beneficiary, but it's not clear who would be the new master of Collinwood... Everyone present is sure to be disappointed, which would leave someone not present — perhaps Barnabas? I guess we'll find out on Monday!
Christine: Now that's what a Friday cliffhanger should be! I have to believe Gerard will benefit in some way, otherwise why would he be there? Also, by superimposing the image of Desmond at the end of the episode over the drawing room scene, it seems clear he was looking at Gerard when stating OMG. I hope we get to see Gabriel cry. 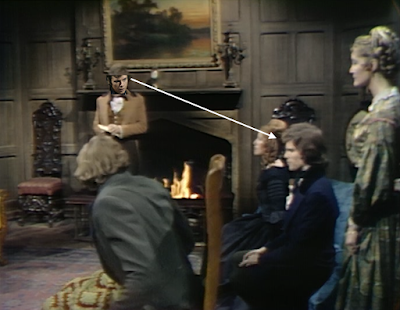