Someone in a hooded cloak sneaks into Daphne's room. It raises a knife and Gerard throws back the blanket and grabs the person's wrist. It's Samantha. He says, "My God! It's you — I knew it all along!" 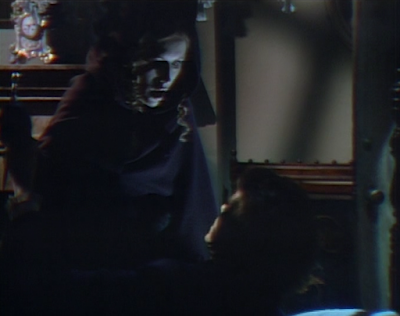 She tries to get away, but Gerard throws her into a chair. He demands that she tell him everything about the notes. She says she doesn't know what he's talking about. He asks her if she'd like to talk to the court about her testimony about ghosts. She asks him what he was doing in Daphne's room. He says there was a note saying she was going to be killed, after someone tried to kill him last night. He accuses her of both, and she says she had no intention of killing Daphne, but she won't tell him anything. He assures her that she will, or he'll call the police. 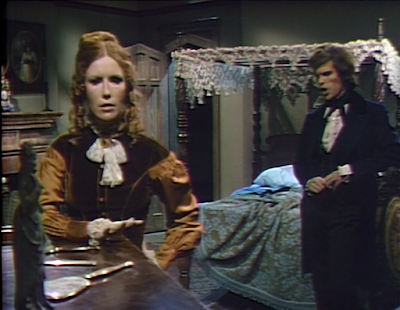 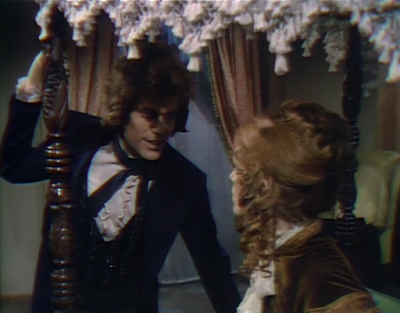 Trask tells Flora that the trial has taken up most of his time. She asks about the results of his investigation into Barnabas, and what he found out. Trask says they were convinced he was a vampire, but Gerard saw him during the day. Flora is relieved. Trask adds that he found his father's remains bricked up in basement of the old house. He says Barnabas' father was responsible, and Flora asks how he knows that. And even if he did, he can't hold Barnabas responsible for what his father did. Trask says the Collins' family seems protective of family guilt, and that she should be careful since she too could be charged with practicing witchcraft. 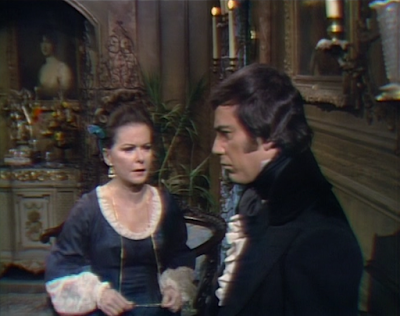 Gerard paces in front of Samantha. She asks if he's against Quentin, and he says yes. She says that means he's also against Tad, and Gerard says that he is fond of the boy. She says her life has been a living hell in Collinwood. He assures her that he understands. She goes on to describe briefly meeting Joanna when she was seeing her brother. She adds that when Quentin met her, he fell in love with her, and took her away from Randall. He asked Samantha for a divorce, but she said no. She adds that he went off to sea to forget about her. Gerard asks how it affected Joanna. Samantha says Joanna lived in a fantasy world, trying to relive the life she had with Quentin. When she deteriorated, she went to see her so she could see what was destroying her marriage. When she learned of the passion they shared, she hated Quentin even more. She later heard she escaped from the asylum, and then her body washed up on a beach. She says that all of her belongings were sent to Collinwood, and she locked them into a closet. She had written notes to Quentin while in the asylum, convinced her letters would bring them back. Samantha said she started using Joanna's letters, and then began crafting her own. When she found out Daphne was Joanna's sister, she realized she had to drive her out of the house. 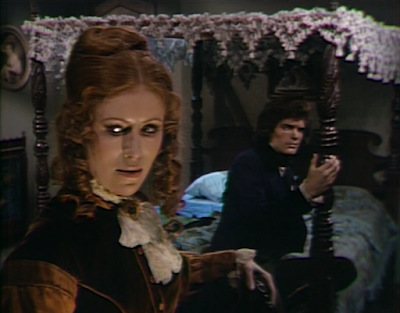 Gerard is surprised to hear Daphne and Joanna are related, but realizes that is why she had the pistol. He says she came to avenge her sister's death by murdering Quentin, and if not for Samantha and the notes she might have done it. Samantha says dying that way would be too good for him; that he deserves to be beheaded. Gerard asks him her if she realized that he was forced to treat her the way he did when Quentin returned. He assures her it's the truth, and suggests they could have a new life together. She says she could believe him if he helped her get Daphne out of the house. He tells her that he needs her to write new letters until they are rid of Quentin, and then they will also be rid of Daphne. He kisses her. 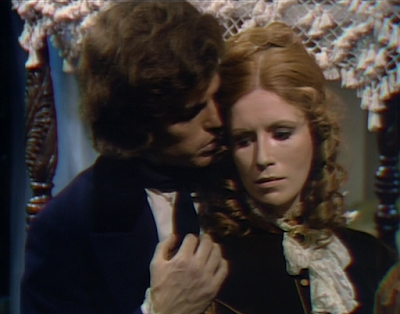 Trask tells Gerard that he hasn't slept well since his interaction with Barnabas. He says they will never get him by legal means, but he has another way. He points out the Barnabas will be at Rose Cottage. Trask tells him to let on that Roxanne has appeared to him in the cellar of the Trask chapel at midnight the past few nights. Gerard tells Trask that he will have Flora tell him. He asks what Trask has in mind for Barnabas. He explains that he's going to exact his father's revenge. 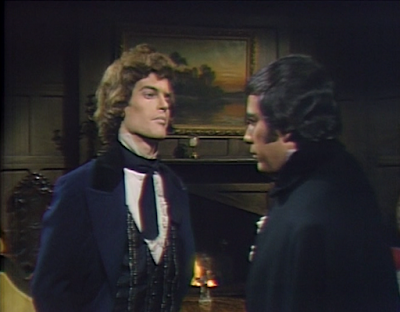 Gerard, Flora and Barnabas finish dinner. Gerard excuses himself, and Flora tells Barnabas that she felt guilty about being suspicious about him after the seance. She said that after talking to Trask and Gerard, they thought he might have been the vampire. She explains that she knows now that isn't true. She then mentions how Trask has been bitter since then, and has recently seen the spirit of Roxanne in the basement of his chapel. She says Trask refuses to go there again, and she says that she would love to hear what Roxanne's secret was. Barnabas declines a brandy and excuses himself. 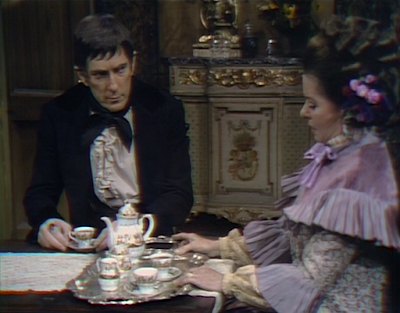 Barnabas arrives at Trask's chapel and calls to him. When no one answers, he makes his way to the cellar.  He calls to Roxanne, asking if she's there, and pleading for him to appear to him. Trask comes out with a gun. Barnabas realizes that it was a trap. Trask says he has waited a long time for this moment. He tells Barnabas to look behind him, and he sees a pile of bricks. Trask tells him that his father's death must be avenged, and it's only fitting that Barnabas should die the way his father did — sealed up behind a brick wall. Barnabas asks him if he thinks he'll get away with this. Trask threatens to shoot him if he tries to escape. He adds that he's glad Barnabas is human, and not a vampire. He tells him to put on manacles. Barnabas does as he's told. 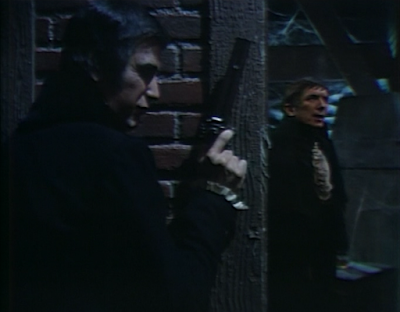 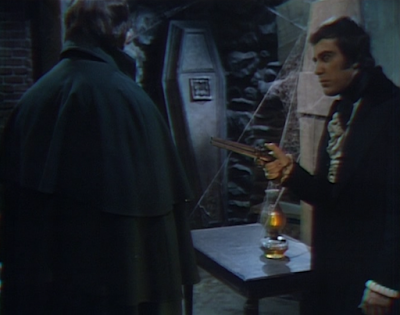 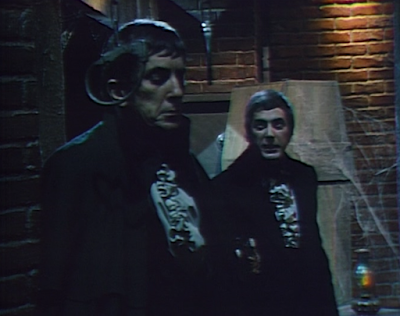 John: Oh yeah. Samantha. A few days off and I forgot all about her. Fair enough. I guess she has plenty of reason to want to see Daphne dead.
Christine: I love how they modify the beginning of the episode to rectify any misconceptions they deliberately caused at the ending of the previous episode. I was really hoping it was going to turn out that Joanna was not truly dead and was back to cause trouble for Samantha, Daphne and Quentin.
John: I'm not sure I'm willing to believe that Samantha is as crafty as they're making her out to be. And if she were really just trying to scare Daphne to make her leave, and not kill her, wouldn't a better disguise have been in order? And speaking of Daphne, where is she while all of this is going on? Wouldn't she be the slightest bit interested to find out what transpired in her bedroom?
Christine: I think she was staying at Rose Cottage, though that would be pretty rude of Flora not to invite her to sup with her and Barnabas if so.
John: Let's consider for a moment that your choices are to risk getting shot, or to be walled up behind bricks; buried alive. Wouldn't you at least try to overpower Trask? It's not like he's got an automatic weapon. Get him to misfire once and you could basically run away before he could stop you. But that would deny Trask the poetic justice he so desires, so Barnabas appears to go along with him. I guess we'll see how he weasels his way out of it.
Christine: I was thinking the same thing. Better to risk getting shot. Perhaps Barnabas is counting on his dear witchy wife to get him out of yet another predicament.
Posted by John Scoleri at 6:00 AM