Gerard asks Gabriel what's wrong. He points out that it was Gabriel's account of things that led to Randall's murder and brought Quentin to jail. He asks what Quentin will do to him if he's found innocent. Gerard says he just spent several hours with Daniel, updating his will, and he knows who the new heir to Collinwood is. Gabriel asks who it is, and Gerard says he's honor bound not to tell. Gabriel demands to know if he's the heir. He thinks that Gerard being reasonable with him is a sign that he will be the heir, and Gerard wants to be in his good graces. Gerard quotes Daniel, saying, "Quentin Collins is no longer my heir... but I have another son." Gabriel smiles. 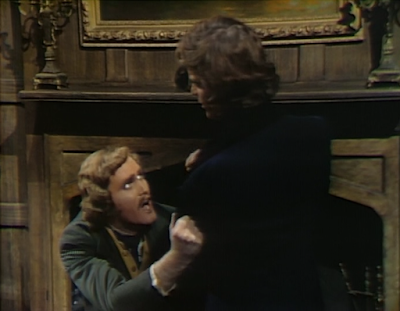 Lazlo meets Angelique and she asks what took him so long. She then slaps him, and blames him for Julia being alive and Roxanne being destroyed. He explains that Barnabas forced him to say where Julia was. She has no reason to suspect he would know where Julia was. He admits he took Julia's ring, and Barnabas saw it. Angelique calls him a fool. He asks what he can do to make it up to her. She says something more terrifying has happened. Judah Zachery has returned. He asks who Zachery is, and she begins to tell him. 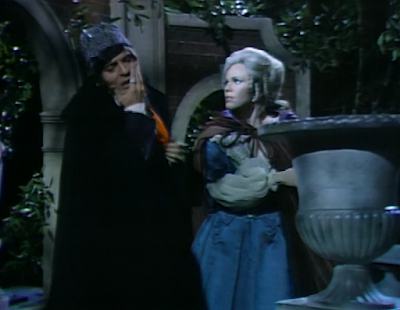 Daphne returns to Collinwood, and Gabriel asks her where she has been. He tells her that Quentin was upset that he couldn't find her. She asks where he is now, and Gabriel tells her that he was arrested for the murder of Randall. She says she's going to see him, and leaves. 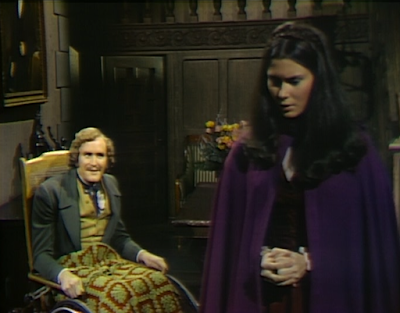 Angelique tells Lazlo that she was given safe passage out of the country when Zachery was beheaded. She says he has survived all this time, and has taken possession of a living person. She thinks it is Gerard, because he caller her Miranda. She explains that Zachery said he would return to destroy everyone responsible, including the entire Collins clan, and her. She says she needs a personal possession of Gerard's, and tells Lazlo that he's going to get it tonight. 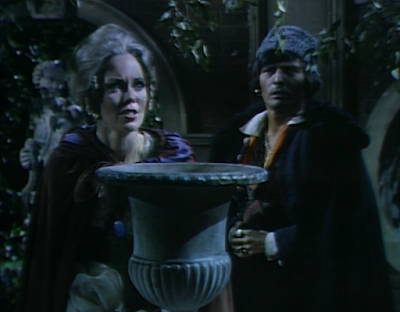 Quentin sits in jail. Grimes' daughter brings him a letter that was left for him. He asks where she got it, and she says she doesn't know. He grabs her through the bars and demands that she tell him who brought the letter. She says she doesn't know. She says it just appeared. Daphne arrives to see Quentin, and he tells Grimes' daughter to leave. He tells Daphne that he didn't kill Randall. He shows her the note Grimes' daughter brought him. It's another from Joanna. Daphne says she's frightened, and that they're talking about setting up a witchcraft tribunal in the village. She says that soon everyone will know he's innocent, and kisses him through the bars. 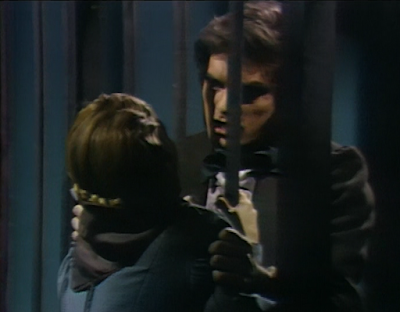 Lazlo arrives at Collinwood. Gerard wasn't going to let him in, but Gabriel calls out that he knows him. Gabriel introduces Lazlo to Valerie and Gerard. Lazlo offers to read Gabriel's palm. He sees a change for the better. Gabriel smiles. Gabriel asks him to read Gerard's palm. Valerie asks Gerard to let him, and he agrees. While Lazlo reads his palm, he attempts to lift his watch fob. Valerie watches him intently as he takes it. 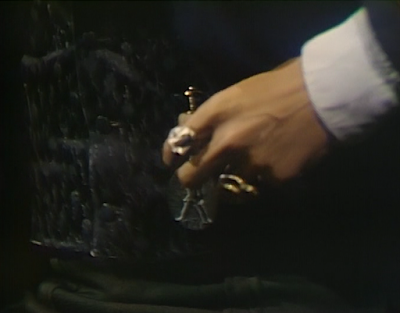 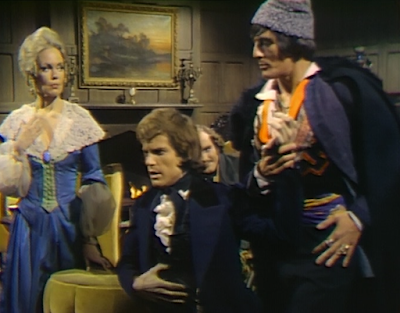 Daphne tosses and turns in her sleep. She dreams of Quentin in jail. She sees Grimes' daughter taunting him, saying that the execution will happen before Daphne sees him one more time. She then sees her self in Gerard's embrace. Gerard tells her that it doesn't matter if Quentin loses or not, now it's just she and him. She bolts awake, unable to remember her dream. 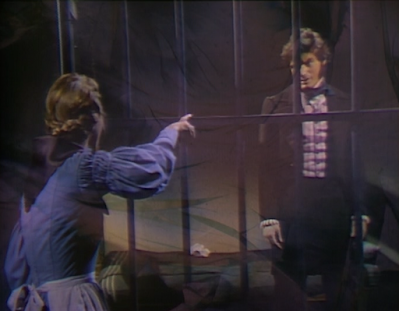 Lazlo returns to Angelique and gives her the fob. She says that she'll return it to Gerard. But she'll first perform her ceremony to determine if Gerard is in fact Judah Zachery.

Gerard asks Daphne if she had another bad dream. She says she can't remember. She says that sometimes she thinks he's Quentin's friend, and other times she doesn't trust him. He says she will soon have to make up her mind about him.

Angelique sits by the fire and calls upon the Prince of Darkness for help. She asks if the object she holds belongs to her enemy, she asks him to show her the face of who Judah Zachery possesses. She's shocked to see Quentin. She doesn't notice Gerard watching from the foyer, smiling. 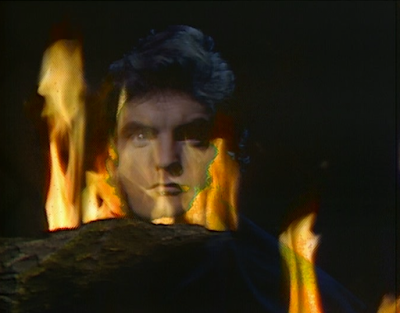 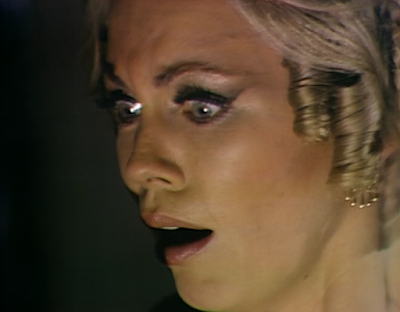 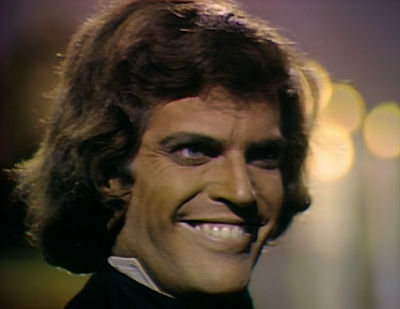 John: So what do you make of Gerard's quote from Daniel about his 'other' son? Could he be referring to Gerard, having married his way into the family by way of Samantha? Or do you think Gerard just cut the quote off, and Daniel ended it with something along the lines of, "and that dead-beat isn't about to get any of my money!"
Christine: Either scenario is possible. It would be fun to see Gabriel bust a vein to hear Gerard named as heir to the Collins fortune. After Quentin told Daphne that witch tribunals were abolished, it seems likely they will be reinstated for his benefit. 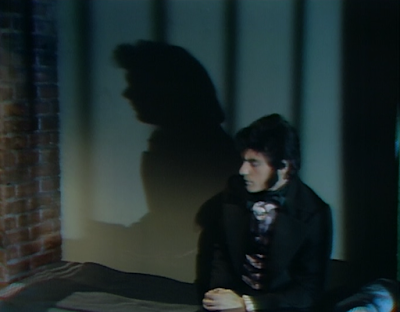 John: Break out the SLAP-TRACKER! Angelique delivers an epic bitch-slap to Lazlo that might be the series best!
Christine: It was pretty good, though we may have to have a vote on that at some point. 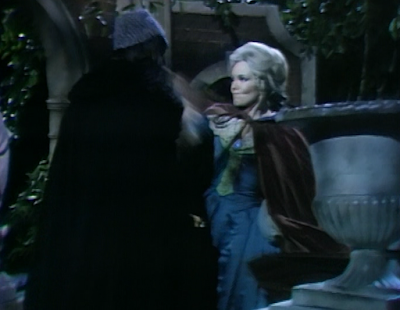 John: Something tells me it wasn't supposed to take Lazlo quite so long to swipe Gerard's watch fob... and it seems highly unlikely that after a few minutes of rib-tickling, Gerard wouldn't have noticed! 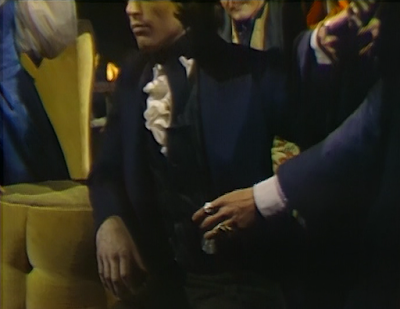 Christine: Surely he noticed, which was why he made sure Quentin's face appeared in the fire. Of course, this whole situation is absolutely ridiculous. Angelique had enough evidence to know Gerard was possessed by Judah when he called her Miranda, and didn't need a spell to confirm it. Also, while she's been pretty careless about performing spells where anyone could walk in on her, I don't believe she'd leave the drawing room doors wide open when Gerard can come and go as he pleases at Collinwood. I only hope she'll turn and catch him grinning like a fool behind her. 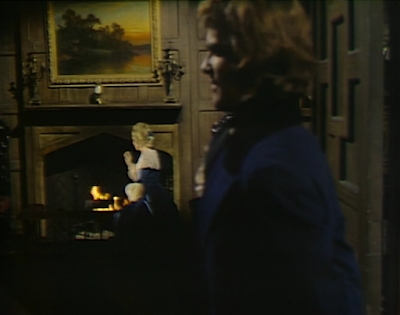