The judge asks Quentin if he would like to cross-examine Trask. Quentin says it would be best handled by his council. He clarifies that he has found a man to handle his case, and he requests a recess while they await his arrival. Dawson objects. Quentin suggests that he deserves representation. Before any more can be argued, Barnabas walks in and says that they need not wait any longer. Trask is shocked. Quentin presents Barnabas as his attorney. Dawson objects. Barnabas says any citizen may volunteer their services in this sort of proceeding, and he volunteers his. Barnabas requests a transcript of Trask's testimony. Trask says he cannot continue his testimony, saying he has a severe pain in his chest, and asks to be dismissed. 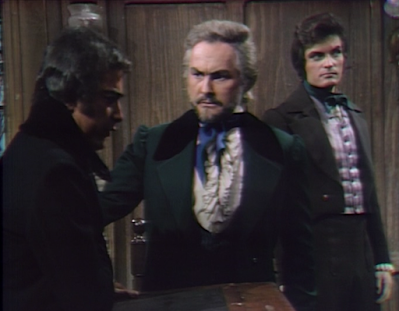 Barnabas asks for a postponement, and the judge agrees to postpone the trial until the next morning. Dawson says that may not be enough time, and the judge says if Trask's condition becomes more serious, they can discuss it tomorrow. 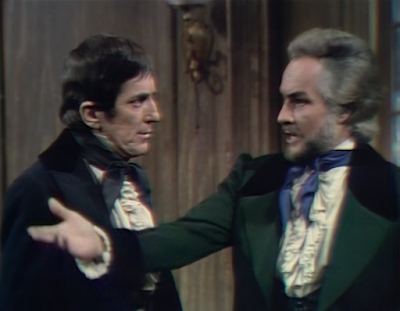 In his cell, Quentin says he got Valerie's note, but he doesn't understand where he was. Barnabas says Trask had imprisoned him, and Valerie and Julia found him and freed him. He describes being bricked into an alcove and left to die. Quentin asks why he didn't tell the judge. Barnabas says that for the moment, he doesn't intend to turn him over to the authorities. He asks Quentin to trust him. They review Trask's testimony together. 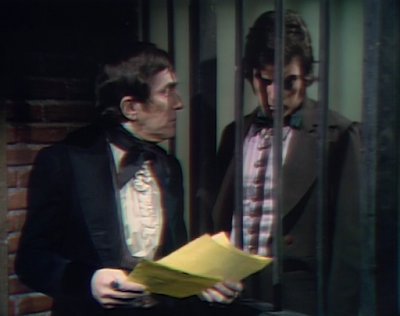 Trask paces around his chapel when Barnabas comes to see him. He asks if Trask is wondering how he got out. Trask says he used Quentin's sorcery, and that he should be dead. Barnabas says that maybe he is dead, and now he's back to haunt him forever. Barnabas says that he has every intention of doing something to him in revenge for what he did — but not now. He tells him that he'll see him in court in the morning. 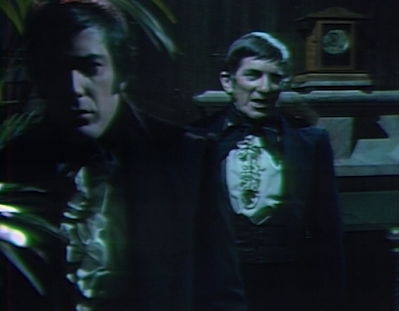 Dawson is pacing in the courtroom when Trask arrives. He asks him what's wrong. Trask says he won't appear on the stand. He refuses to be cross-examined. Dawson says his entire testimony will be tossed out. He asks Trask what he's frightened of. He says he will face Barnabas whether he likes it or not. 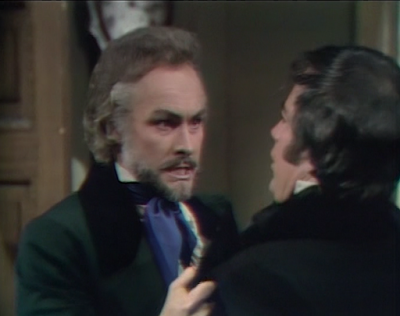 Barnabas comes to see Flora. She says they were so worried. She tells him they arrested Desmond for witchcraft. Barnabas says he plans to help Desmond as well as Quentin. He says when he proves Quentin's innocence, it will provide Desmond's as well. Barnabas asks her if Desmond told her he brought the severed head for Quentin. She says he did. Barnabas asks if it disappeared before Quentin got it. She says that as far as she knows, yes. He asks her who else saw the head. Flora says Leticia testified that she did. Barnabas points out that Gerard could have seen it, too. He says he suspects he's involved. He asks how Gerard and Trask became friends. She says they became friends the night they were discussing Trask's father's disappearance. Barnabas asks him to tell her everything about that night in as much detail as possible. 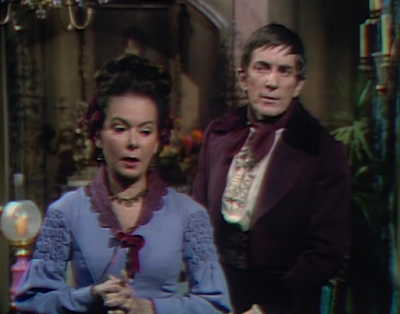 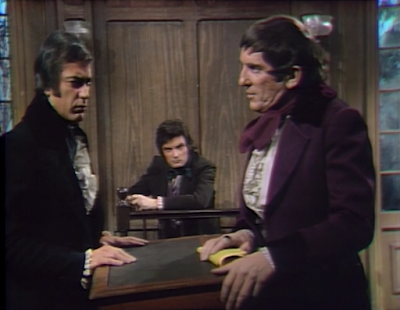 Dawson says the prosecution has not claimed that a seance constitutes an act of witchcraft. He says a means other than a seance to contact the dead does constitute witchcraft. Dawson asks if Trask knows of other examples of Quentin's powers over the dead. Trask says he witnessed such an incident. Quentin wrote a letter to a dead woman, Joanna Mills. He says he saw the spirit appear and leave a written response. He says he took the letter the spirit left behind. Dawson produces the letter. He admits a self-portrait of Joanna created when she was in an asylum, and points out that the signature matches the letter. He then submits Joanna's death certificate. Barnabas objects. Dawson says Trask saw the spirit deliver the letter, and therefore he moves that the court make a decision. Barnabas says the defense hasn't even presented their case. The tribunal says they are ready to render a decision. They are interrupted by a woman dressed in black. She claims to be Joanna Mills. 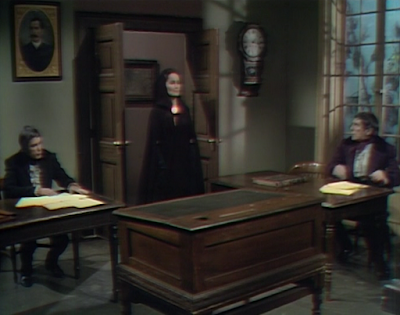 John: So much for Barnabas' arrival turning the tables! It looked like Trask was ready to break, but Dawson convinced him to take the stand, and before you know it, he's got the judges ready to render a judgment before the defense can even present their case!
Christine: I'm disappointed that we didn't get to see his amazing rescue by Angelique and Julia, and find out how he was revived so quickly after being near death. 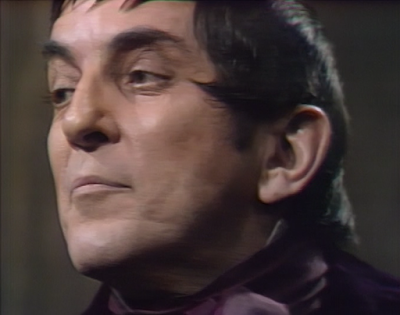 John: Meanwhile, Barnabas plays his little game with Trask outside of the courtroom, but keeps his own imprisonment a secret so he can torture him? That may be great for Barnabas, but it's not doing any favors for Quentin!
Christine: Do you think he'll find a place for Lamar next to his dear old dad in his basement? It looks like the show's resident artist has been put to work again, providing a sketch of Joanna so the judges would have confirmation of her identity before she appeared. 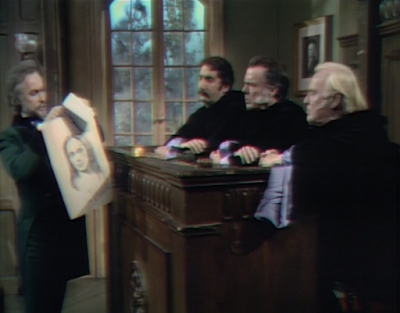 John: Well that's a horse of a different color. Do we think this Joanna is really alive? Or a dead woman appearing to testify on Quentin's behalf?
Christine: Of course it's Joanna! It's the oldest soap opera trope in the book! And of course we have the typical shocked faced zooms to bring a delightful end to our last full year on Dark Shadows. Happy New Year, everyone! 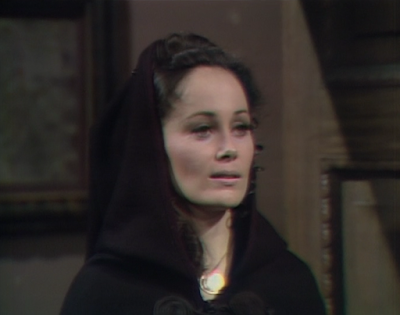 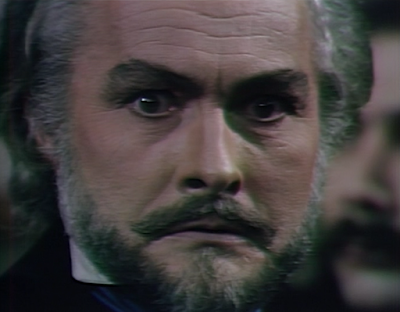 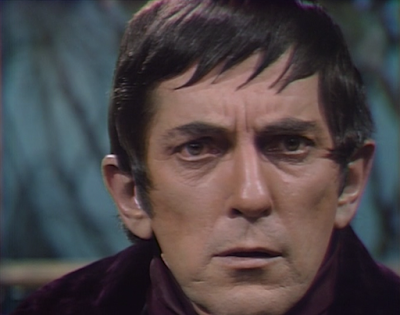 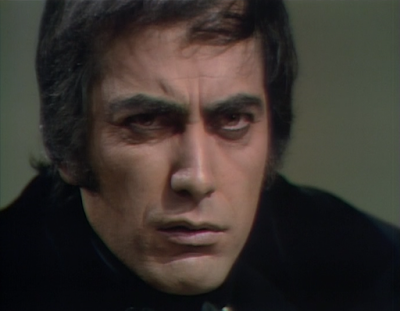 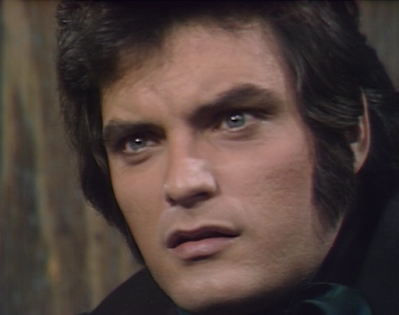