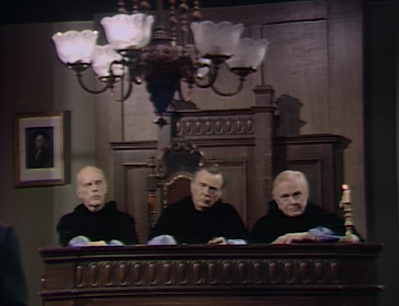 Samantha is asked by the tribunal to provide a specific incident, and she says that he has communicated with the dead, and brought a spirit into the house to terrorize them. Dawson asks her to explain, and she says she has seen it. Desmond points out that what she saw may very well have been a figment of her imagination. Samantha points out that Daphne has also seen the ghost, and has known of its existence for a very long time. Desmond objects, and is overruled. Dawson asks Samantha to identify Quentin's diary. He says that Quentin and Daphne summoned the spirit, and asks Samantha to read from the diary. She reads of Quentin describing the seance in which they contacted Joanna. Samantha describes seeing the spirit of a woman in Collinwood, and Dawson asks to call Daphne before allowing Desmond to cross-examine Samantha. 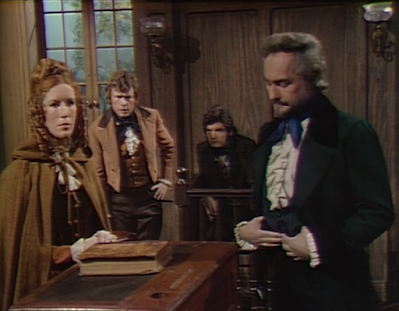 The  head of the tribunal reminds Desmond that this is not a normal trial, and allows Dawson to call Daphne to the stand. She refuses to testify against Quentin. She is told that she must testify, and reluctantly agrees. Dawson asks if she took part in the seance, and she says that she did. He asks whose idea the seance was, and she says it was Quentin's. He asks if Joanna's spirit appeared, and she says it did. He then asks why Quentin asked her to participate, but withdraws. Desmond asks Daphne what the purpose of the seance was. She says Quentin was upset by astral disturbances in the house. Objects were appearing in the house that belonged to Joanna. Desmond asks if Quentin felt haunted by someone in his past, and Daphne confirms that. Desmond points out the seance was an attempt to put the spirit to rest. Dawson objects. Desmond asks Daphne if Quentin was tortured, and she confirms that he was, and that's the only reason he held the seance. 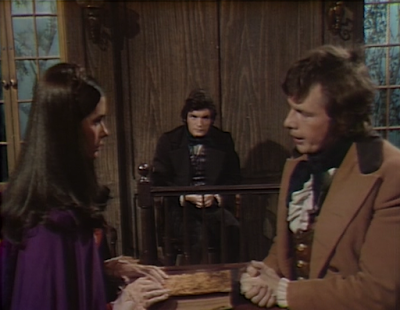 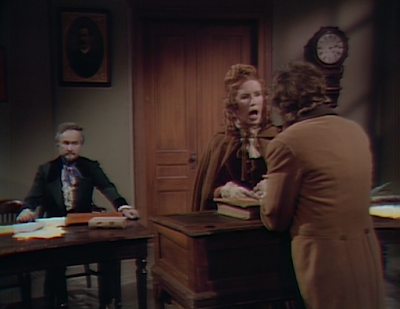 Dawson asks her why she thought Quentin was summoning the spirit. She says that Joanna was Quentin's mistress. He asks if she almost broke up their marriage, and says that he summoned Joanna to haunt Samantha. Desmond moves that as a prejudiced witness, Samantha's testimony should be stricken from the record. Dawson says he testimony is vital. Desmond says her testimony has nothing to do with the charge of witchcraft, pointing out that anyone can hold a seance to communicate with the dead. The tribunal agrees that Samantha's testimony will be stricken from the record. Dawson objects, and they say he may take exception, but not object. The tribunal is adjourned until Monday morning. 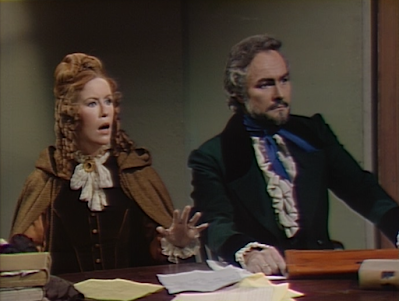 Samantha is pacing in the drawing room when Daphne returns. She asks Daphne if she stopped by the jail to see her lover. She says that Quentin is not her lover, and Samantha says it's just a matter of time. She tells her that she's wasting her time, because Quentin will be found guilty and beheaded. Daphne asks how she can live with herself. She asks what she's going to tell Tad. Samantha says that Tad will understand. Daphne accuses her of arranging to be subpoenaed to testify. Samantha fires her, effective immediately. Daphne says she doesn't hate her; she just feels sorry for her. 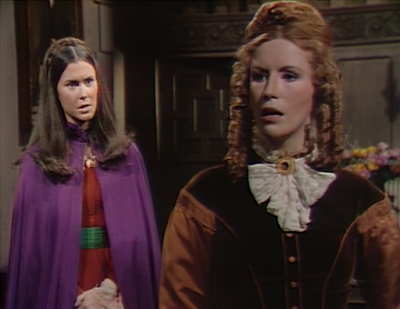 Quentin tells Desmond he did a good job. Desmond reminds him that it's not over, yet. Quentin says he's going to talk to Gerard later, and Desmond points out that Dawson's efforts to skewer him were at the behest of Gerard. Samantha arrives at the jail and tells Quentin that she has dismissed Daphne as Tad's governess. She reminds him that he's not the master of Collinwood. He tells her that he's going to have a long talk with Gerard, and Daphne will stay at Collinwood. She tells him that Tad is her only concern, and she doesn't want Daphne around him. 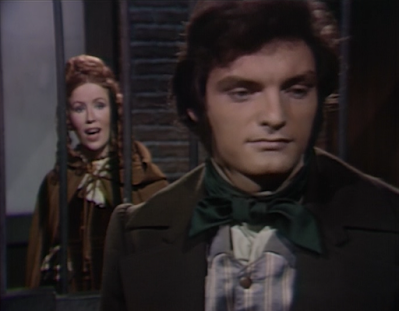 Daphne is reading a book in the drawing room when she nods off and dreams. She's in a beautiful room, but she can't find Gerard. She goes looking for him. She wakes, and can't remember the dream. She realized there was a room in her dream she had never seen before, and she goes looking for it. She finds a room with the dress she was wearing lying on the bed. 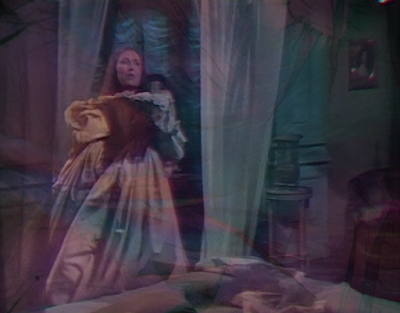 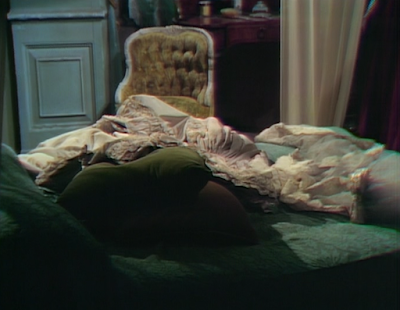 John: Once again, Dawson rules the courtroom! He's changing the rules to fit his needs, which makes it seem like Quentin doesn't stand a chance.
Christine: I was hoping for the Perry Mason moment when Samantha would be compelled to confess that she pretended she was the ghost of Joanna to interfere with her husband's philandering, with the added benefit of helping to have him convicted of witchcraft. Unfortunately, Desmond is no Perry Mason.
John: I have to admit, I was surprised to see Samantha's testimony tossed out. It was beginning to look like the tribunal was going rail-road Quentin right to the guillotine!
Christine: I'd prefer the railroading so this trial doesn't have to last longer than it should. Hopefully, we'll see Quentin's head on the chopping block by Friday.
John: What's with the Reader's Digest condensed dream sequences? Remember the good old days when dreams and curses lingered for weeks at a time?
Christine: I almost regretted that we hadn't started the Daphne dream tracker, though there does seem to be little point in recording such foolishness. Her dreams are all about wedding dresses and making out with Gerard.
Posted by John Scoleri at 6:00 AM