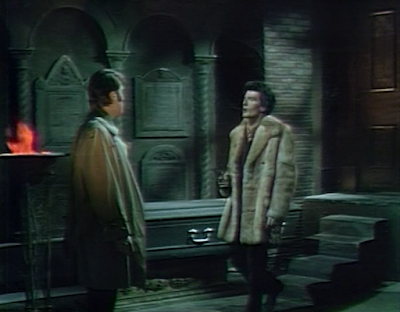 Bruno forces Chris into a crypt in the Eagle Hill Cemetery at gunpoint. Chris asks why he brought him there, and Bruno says he's got suspicions about Chris, and he'll find out if they're true within the next 24 hours once the moon rises. Bruno asks if the thought of a full moon frightens him. Chris tells Bruno that he's crazy. Bruno tells him that if nothing happens to him when the moon rises, Chris will be a free man. And if something does happen, he'll be forced to kill him. 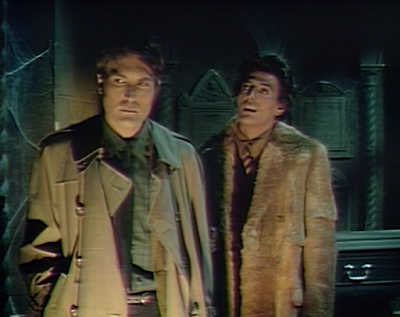 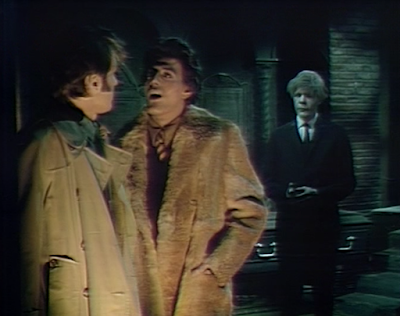 Jeb is on the phone complaining about something. Bruno enters and Jeb asks him why it took him three hours to get information. Bruno says that other things happened that he needs to tell him about. Jeb asks if the things in David's room are real. Bruno says he almost got killed there. He goes to show Jeb the noose that was around his neck, but it has disappeared from his bag. Jeb says the spirit of Paul Stoddard is trying to get them from beyond the grave. Bruno suggests they talk to Blair, and Jeb refuses. 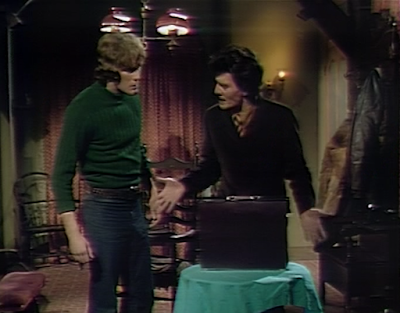 Jeb asks Bruno why he's looking at him like he's afraid. Bruno asks if he is. Jeb grabs him and tells him he's not afraid of anything. He reminds him who is the leader, and who is the follower. Bruno tells him nobody does that to him, and punches Jeb in the face. They struggle, and Jeb tells Bruno that he only keeps him because he has guts. Jeb asks him who leads, and Bruno tells Jeb that he does, and that he follows. 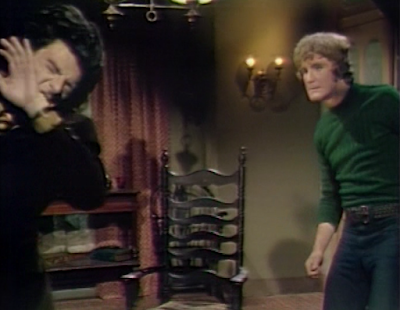 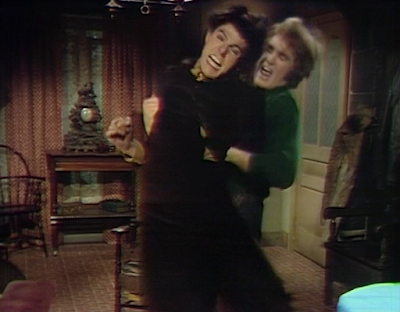 Jeb tells him to remember that if he wants to stay alive. Jeb then asks Bruno about what happened after Collinwood. Bruno says the girl he rescued from the werewolf was in Collinwood, and he took her back to town. Jeb asks if she knows anything about the werewolf, and Bruno says he's convinced she doesn't know a thing. Jeb asks if he's soft on her. Bruno asks Jeb about his next move. Jeb says he's going to see David in the morning to see if he remembers how to deal with spirits of the dead from the book. He leaves, and Bruno thinks about how he can deal with Jeb. 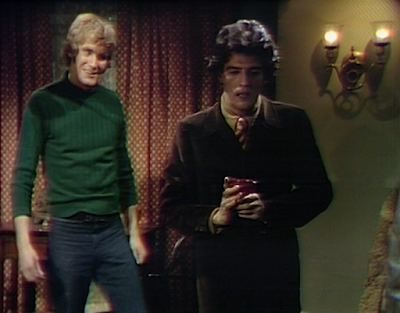 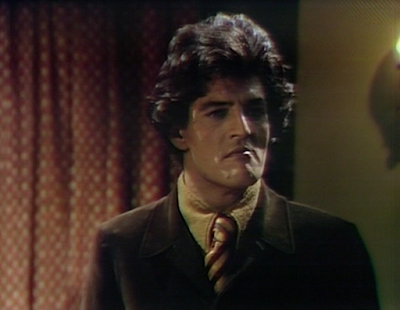 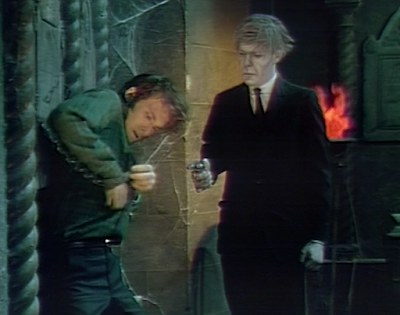 Jeb enters Collinwood, and Roger stops him, suggesting that it's polite to knock. Jeb says Elizabeth offered him free reign of the house. Roger asks why he's there, and Jeb says he's come to see David, to show him some photographs. Roger tells Jeb that if he doesn't like his son's choice of friends, he can do something about it. He forbids Jeb from seeing him. Jeb tells Roger that he doesn't know how he's going to stop him. 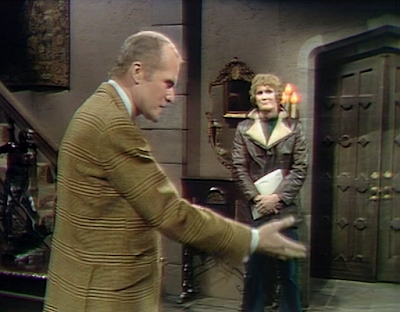 He goes upstairs, and Roger makes a phone call to Quentin. He says he's just had his first and last run-in with Jeb. He says he's going to have Jeb run out of Collinwood. He hangs up and finds Jeb standing in the doorway. He asks Roger if he's wondering how much he heard. Roger says he doesn't care. Jeb says if he was talking to Quentin, he knows more than he thought he did. He tells Roger that what he's heard about him is true. He asks Roger how he would feel if something happened to his son, or his sister. He tells him not to mess with him, and leaves the house. Roger calls Quentin back. 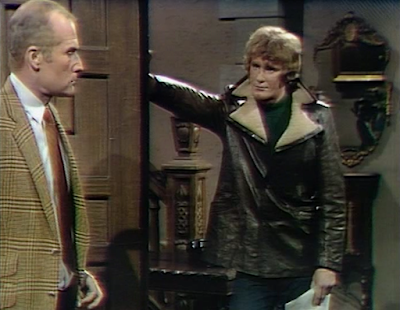 Bruno sits by the fire, thinking that he's smarter than Jeb, and he was born to lead, not follow. He's glad he didn't tell Jeb about the werewolf. He realizes that if anything happens to Jeb, Blair will have to appoint a new leader, and who better than him. Jeb comes in as Bruno puts on his coat. Jeb says he wants to talk to him. He tells Bruno he just put Roger in his place, but he's worried about the spirit. He says he has decided the spirit is not Paul Stoddard. Bruno says he's got to prepare for the werewolf. Jeb says he's got plenty of time, and tells him that he doesn't leave until he tells him to. 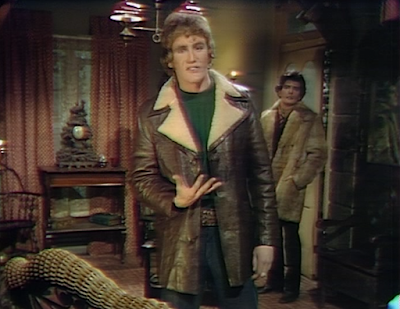 Davenport approaches Chris and tells him it's almost time. He says he couldn't disobey his orders even if he wanted to. Chris asks him what he's got to lose. Davenport steps outside the crypt and looks up at the full moon. He comes back inside as Chris screams in agony. His hand changes, and Davenport raises the gun. 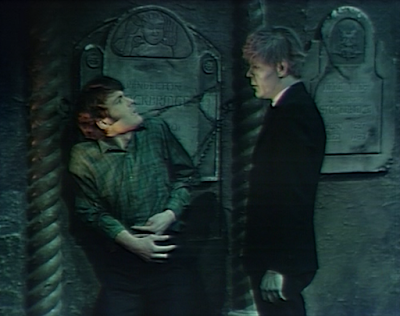 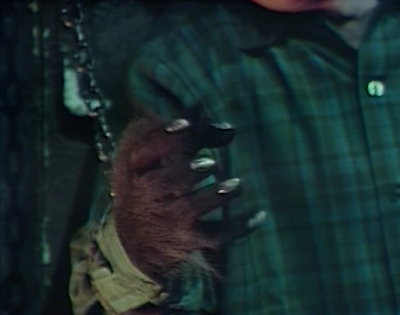 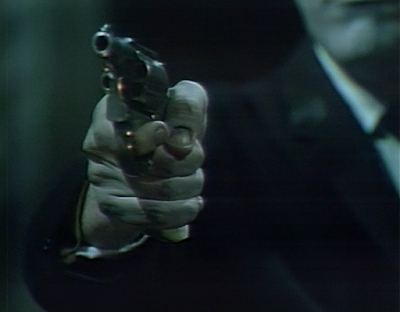 John: Ah, poor Bruno's feelings got hurt. I'm surprised that Jeb let him live after he took a poke at him. Of course it would only be fitting for one of Jeb's own to turn on him and unleash the werewolf to do away with him. 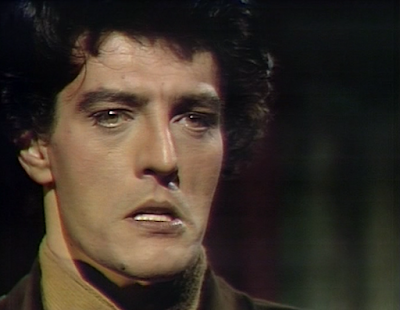 Christine: He's certainly a fickle follower. Their wrestling match was a delight to watch. 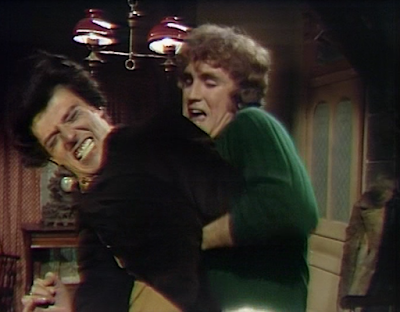 John: Why exactly would there be chains installed on the wall in a crypt? I am really enjoying the Adventures of Zombie Sheriff Davenport, though I wonder where he hangs out when Bruno isn't employing him. Great potential for a spin-off series! I do hope we get a zombie-werewolf tussle tomorrow... 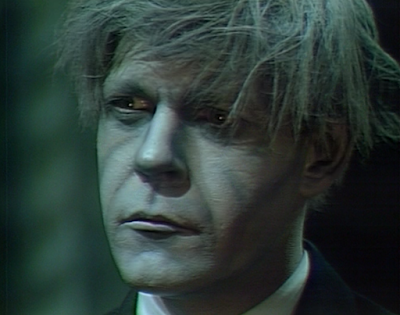 Christine: He's probably a barfly at the Blue Whale. Davenport's corpse appears to be ripening. Let's hope if there is a tussle, he'll get some gashes added to his visage. It looks like Chris is being held in the Stockbridge crypt that Vicki visited with Frank Garner in Episode 154, since Chris is being chained in front of E. Pendleton Stockbridge's resting place and the architecture appears to be the same. You may recall the lovable Caretaker of the crypt saying that all the Stockbridge family members who died a violent death were in the crypt, so perhaps that has something to do with why the manacles are in there. 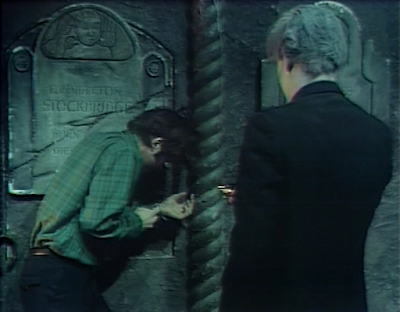 John: Jeb goes to see David, has a run-in with Roger, and can't possibly have met with David in the time he was there. Do you think he forgot why he went to Collinwood in the first place?

Christine: You know how pissy Jeb gets when anyone questions his authority or threatens him. He thrives on conflict and takes pleasure in asserting his dominance over others, so I'm pretty sure he forgot all about why he went there.