Julia leaves the tower room and sees the silhouette of a figure. She asks who it is, and it disappears. 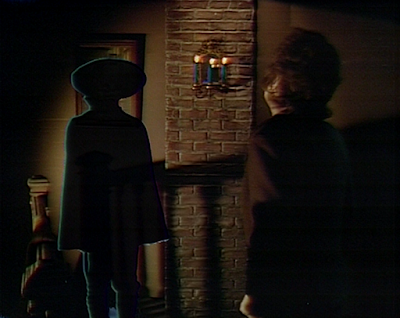 In the drawing room, Julia tells Quentin that she saw a caped figure in the tower room. Elizabeth comes in and asks what they're conspiring about. Julia asks her when Maggie will be back. Elizabeth says she said she'd be back as soon as she settles her family situation. She leaves, and Quentin says that yesterday Elizabeth tried to kill Maggie, and now she lies about wanting her back. Julia describes Collinwood as a house of lies. Quentin says he's got years of experience. 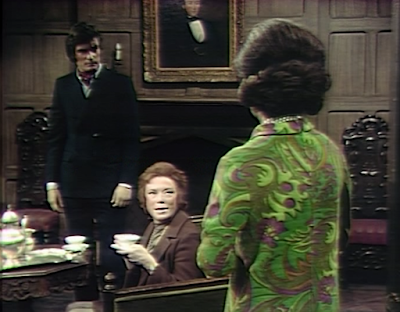 Roger comes in and mentions his surprise that Maggie is gone. He then sees Quentin, and says he's come back. Quentin explains that he's not a ghost of Quentin, but his descendant. Roger introduces himself, and says the old Quentin was cruel, terrifying, perhaps even murderous; and he's fascinated by him. Amy listens to them from the foyer. Quentin tells Roger that he disappeared when he was very young, only living with his great grandmother for a short time. Roger says he left behind a remarkable resemblance. 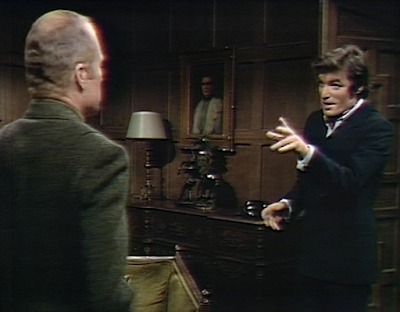 Julia comes in with coffee, and Roger suggests she could fill him in on Quentin's history. Suddenly, Quentin's music begins to play, and he is surprised. Roger asks Quentin what has frightened him. He says it's as if the music startled him. 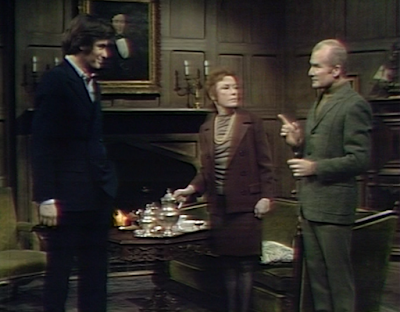 Amy comes in and asks Quentin if he likes the music she's playing. Roger asks Amy what she's up to. She says she's just playing an old-timey record. She says that all the people who first listened to it are dead now. She asks Quentin again if he likes it, and he tells her he likes it very much. She offers to play it again, and Roger tells her not to. He takes her out and says he'll find her a good book to read. Quentin tells Julia that Amy knows who he is. Julia assures him that no one can prove his true identity. 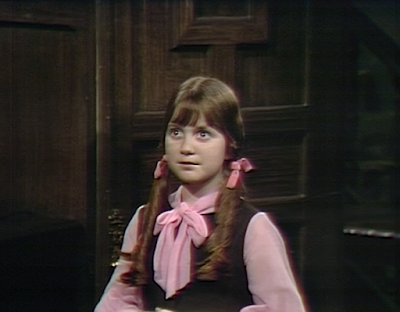 Amy tells David that the music surprised Quentin, and that he's the same one as before. She says Jeb will protect them. David tells her that Jeb is frightened of something and he has to find out what so he can protect him. He says he needs the book and asks Amy to bring it to him. She pulls it off a top shelf behind a picture. He flips through it, hoping it has the answers he seeks. 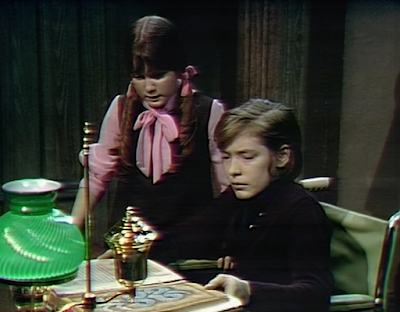 Elizabeth talks to Jeb on the phone, suggesting that they need Roger to join them. Roger comes into the room as Elizabeth hangs up on him. Roger asks who she was talking to, and she says she was talking to Jeb about the carriage house. Roger isn't happy with him staying there, since he's a stranger. She says Carolyn likes him, and Roger says that he's not good enough for her. 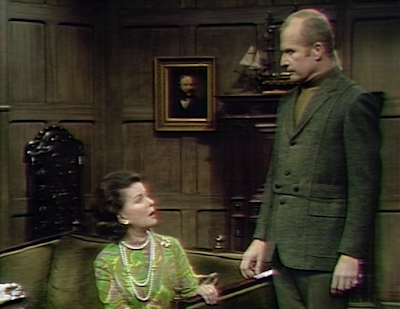 Roger then asks Elizabeth why Megan is staying in Collinwood, considering her husband is accused of murdering Paul Stoddard. He says she'll ruin the house and should be sent away. He reminds her that his body was taken by someone. She says she hates to even think about it. Roger tells her that she, David and Amy have all changed, and he's going to find out what's going on in the house. 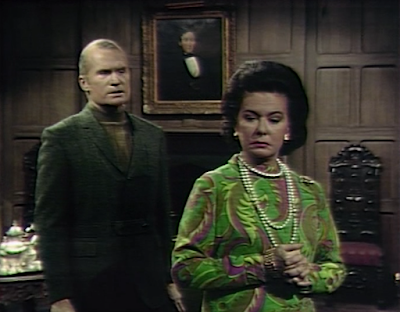 David finds what he's looking for in the book. He says if the spirit of a dead enemy manifests itself, there is a way to dispel its presence. The lights go out, and he asks Amy to bring a candle. She does, and after he lights it, a wind blows it out. David says there's a presence in the room from beyond the grave. Amy is frightened. David tells her to bring him a flashlight. He continues reading, but the book is swept off the table. He tells Amy to get it for him. She goes to pick it up and it catches fire. They watch it burn. David points out that whatever was there is not gone. The lights come back on, and Amy asks what they'll do without the book. David says he doesn't know. 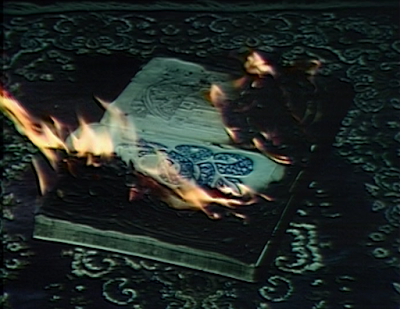 Quentin is in the old house when Roger comes to see Barnabas. He says he's not there. Roger says he'll keep walking and Quentin asks what's troubling him. Roger agrees to stay, and says it might help talking to him. As a family member and a stranger, he might offer a clear perspective. Roger says everything seems strange to him. His sister, his son... he says there's some enormous horror he can't understand. Quentin has him sit down. He says he's going to tell him an incredible story that may cost Roger his life. 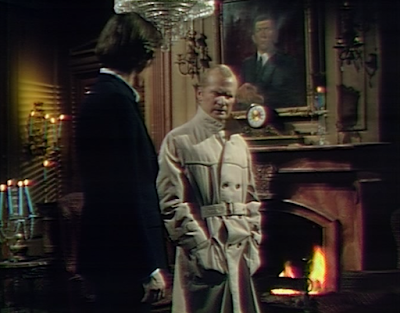 Elizabeth tries to call Jeb, but he doesn't answer. David tells her that it's important that they find him. Elizabeth heads out to look for him. 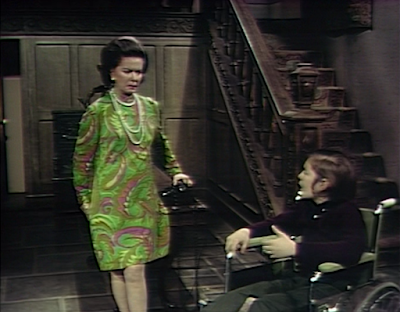 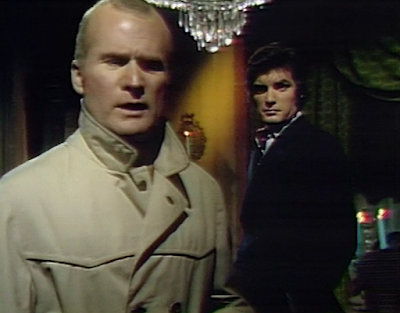 David is up in his room, wishing Jeb were there. The lights go out again. A chill comes over him, and he realizes that the spirit has come back. He calls out asking who it is. The door swings open, and a body is hanging from the rafters outside his door. 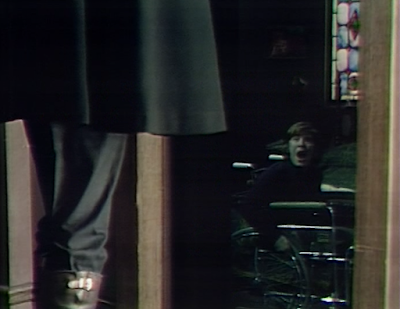 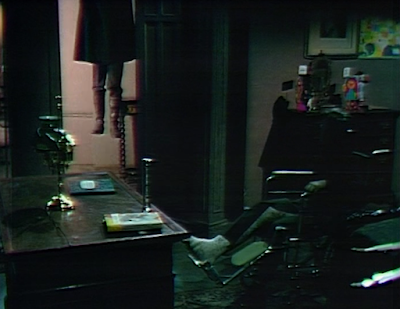 John: So the terror of Collinwood that scared Jeb was Father Guido Sarducci? Once again, my hopes of seeing the unseen creature are dashed by a less than impressive visual effect...

Christine: The last time we thought we saw Father Guido Sarducci was in Episode 429 in the form of Reverend Trask. I was thinking it could be the spirit of Gregory Trask, who was walled up at Collinwood in Episode 879, but since he did not die by hanging, it must be someone else.

John: I was wondering just how much Quentin was going to divulge to Roger... including his own sordid history. But I guess he just limited his tale to the Leviathans, which Roger seemed to swallow without the slightest bit of hesitation. Roger has come a long way from the man who would deny what he saw with his own eyes.

Christine: He certainly has come a long way when he thinks that David telling lies and disobeying him is a strange occurrence. I thought it was funny that David asked Amy to light a candle to read the book when he had a flashlight available all along. He sure seems to mine a lot of different information from the same page he reads every time he opens the Leviathan book. 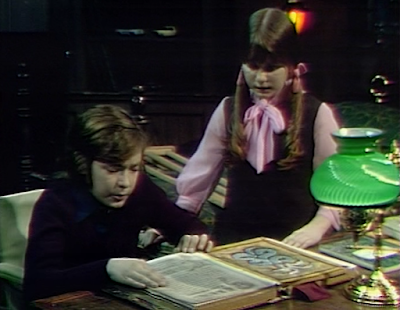 John: Do you think the hanging man is the evil spirit who Jeb leveraged to summon the bat from hell? I think it's safe to say the smiling face of Paul Stoddard isn't on the end of the swinging rope.

Christine: It could be. The only other characters I can recall who have died by hanging are Victoria Winters and Peter Bradford, though I'd say those boots look a lot like Bradford's to me. 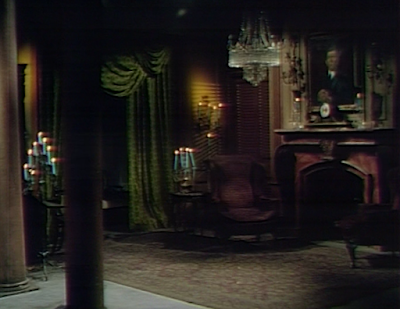