Barnabas takes the Leviathan box back to the altar. He calls to the spirits, saying that he no longer needs them. He says his days will be spent ridding the world of the Leviathans. He prepares to smash the box with his cane when it opens on its own, revealing a bat inside. The bat bites him on the neck. 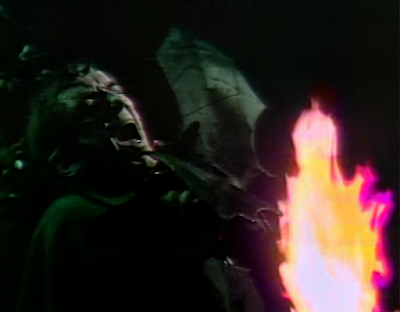 Jeb stands over Barnabas, unconscious with two bite marks on his neck. He tells Barnabas that he was warned, and calls him a traitor. He says he's doomed to a life of eternal darkness. He takes the Leviathan box and calls to his parental spirits. He says he knows he did what he did without their permission, but now the Leviathans will live on. He leaves, and Barnabas rises. He feels his neck and cries out in anguish. 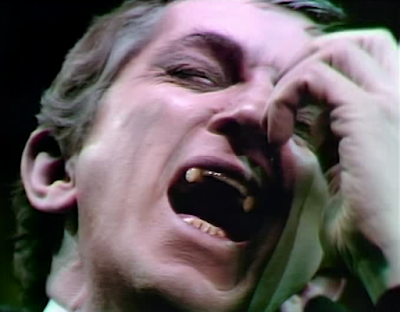 Quentin sees Jeb return to the antique shop with the Leviathan box. He grabs Jeb and asks him where Barnabas is. He sees the box in Jeb's hands and asks if he's killed him. Quentin demands that he tell him where Barnabas is. He takes off his coat and the two men fight. Jeb pulls a knife on him and tells him to let him go, unless he wants his friend to find his body there. He says they'll meet again, and he goes into the shop. 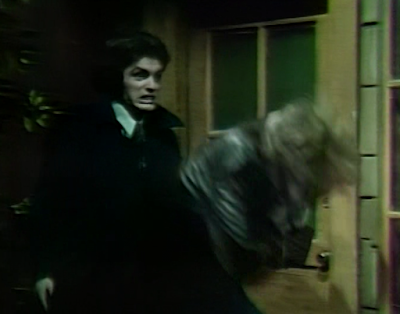 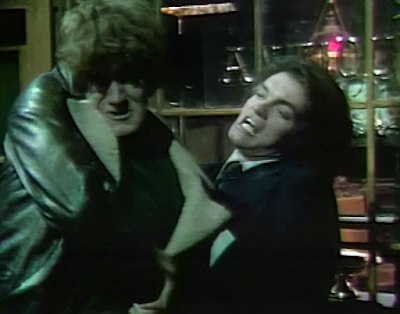 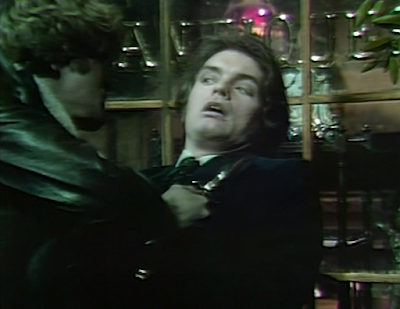 Julia says that if Jeb told Quentin that his friend would find his body, that must mean Barnabas is still alive. She says she knows what Jeb has done. Quentin asks if that means he's a vampire? She cries. Quentin tells her that they've got to find him. She asks if he knew where Barnabas was going to destroy the box. He said he assumed it would be someplace special to the Leviathans. She says he saw an altar in the woods... that must be where he is. 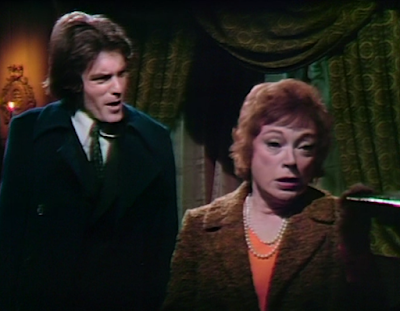 Barnabas stands outside of Collinwood, looking up at Maggie's window. He realizes that he must have blood, and Maggie will at last be his. 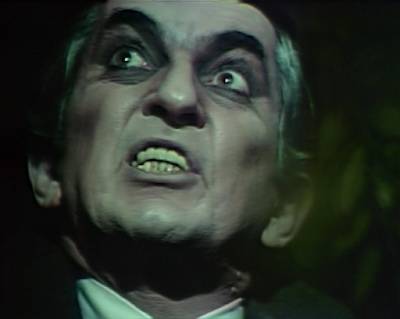 He starts inside, and wonders if he can harm Maggie. He realizes that he must not, and leaves. 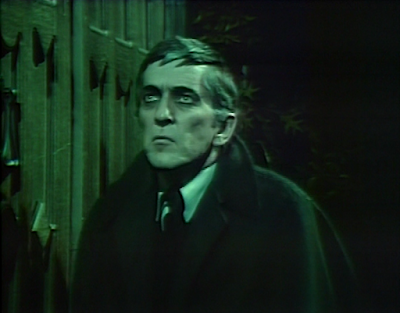 Barnabas sits before a full glass of wine at The Blue Whale. A stranger comes in asking where the antique shop is. Barnabas suggests that she go to the Collinsport Inn, which is nearby... He says, "The Naga," and she asks if he knows it, and he says he knows the Todd's and Jeb Hawkes. She asks what he's like. He invites her to join him for a glass of wine, since they have a lot in common, and she does. She asks if he's one of theme, and he introduces himself. She says she is Nelle Gunston from Virginia. She asks what Jeb is like, and he says she'll find out soon enough. She says she met a man named Bruno who told her all about it, and gave her the Naga necklace. Julia and Quentin arrive. They say they were worried about him. He introduces them to Nelle, and says he's busy right now. 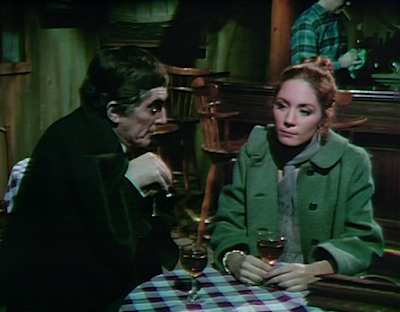 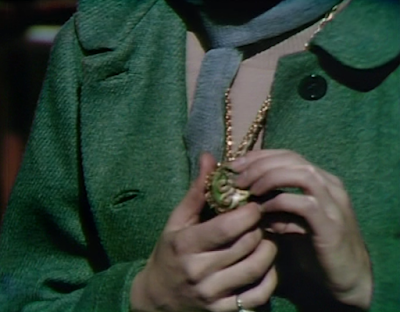 Quentin gets Julia a drink. She asks Quentin if he saw the Naga necklace on Nelle. Quentin says Barnabas looks different. 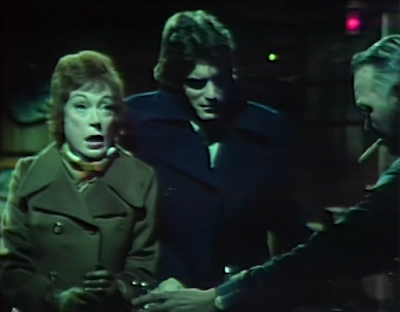 Nelle tells Barnabas to take her to the shop. He says that Jeb's not there, but he knows where he is, and he will take her to him. They leave together. 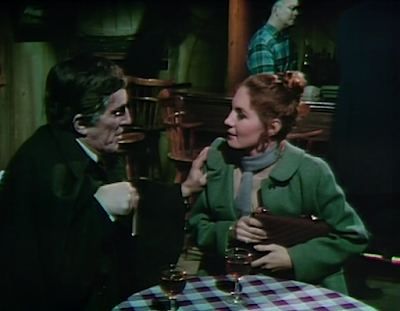 As they watch him leave, Julia asks Quentin what could have happened to Barnabas.

Barnabas brings Nelle to the old house. She asks where Jeb is, and he says that he must be late. She points out that he doesn't wear any Leviathan signs. He tells her that he brought the box, and doesn't need to prove anything. He tells her that she's very attractive. She says she doesn't believe Jeb is coming. He asks her what Bruno told her to convince her to join them. He asks her how Bruno became one. She tells him to ask Bruno. He says he's asking her, and she says a Mr. Strak brought him in. She asks for a drink. He asks for her forgiveness for asking so many questions. She says a lot of people want to know, including the wrong people. As he fixes her drink, she pulls a knife and threatens to stab him. He turns and tells her to drop it. She does. He says he's not one of them, and says he'll show her what he is. He bares his fangs. She backs away but he grabs her. She says they'll get him for his, and he bites her neck. 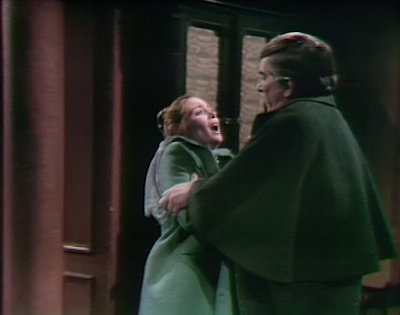 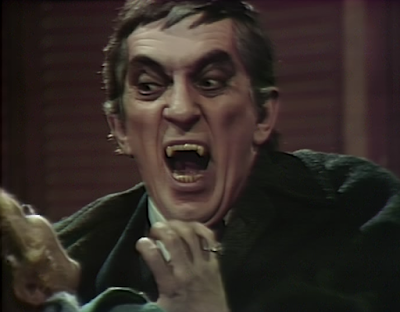 Julia and Barnabas arrive at the old house to find him standing over the woman from the bar's dead body. He says he had to do it. Julia says she's been strangled. Barnabas says she came to join the Leviathans. Quentin says they have to remove the body, and asks what Jeb did to him. Julia reveals a wound on the woman's neck, and Barnabas tells them that they found out he was a traitor and punished him. 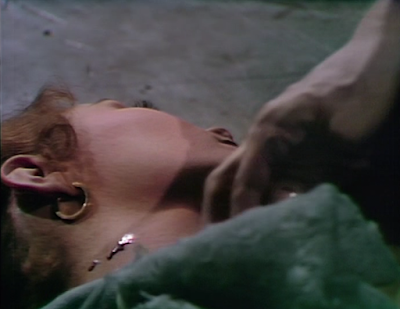 Julia says they can start the treatment right away. Barnabas says he will go to Jeb tonight, and ensure that he never changes again. He leaves, and Julia says Quentin needs to bury the woman in the woods. He says he'd prefer to bring her body to the antique shop to find her there. She says that will lead the authorities to Barnabas. She says they will have to protect him, as the Leviathans will come to kill him during the day. She says she'll have to get Willie Loomis to protect him. She says Jeb will learn he made the biggest mistake of his life tonight. 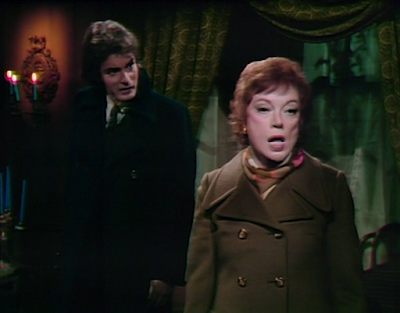 Jeb is on the phone with Megan, who is at the police station to see Philip. He hangs up and takes the Leviathan box upstairs. Barnabas lurks outside the antique shop.

Jeb goes into his room and locks the door. The labored breathing can be heard behind the door.

Barnabas enters the antique shop and goes upstairs. Outside the door, he hears the breathing. He goes downstairs and throws gasoline throughout the shop. He takes a match and lights the room on fire. He leaves the antique shop engulfed in flames. 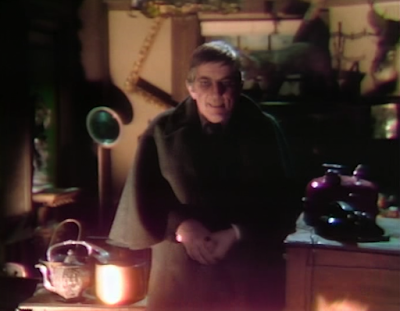 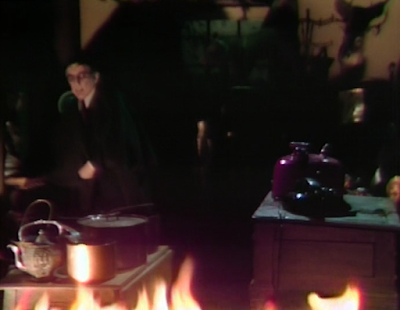 John: Why didn't Quentin follow Jeb inside to continue the fight? Was he really afraid that Jeb might cut him? He seemed so ready to throw down when he removed his coat. It sounded like the Leviathan box was getting kicked around during their scuffle—it would have been funny if they had fallen on it and broken it!

Christine: He probably realized at that point that it was more important to make sure Barnabas was safe than to claim the title of alpha male.

John: It's been a while since a red-shirt was introduced in the show. I'm surprised they gave Nelle a first AND last name, when she just as easily could have been labeled 'vampire snack' in the script.

Christine: You are forgetting investigator Lawrence Guthrie, who showed up just last week only to be quickly dispatched by Jeb in Leviathan form. Barnabas proves that Jeb made a mistake in making him a vampire as he takes out the first in what could be a long line of Leviathan supporters willing to kill for the cause.

John: They really went overboard on the make-up so it was clear Barnabas was in full-on vampire mode today. Of course, despite their having made the connection of what Jeb had done to him, when they found him in The Blue Whale, they seemed to have forgotten. Quentin points out that he looks different, but that's it. And then when they find him over the dead woman's body in the old house, Julia's first diagnosis was death by strangling. Really? How does one forget that a friend has a nasty history of vampirism?

Christine: I think they were reluctant to believe that the worst had happened. Great to see Bartender Bob Rooney return to tend bar at the Blue Whale for one last appearance today. Too bad he wasn't able to get the juke box to play some of those familiar Bob Cobert Blue Whale tunes to bring back fond memories of the early days on Dark Shadows. It sounds like Willie Loomis will be returning to his old job as vampire servant to Barnabas. If only they could get Vicki to come back, it would be like old times again. 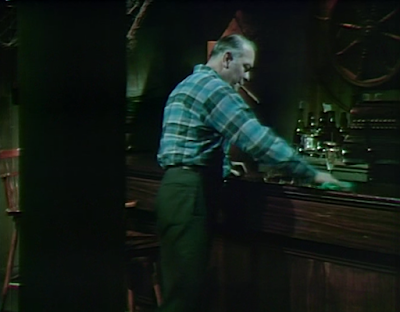 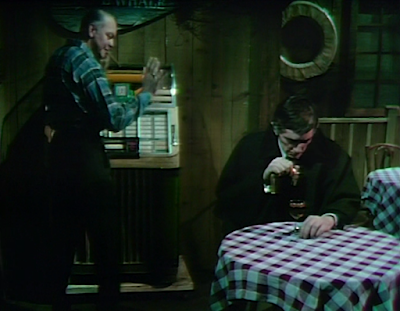