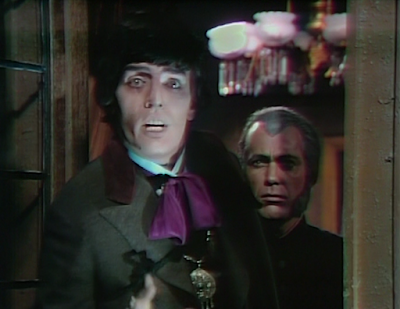 Judith is coming downstairs when she hears Aristede mention that Evan has been murdered.

Aristede says he saw Blackwood kill Evan with his chain. Trask says they have to put his plan in operation, then he will be able to get away. Aristede says Blackwood is a monster from hell. Trask tells Aristede that he will hide him. 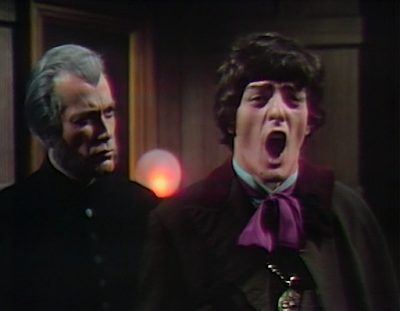 Judith calls Tim and says she must see him. She says she'll be at his hotel room in half an hour.

Judith arrives to see Tim. She says that Evan has been murdered. Tim asks by whom, and she says she doesn't know, but he appeared to have many enemies. She says Evan told her that Tim hates Trask, and agreed to help find out where Trask travels to. Tim says he goes to Fall River, and asks if she's sure she wants to hear his story. She says she does. He mentions a widow of a minister that he has been seeing. The woman knew that Minerva was dead, but not that he remarried Judith. He says the woman killed herself when she discovered the truth. Judith says that Trask will cause no more deaths. She enlists Tim's help in her plan. 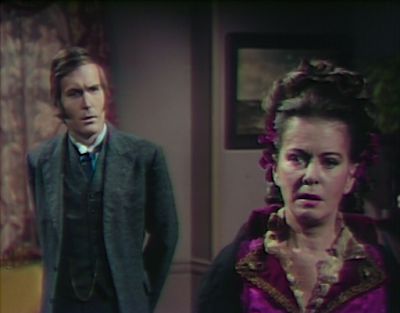 Trask tells Aristede that Judith is gone, and suggests that he can hide behind the draperies in her room. He asks him to take her jewelry to make it look like a robbery after he deals with her. Trask gives Aristede a gun to kill her with. He adds that if he succeeds, Blackwood's ghost will disappear. 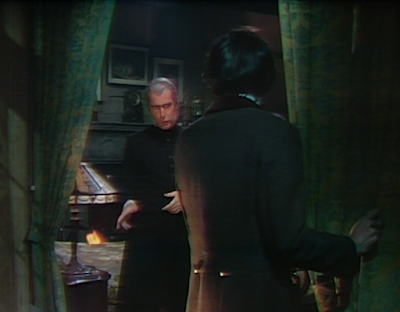 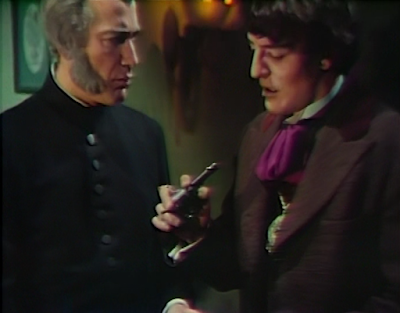 Trask hears Judith's coach approaching. He goes into the drawing room and picks up a book. When Judith arrives, he tells her there's a madman loose in the area, and Evan has been killed. She says she knows, and that she was in the village preparing a surprise for him. He says he has found peace with her, and will be content to grow old with her. He suggests that she go upstairs to rest. She tells him to finish his reading in the study, and she will finish her correspondence. 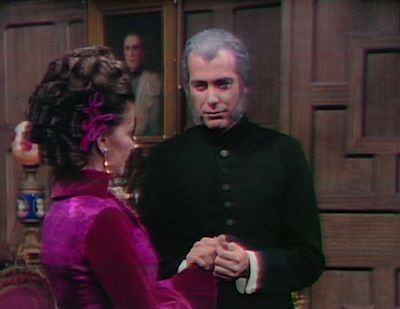 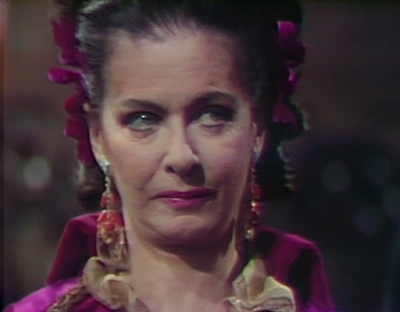 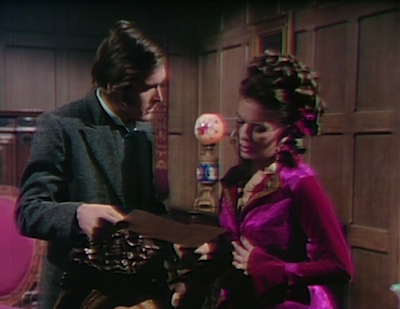 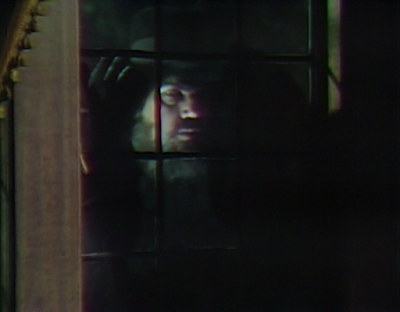 Judith returns to her room. Aristede remains behind the curtains with his gun drawn. 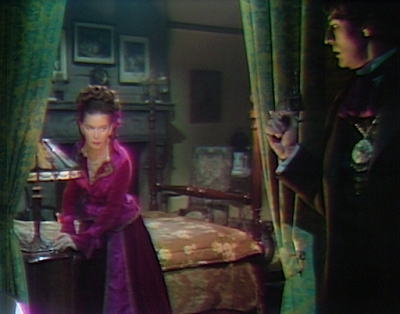 Blackwood enters the house and begins searching for Aristede. 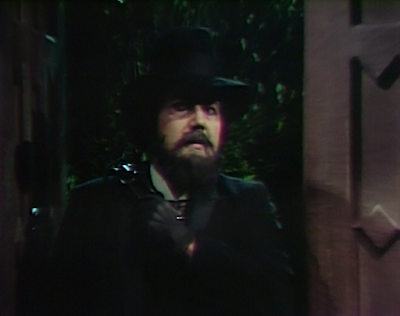 Aristede comes out from behind the curtain and points the gun at Judith. She asks who he is. He says he has come to kill her, when he suddenly hears chains. 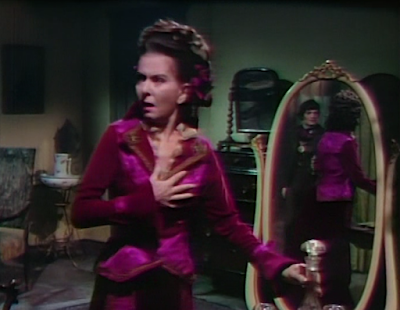 Blackwood opens the door and tells Aristede that he learns little. He swings the chains at him and says it's too late for excuses. He says justice must be done as he approaches him with the chains. Aristede leaps out the window, and Blackwood says he shall not escape. 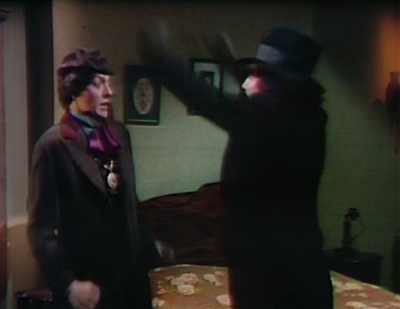 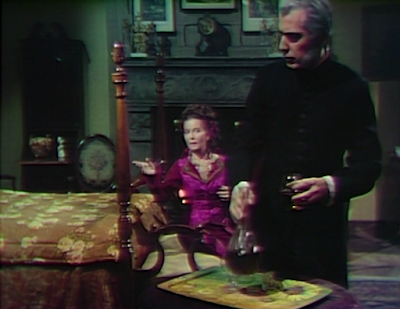 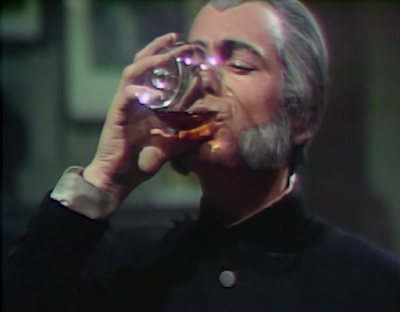 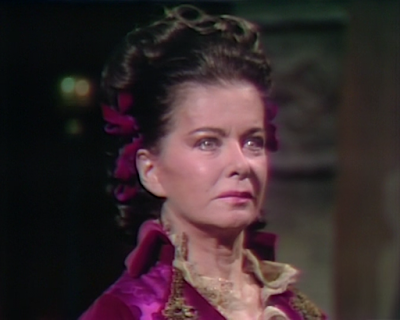 After drinking his, he notices that she didn't drink hers. Trask feels strange, and asks her what's happening to him as he collapses. Tim comes into the room. She says Trask tried to have her killed, and tells him they will now go through with their plans. 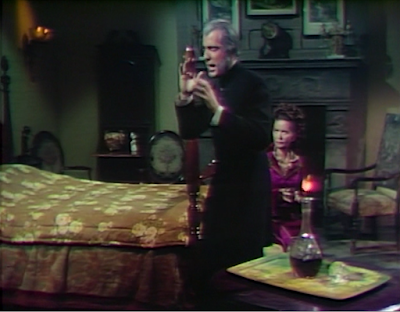 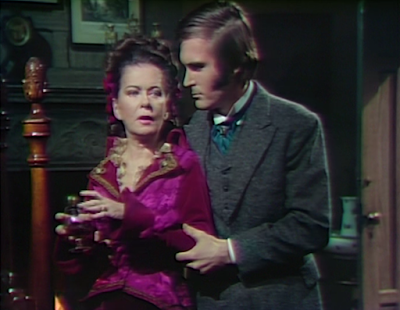 Trask is unconscious in a chair. He wakes and finds himself in Quentin's room. He tries to leave, but the door is locked. Tim comes out and says he's there to bid him a final goodnight. Tim pulls a gun on him. Trask asks what's happening. Tim says that Trask and Evan made him kill Minerva. He unlocks the door and leaves the room. He locks Trask inside. 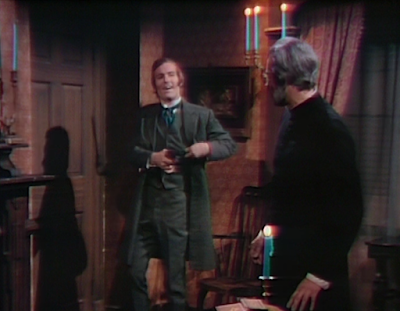 Judith calls the sheriff, saying that two men were in the house and her husband went after them.

Outside the door, Trask hears something. He searches the room for another key. He finds one, but when he unlocks the door he sees that it has been bricked up, except for a hole at eye level. Judith says goodbye, and tells him he can have all the time he wants to meditate. Tim places the last bricks in place as Trask screams. 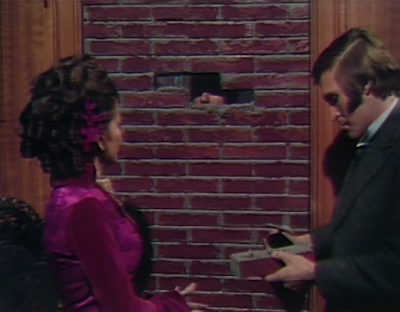 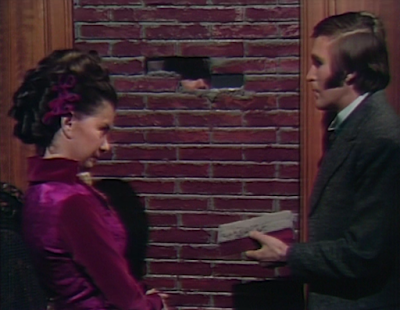 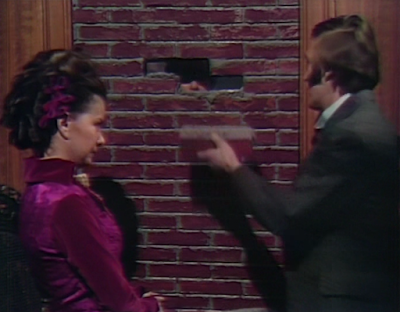 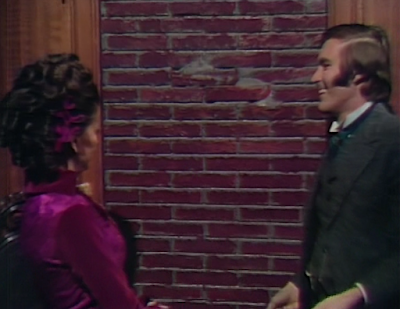 John: Wouldn't it be cool if we found out that wide-eyed Aristede was in fact the source of the wide-eyed skull that pops up so often in Collinwood? 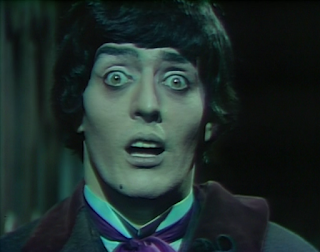 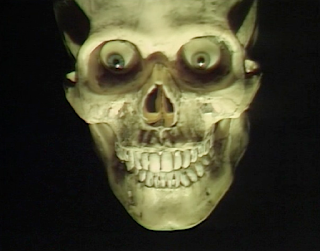 Christine: There is an uncanny resemblance!

John: Why exactly would Tim confess to the murder of Minerva? Did he think Judith was looking for work experience when coming to see him about her plans?

Christine: I think he had to prove that he would be willing to do something equally despicable to satisfy his desire for revenge and ensure that it would be something he'd keep secret.

John: It sure seems like they're settling all family business in Collinwood, 1897... I had to laugh how quickly Tim bricked up the doorway with Trask inside (a fate deserved of all Trasks). If only Trask had thought to throw his body against the newly constructed wall before the mortar had dried. At least the riddle of whose skeleton was in Quentin's bedroom has been answered. I hope we'll get a scene of Judith explaining to Quentin when he returns home just why she had the room bricked shut...

Christine: They've got 40 rooms in that place. You'd think they could have found an unused room to seal him up in. I also would like to see how Quentin reacts to being walled out of his room, but wonder if Judith will divulge the real reason why she did it. I guess Tim Shaw is good for something after all. Not only is he now an accomplished detective, he can do bricklaying in record time! Overall, this was a satisfying episode, and it's not even Friday yet!