Carolyn hears her mother's voice telling her she's in danger. The werewolf gets closer to her. Her mother pleads for her to get back to Collinwood. 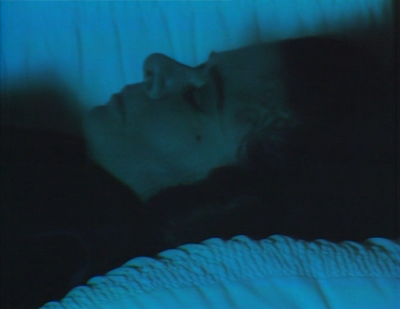 Carolyn stands at the front door to Collinwood. While her mother begs her to go inside, the werewolf appears. 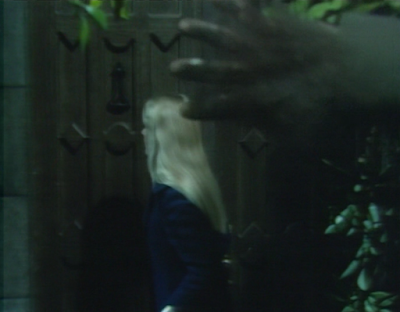 Julia opens the door and the werewolf runs away. She tells Julia that the cottage is a mess, and Julia says Chris can take care of himself. Carolyn tells Julia that she heard her mother's voice, and Julia replies that it's all in her mind. Carolyn says she's going to the mausoleum. Julia offers to get Barnabas to go with her, but she leaves alone. 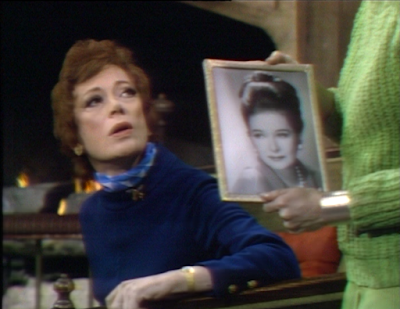 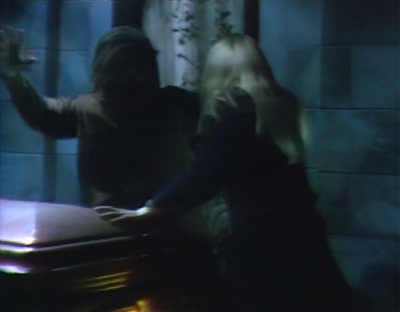 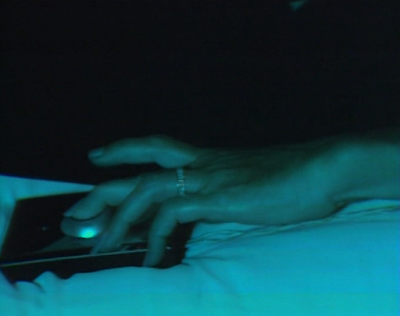 Back at Collinwood, Julia and Barnabas hear the bells.

The werewolf notices a silver bracelet on Carolyn, and steps back. Julia and Barnabas arrive, and Barnabas proceeds to beat the werewolf with his silver-headed cane. The werewolf runs off. They explain they heard the bells, and Carolyn says that means her mother is alive. Barnabas opens the coffin, Julia sticks her head all the way in and pronounces Liz dead. Again. 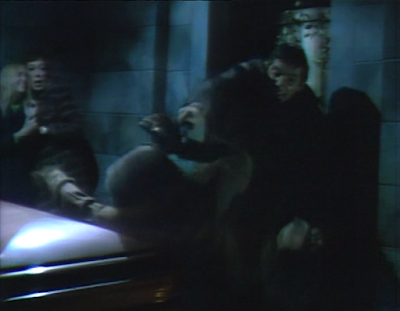 Back in Collinwood, Carolyn asks Julia what attacked her. Julia says she doesn't know, but they have to destroy it. Carolyn says it must be the same animal dressed as a man that attacked her mother and Joe. 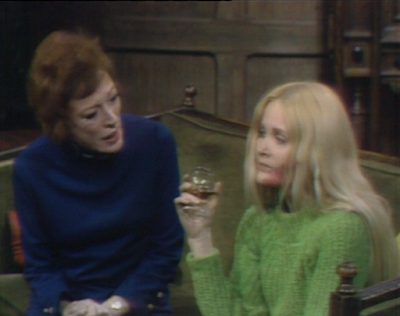 Barnabas asks how Carolyn fought the animal off. She says she put her hands up to protect herself, and her bracelet attracted his attention. Barnabas asks to see it, and notices that it's silver. He points out that the head of his cane is silver, too. Julia asks what he's getting at, and he tells her he's not certain. 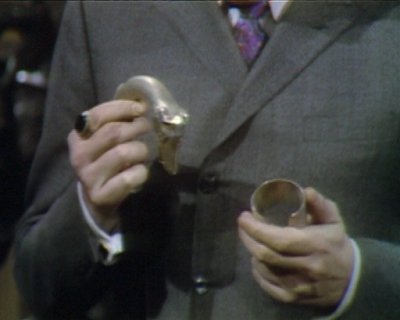 Carolyn asks how the bells went off. Julia says she can't explain it, but that her mother is dead. They hear the front door. When they go to the foyer, Liz is standing there. 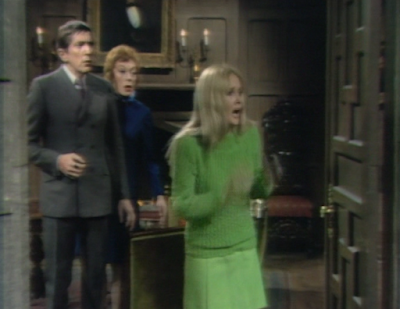 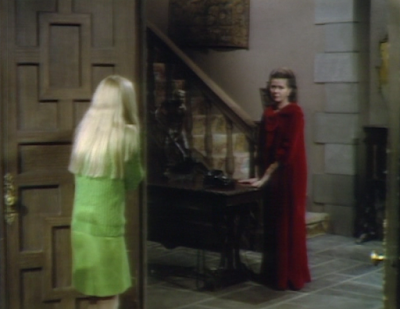 They help her into the drawing room. Julia checks her vitals and reluctantly agrees that she appears to be alive. Liz says that Cassandra put her under a spell. She tells the story of finding Cassandra with Tony Peterson, and how when she threatened to tell Roger, Cassandra put a spell on her. She says that when she felt Carolyn was in danger, she had to react. She asks if Cassandra will ever return, and Barnabas assures her that she won't. Liz says she had a vision of a woman who looked like Cassandra consumed by flames. Julia helps her upstairs. 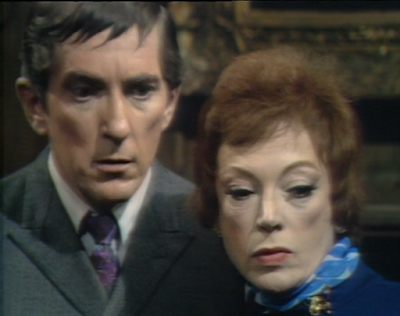 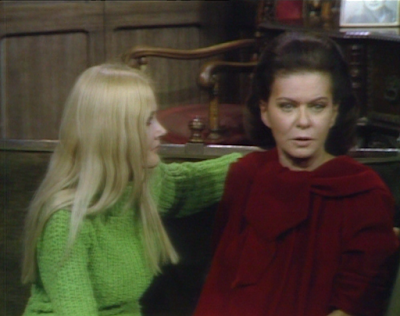 Barnabas warns Carolyn not to leave the house until the animal is caught. She tells him that she's worried about Chris, as the cottage had been ransacked. He tries calling the cottage, but there's no answer. He says he'll get Roger's gun and go check the cottage.

Barnabas gets Roger's gun, and also takes his cane as he leaves Collinwood. Julia comes downstairs and tells Carolyn she can see her mother now.

Barnabas wanders through the woods. He hears the werewolf, who then appears before him. He shoots the werewolf in the chest. It is knocked down, but it gets up and comes after him. 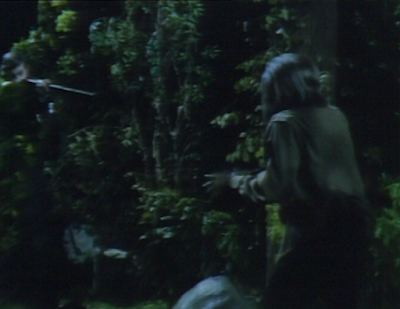 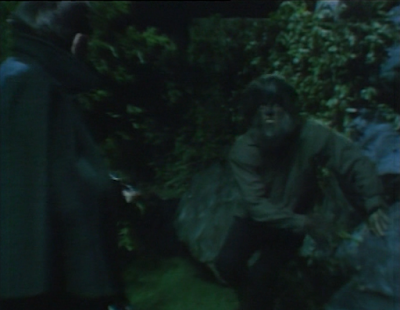 John: Well, that will go down in Dark Shadows' history as one of the most anti-climactic openings. Carolyn was within reach of the werewolf from the end of the last episode, and for inexplicable reasons, he dances around without attacking her. She then goes back out to the mausoleum. Why bother even have her returning to Collinwood? And what's the point of having a lock inside the mausoleum door if anyone could reach through the front and open it?

Christine: Why would the mausoleum lock from the inside anyway? I suppose they thought it would be suspenseful to stretch out the werewolf chase today, but it ended up feeling like they were trying to fill time in the episode. Carolyn must not pay much attention to what her boyfriend is wearing to not recognize his clothes on the Wolfman.

John: So where exactly on the estate were the bell towers installed? That was pretty epic bell-ringing to reach from the cemetery to the main house, particularly when connected to what appeared to be a standard doorbell.

Christine: It was all part of Liz's mausoleum design.

John: I just about died when Julia crawled headfirst into the coffin to check on Liz. Is this the third time she's incorrectly pronounced her dead? I love when she finally admits that Liz is alive, after Liz shows up back at the house. 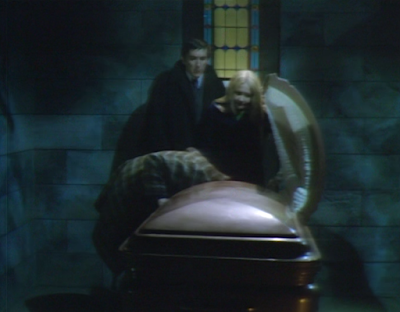 Christine: That amusing image ranks right up there with Jeff Clark's goofy first appearance and Naomi's dream of ripping off a bloody mannequin arm. I've lost count of all the people Julia has declared dead that have returned to life, though since Liz repeatedly stated it would happen, I would have expected her to use a more reliable device to certify death than by laying her head on the victim's chest.
Posted by John Scoleri at 6:00 AM