Chris explains to Barnabas that he doesn't recall what happens to him when he's a werewolf. Barnabas says he almost killed him the other night with his silver cane. Barnabas brings Chris to the mausoleum, and leads him into the secret chamber, where he won't be able to harm anyone when he turns into a werewolf. Chris asks him who's buried in the coffin in the secret room. Barnabas explains that it's empty, but refuses to provide additional details. 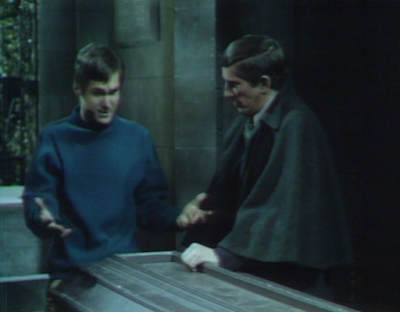 Chris asks why he's risking so much to help him. Barnabas says that he understands Chris is not responsible for what he does when he's a werewolf. Chris asks if he expects to bring him there every full moon, and Barnabas tells him that he will work on another cure. He asks Chris how long he's been going through the transformation, and Chris says it was seven years ago. 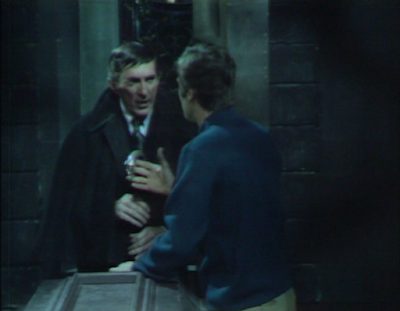 He explains that he had just turned 21, and graduated from college. One night, after sunset, he felt a great pain. He said it worsened, and then just stopped. He says he saw hair on his hands and face, and then blacked out. He woke the next morning assuming it was a nightmare, until he saw the evidence that suggested otherwise. 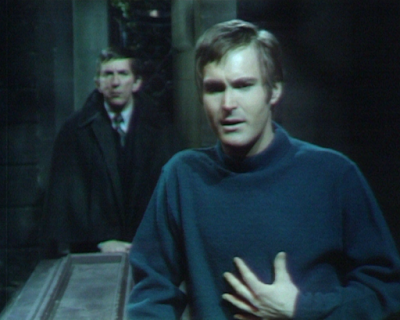 Barnabas explains that he won't be able to harm anyone tonight, and as Chris begins the transformation, Barnabas exits and closes the secret door behind him. 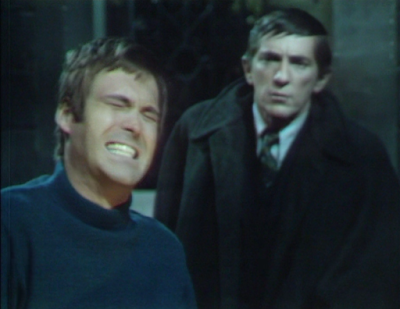 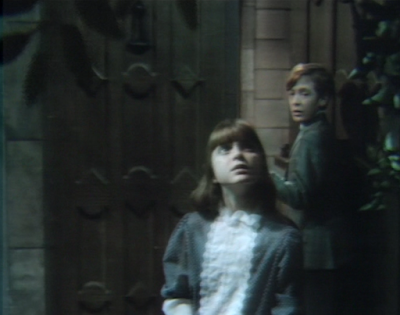 Barnabas listens at the secret door as Chris begins his transformation. He hears Chris growling on the other side.

Amy and David play cards when Mrs. Johnson comes in. They stop and stare at her, making her uncomfortable. She asks them why they're staring at her, and Amy says they got tired of playing cards. Amy tells her she looks pale, and when she says she's fine, David asks why she's so angry. She knows they're up to something. He tells her that she's not angry, she's just still frightened by the man she thought she saw at the cottage. She tells them the man was there and they both know it. She tells them to stop it right now, and then sends them to their room. They go upstairs, laughing. 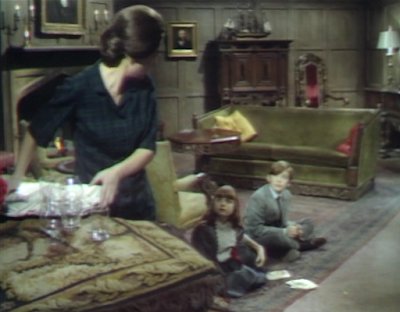 Barnabas returns to Collinwood and hears a crash. He goes into the drawing room and Mrs. Johnson tells him the kids are trying to drive her crazy. He asks what they did. She says a few night ago, she found the kids playing dress up and speaking strangely to one another. The following night, she saw a stranger at the cottage, who she was sure was going to kill her. Barnabas asks her to describe him, and she does, including his old style clothes. He asks what the children have to do with it, and she says she's convinced that the kids are responsible for that man's appearance. When they had been playing dress up, David was wearing the same kind of clothes as the man. 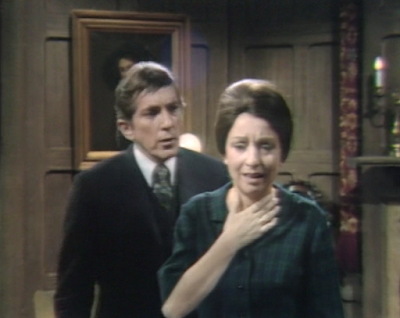 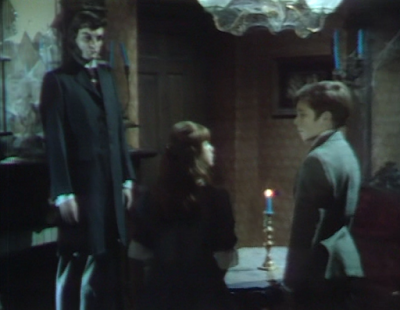 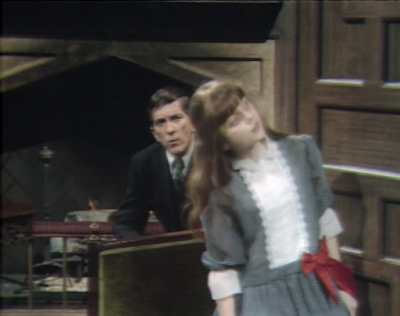 David asks Quentin where the bottle is, and a roll-top desk opens up on its own. David opens a drawer and pulls out a bottle of strychnine. David says it's poison, and that he won't hurt Amy's brother. He says it's wrong, and he won't do it for him. He runs out and Quentin pounds the hearth. 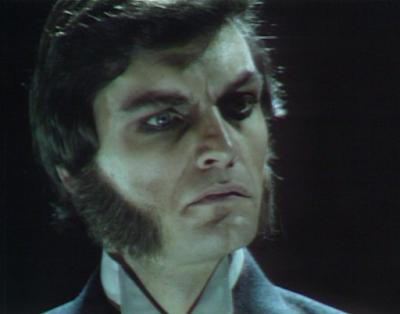 David comes downstairs, and Amy says it took him long enough. Amy asks why Quentin didn't want Amy to hear, and he says he doesn't know. She asks if they're going to play the game, and David says no. 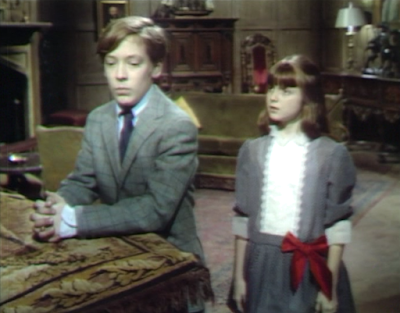 Quentin picks up the bottle of Strychnine. 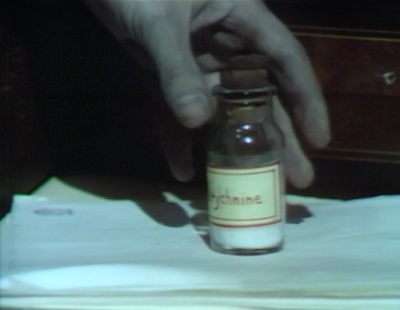 John: I wonder when Barnabas plans to share his secret with Chris. Then, and only then, can they truly become blood brothers.

Christine: They seemed to be bonding sufficiently over Barnabas' cane. 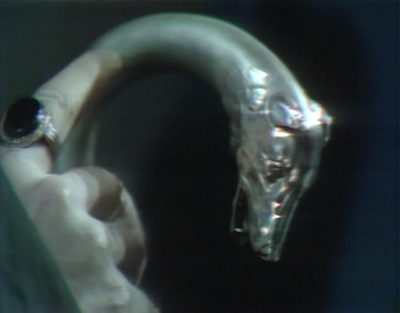 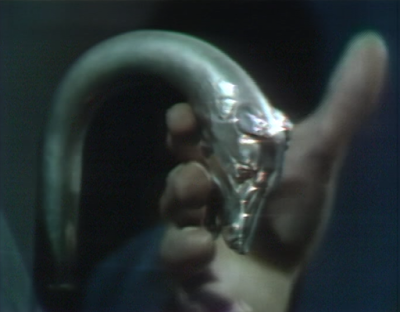 John: Poor Mrs. Johnson. I wouldn't be surprised if the kids do drive her crazy. Do you think her limited description means anything to Barnabas? As far as we know, he's got no personal history with Quentin Collins... yet.


Christine: He may suspect a ghostly influence on the children, though we'll see if he'll be able to keep a watchful eye on them while trying to find a cure for his new monster BFF. I wonder if this means he and Julia will reopen their basement lab.

John: Finally, a more telling interaction with Quentin. I hope I'm not disappointed the day we finally hear David Selby speak! I wonder why he wants to kill Chris Jennings...

Christine: Why does he want to kill Chris while Beth wants to save him? Now that he and Beth seem able to get around the estate, why doesn't he do the poisoning himself instead of asking a little kid to do it for him? 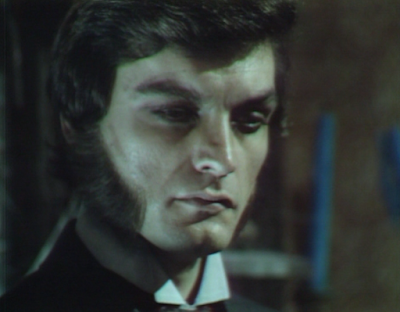 The scene where Chris tells Barnabas about his first transformation is one of the best in the series. Frid and Briscoe made the unbelievable grippingly plausible!